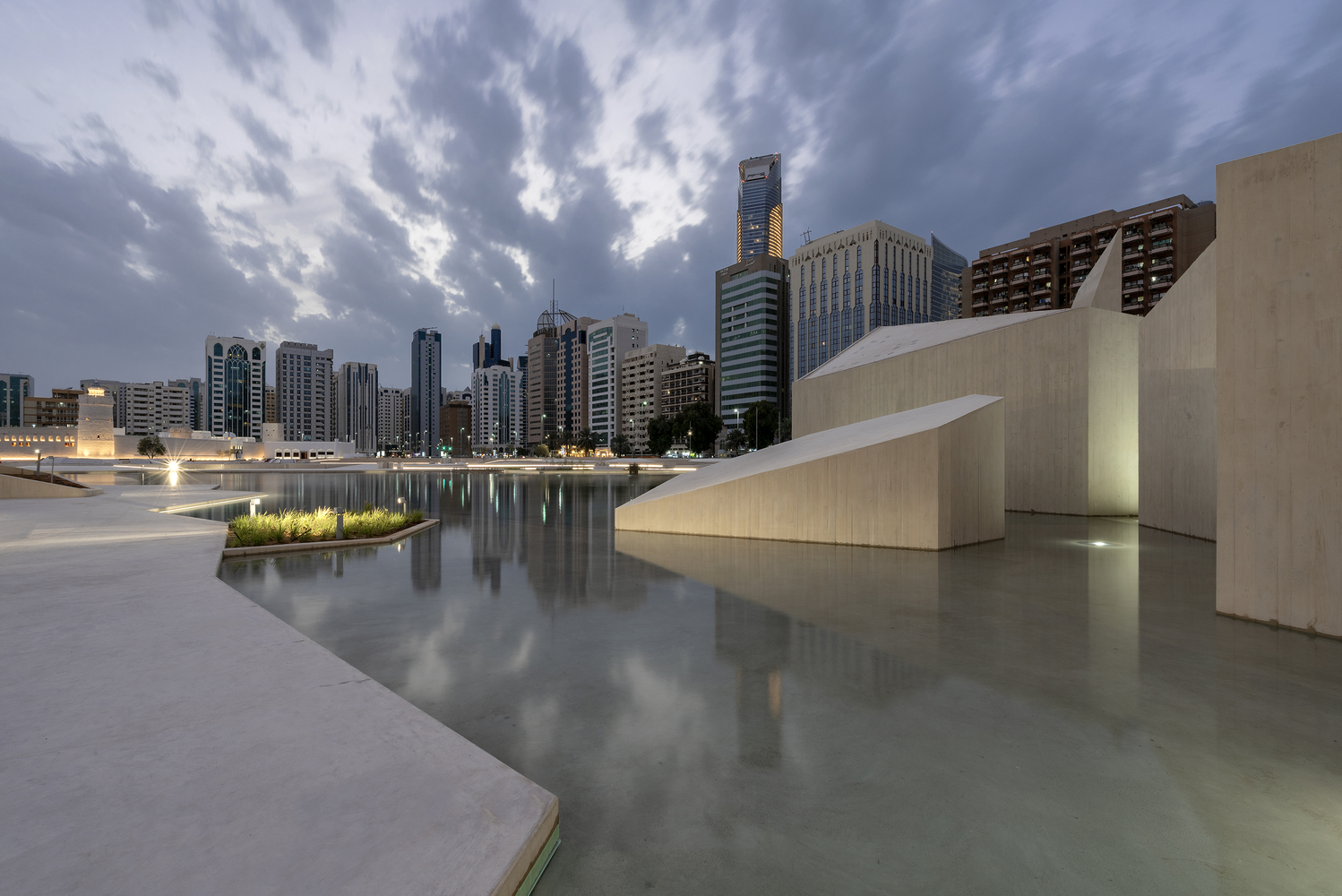 The new Musalla designed by Danish firm CEBRA Architecture as an important element of the masterplan commissioned by The Department of Culture and Tourism of Abu Dhabi, is located at the north-eastern corner of the Qasr Al Hosn site and features a series of small interconnected volumes that form a cave-like structure surrounded by water.

Danish firm CEBRA Architecture has recently completed a new 1,100 sqm Musalla in central Abu Dhabi, as the first phase of the transformation masterplan of the prominent site surrounding the Cultural Foundation, a listed cultural centre built in 1981, and the Qasr Al Hosn Fort, the region’s oldest and most important building. The latter was originally built in the 18th century to protect Abu Dhabi’s only freshwater well and later transformed into a royal residence and government palace.

Before the urbanization of the area, the fort was the first building travellers would see when arriving to the coast from
the desert: a landmark that seemed to rise as a magnificent sculpture from the desert sands. Together, the two buildings represent the historical and modern heritage of the city. The masterplan, consisting of a 140,000 sqm cultural park including the Musalla – a prayer hall slightly smaller than a mosque – will emphasize this duality by dividing the Qasr Al Hosn site diagonally into two contrasting landscapes.

On the one hand, a plain and flexuous desert landscape around the fort, reinstating the building as a freestanding landmark as it was before the modern city rapidly sprung up. On the other, a paved and programmed area with intensified planting around the Cultural Foundation combining the desert landscape with the modern city grid structure. The two landscapes will be connected through a public urban space, characterized by formations of cracks and irregular geometric shapes inspired by the distinctive mud crack patterns of the coastal desert landscape and salt flats surrounding the city. Along the transitional zones, the landscape will change from horizontal planes to slanting surfaces to gradually grow into actual buildings, culminating with the Musalla. All the components of the park will appear as natural landscape elements, leaving the fort and the Cultural Foundation as the two main visual anchors.

The Musalla is located at the north-eastern corner of the Qasr Al Hosn site and features a series of small interconnected volumes that form a cave-like structure surrounded by water. Water has been used by the designers as a symbol of purification and, at the same time, to create a subtle barrier to guarantee the privacy required by a sacred space. The individual volumes are connected by light-filled glass tubes bridging over water, which symbolically purifies the mind when moving from one area to the next. The building layout has been developed so as to create two mirrored flows, where female and male worshippers respectively progress along a sequence of volumes, each containing its own function.

Approaching the narrow passages between the individual volumes, the noise and bustling life of the city slowly fade away, allowing visitors to enter with equanimity the entrance halls, where they can rest and talk before praying in environments that refer to the Cave of Hire, where Prophet Muhammed received his first revelation. From here, they proceed to the ablution spaces for ritual washing and finally reach the large prayer halls, which are orientated according to the qibla in the direction of Mecca.

The geometric shapes of the landscape and buildings are mirrored in the interior as a suspended landscape of the same mud crack pattern that functions as skylights, which, whereas in the entrance halls and ablution spaces feature some concrete surfaces, in the prayer halls they are clad with copper, which creates endless reflections of light symbolizing the cosmos and reminding us how man has always looked up to the skies to wonder and reflect on his own existence. 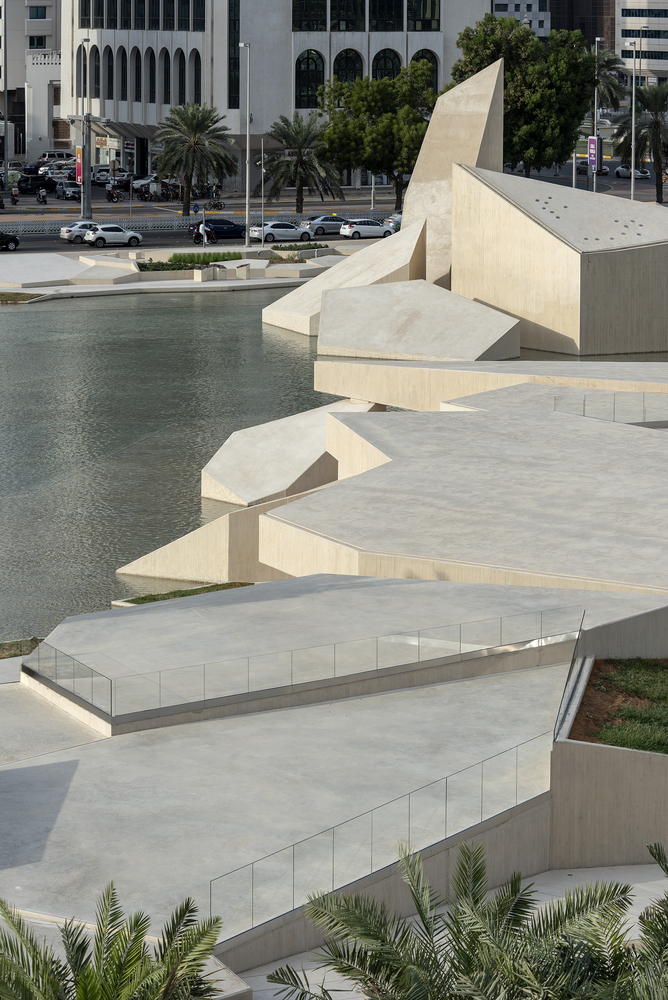 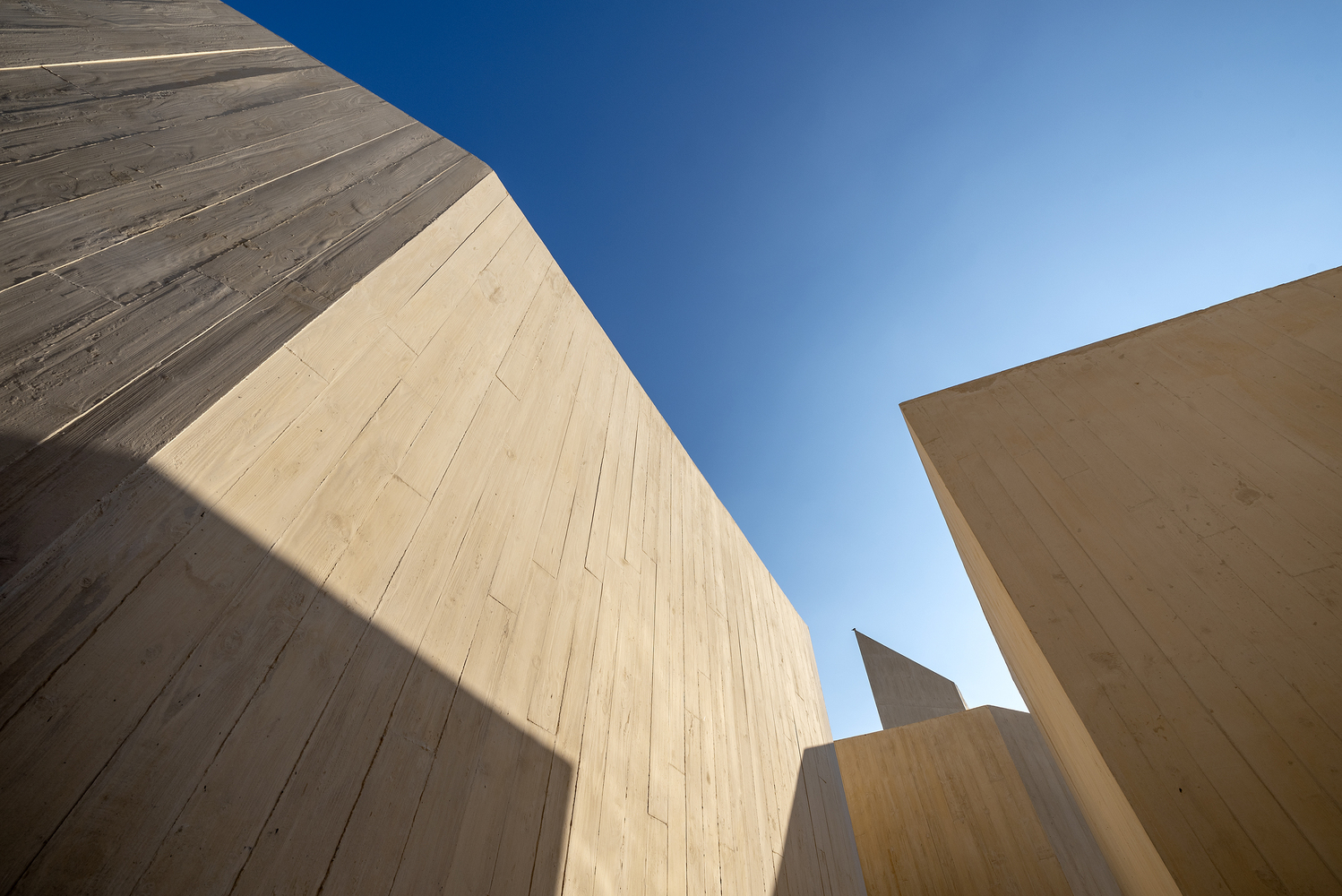 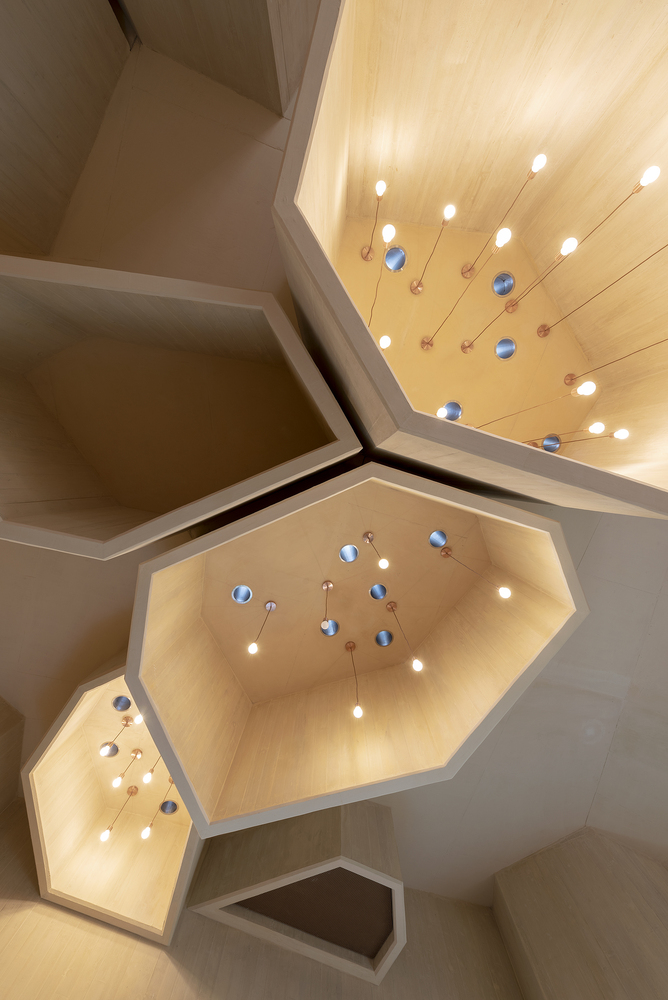 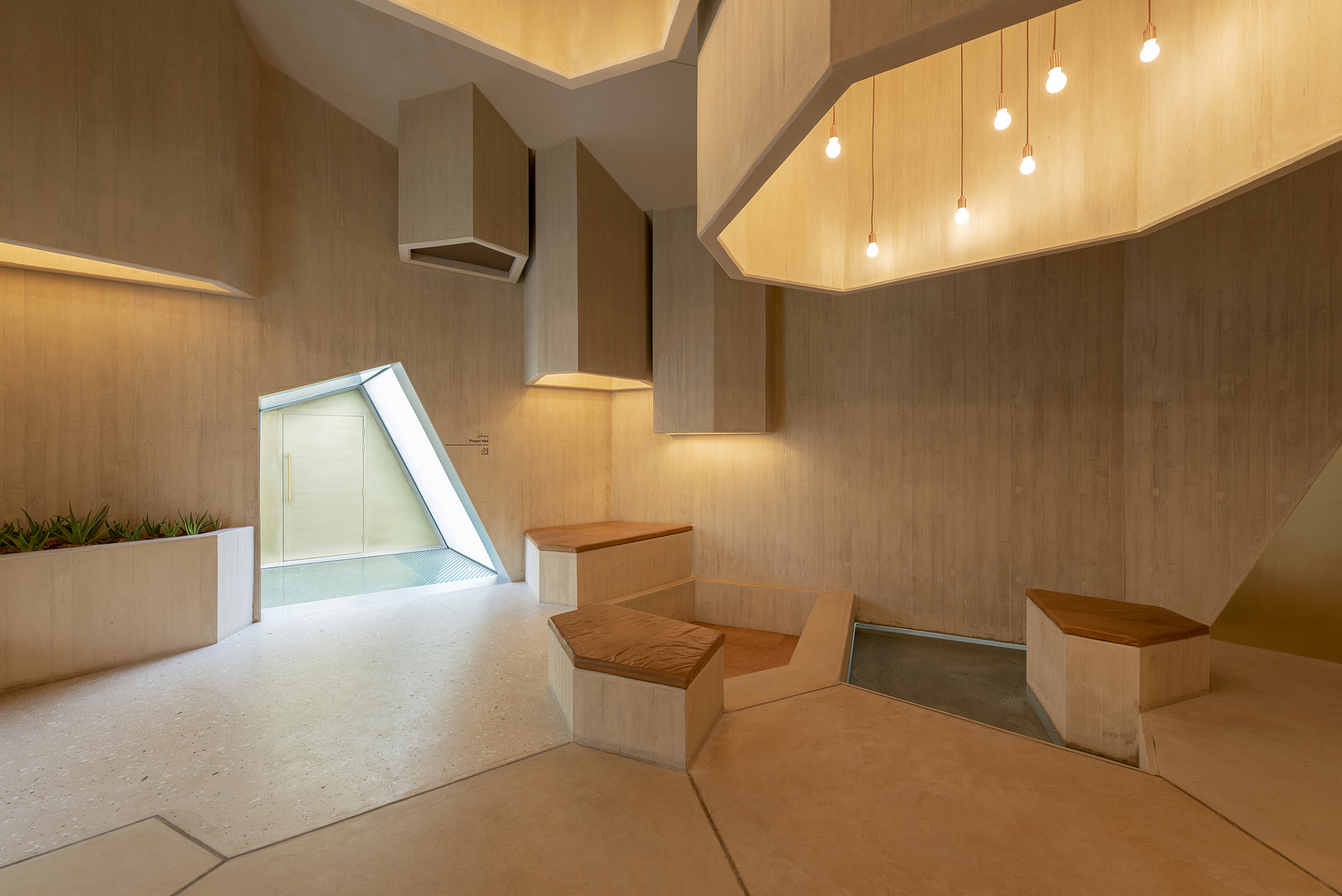 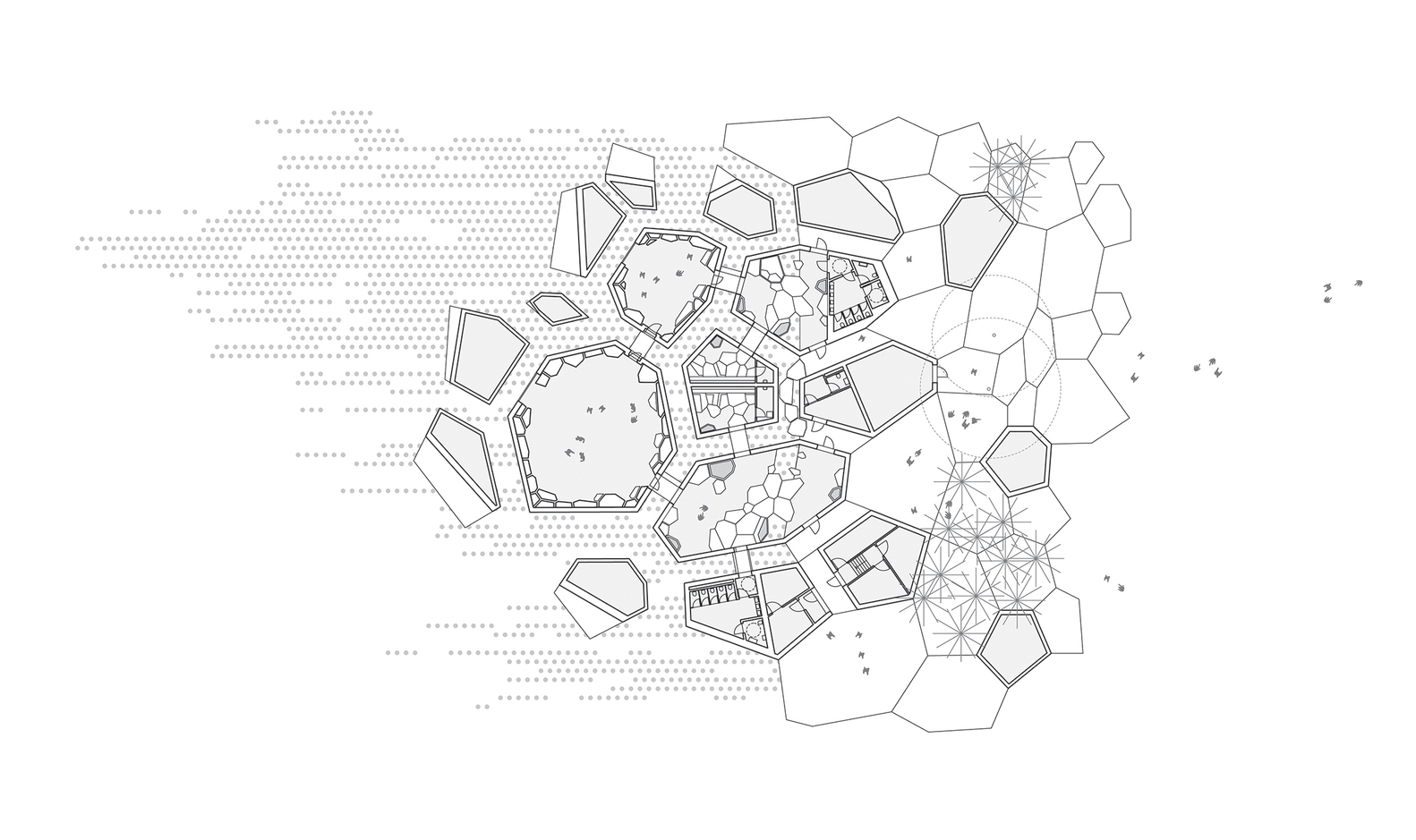 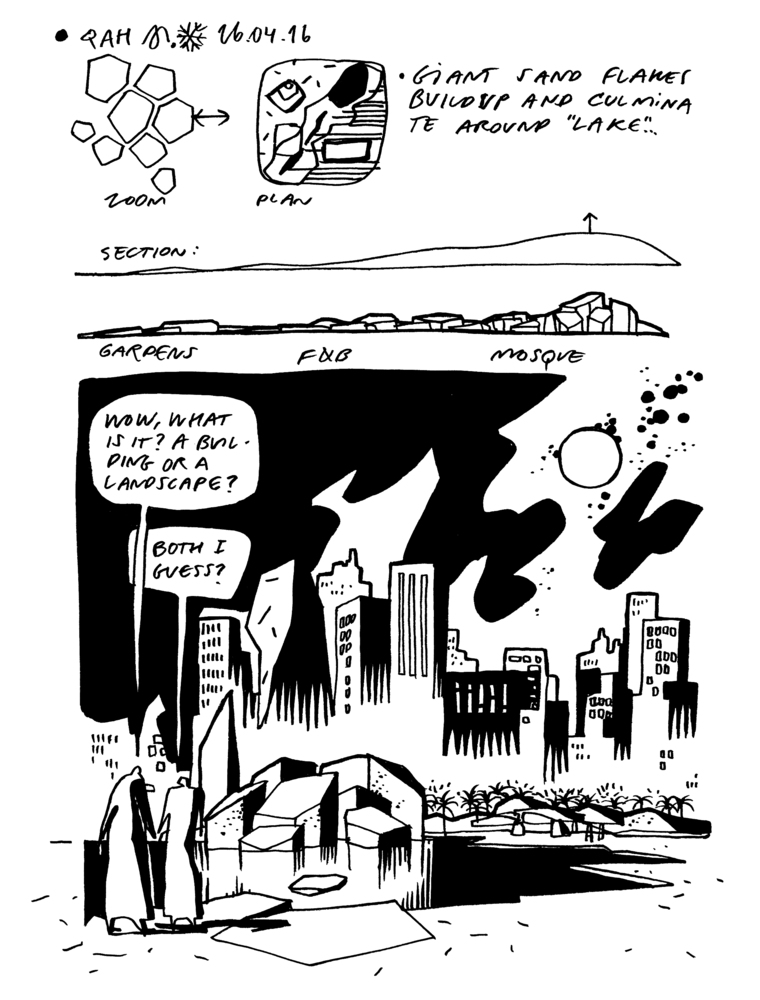 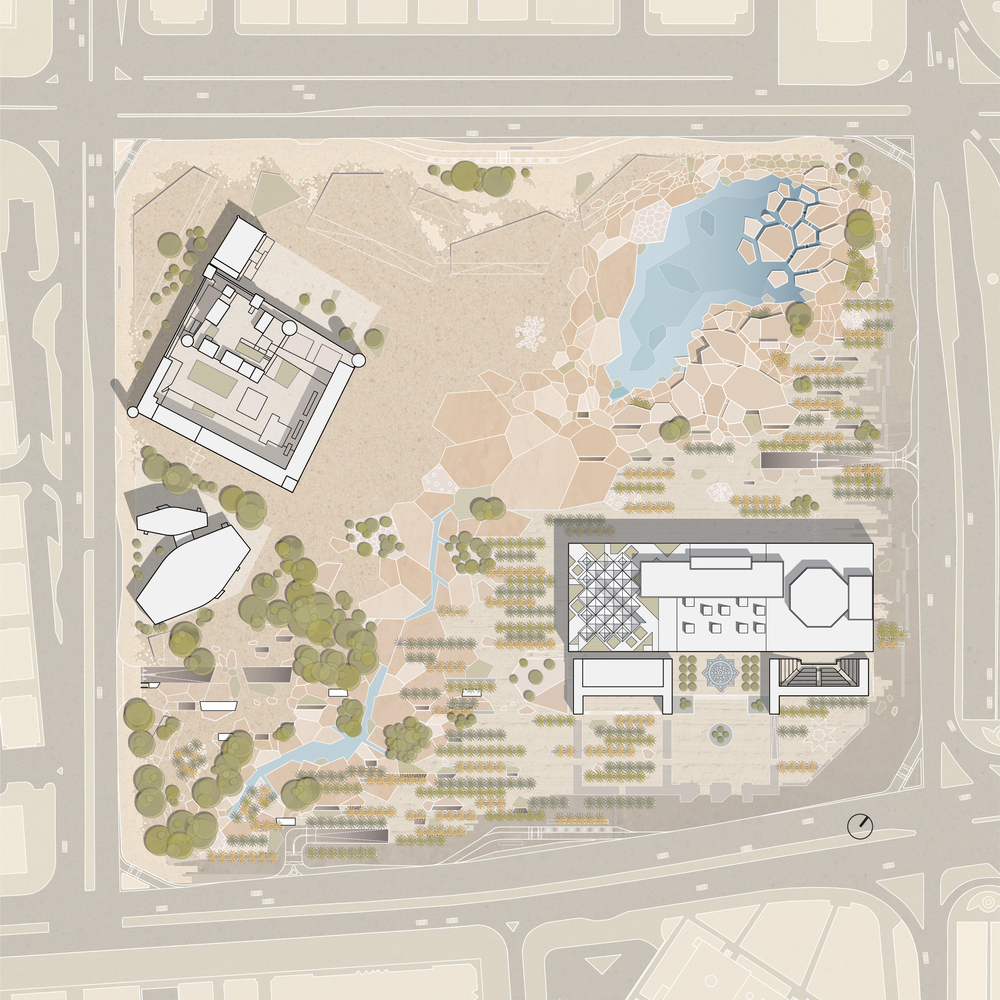 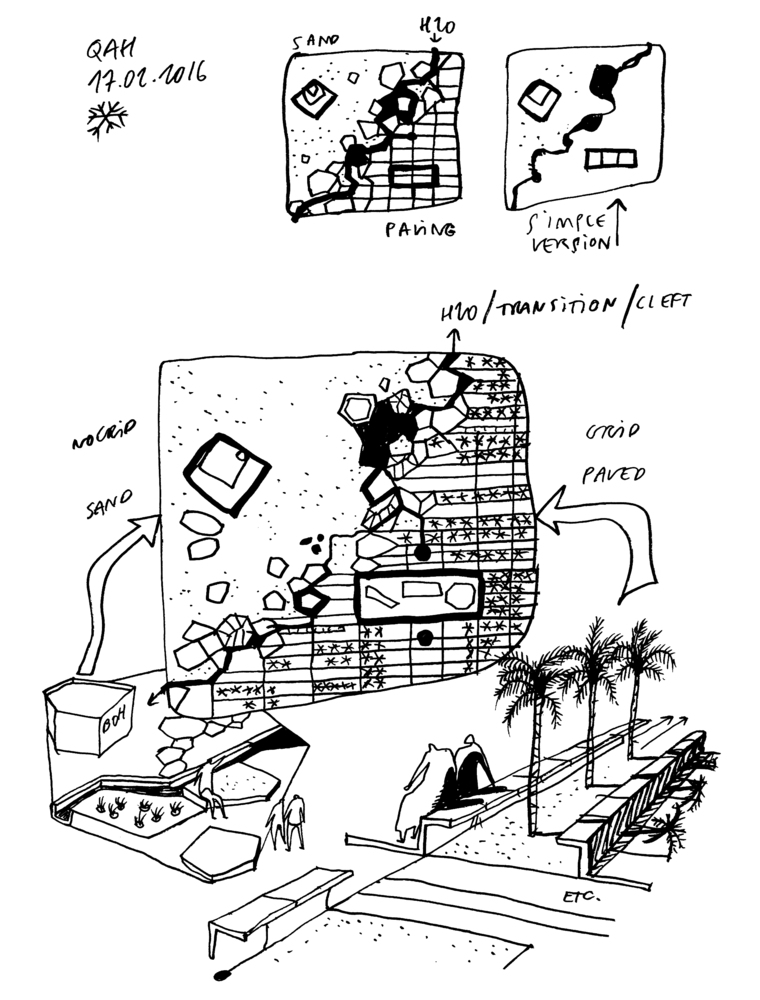