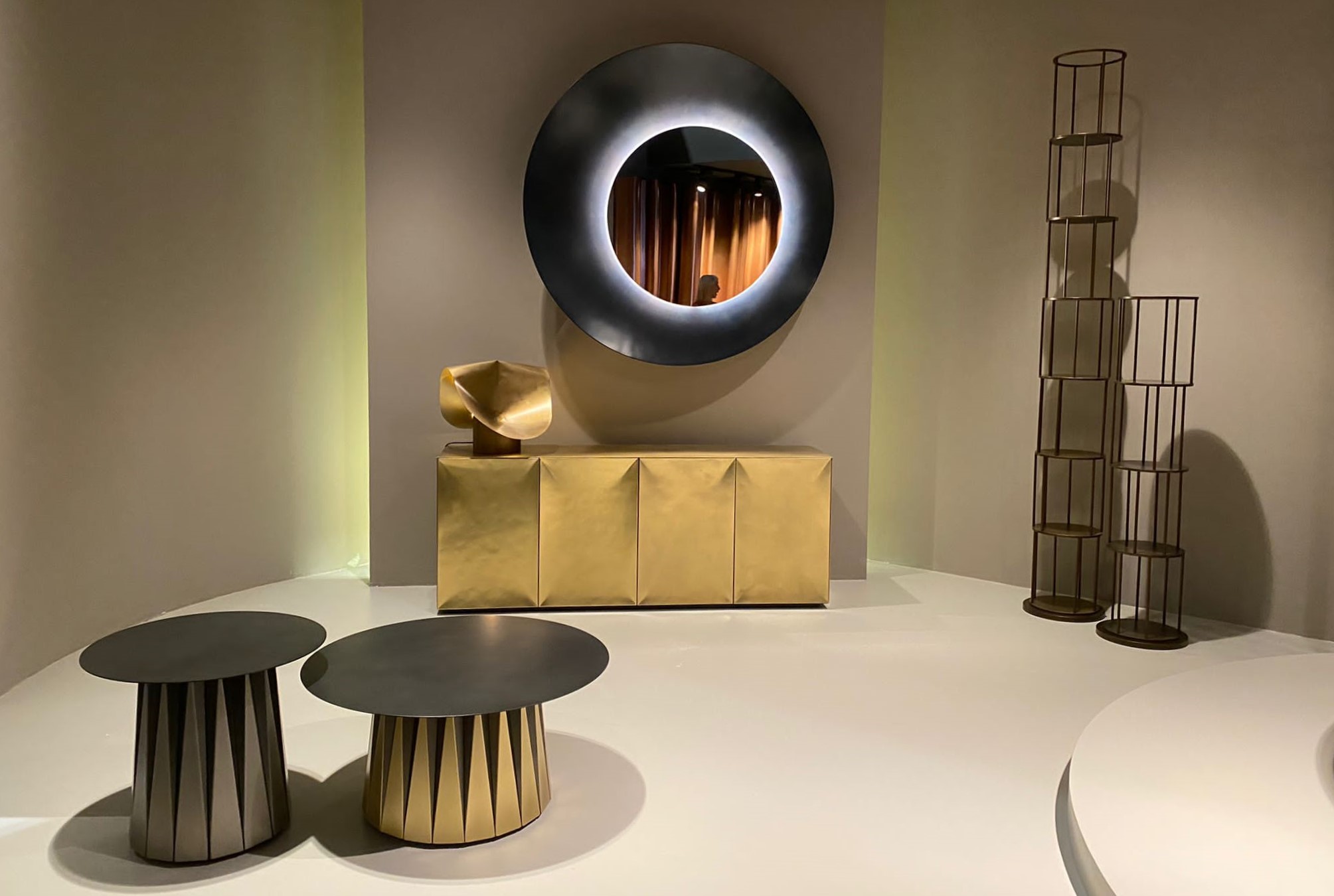 At its stand at Salone del Mobile 2022, De Castelli – the Italian company specialized in the working and production of
metal furniture and surfaces, whose mission is the experimental research – will stage the first act of a trajectory that will continue to be developed over the coming years. Through Biomorphic, it will introduce the organic, natural forms that have arisen from extensive research on long-forgotten artisanal techniques such as hammering, once used in the late 1800s, that have been ‘rediscovered’ and adopted thanks to cutting-edge technological processes and the help of rare machinery. The forms that result are both complex and created exclusively through the manual work of expert craftsmen.

These processes strengthen the unique bond between man and material that resides deep within all that De Castelli does, in closely monitored, certified processes that leave the task of expression to the material itself, highlighting how unique they are, recounting their specificity. It’s a trajectory that, with continuity and consistency, has led the company to become a preferred partner in the design world, no matter how large or small the project, in terms of the use of copper, brass and steel.

The stand in pavilion 15 is defined by the large ovoid shape of Ambrosia, a brass desk designed by architect Roberto Nicoletti which embodies the tireless effort that goes into crafting curved surfaces. This technique creates soft, organic forms and generates the magical reflection of light along the brass surface, offering an almost metaphysical vision of the object. Ambrosia is furniture designed for the hospitality industry: a cut in its ovoid form introduces a table top, which defines its role as a desk.

The stand also presented the new furniture complements made in collaboration with Adriano Design, Francesco Forcellini, Luca Pevere, Martinelli Venezia, Elisa Ossino, Stormo Studio, and Zanellato Bortotto, the fruit of constant dialogue between the company and Italy’s most interesting designers.

In its Milan Showroom, De Castelli presents the Tracing Venice exhibition, a tribute to the unique city of Venice and the precious mosaics of Saint Mark’s Basilica. Inspired by the photographs of André Bruyère on the mosaics of St. Mark’s, designers Zanellato/Bortotto conceived a symbolic transposition of the lagoon city, which De Castelli translates into six extraordinary wall tableaus made of copper, brass and steel mosaics and treated with oxidisation, brushing and erosion processes. These tableaus perfectly demonstrate the company’s research and expertise in metalworking.

Generating unique effects of depth and relationship with light, each tableau tells a story that makes the imperfection of the material a fundamental element. They evoke the fragility and deterioration of the Venetian context and prompt reflection on the importance of an asset to be preserved at all costs. With this project, De Castelli uses its applied research to push the boundaries of experimentation, uniting cutting-edge technology with fine craftsmanship for unprecedented and exclusive results. The uniformity and continuity of the oxidations and tones was only possible through in-depth investigation of the narrative potential of metals, carried out through countless tests and verifications.

I GIGANTI (THE GIANTS)

De Castelli transforms and clads the eight central columns of the main courtyard at the University of Milan, interpreting the designs of Antonio Marras with its metals and exclusive finishes. I Giganti (the Giants) by Antonio Marras and De Castelli launches the Design Re-Generation exhibition at the University of Milan through a parade of characters that reference the culture and history of Sardinia, standing out on the colonnade of the Courtyard of Honour in memory of and as a guide to ancient know-how. The figures arose from the artist’s imagination: after meeting with Albino Celato, Marras was inspired by the De Castelli workshop, its materials, working techniques, and finishes, and by the innovative technology and equipment used by such a state-of-the-art company.

The eight stone columns are wrapped in a layer of exquisite metals: two steel semi-cylinders create the backdrop for brass and copper figures that, after being laser cut and rolled, are then given their final texture and traits, with precision and meticulousness, through oxidation and corrosion, the maximum expression of De Castelli savoir-faire. Once those processes were completed, Antonio Marras intervened personally with precise artistic applications of an oxidising solution, enhancing the unique character and craftsmanship that distinguish the company’s approach and the entire custom-made installation. 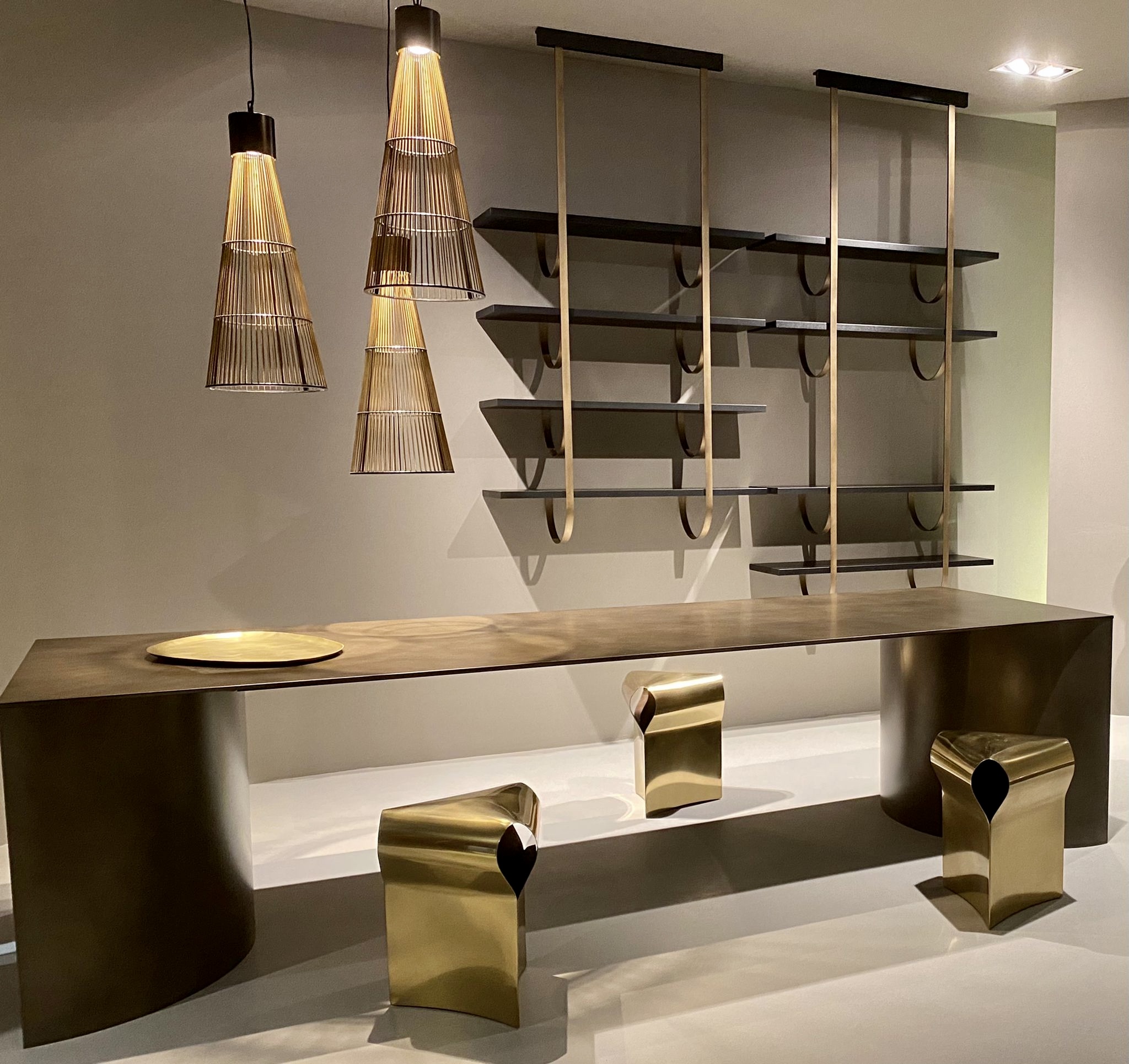 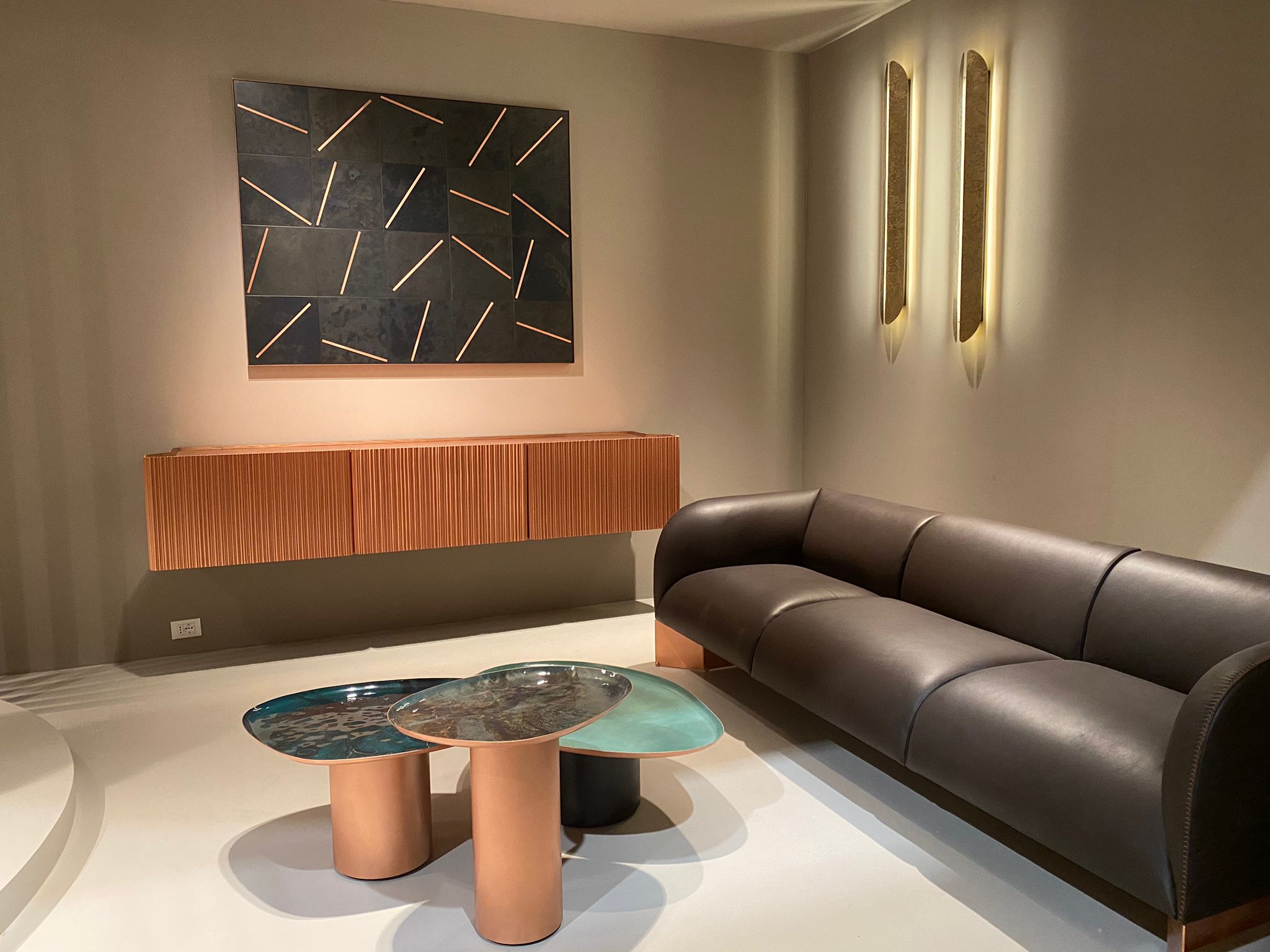 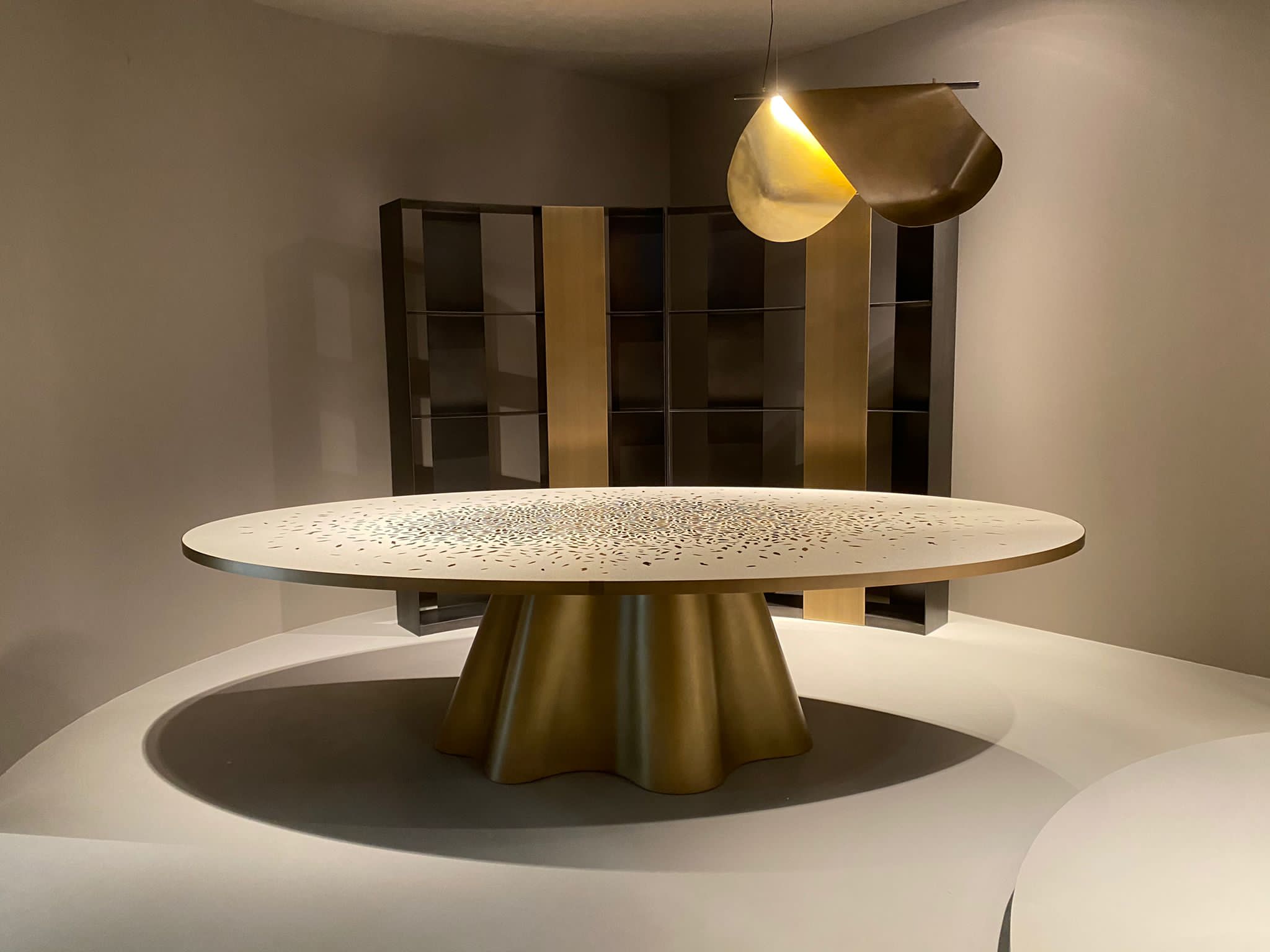 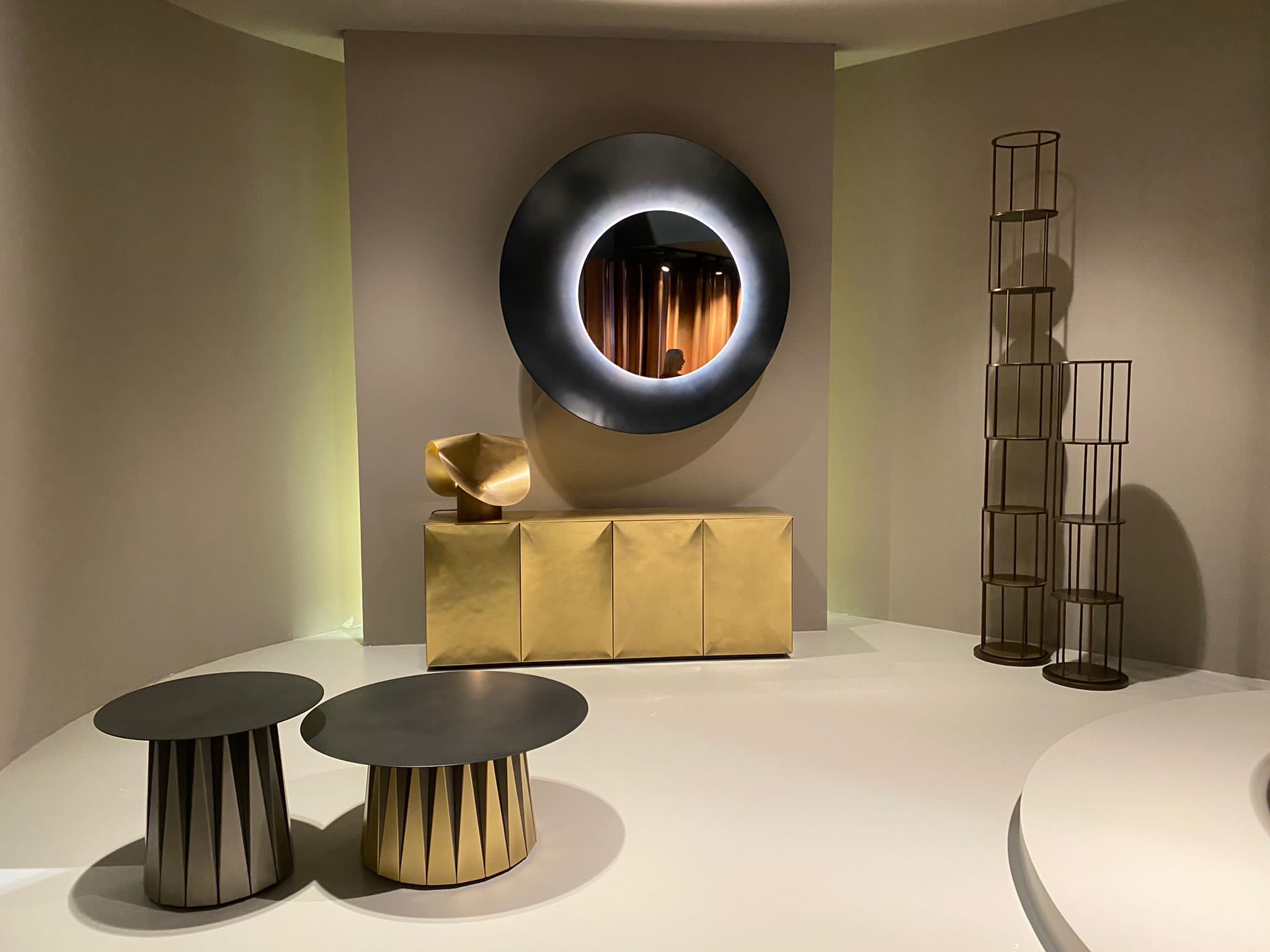 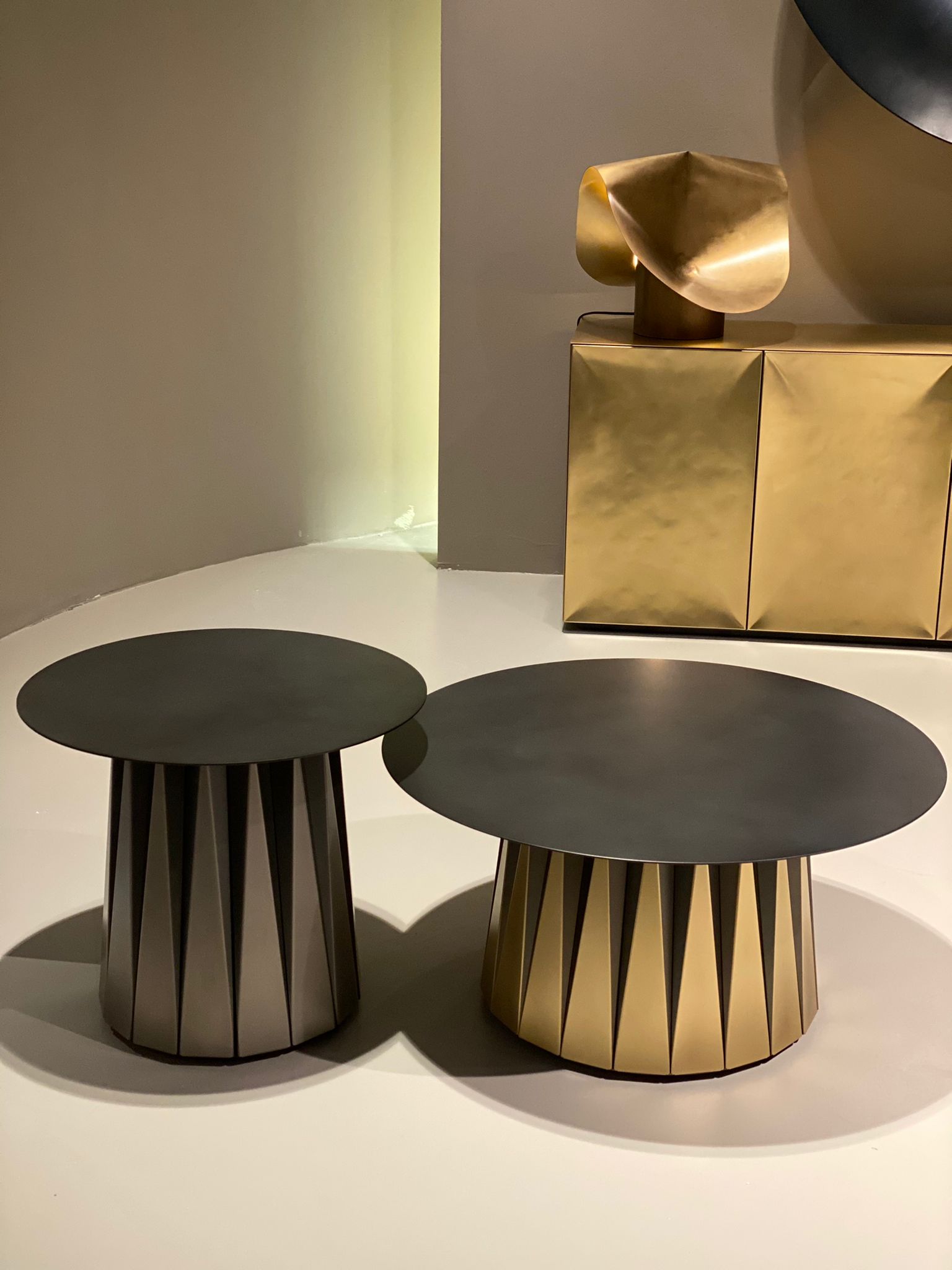 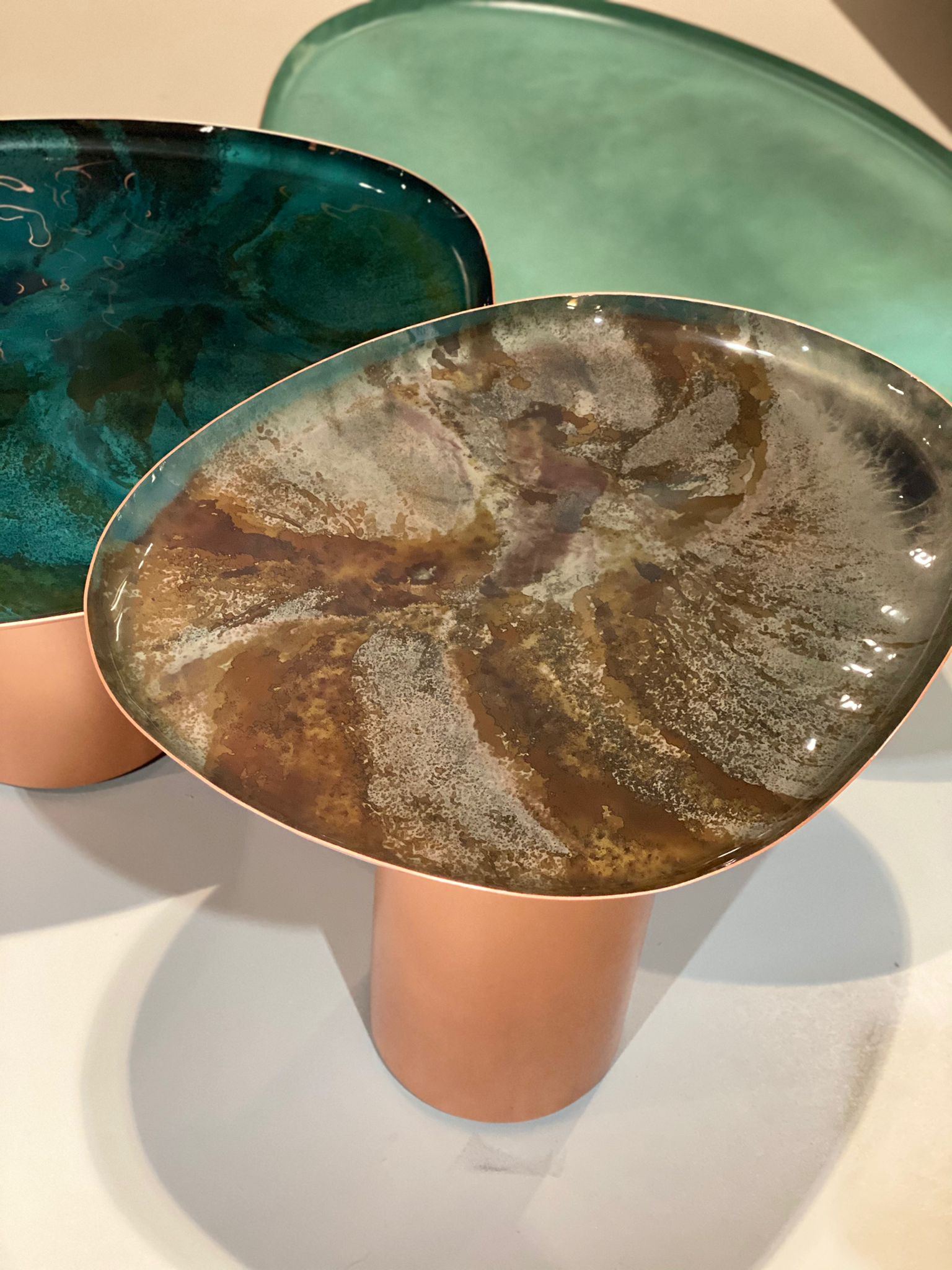 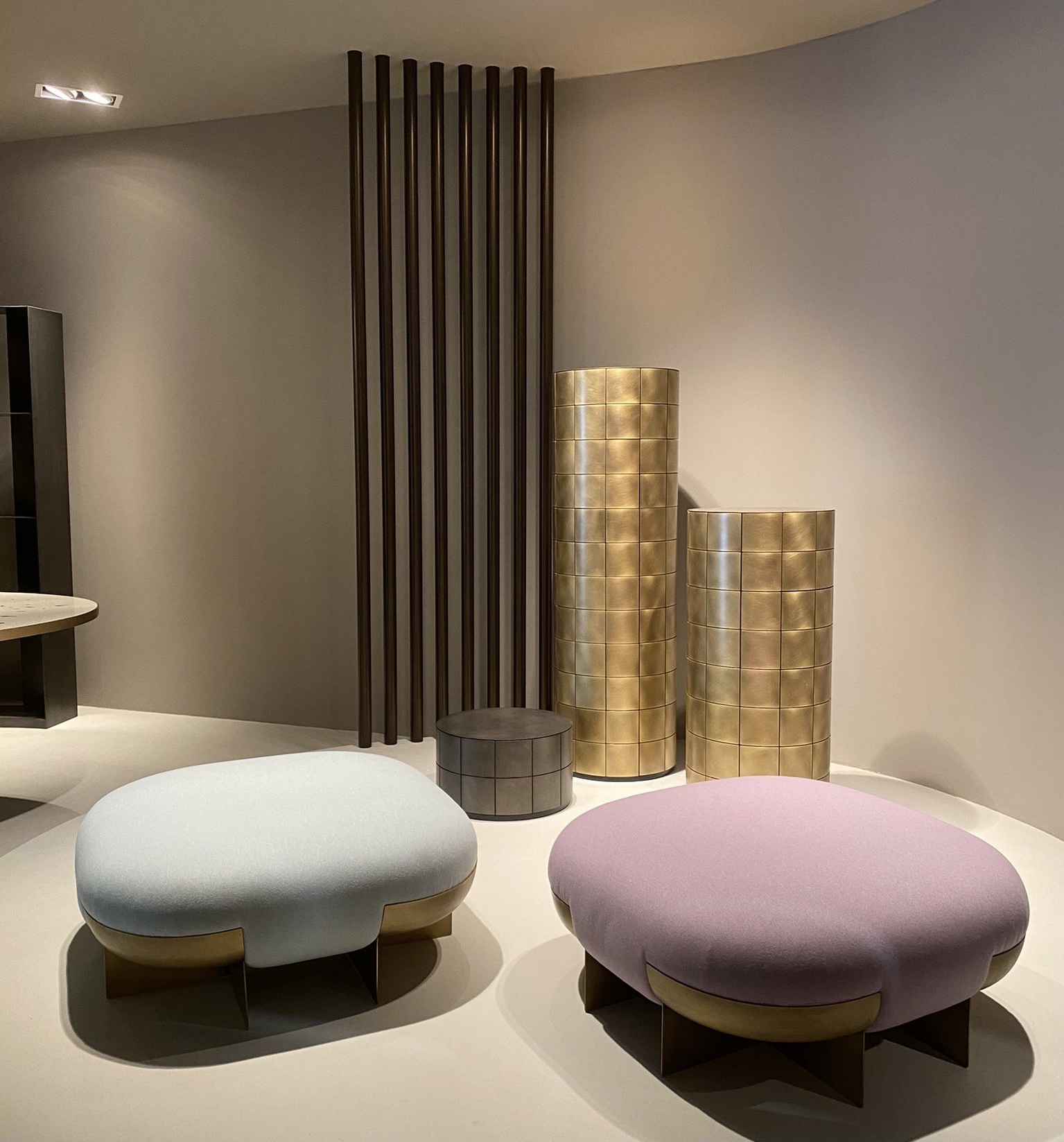 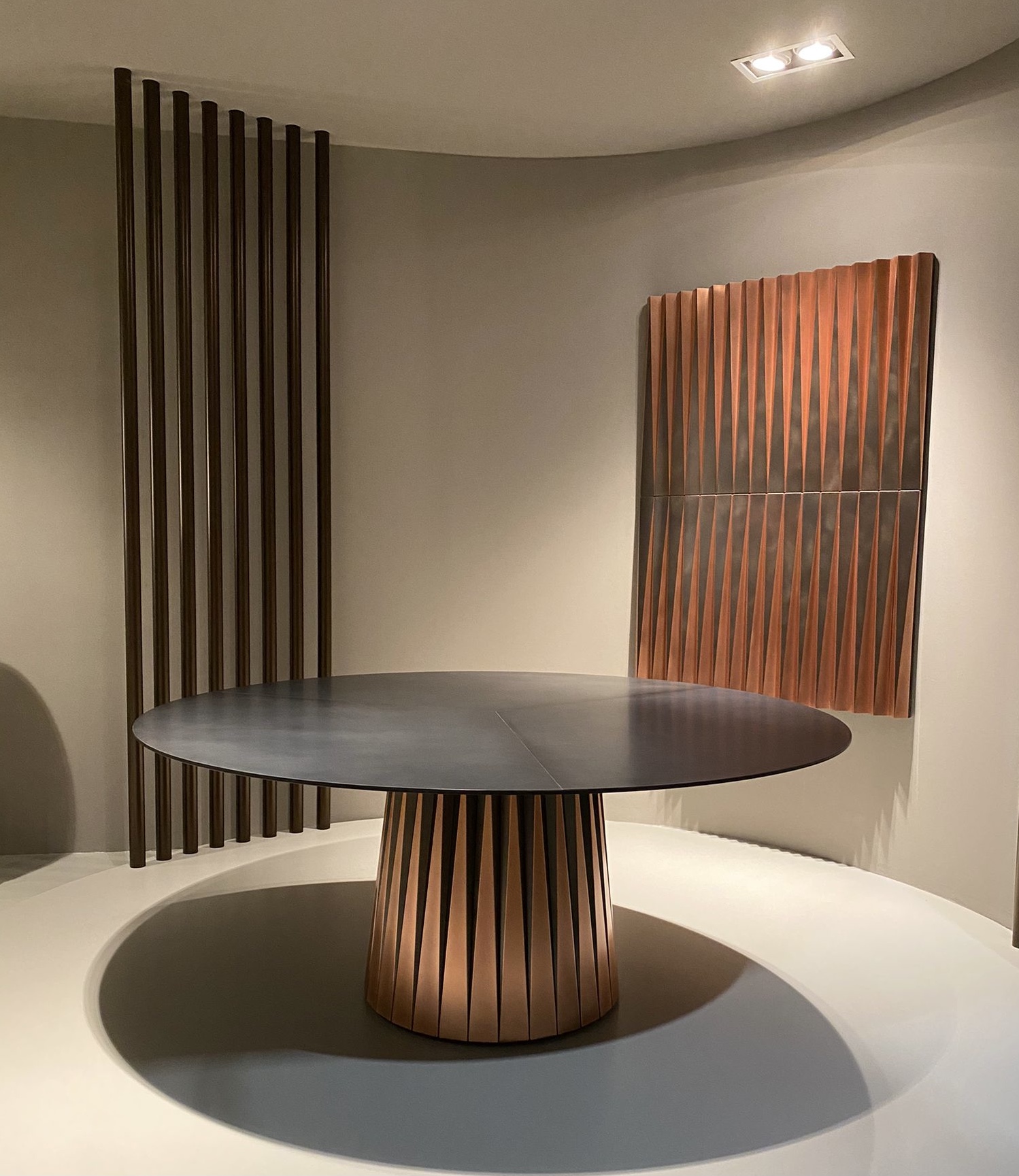 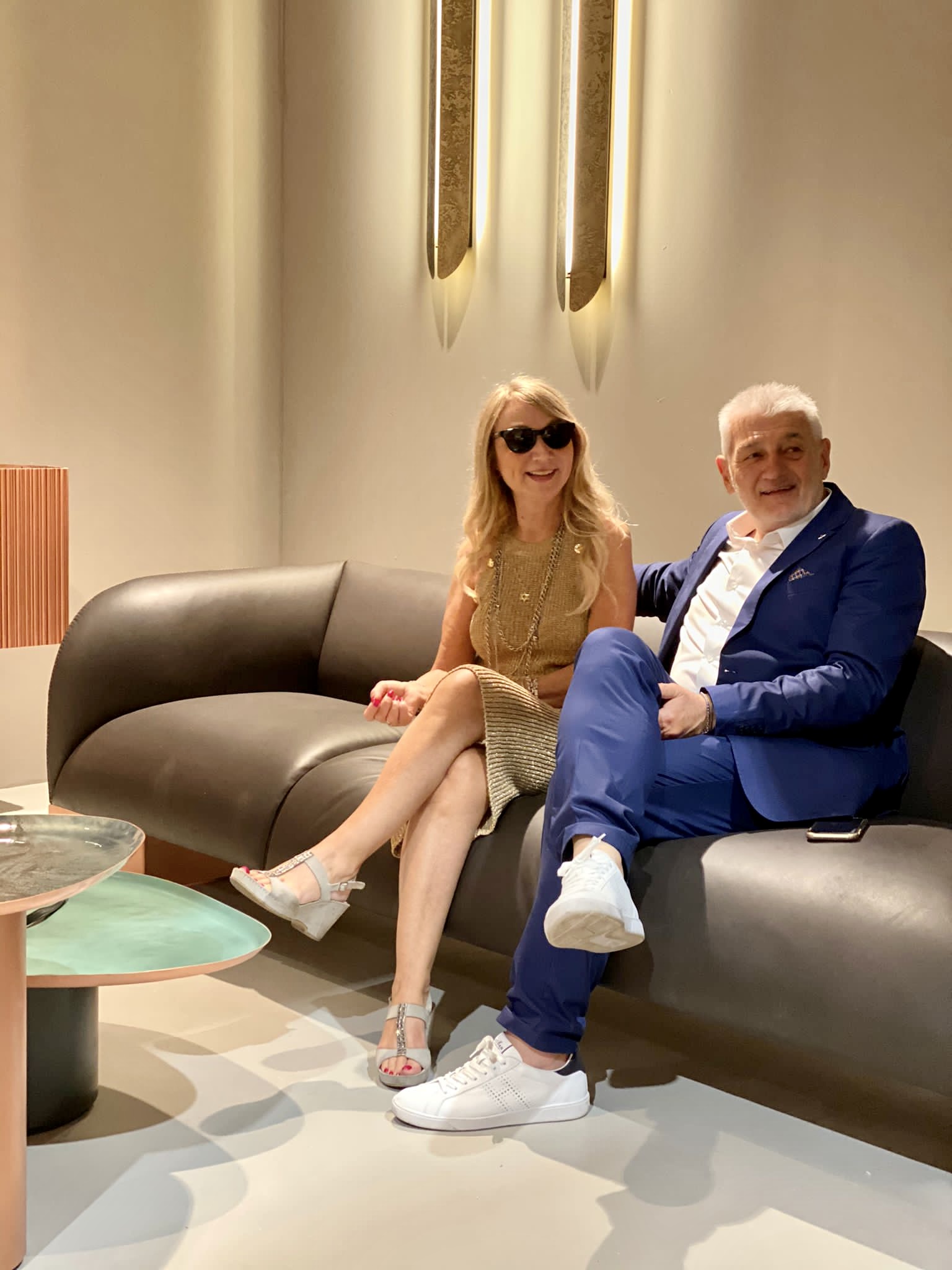 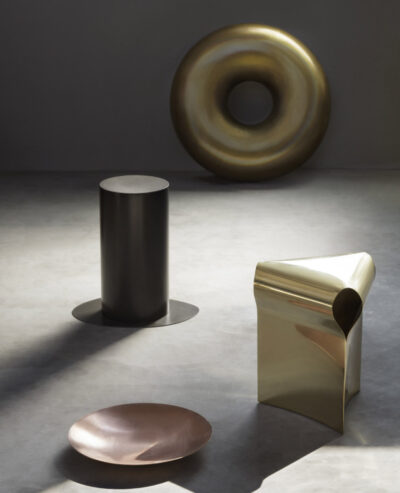 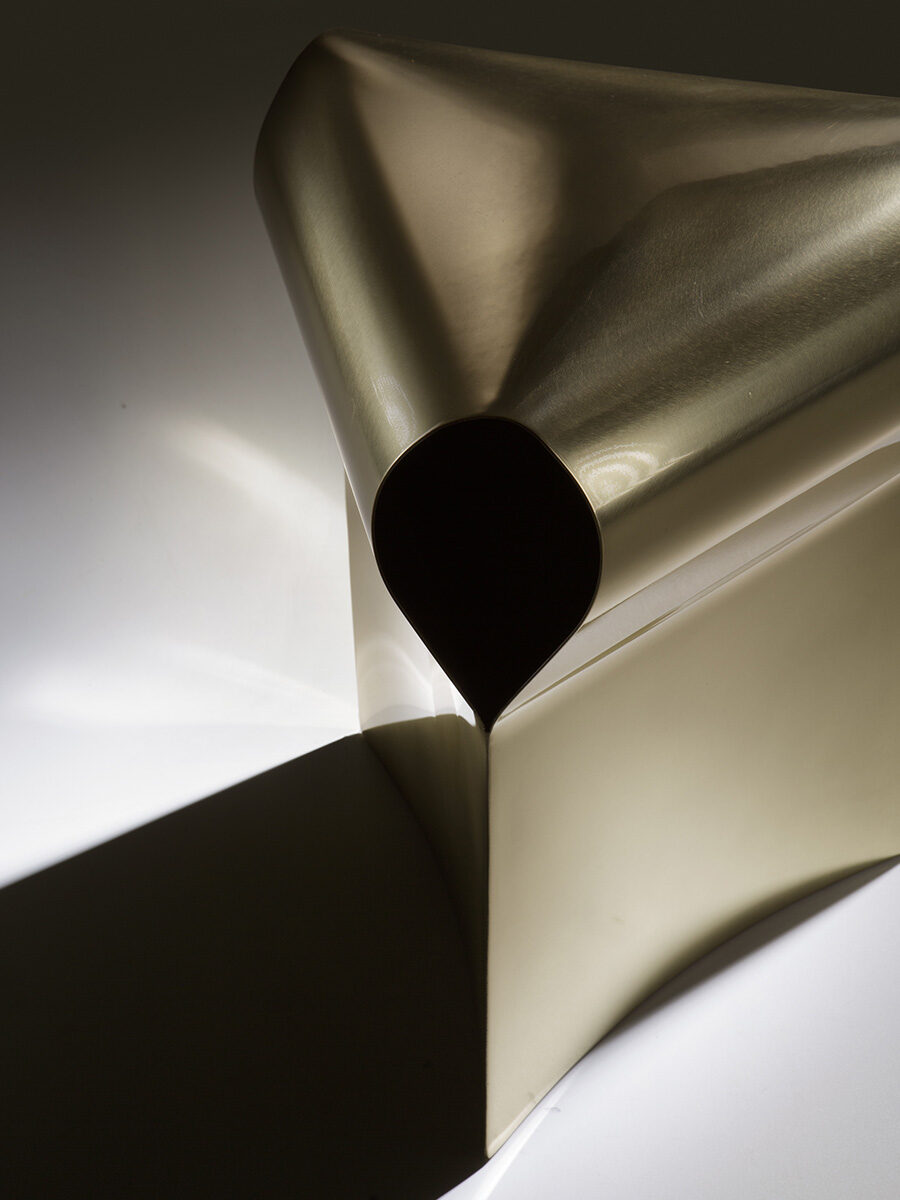 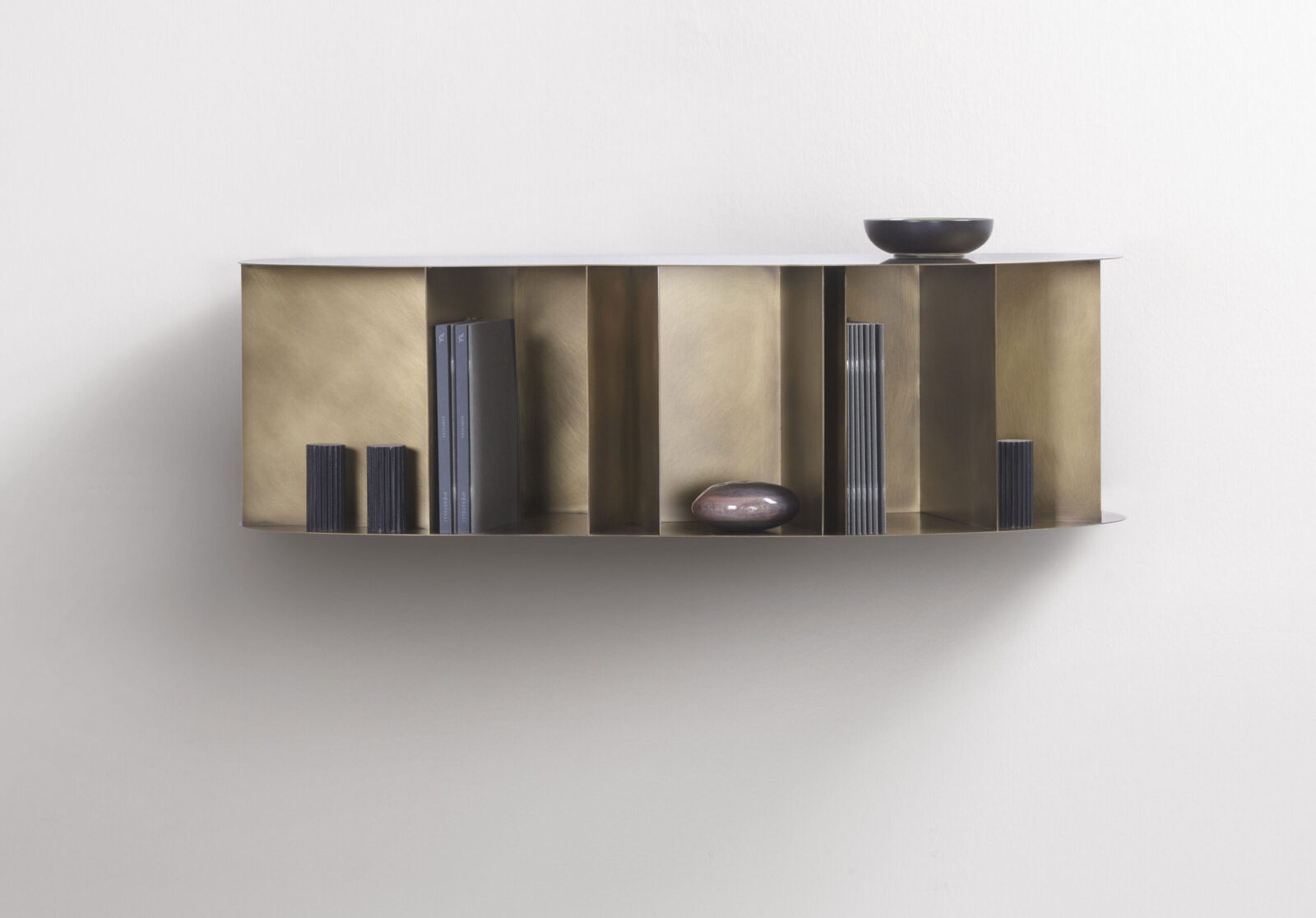 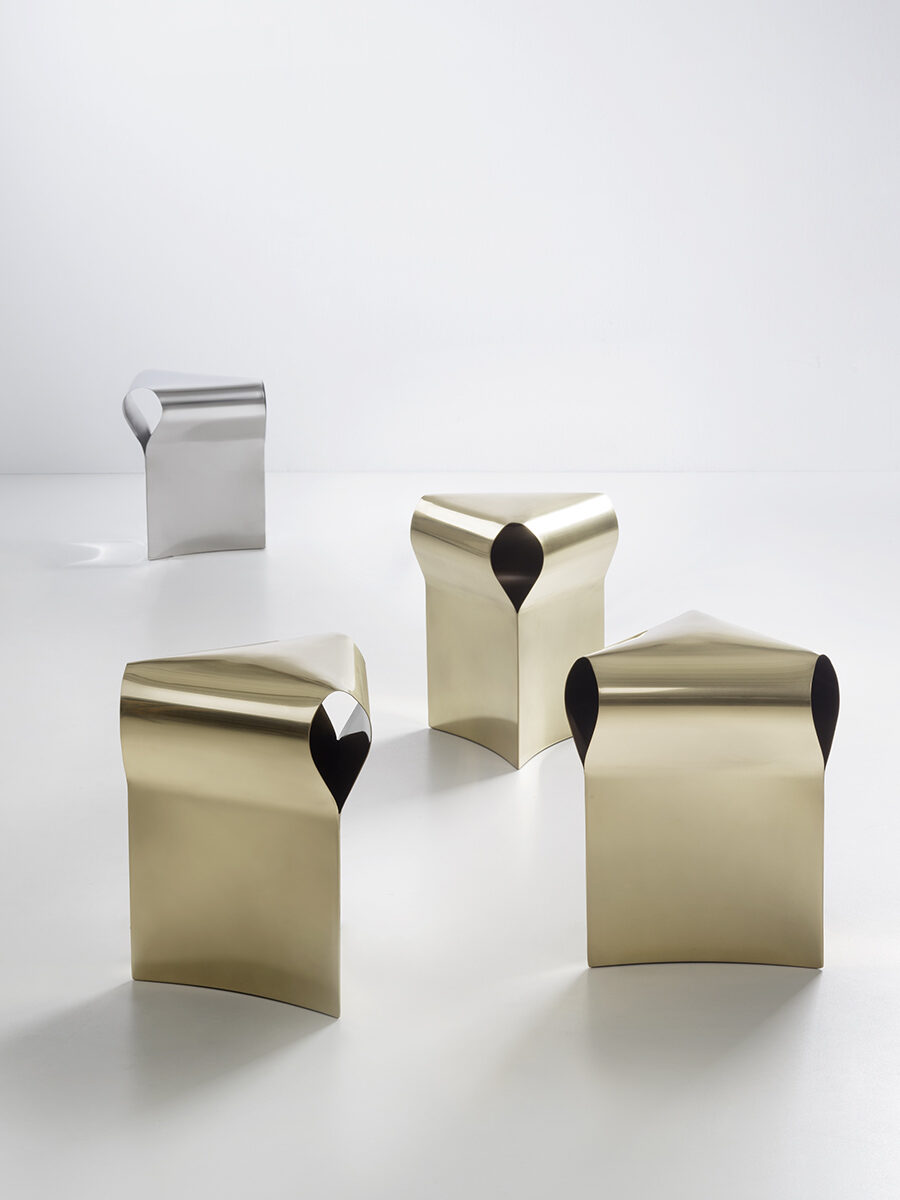 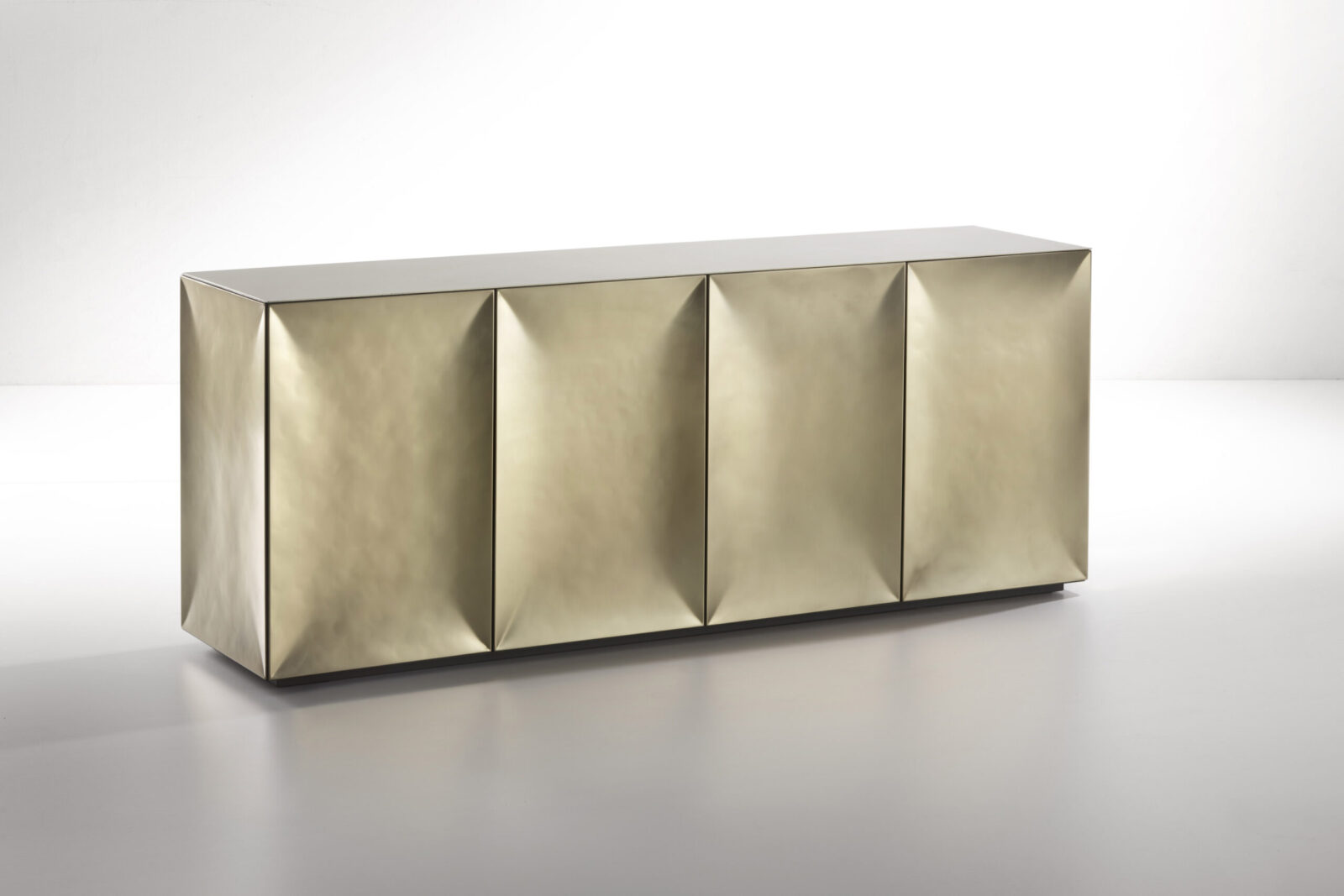 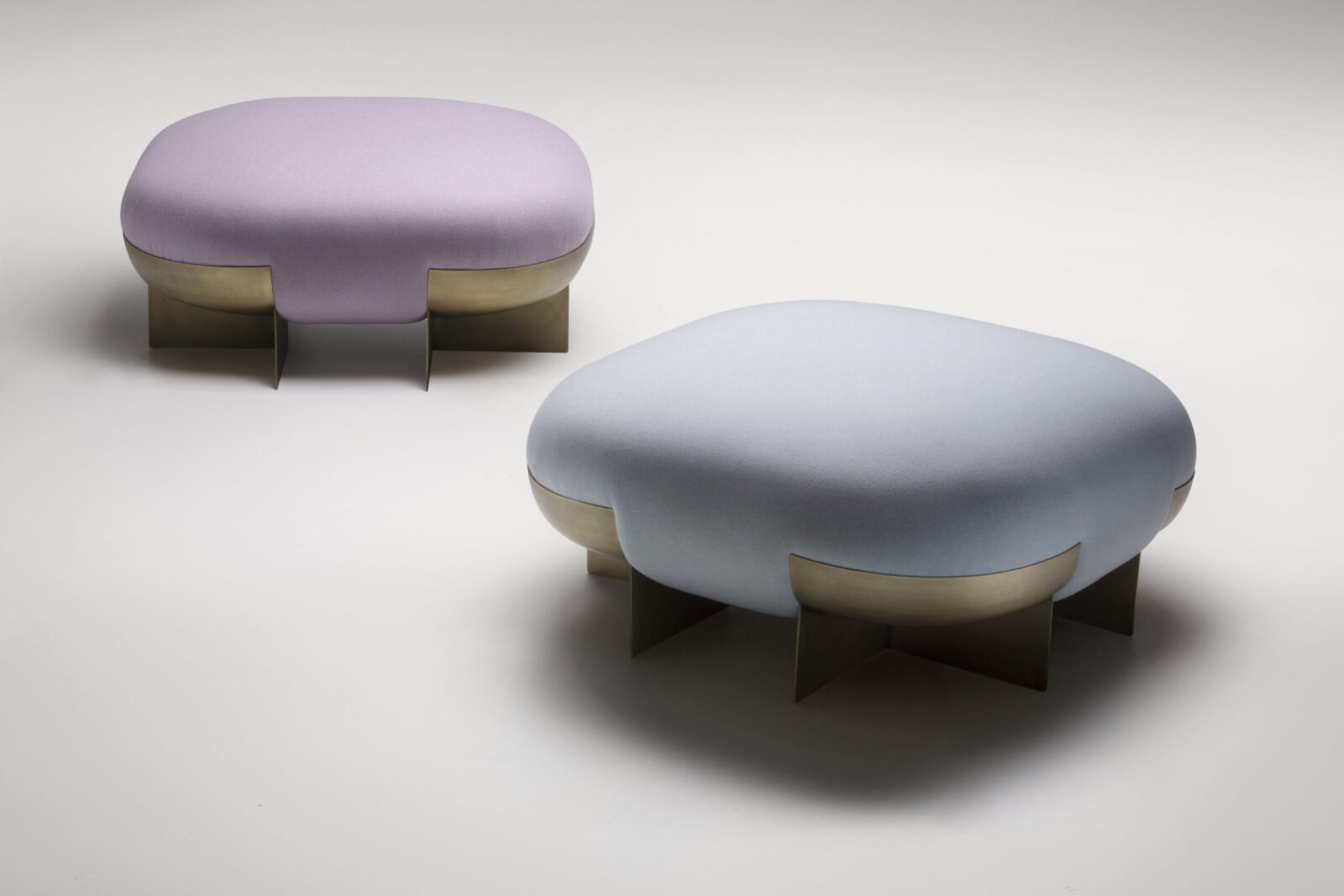 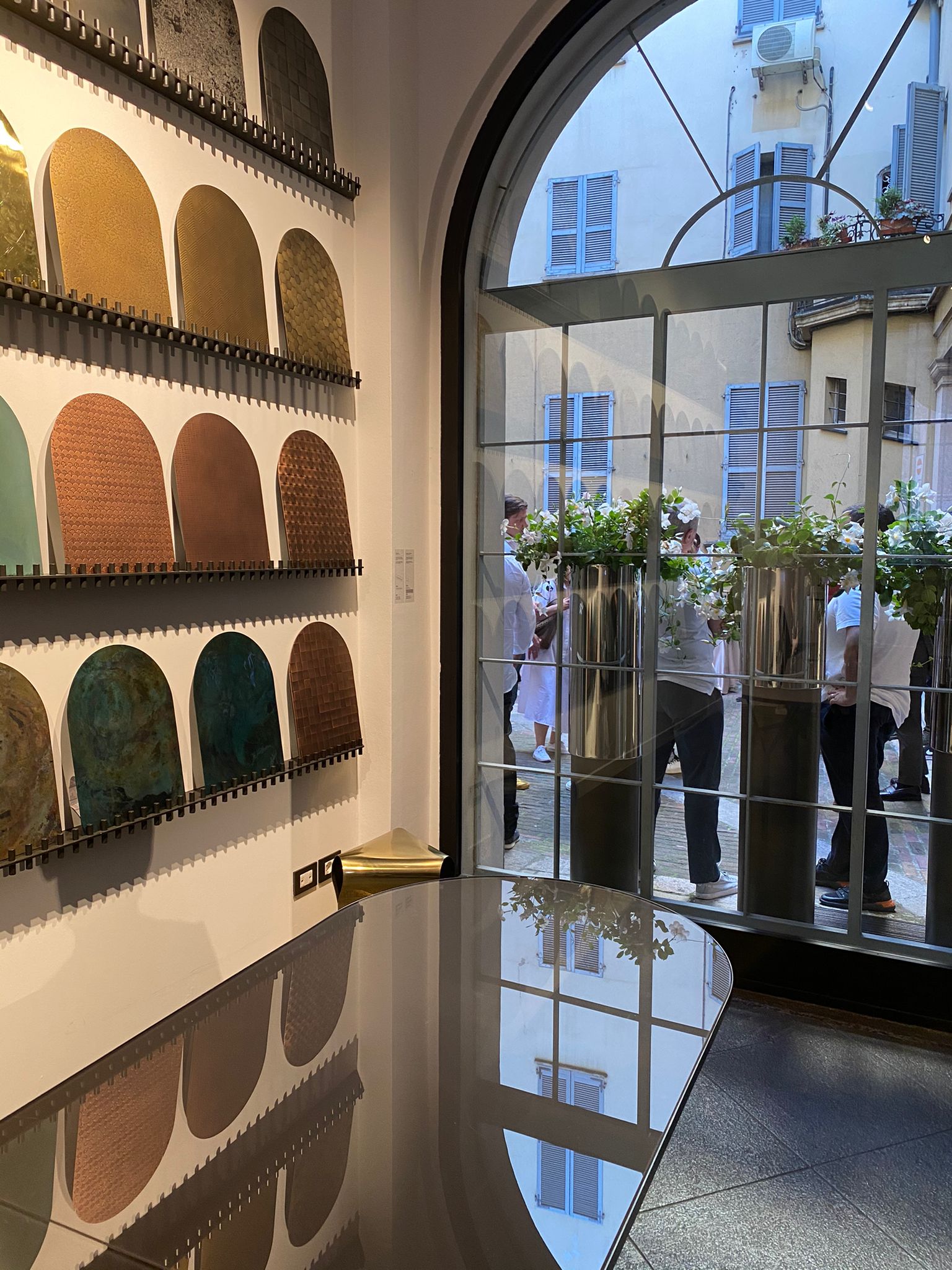 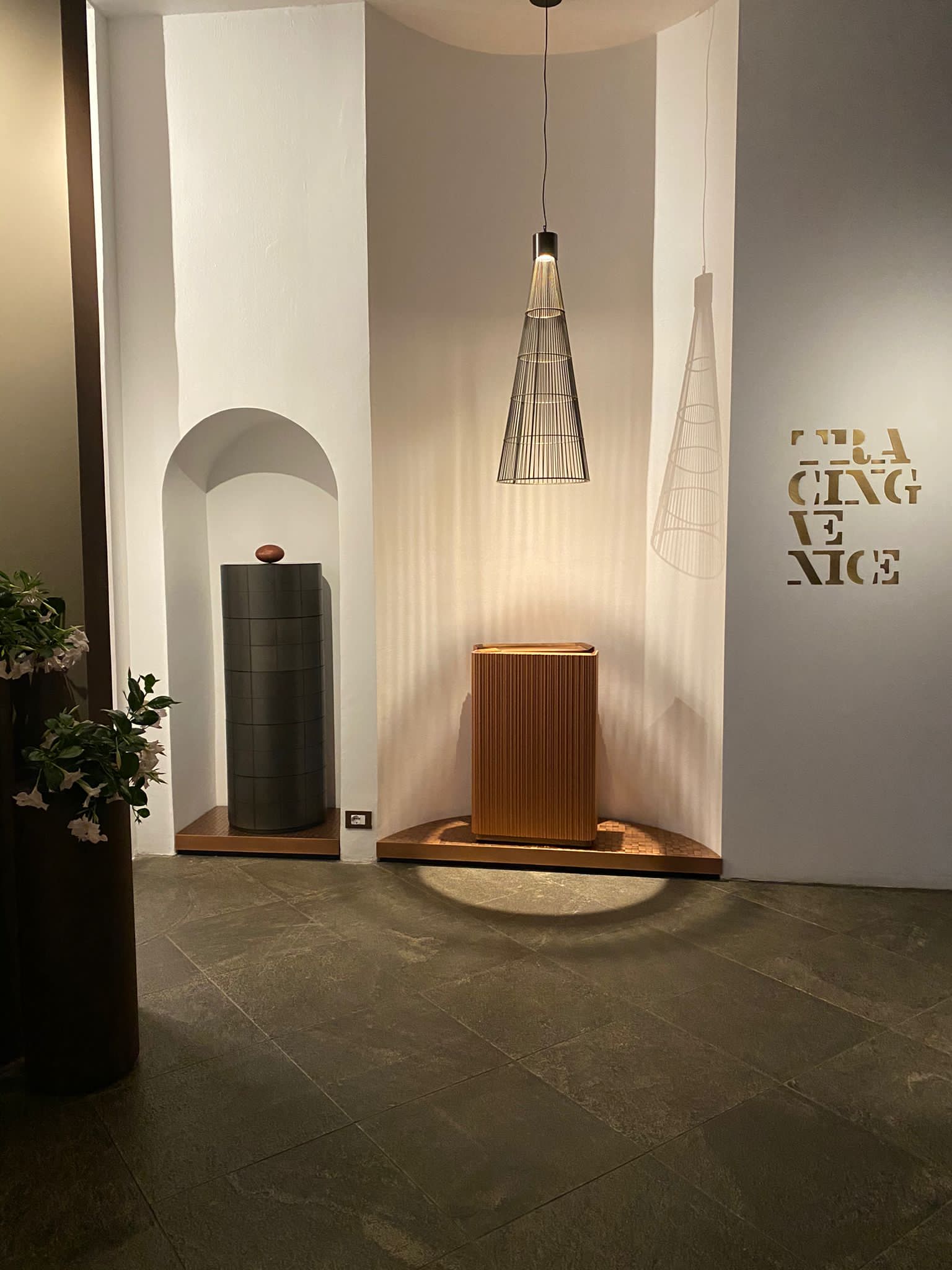 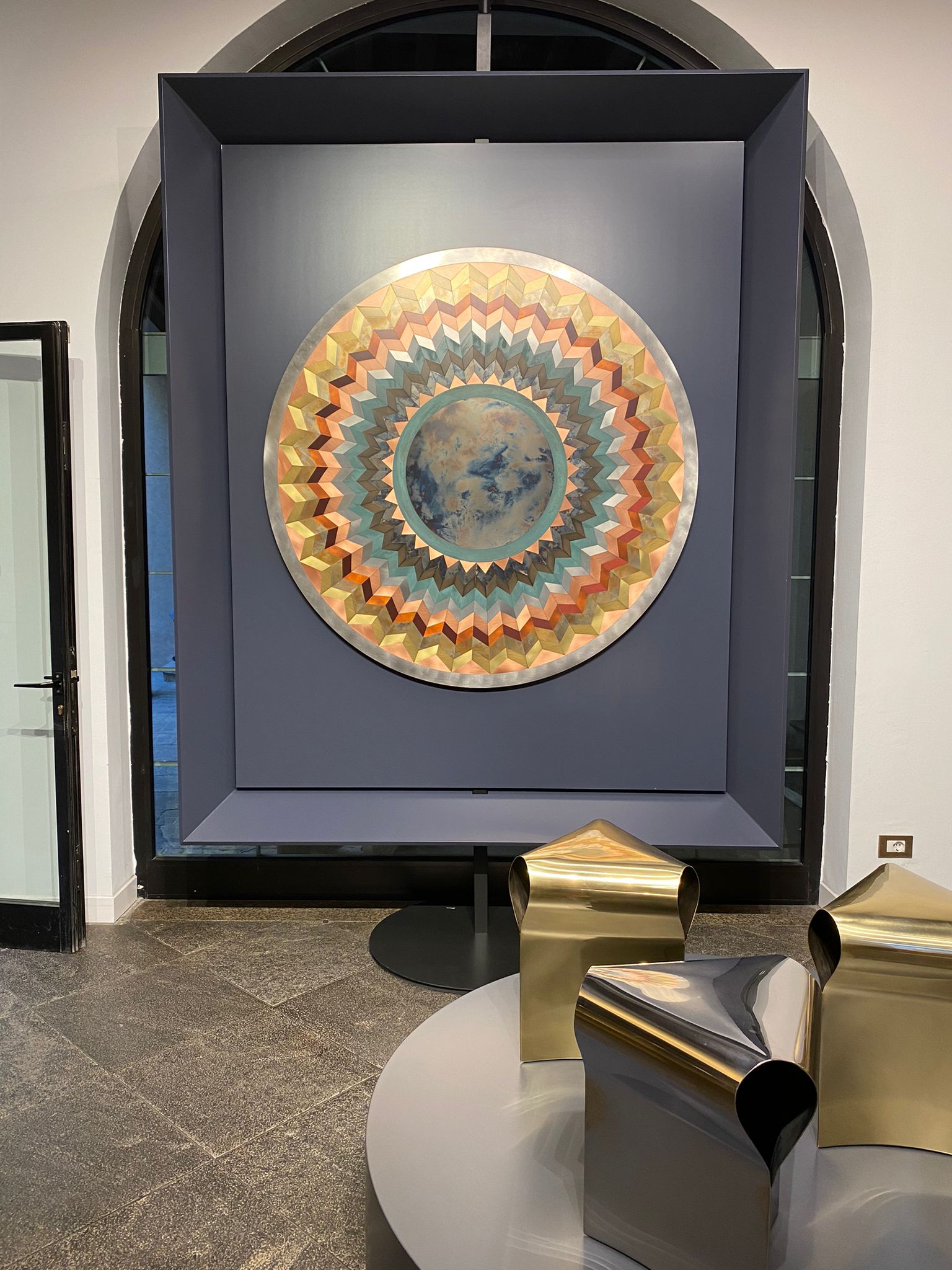 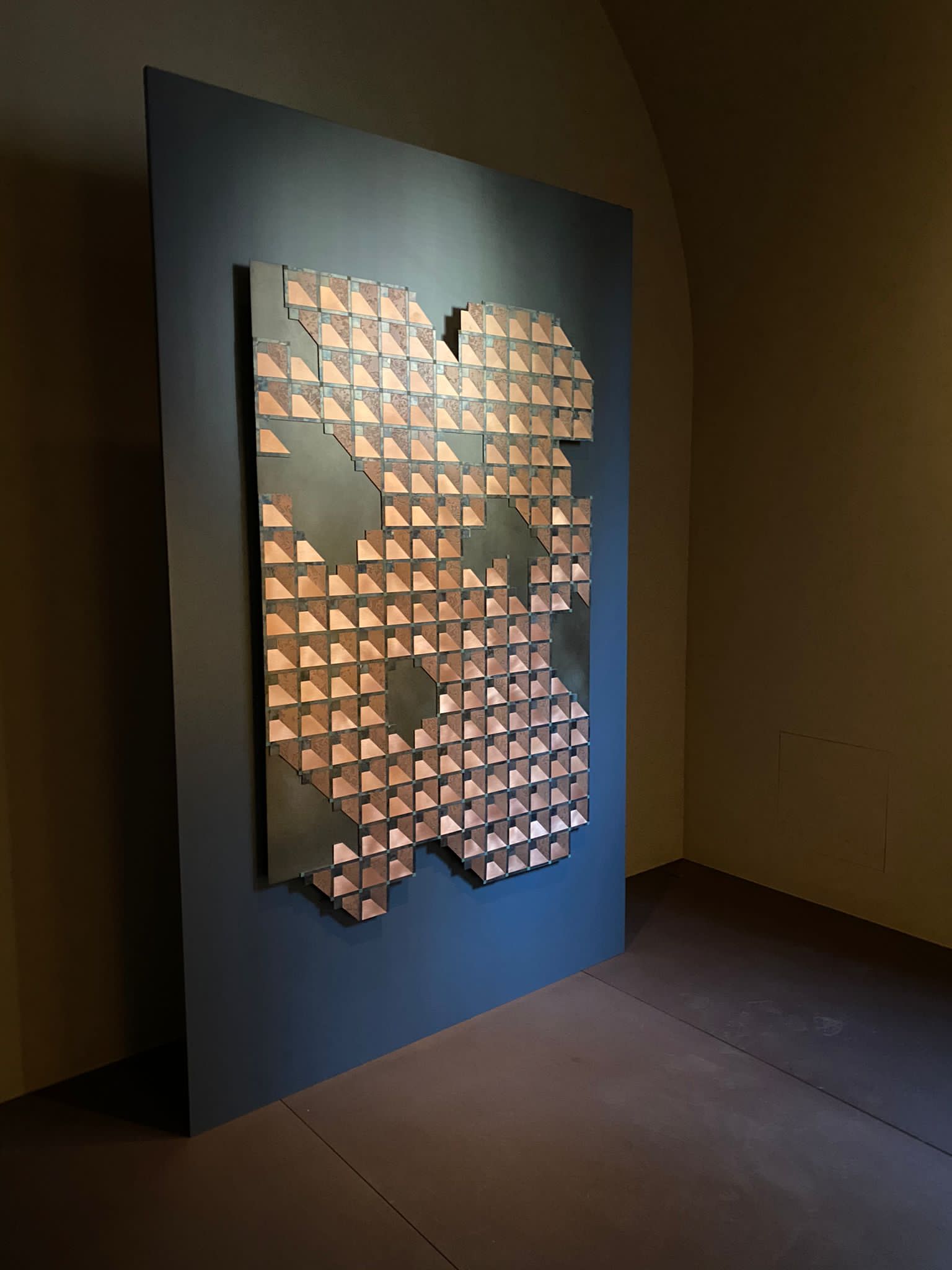 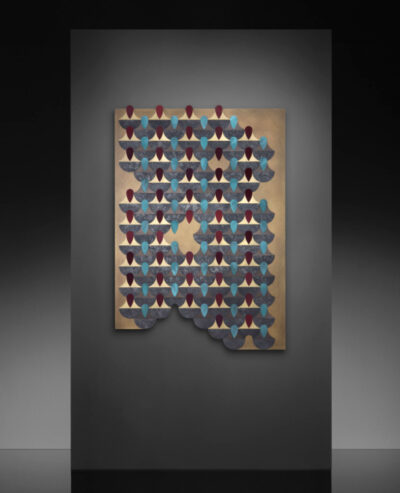 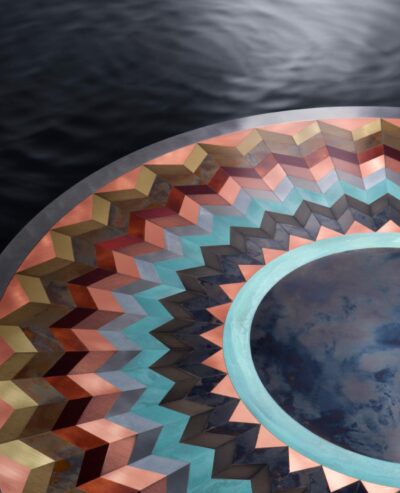 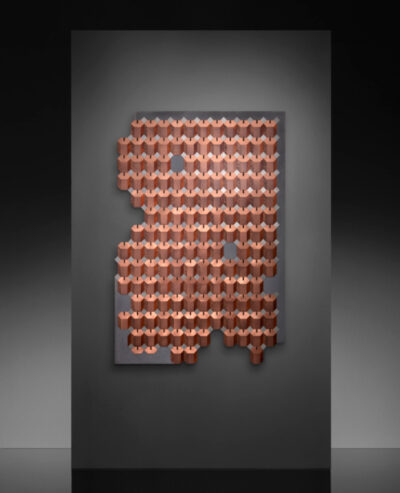 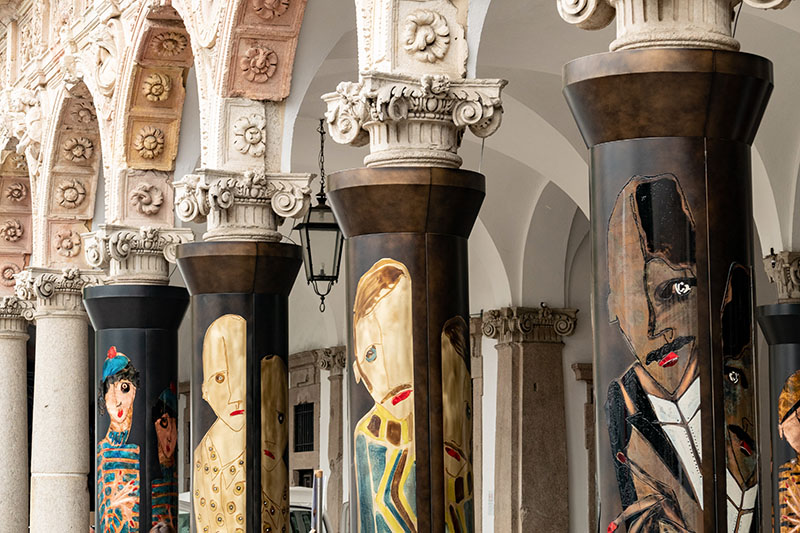 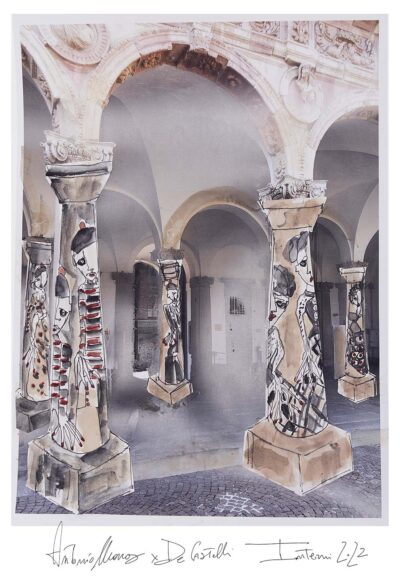 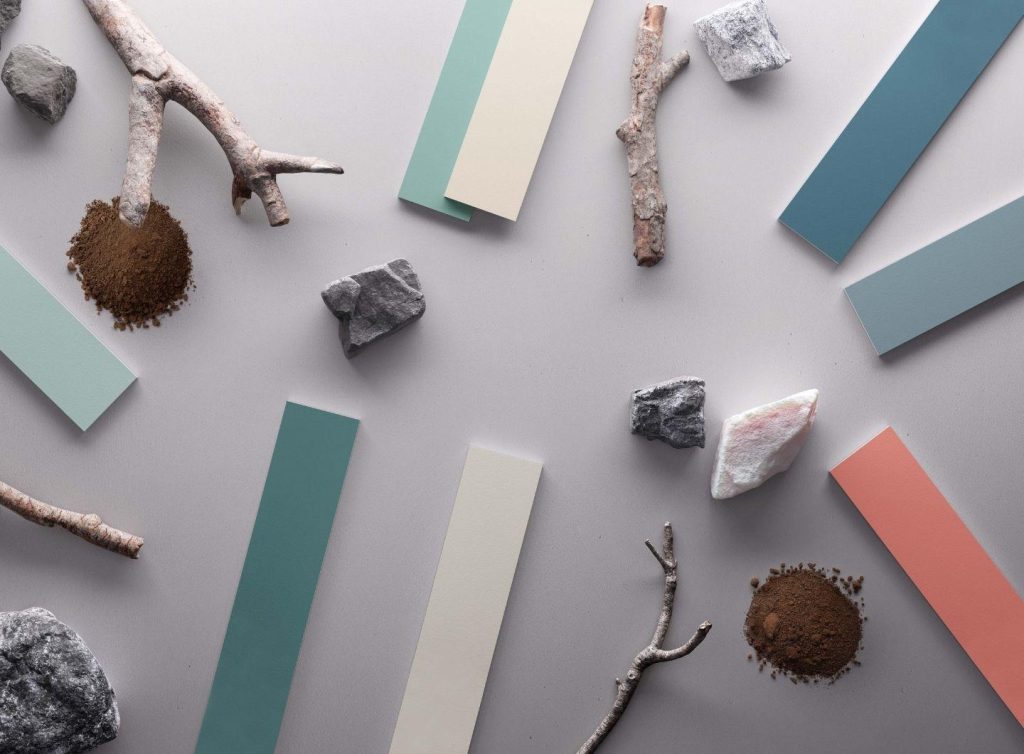 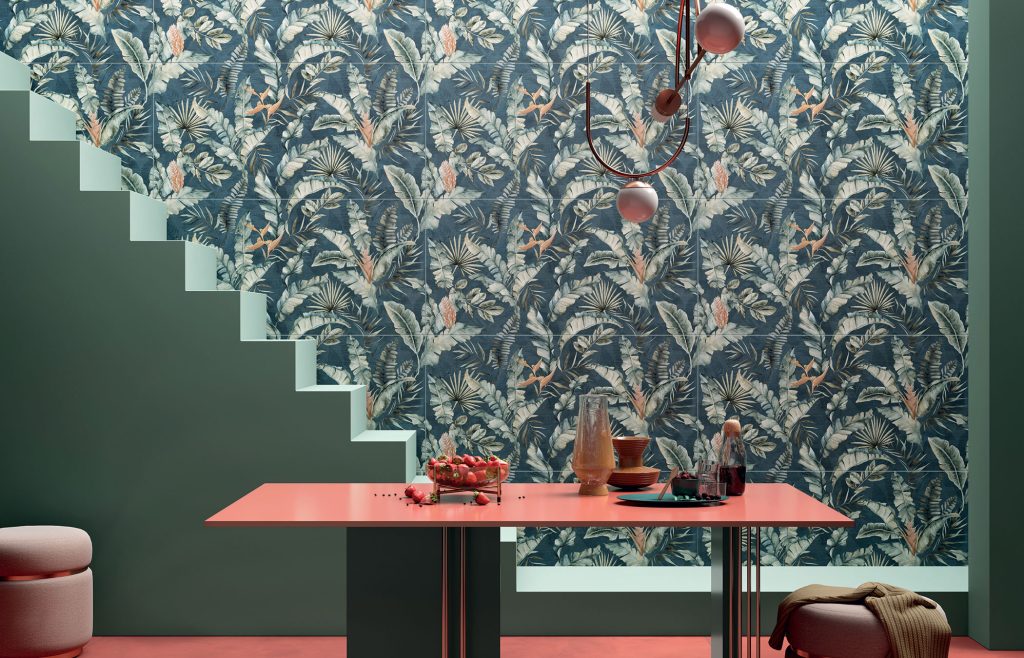 On the occasion of Fuorisalone 2022 Mirage presents EpicArc and Papier