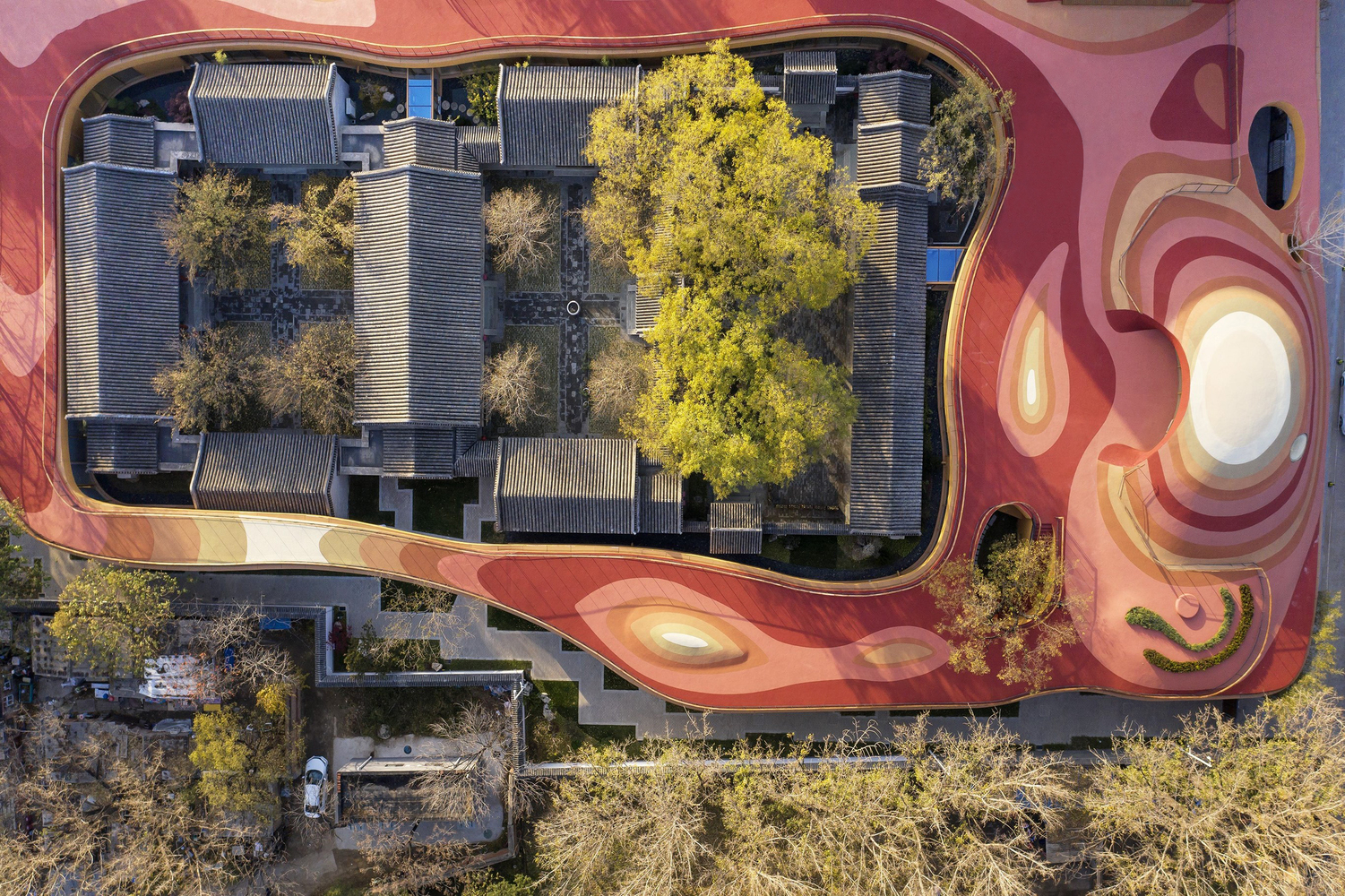 The kindergarten reflects the design trend, embraced in recent years by some architectural firms, of safeguarding the ancient Chinese urban fabric, formed by a dense network of hutongs – the narrow Beijing alleys – formed by lines of traditional Siheyuan courtyard houses. These buildings have often been demolished in recent years due to those urbanization and urbanization processes that began in the mid-1980s and contributed – and are still contributing – to the transformation of the country.

Having to build on a 9,275 sqm site occupied by an original 18th century Siheyuan courtyard, a recent courtyard replica built in the 1990s and a modern four-storey building, the architects of firm MAD decided to remove the replica and to replace it with a new space, capable of holding the ancient building in the palm of its hands.

The new structure actually wraps, as in a respectful embrace, the ancient complex with a flowing motion, which contrasts the rigid layout of the historic structure. The new complex, which winds around the past, is formed by a variety of independent spaces, united under a single brightly coloured roof, which also serves as an outdoor playground for the children. The project shows how architectural elements differing in type, aesthetics and historical periods, sometimes even contradictory, can not only coexist harmoniously, while maintain their authenticity and individuality, but they can also work in unison to create added value to the whole.

At ground level, the three courtyards surrounding the centuries-old trees, which correspond to those of the old Siheyuan structures, provide the teaching spaces, through the floor-to-ceiling glass walls, with light, ventilation and an outdoor playground. In these courtyards there is the presence of human life, nature and world, acting together to form the true core of the architecture – commented Ma Yansong, founder of studio MAD.

Inside the classrooms, the height lowered by a single aluminium false grille ceiling and the use of natural materials create a warm family atmosphere for the children. The kindergarten houses a small theatre, a library, an indoor playground and, on the west side of the lobby, the learning areas, which develop in fluid and uninterrupted spaces, where the different mixed-age learning groups are not separated by closed walls, but by curved walls at regular intervals.

The adjacent ancient courtyard house – hosting the children’s extracurricular cultural and artistic activities and the staff offices – is always visible through the large glass windows to represent for the children a point of inspiration and a chance to deepen their understanding of history and to learn from the past.

Furthermore, a series of slides and stairs connect the courtyards to the rooftop above: a modern, colourful undulating landscape that serves as an additional outdoor playground for the children. 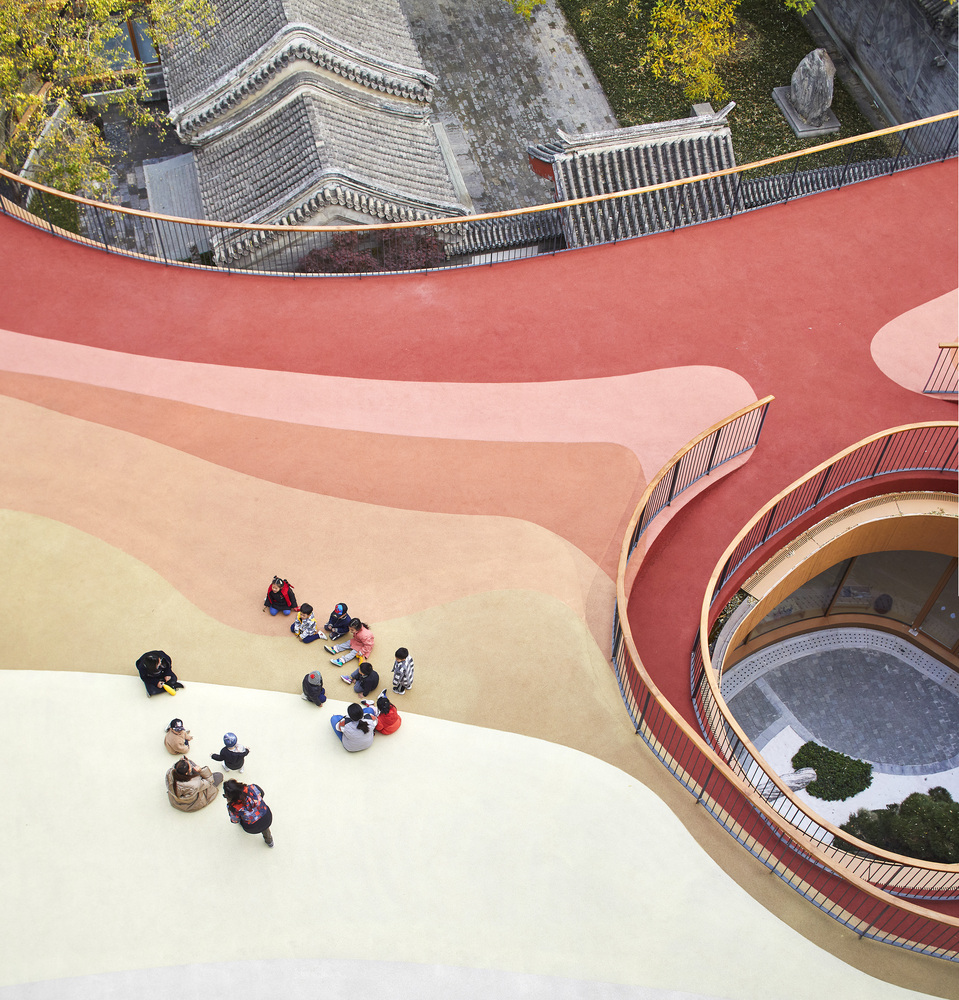 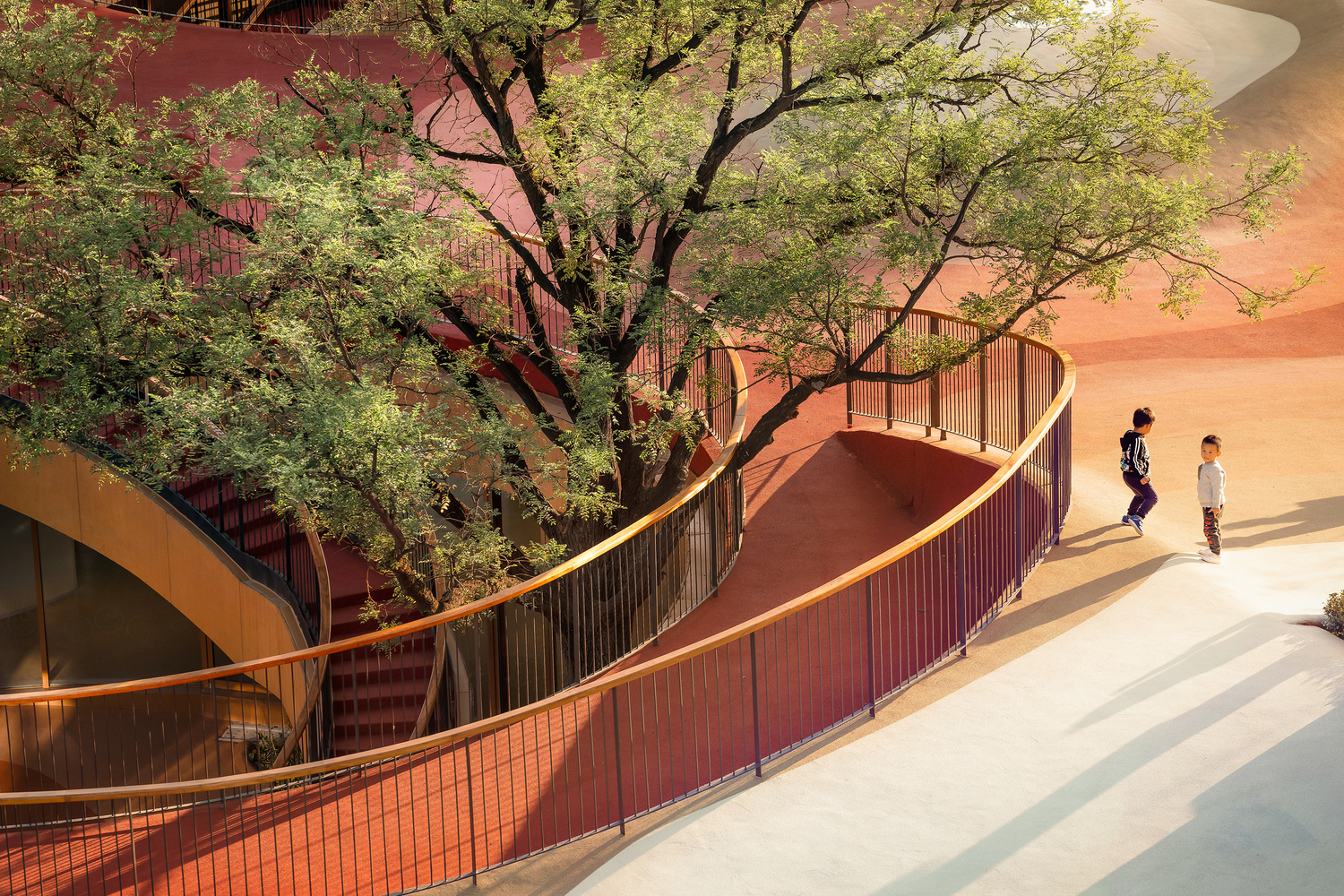 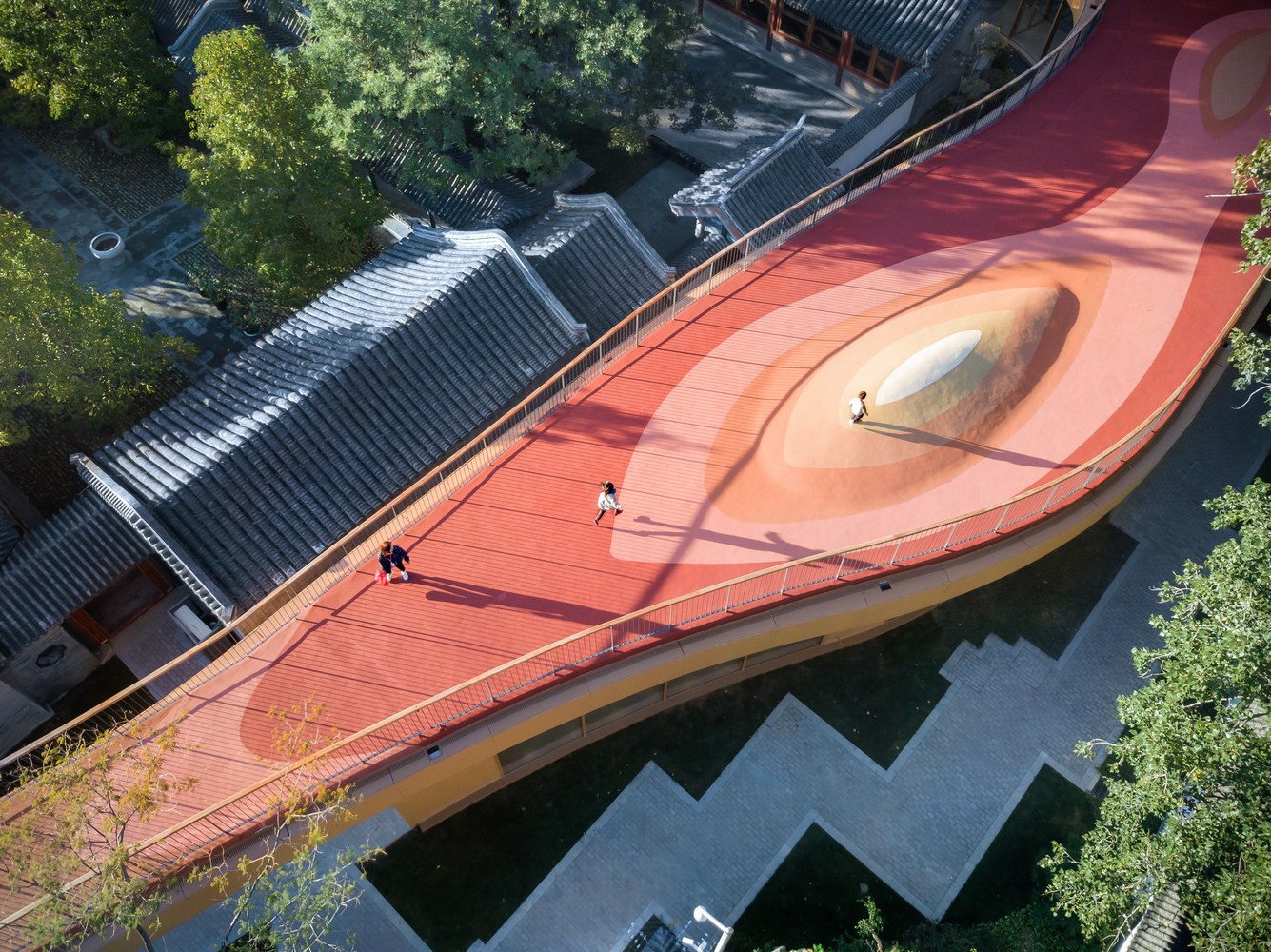 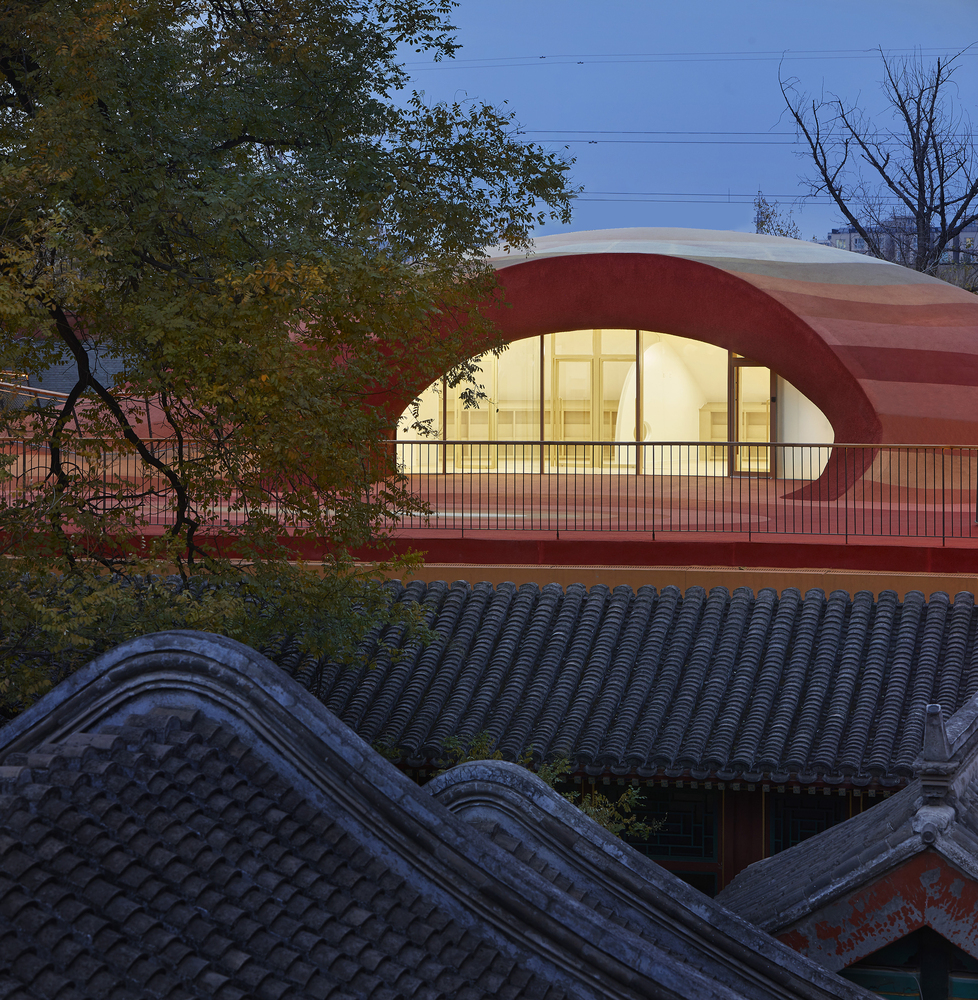 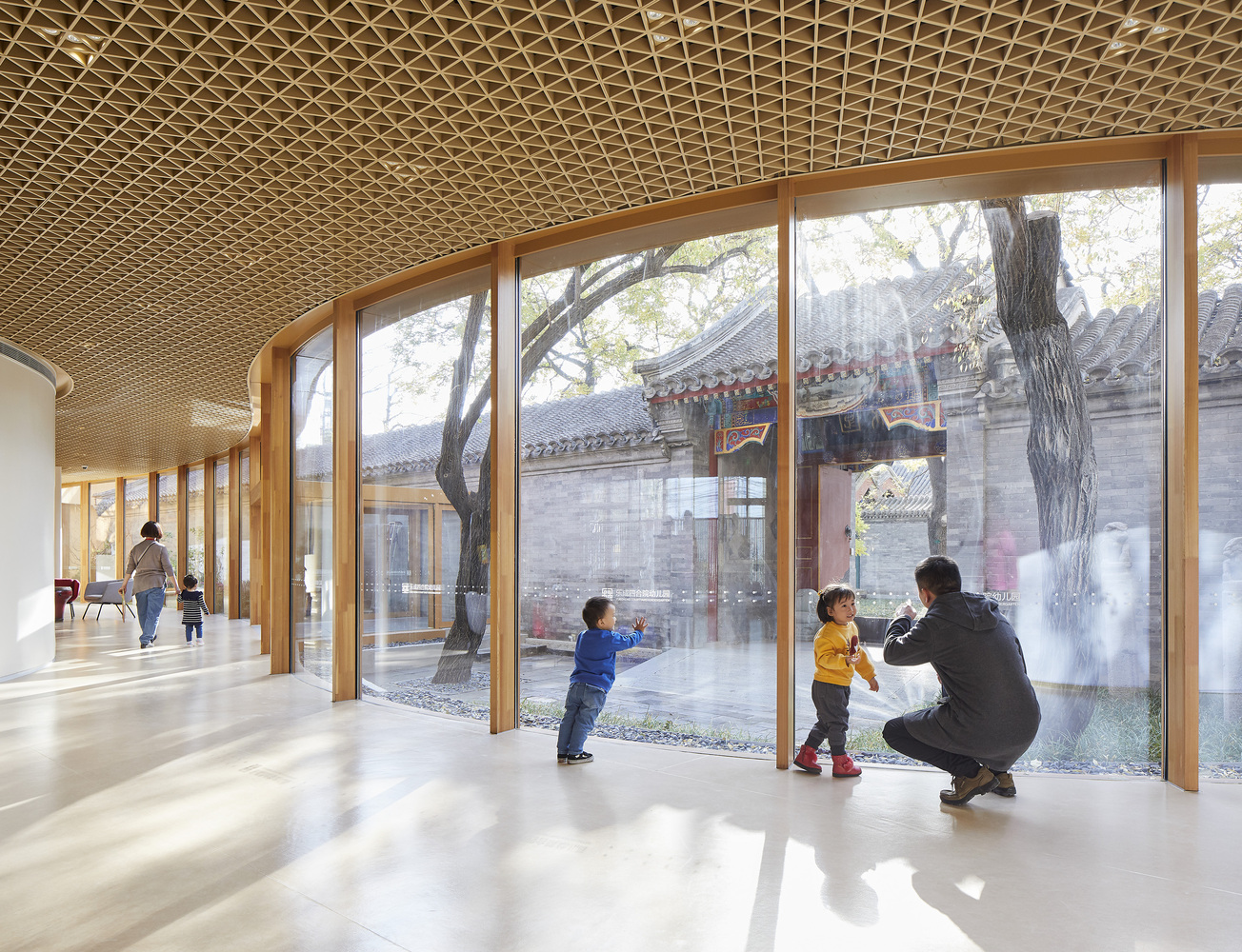 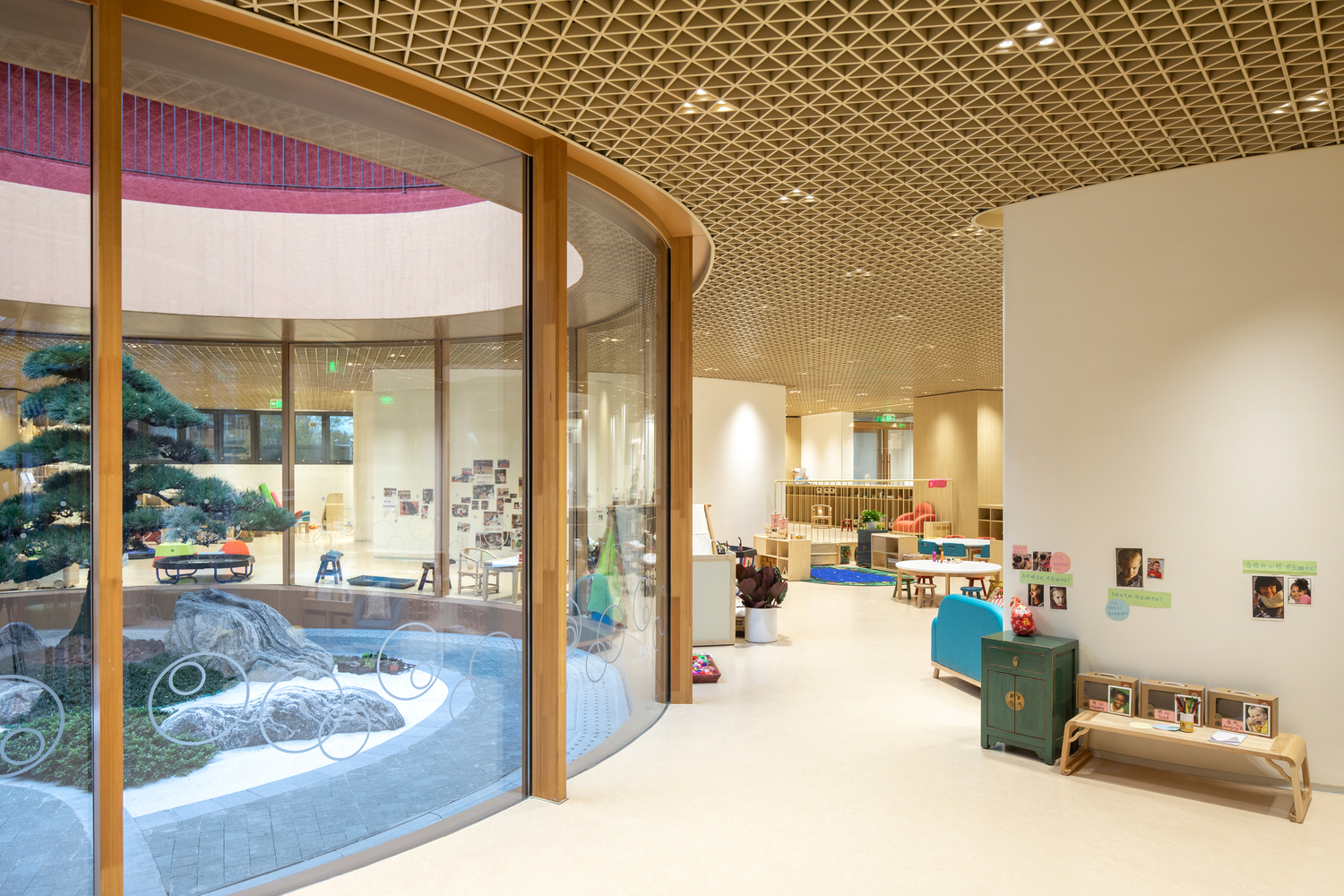 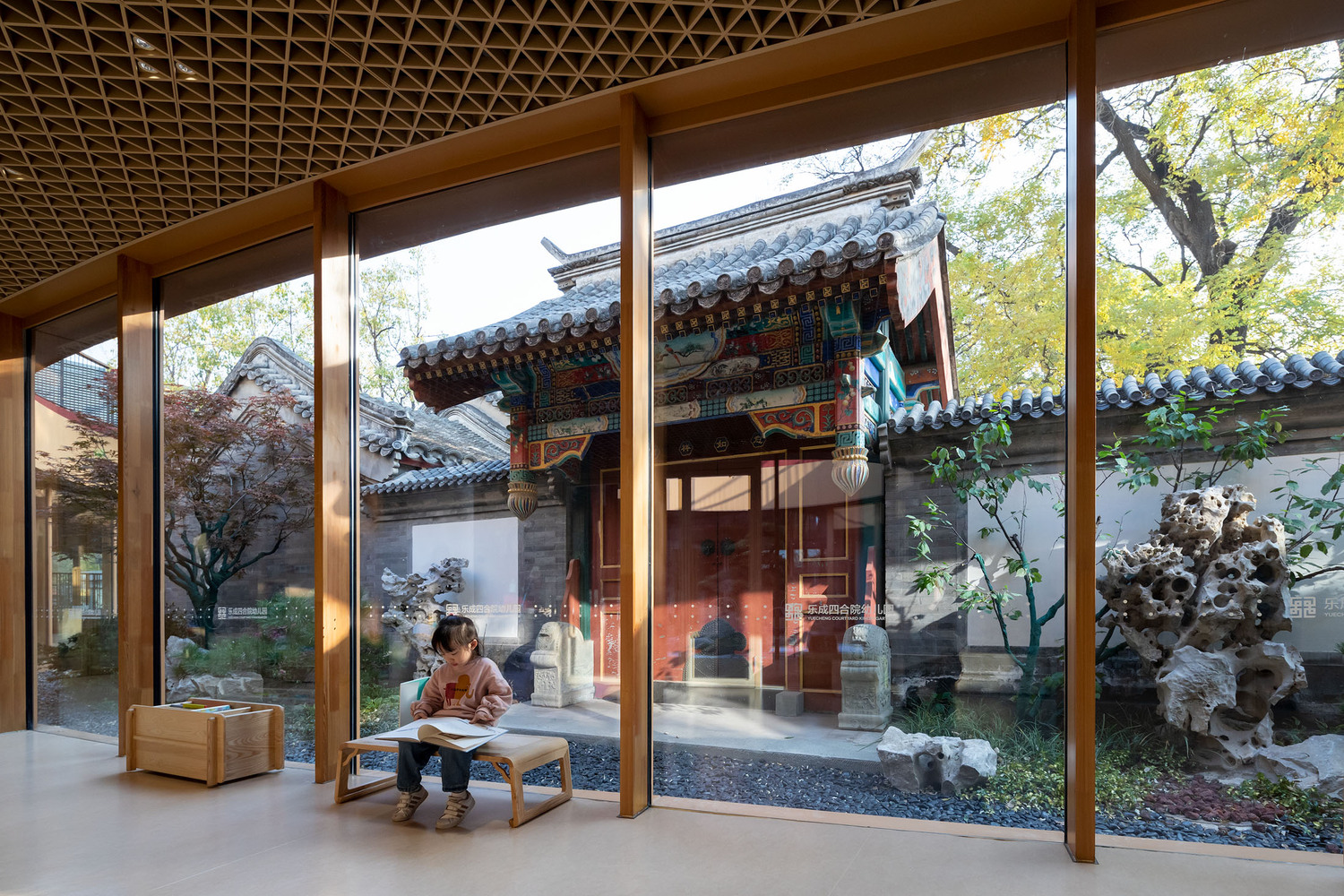 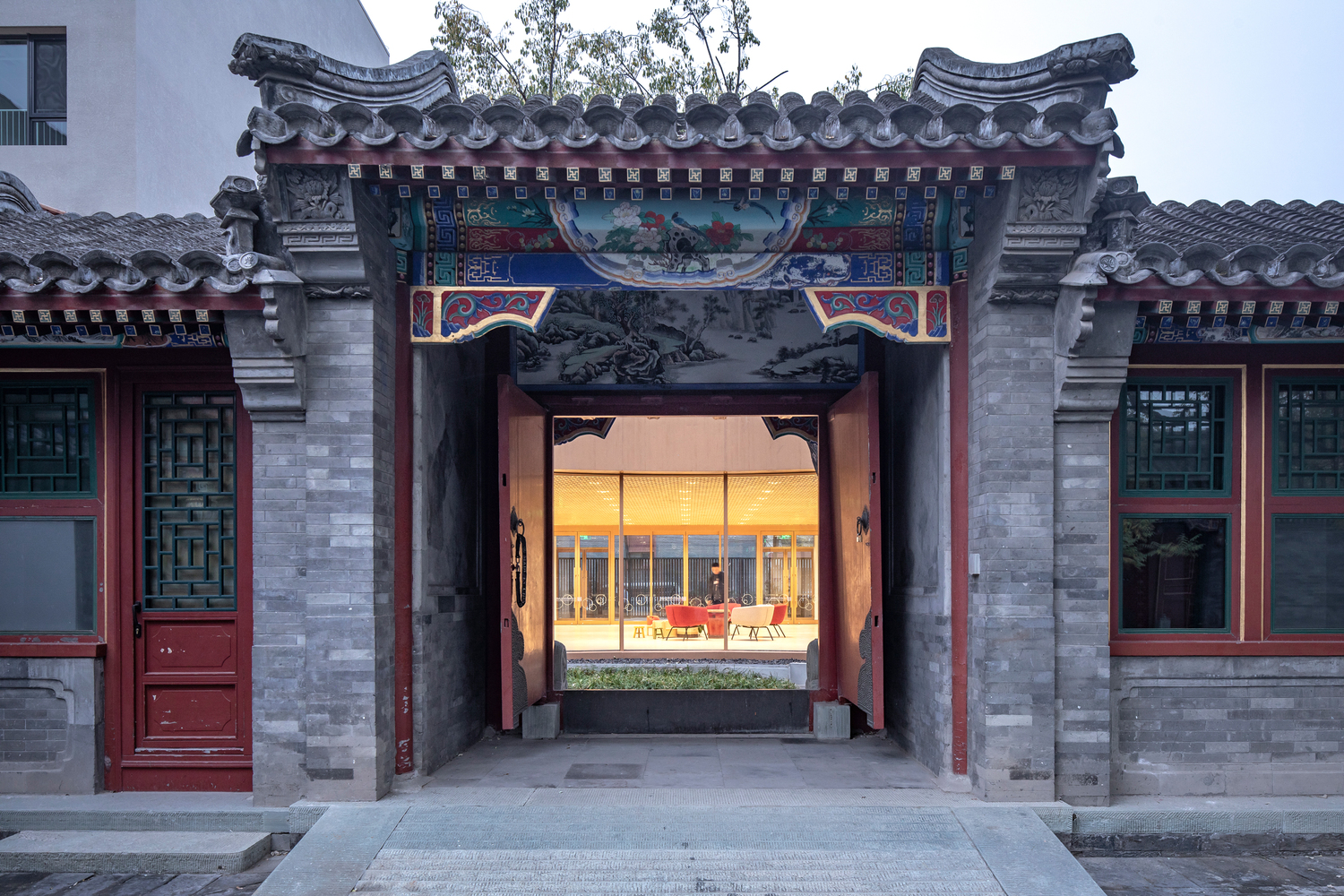 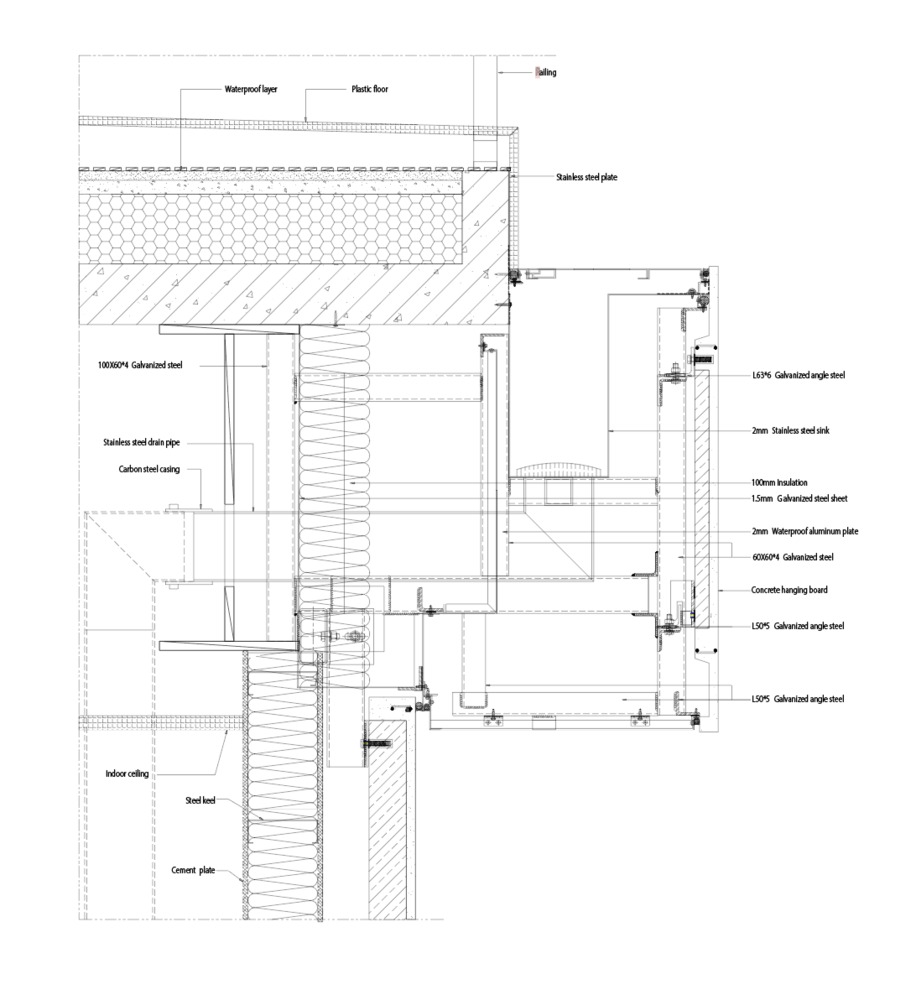 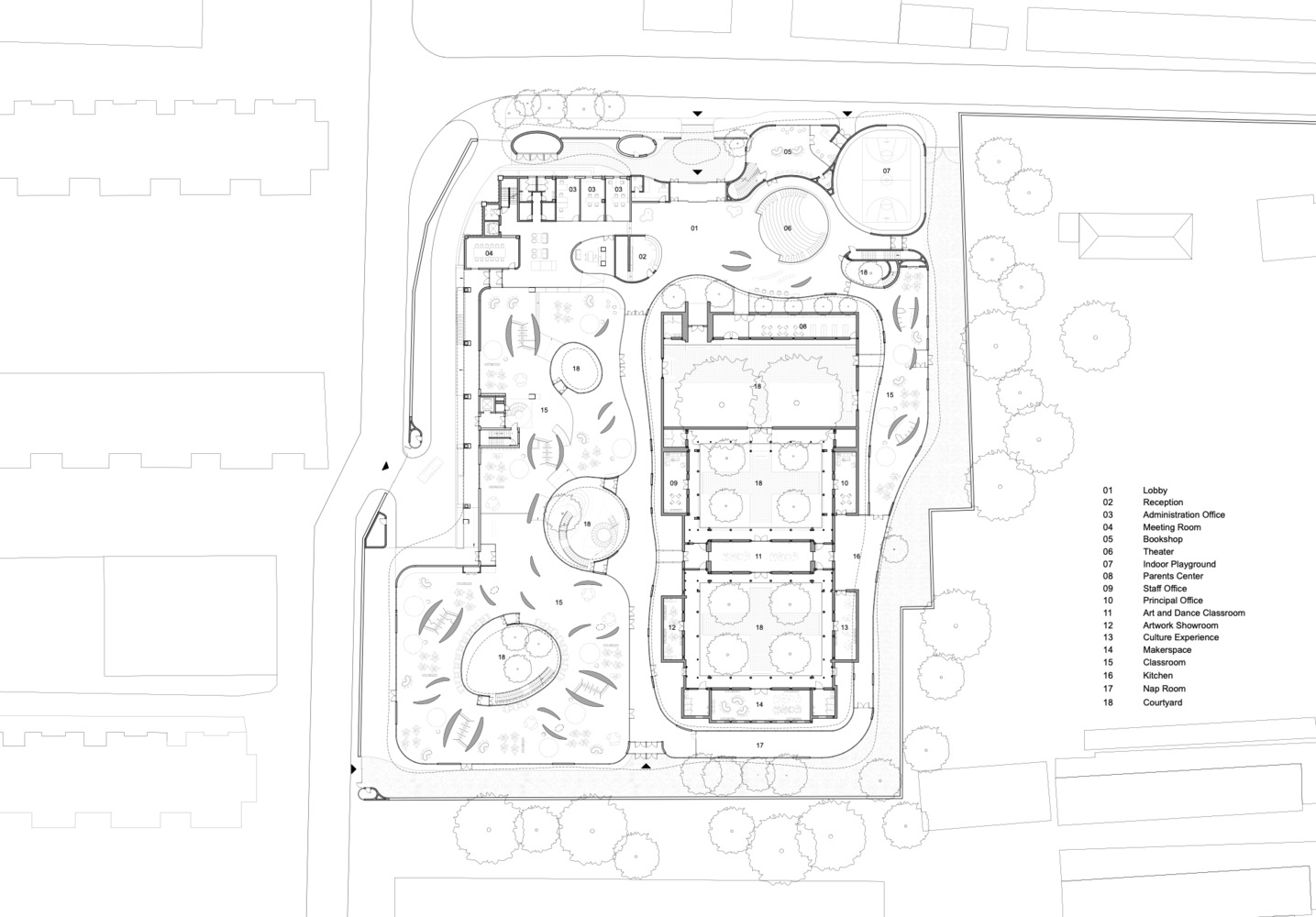