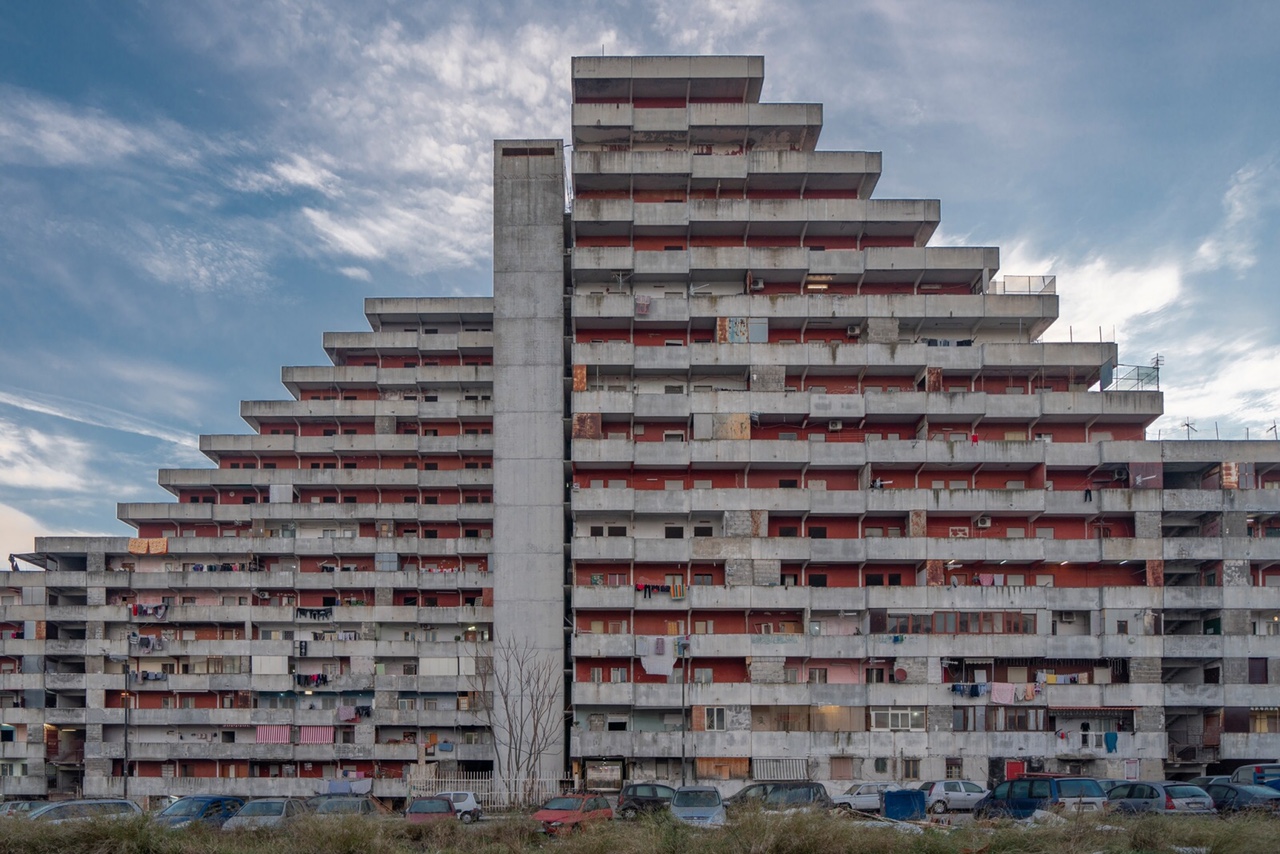 The Sails of Scampia: Regenerate or Demolish?

On February 20, 2020 the Sails of Scampia housing complex was again thrust into the spotlight after the start of the demolition work of the Green Sail, originally known as Sail A, the first to be destroyed of lot M.

This troubled history began in the early ‘60s, when, as a result of the Law 167/62, which regulated the construction plans for economic public housing, Naples acquired land in the area of Secondigliano and, with the support of the Cassa del Mezzogiorno, decided to start a large housing project. The design of the housing units was entrusted to Francesco Di Salvo, an architect born in Palermo and graduated in Naples in 1939, who already designed the low-cost housings of the Cesare Battisti District in Poggioreale.

With the noble aim of building in a suburb a self-sufficient housing machine, inspired by Le Corbusier’s Unité d’Habitation de Marseille of 1952, with green spaces, services and collective areas, that would reconstruct the urban structure of the decumans and the typical alleyways of Naples, recalling their colors and conviviality, Di Salvo designed on two contiguous lots seven mega structures on an area of about 400 hectares. Built between 1962 and 1975, four of the seven structures, those named with the letters A, B, C and D, were built in lot M and three, indicated with the letters F, G and H, were built in lot L. The two formal typologies adopted by Di Salvo were towers and tents, and it is to the latter, with their strong scenic impact, that we owe the collective image of the complex.

The original project was based on modules of 1.20 m, and their multiples, creating units that could meet the needs of each single dwelling. The buildings, with a parabolic curve profile and a prefabricated trestle structure, influenced by the great works of the Japanese Kenzo Tange and calculated by engineer Riccardo Morandi, were all oriented along the north-south axis to optimize the conditions of natural ventilation and sunshine. The scheme is that of two large stepped blocks – organized around fourteen floors, served by stairs and elevators – with in between a 10. 80 m void and connected horizontally by light and transparent hanging walkways, suspended at an intermediate height with respect to the heights of the dwellings.

The original project included also a series of green and leisure spaces, services and educational, cultural, commercial and health centers. The Sails, the largest social housing complex in Southern Italy, could have, should have, represented a housing model of aggregation and sharing, capable of expressing the complexity and richness of the city’s relationships and of providing the solution to the growing housing needs of that period. The reasons why The Sails didn’t meet these expectations, by many considered just utopias, transforming themselves over the years into the symbol of the failure of good intentions, into the places of decay, marginalization and underworld, sadly, are to be found in the modifications of the original project, mainly aimed at reducing costs, in the unauthorized settlements, in the negligence and in the total, long abandonment by the institutions. Certainly not in architecture, exactly as the words on the façade of a Sail remind us, with the disruptive force of their simplicity, We are not the problem.

The original project by Francesco Di Salvo of the Sails of Scampia,conceived as the modern architectural transposition of a social redemption, was strongly modified during their construction. The trestle structure was never built by the contractor, which replaced it with a traditional trilith structure, resulting in a greater distribution rigidity and in the reduction of the distance between the two blocks of each single structure from 10.80 m to 8.42 m. This reduction, worsen by the construction of the walkways in concrete instead of transparent materials and by the abandonment of the parabolic curve profile in favor of a ziggurat shape, modified the perception of the spaces and didn’t permit the sunlight to go inside. The curtain walls with internal polystyrene insulation, completely lacking sunlight and natural ventilation, have caused condensation, humidity and mold in a few years. The 23% increase in housing density and the missed construction of the common spaces – planned every six floors in correspondence with the stair blocks – of services, green areas, centers, playgrounds and infrastructures of the original project have compromised the quality of the architectural work and, consequently, of the life of the residents.

The situation was aggravated by the decision to assign the houses to a single social class, the economically and culturally most degraded one, and, then, by the disastrous event of the 1980 Irpinia earthquake, which led many homeless families to illegally occupy the structures, causing overcrowding and the creation of illegal superfetations and makeshift shelters in the common areas and in every nook and cranny of the buildings. From that moment on, vandalism, abandonment by the institutions and total absence of maintenance resulted in decay, corruption and crime. At the end of the 1980s, the Sails became more and more object of public debate and someone began to ask for its demolition and replacement with small buildings, where the residents could be transferred. The first structure to be demolished was Sail F of lot L, in 1998, followed by the other two of the same lot: Sail G was demolished in 2000 and in 2003 it was the turn of Sail H. A chromatic classification was then added to the alphabetical one of the four remaining Sails of lot M, so that Sail A became the Green Sail, Sail B the Blue Sail, Sail C the Yellow Sail and Sail D the Red Sail. In the meantime, the construction of the buildings and common spaces that should have contributed to the redevelopment of the Scampia district stopped due to lack of funds and the residents were once again left to fend for themselves, leaving the issue of the Sails of Scampia to become object of debates between groups in favor of the demolition of the remaining four sails and others in favor of their regeneration.

Among the latter, many architects and academics presented a petition against the decision to demolish an important architectural heritage in favor of a recovery, as happened, and is happening, with other buildings sharing similar history and evolution. Ada Tolla, an Italian architect teaching at Columbia University in New York, wrote in a 2015 report for the New York Times that it was important for her to acknowledge that the Sails are not a failure of architecture, but rather a failure of their construction and maintenance. Demolition is often an attempt to sweep things under the rug and it doesn’t seem to be the right way to learn from the past. Nonetheless, the municipality of Naples decided with a deliberation in August 2016 to tear down in sequence the Green, Yellow and Red sails, preserving only the Blue one, which will be redeveloped as temporary housing unit and, ultimately, as the headquarters of the Metropolitan City. Thus, on February 20, 2020, the demolition of the Green sail started, as the first operation of the overall Restart Scampia project, which, after the demolition of the other two sails, intends to build over 170 new public housing units, arrange the surrounding spaces and increase the public services in the area. The project also includes the completion of the Faculty of Medicine and Surgery of the Federico II University and the redevelopment of the Scampia Park, with new connections with the urban surroundings.

However, after more than a year from the start of the demolition of the Green sail, turned into a painful public show where, regardless of the intentions, it was impossible not to see its populist and demagogic imprint, the area is still a heap of wastes, the construction site is closed and the numerous residents of the remaining sails, both registered people and squatters, continue to live in conditions of such degradation as to make it urgent to restart the construction of temporary housing and new housing units and the works on the buildings assigned to former dwellers, which already require, after few years, numerous maintenance interventions. In view of the demolition of the next two Sails, scheduled for 2022, the doubt re-arises that replacing structures with other constructions without a complex social recovery project, which in addition to the creation of services and infrastructures, facilitates the development of job opportunities while recreating the typical values of urban centers, can only serve, as already happened with the demolition of the sails of lot L between 1998 and 2003, to move the problems to other areas, often neighboring ones, without ever solving them. 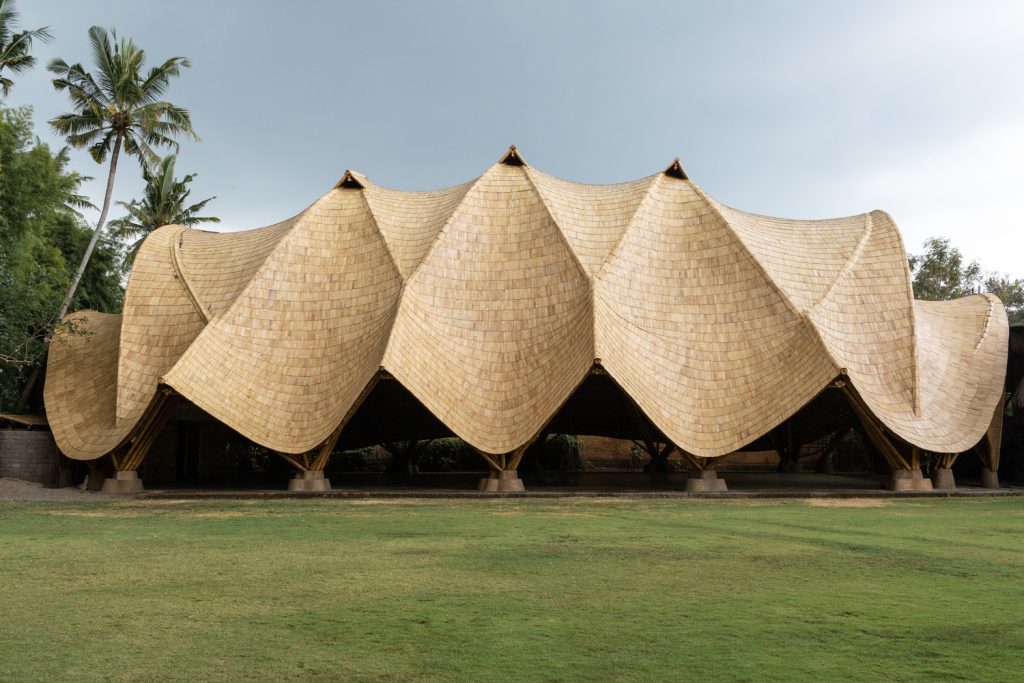