Benedetta Tagliabue – EMBT studio presents its latest realized project “San Giacomo Apostolo” church and parish complex in Ferrara, Italy. This work has been developed over 10 years (2011–2021) and is a value for the peripheral neighbourhood of Arginone, since the new complex is available to the entire community, both ecclesiastical and secular. The complex consists of a church of 710 m2, a parish complex of 873 m2 and a landscaped outdoor space of 600 m2.

Nature is present in every facet of this project. From the exterior, you can see a light building of organic shapes, surrounded by a slender grove, which is accessed through two lateral routes that lead to a naturalistic design square in front of the church, which acts as a meeting point and symbolizes the centre of two large arms open to the community. The church surprises with its light and suspended roof, with an undulating silhouette covered with copper that is inspired by the aerial and monumental forms of a hot air balloon.

“The inspiration came one day when we were analysing the territory and the environment, when we saw the sky of Ferrara full of hot air balloons for the international festival that is held every year in September. Thus, we imagine a light and friendly church, which comes from heaven and is located in the place where the Christian community needs it most, a contemporary church, rich in strength and symbolism, surprising and familiar at the same time, inspired by the early days of the church” explained Benedetta Tagliabue, founder and director of the firm Benedetta Tagliabue – EMBT.

Both the combination of materials and the construction system are modulated differently to characterize the different areas of the program. With the same materials it has been possible to work from the most monumental space, the church, to the spaces of the parish complex, with a more domestic aspect. The facades play with plaster and exposed brick placed in different arrangements and made to measure with a three-pointed design reminiscent of the Palazzo dei Diamanti in Ferrara, a masterpiece of the Renaissance. Access to the temple is through a large wooden gate, a fundamental natural material and very present in the project; both on the roof, the furniture, and the carpentry, which draw tree shapes.

In the centre of the church the altar is the protagonist. Located in a circular presbytery, the altar is also the point around which the hall and the side chapel are organized, as well as the baptistery and all the annexed spaces. The vaulted wooden ceiling, which alludes to the naves of medieval churches, has been arranged radially around a ring of light surrounding a suspended baldachin, whose shape resembles the shell of St. James. The central skylight allows light to descend on the altar area, changing its effect at different times of the day. A large cross of wooden beams flies over the entire nave with great symbolic force. The cross has been made with some woods that were originally found in the old Town Hall of Ferrara, and that were recovered especially for the church. It was decided not to restore them so that they would transmit all the primordial symbolism through their ancient and humble material.

The inspiration of nature is also found in the altar, which is made of a block of white Trani stone left almost untreated. Only the surface of celebration has been carved with 4 small crosses in each corner and with a secret drawer where a relic is kept. The sides of the rustic stone recall the most primitive moments of the Church when a mass was celebrated with found objects and where the symbol acquired an even greater importance. The furniture of the presbytery has been made to measure in laminated wood, obtained by combining different types of wood, which materialize simple, organic and at the same time sculptural forms. The wood contrasts with the raw concrete and stone of the walls and floor, creating a common thread between the objects.

The iconographic instrument of the art objects, commissioned to the Italian artist Enzo Cucchi, is conceived as an organic ensemble that unfolds in the space of the church. Cucchi, assisted by Don Roberto Tagliarini for the liturgical interpretation, has placed large crosses in serene stone on each of the walls of the church and the baptistery. Pieces of black ceramic has been installed in each of them, from the ceramic laboratory Studio D’Arte Gaeta, in which drawings by Cucchi that represent moments of the Old and New Testament stand out in bas-relief. The exposed concrete is enhanced by the solemn presence of serene stone. As an altarpiece, a Roman cross has been installed in serene stone that is inspired by the cross of gems, which was used in the early days of the Church and is surrounded by gleaming pieces of coloured ceramics that symbolized stars and planets, saints, angels and sacred figures of Christianity

From the open space of the church, you can access the chapel of daily worship that contains the BlessedSacrament, thanks to an external access. From the most sculptural part of the complex you can access the more domestic spaces for the sacristy, the parish house and the conversation room between the faithful and the parish priest, while in a low profile and organic volume are the annexed spaces that will offer educational, associative and recreational services to the community, as well as new multifunctional areas for the nearby school, with which the parish complex also formally dialogues with a volume attentive to the relationship with its environment. The interior is illuminated through suspension lamps made with thin wooden slats that make up small domesthat radiate light creating poetic geometries and angelic reflections.

After winning the competition in 2011, this project has been carried out on behalf of the Arcidiocesi di Ferrara-Comacchio, with the aim of promoting this urban area in great growth from an open space that balances the old and the new and gives the parish complex of ‘San Giacomo Apostolo’ the role of catalyst to create identity in the community and promote socialization, education, and interaction within it. 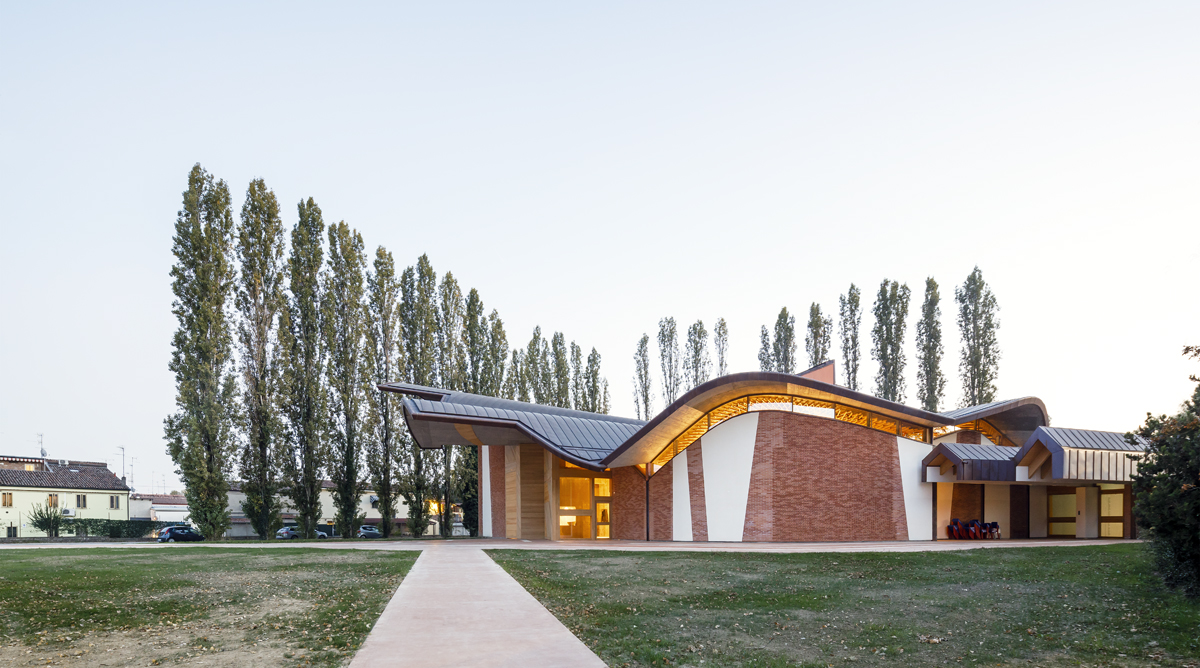 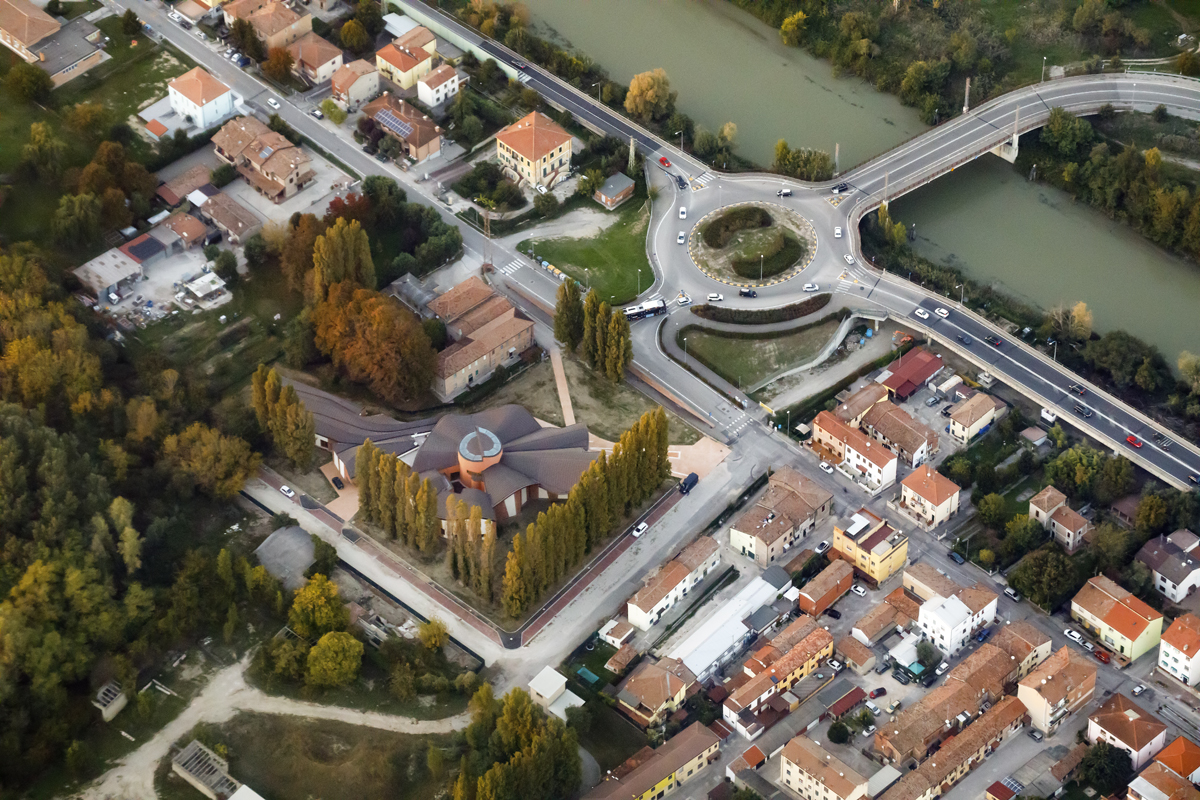 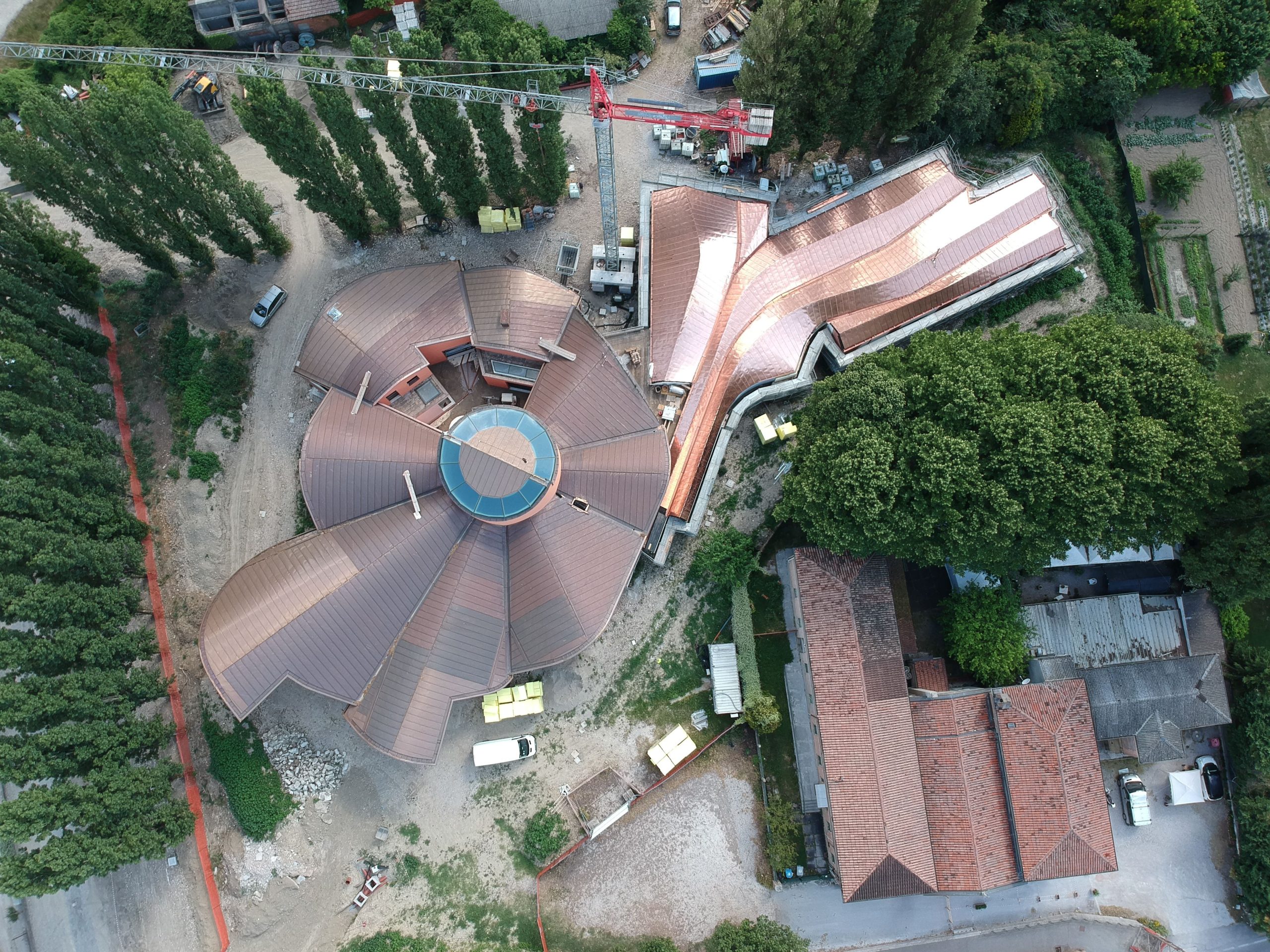 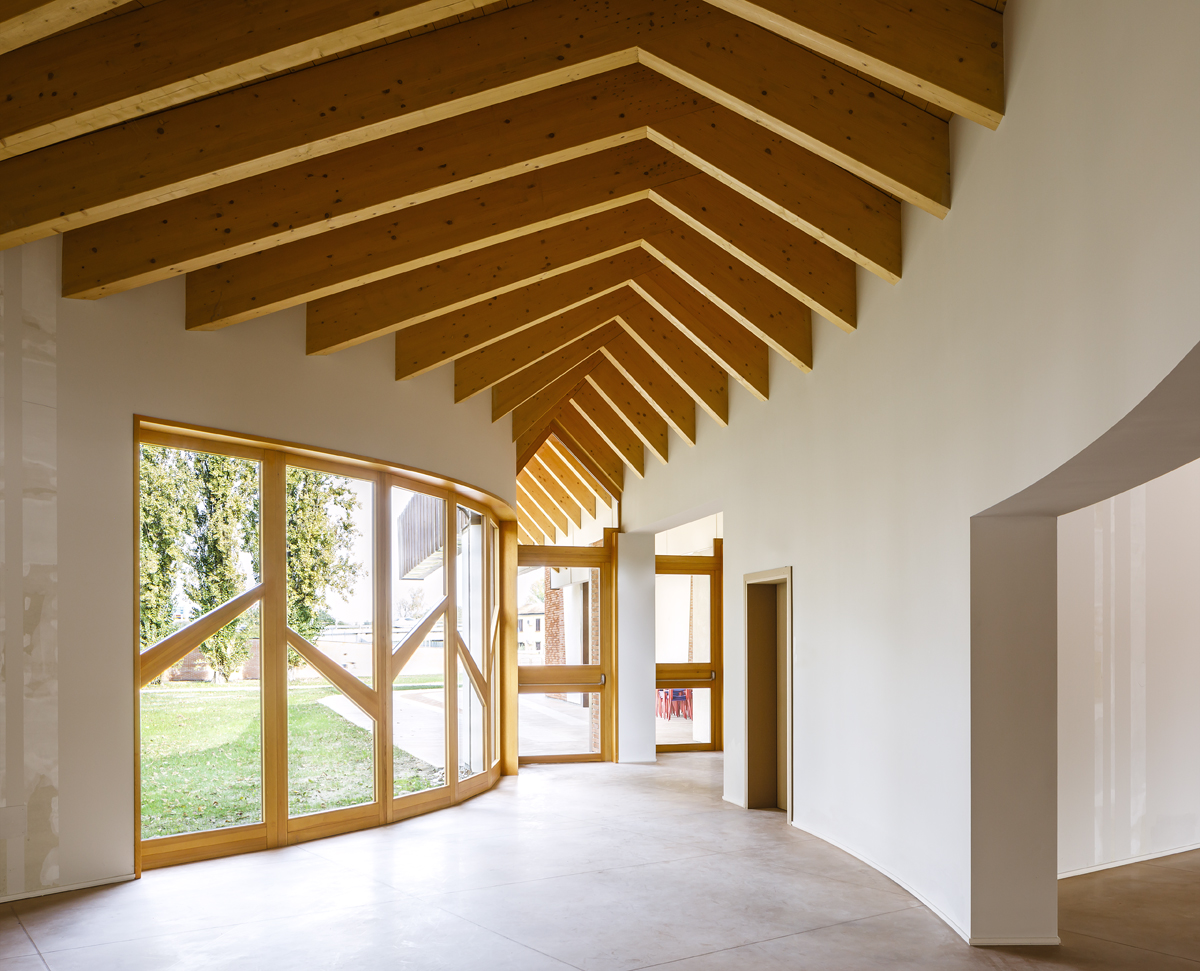 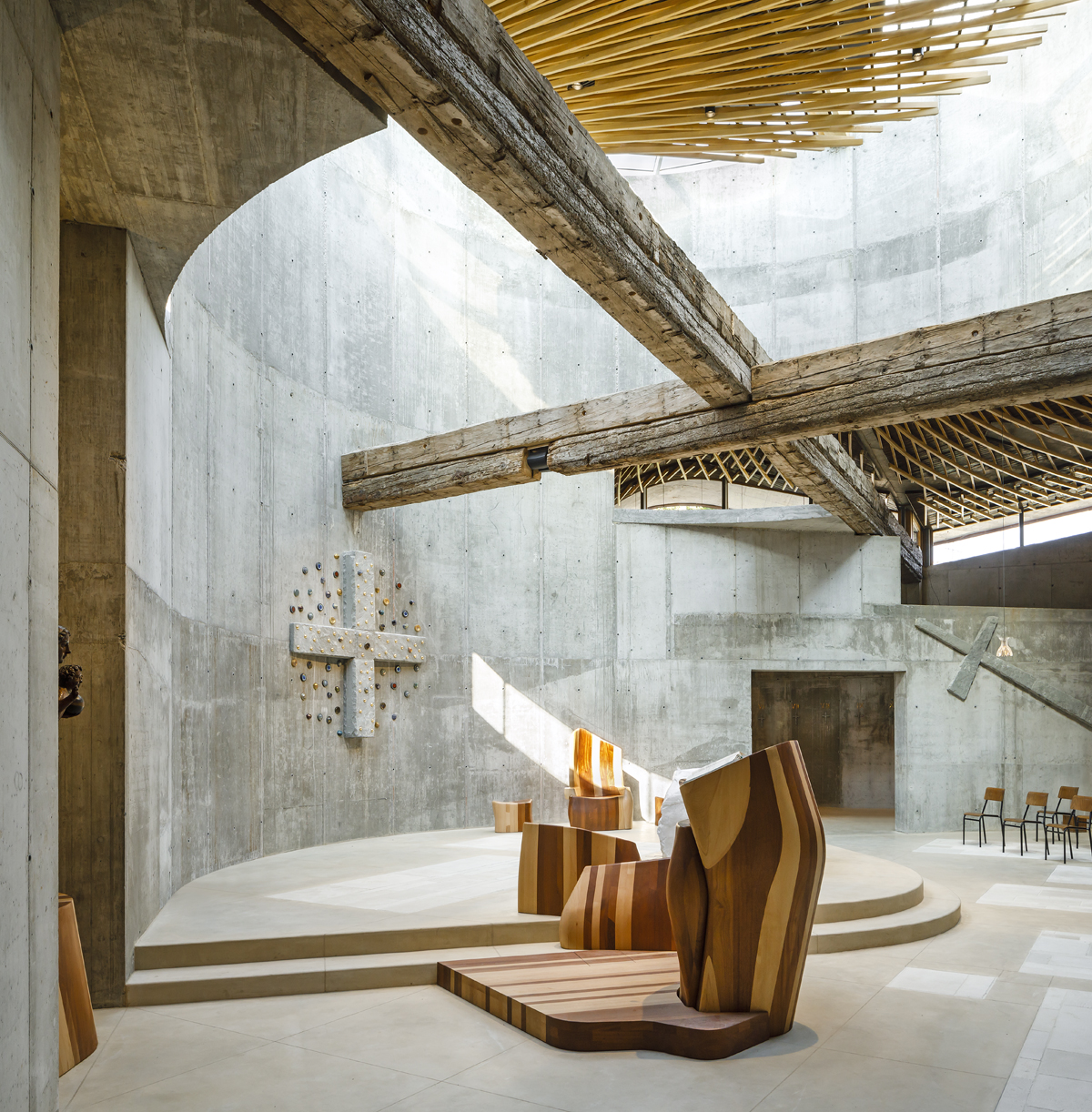 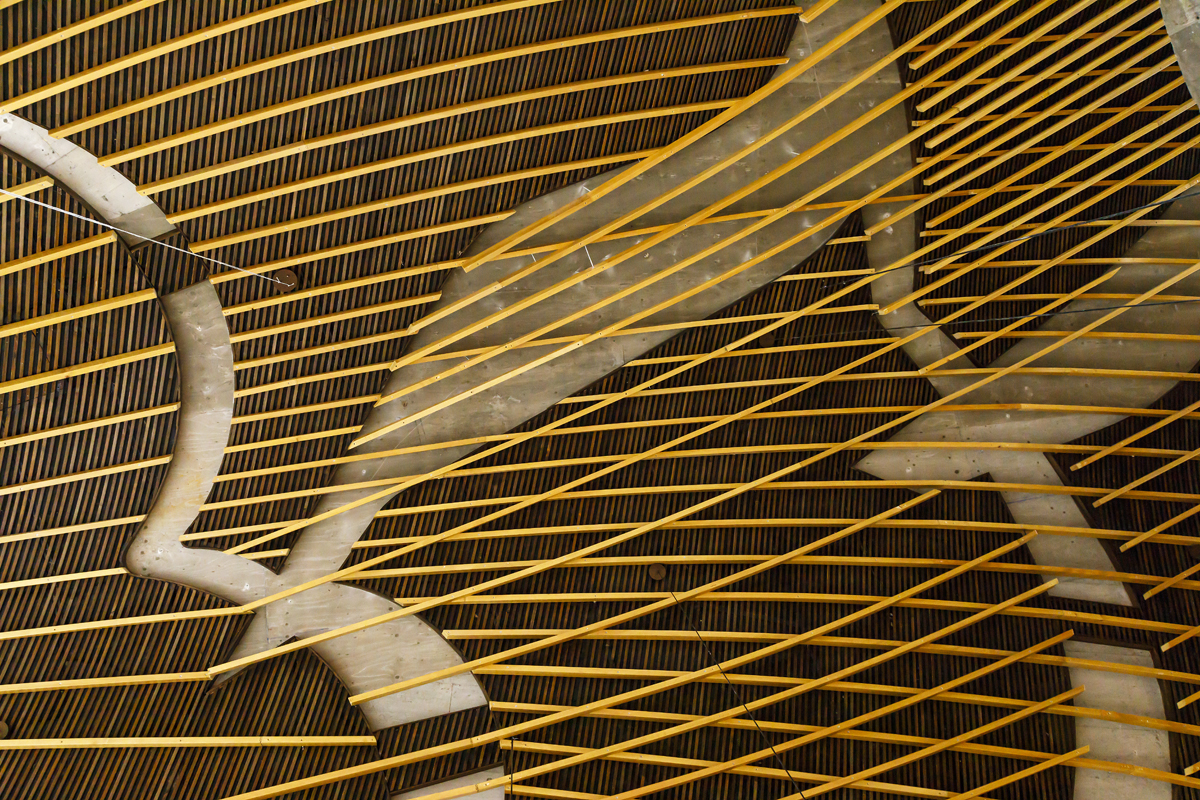 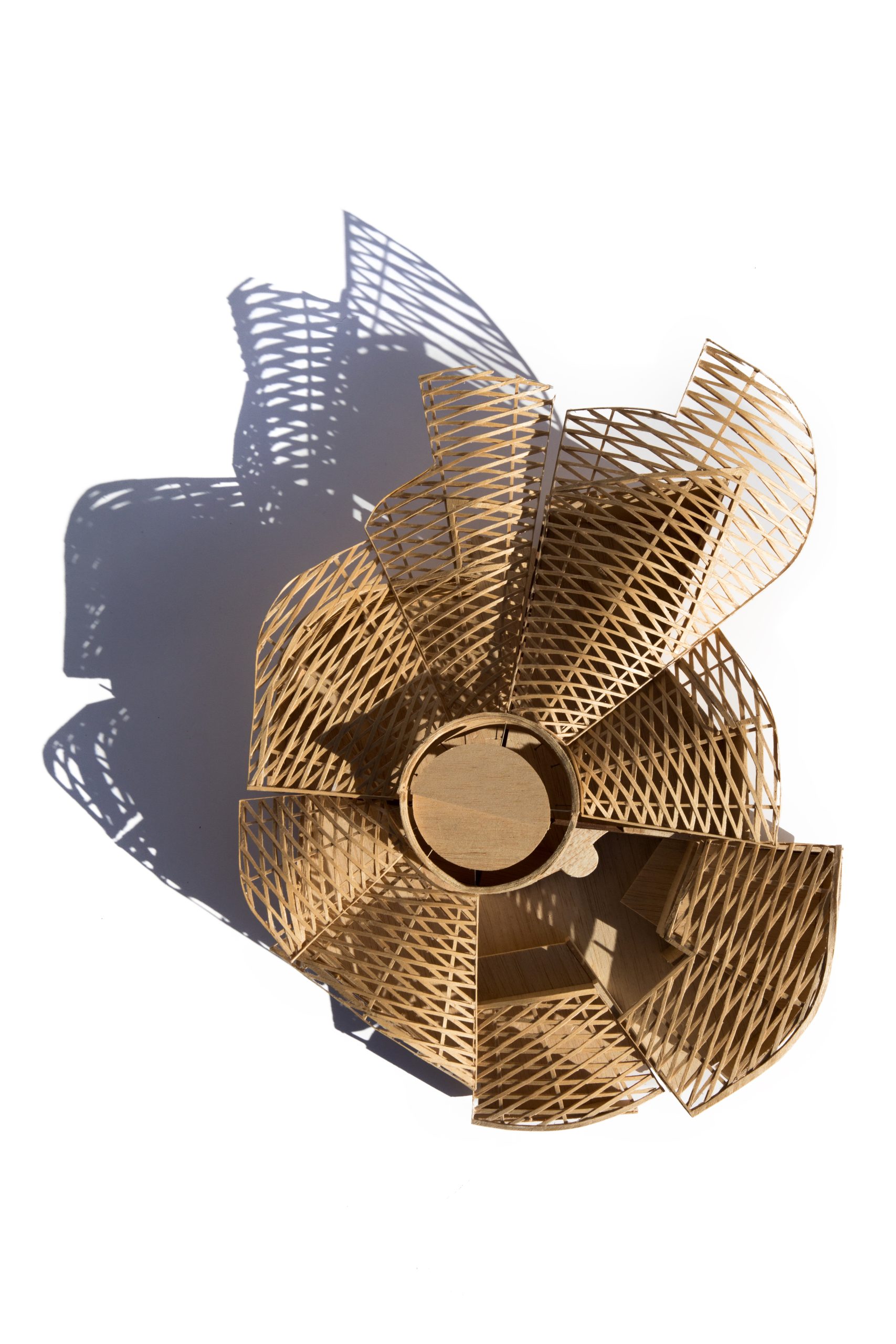 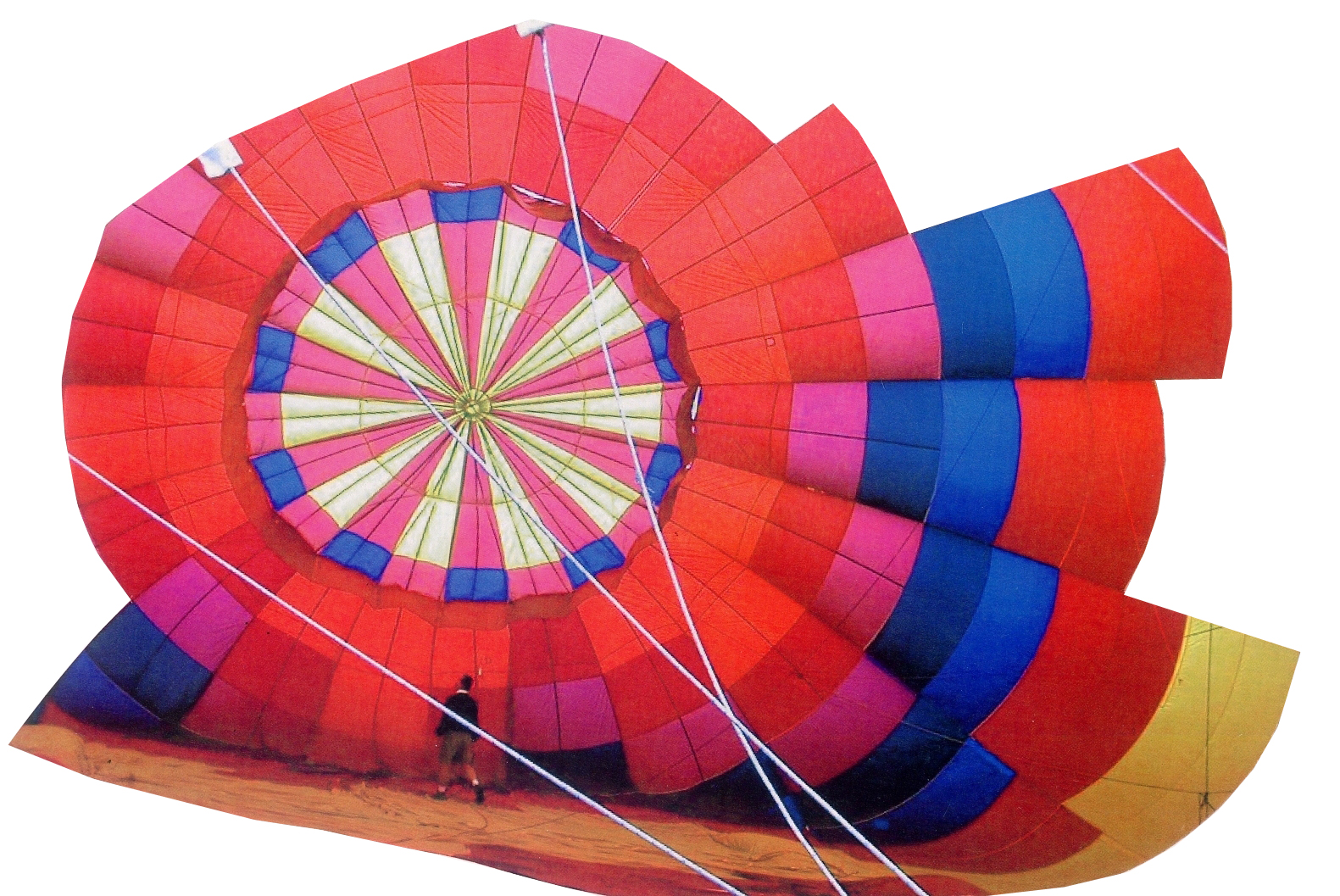 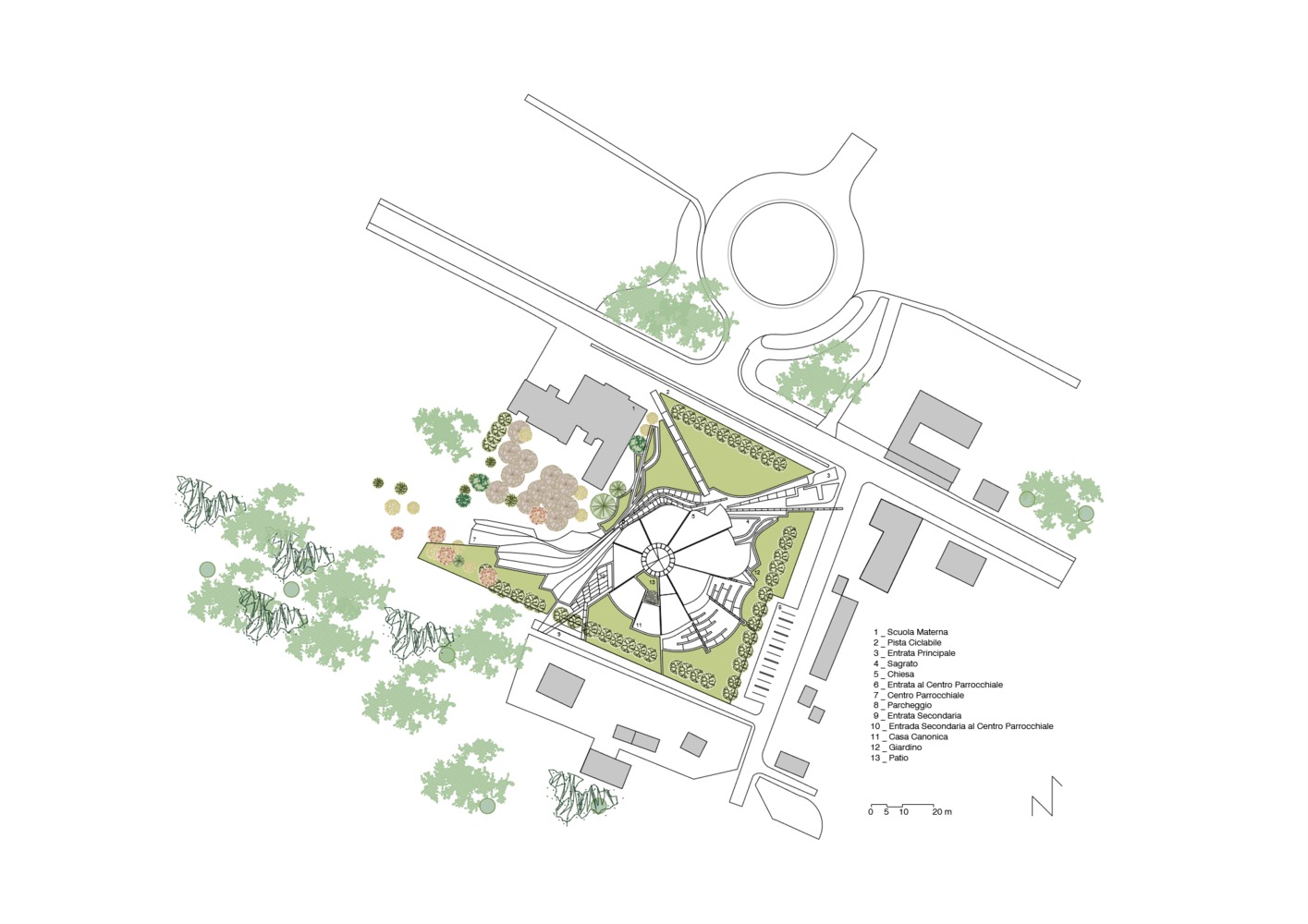 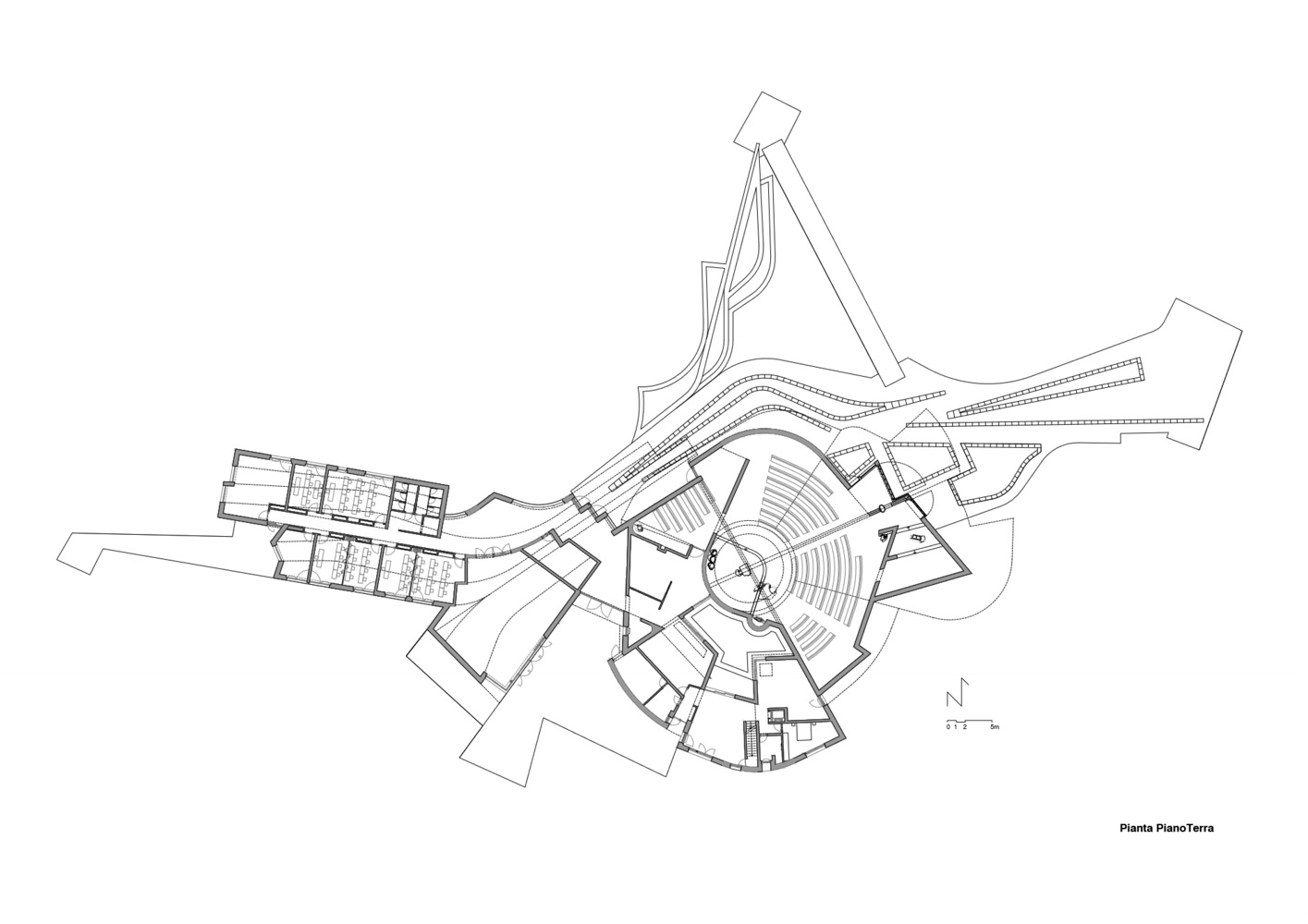 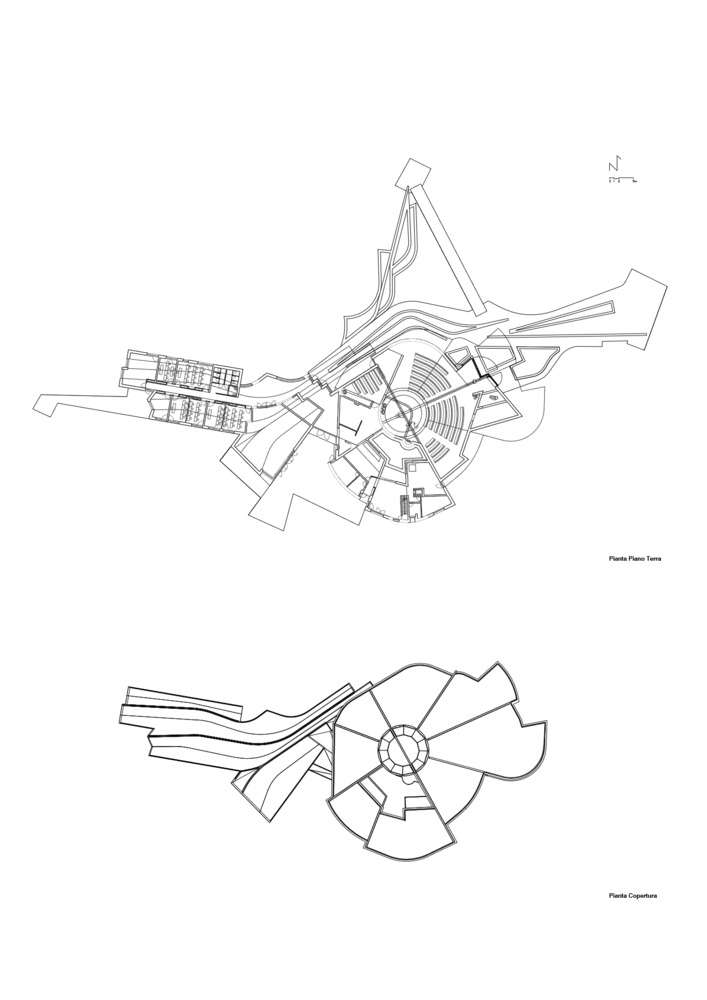 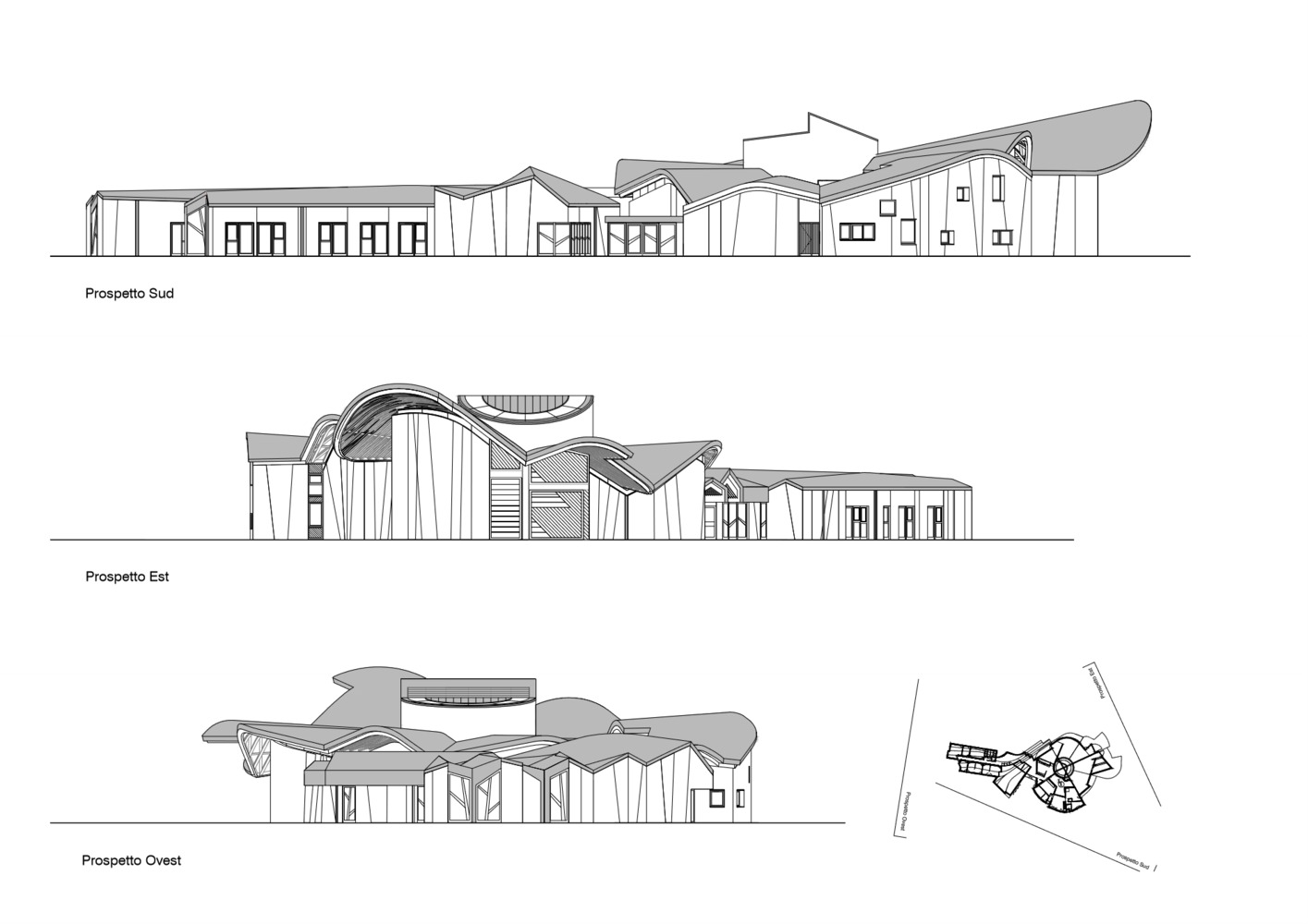 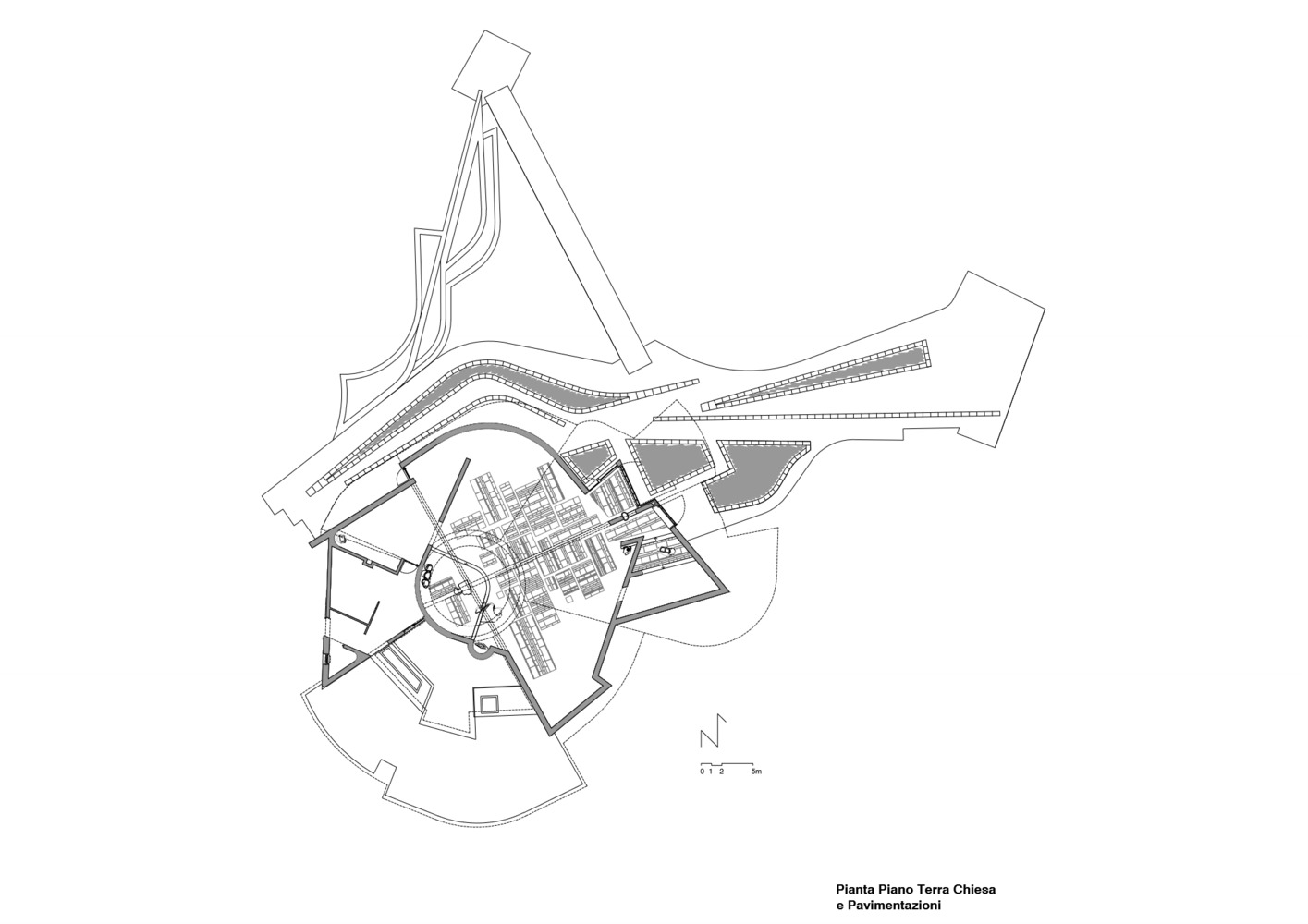 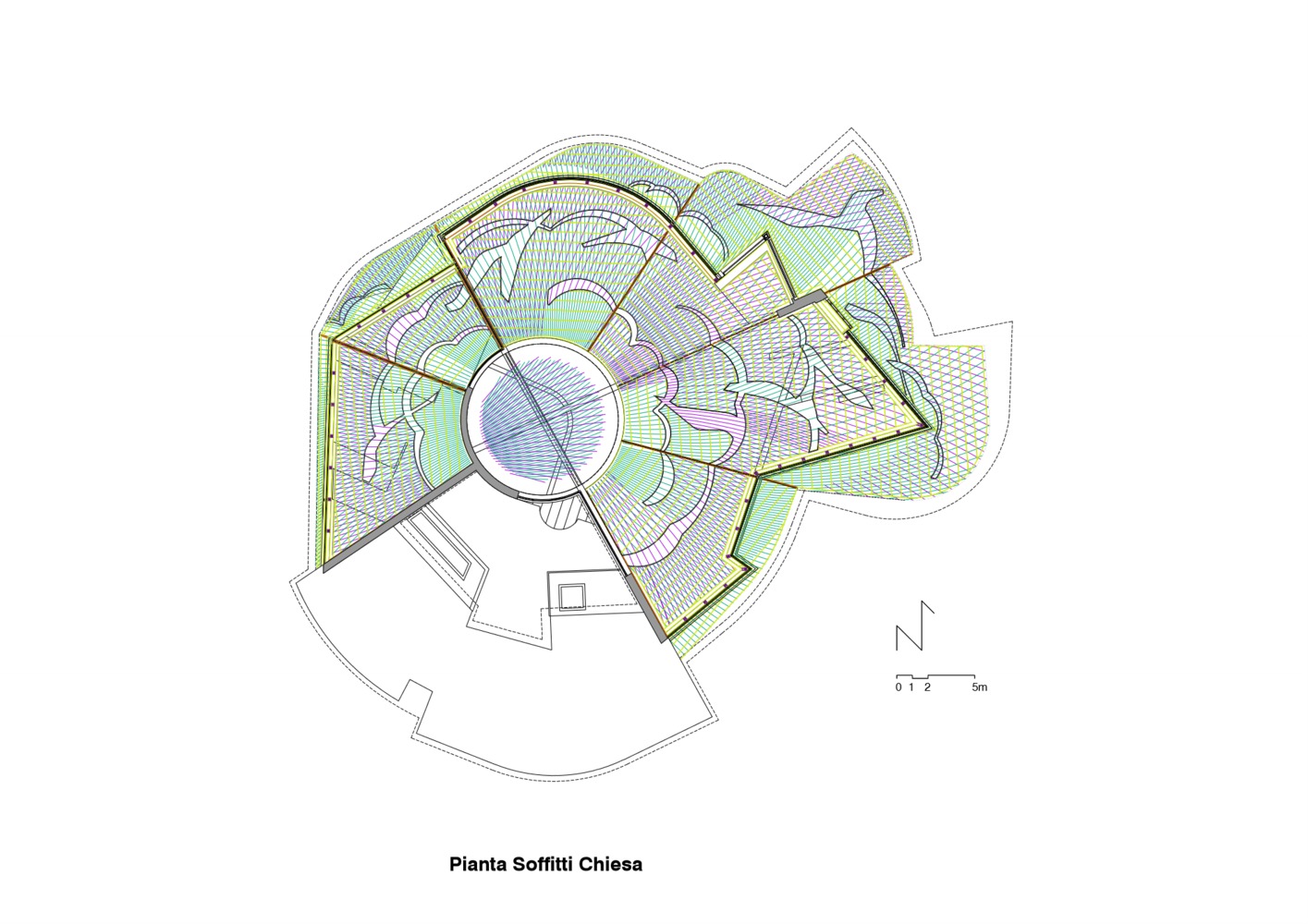 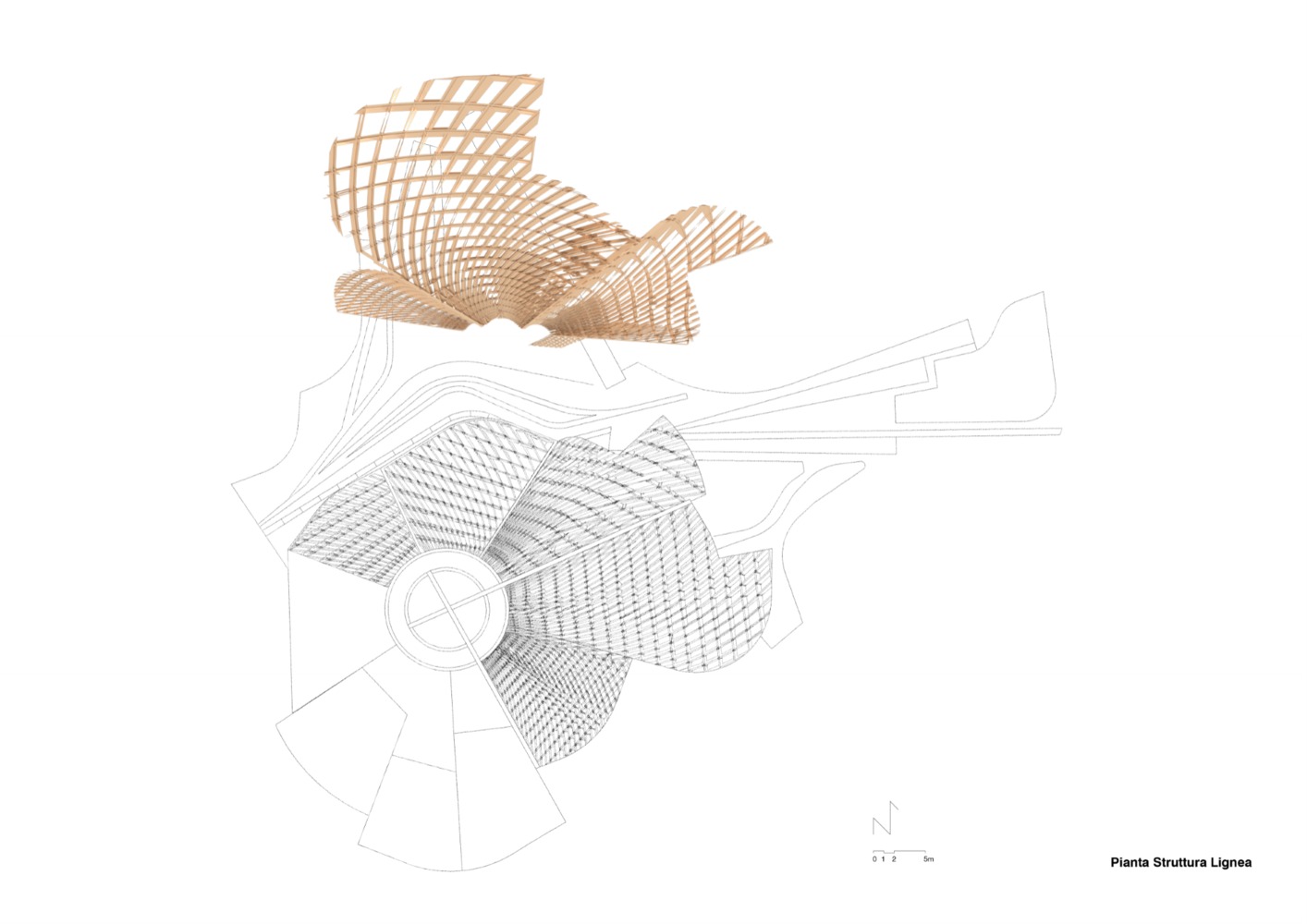