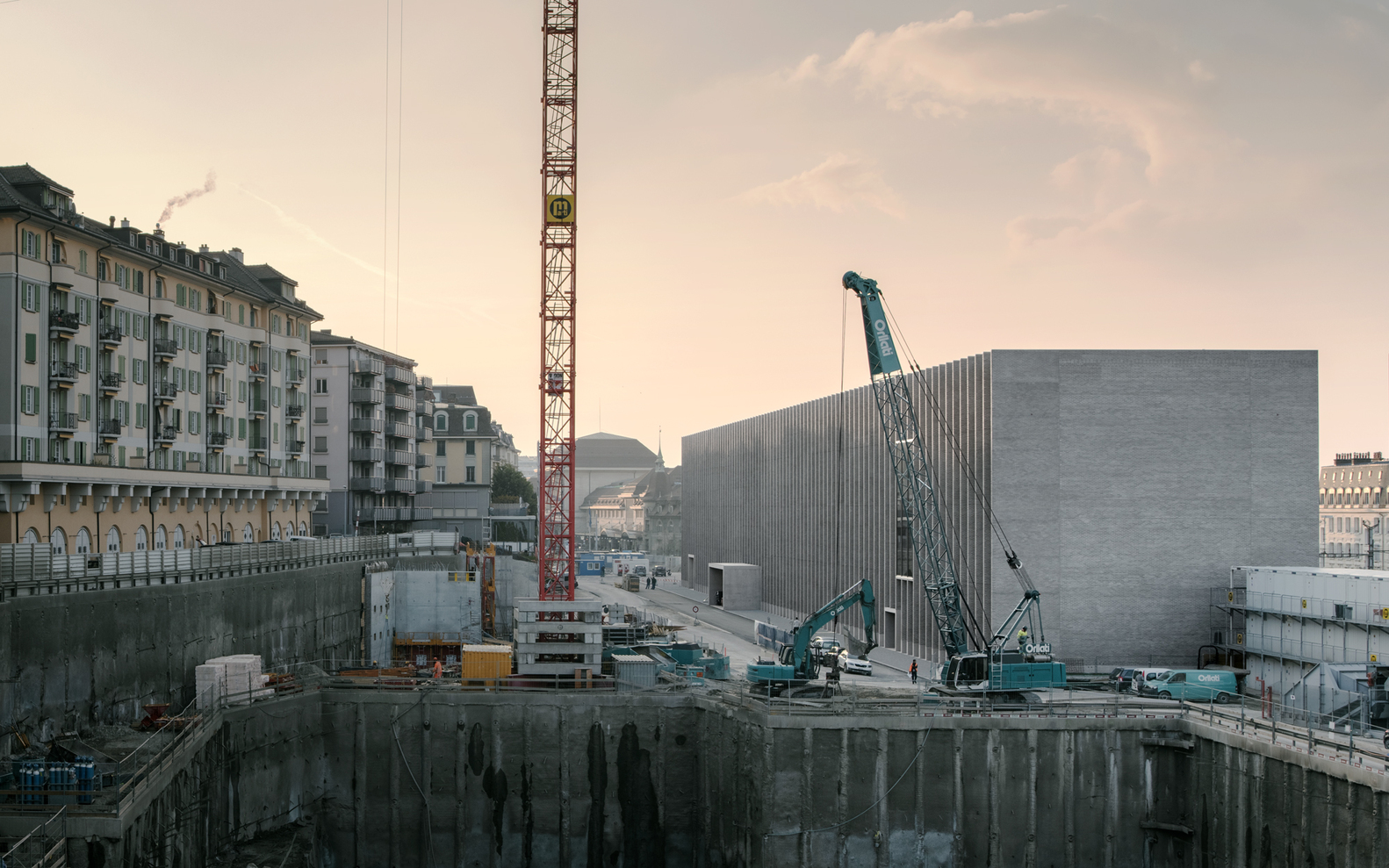 On the 5th of April the keys of the Cantonal Museum of Fine Arts of Lausanne were symbolically delivered to the Vaud Canton, one of the 26 cantons of the Swiss Confederation.

The official inauguration of the museum with the opening of the first exhibition, currently under construction, is scheduled for the 6th of October. The new museum is only the first stage of the Plateforme 10 project for the creation of an important artistic-cultural district, which foresees the completion, by 2021, of a public plaza, around which the new MCBA and a second building, designed by the Portuguese firm Aires Mateus and destined to house the Photography Museum Musée de l’Elysée and the Museum of Contemporary Design and Applied Arts MUDAC, will gravitate. Located near Lausanne’s city centre and train station, the complex stands on an area of over 20,000 sqm, once mostly occupied by an old 19th century train hall and some industrial buildings.

With the aim to create a connection with the city’s public spaces, the new project has been integrated in the scale of the urban fabric and connected to the existing train station plaza. The museum dialogues with the memory of the site and its former industrial condition through the design choice of a rigorous geometry – it is a regular three-storey parallelepiped – of a light grey brick cladding and of the preservation of some fragments of the pre-existing building, such as the large arched, embedded as a protuberance, a praise of the past, in the middle of the long façade facing the rails. Even the public plaza, pivotal element of the project, integrates some fragments of the industrial past of the site, such as the old rails and the turning plate.

Sculptural and monolithic, the new MCBA, the Cantonal Museum of Fine Arts of Lausanne designed by firm Barozzi / Veiga, features a long, hermetic façade facing the station, almost completely blind, except for the large central window that illuminates the entrance of the museum, and a more open façade, facing north, in connection with the new public square, characterized by the presence of a sequence of full-height vertical fins that break the compactness of the building and conceal large windows.

The fins, made of the same light grey bricks like the rest of the façade cladding, prevent direct sunlight from ever entering the most light-sensitive zones of the museum and allow to establish an atmosphere lighting on the first two floors, while the upper floor is bathed in the natural light coming from modular trapezoidal north-oriented sheds. The ground floor, developed as the extension of the public plaza to underline its central role in the Plateforme 10 masterplan, shelters the entrance, the reception, an auditorium, a gallery for temporary exhibitions and the social services like bookshop, restaurant and café.

Once inside the double height foyer, the saved fragment of the pre-existing building, that is the volume with the large arched window facing the station tracks to the south, reveals its role as a primary structural element, organizing the main circulation to the two upper floors and separating the permanent exhibitions on the East side from the temporary exhibitions on the West side. The museum rooms, with their white wooden floors, walls and ceilings, have been designed to provide the optimal conditions of light and positioning of the works. 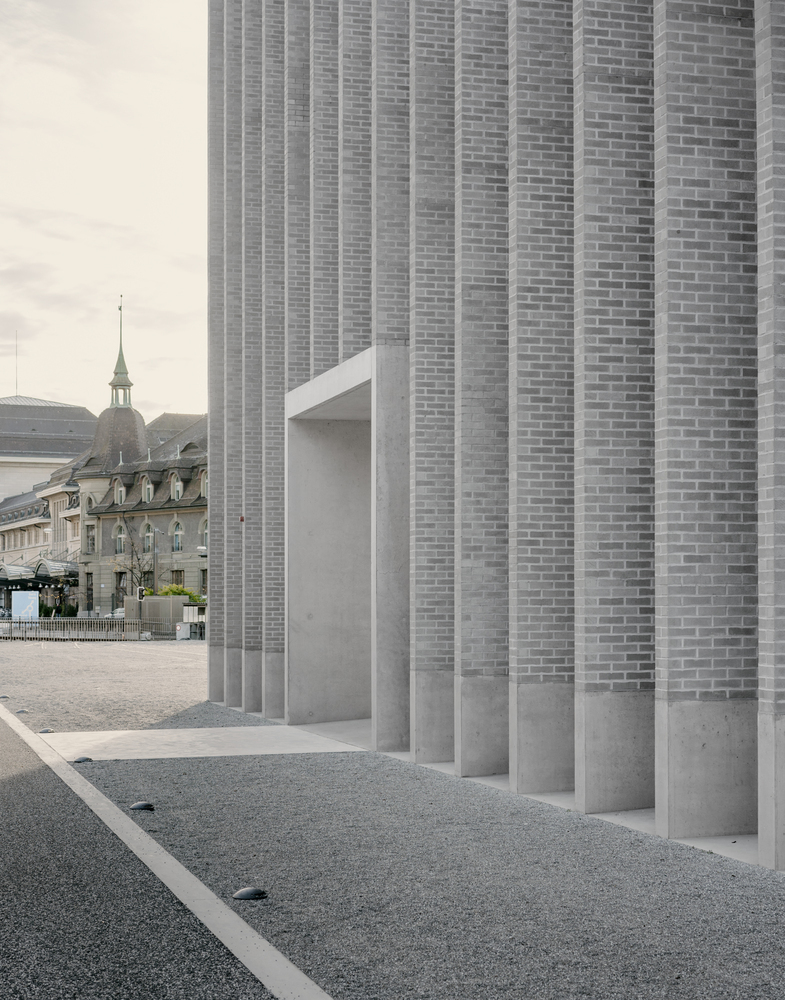 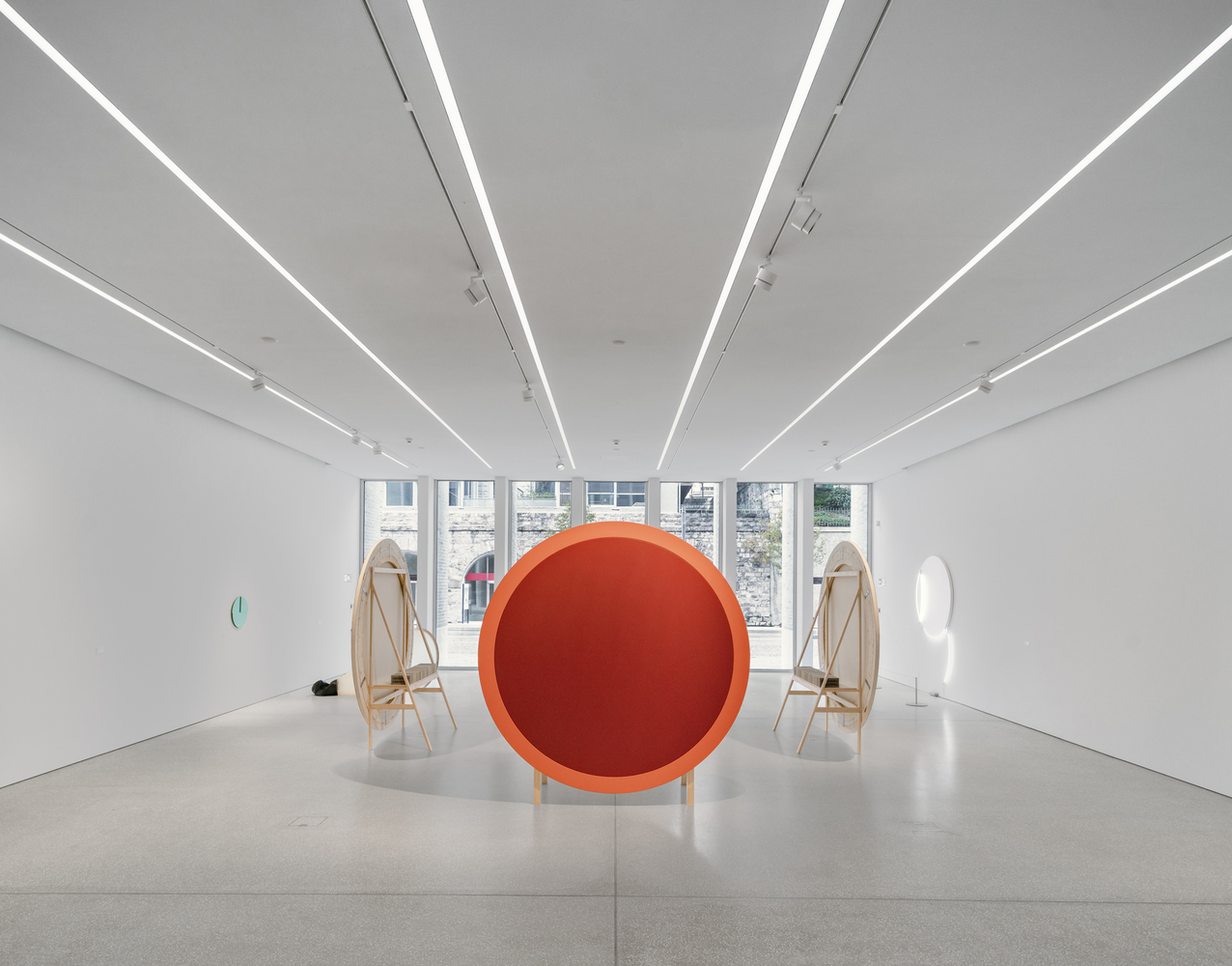 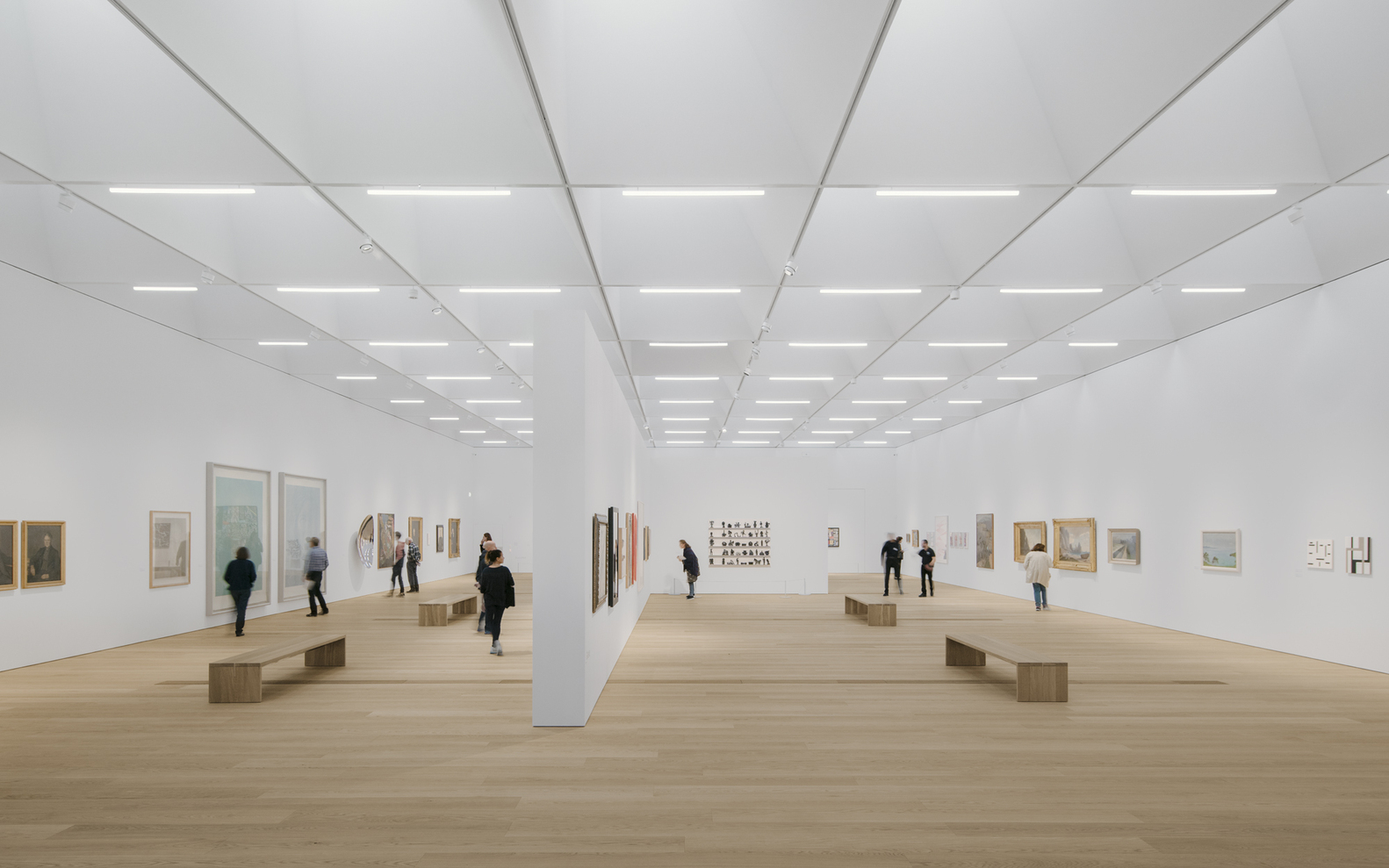 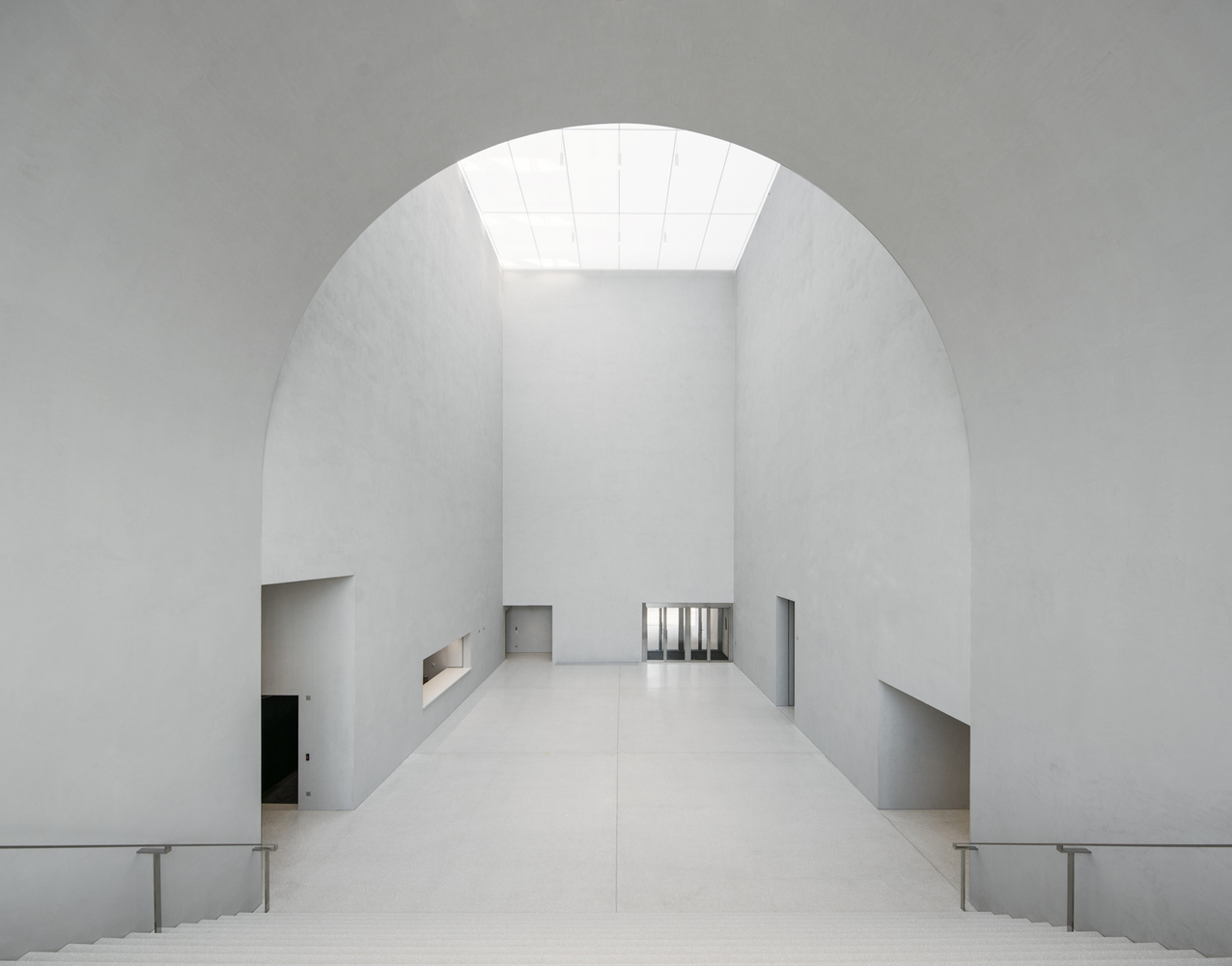