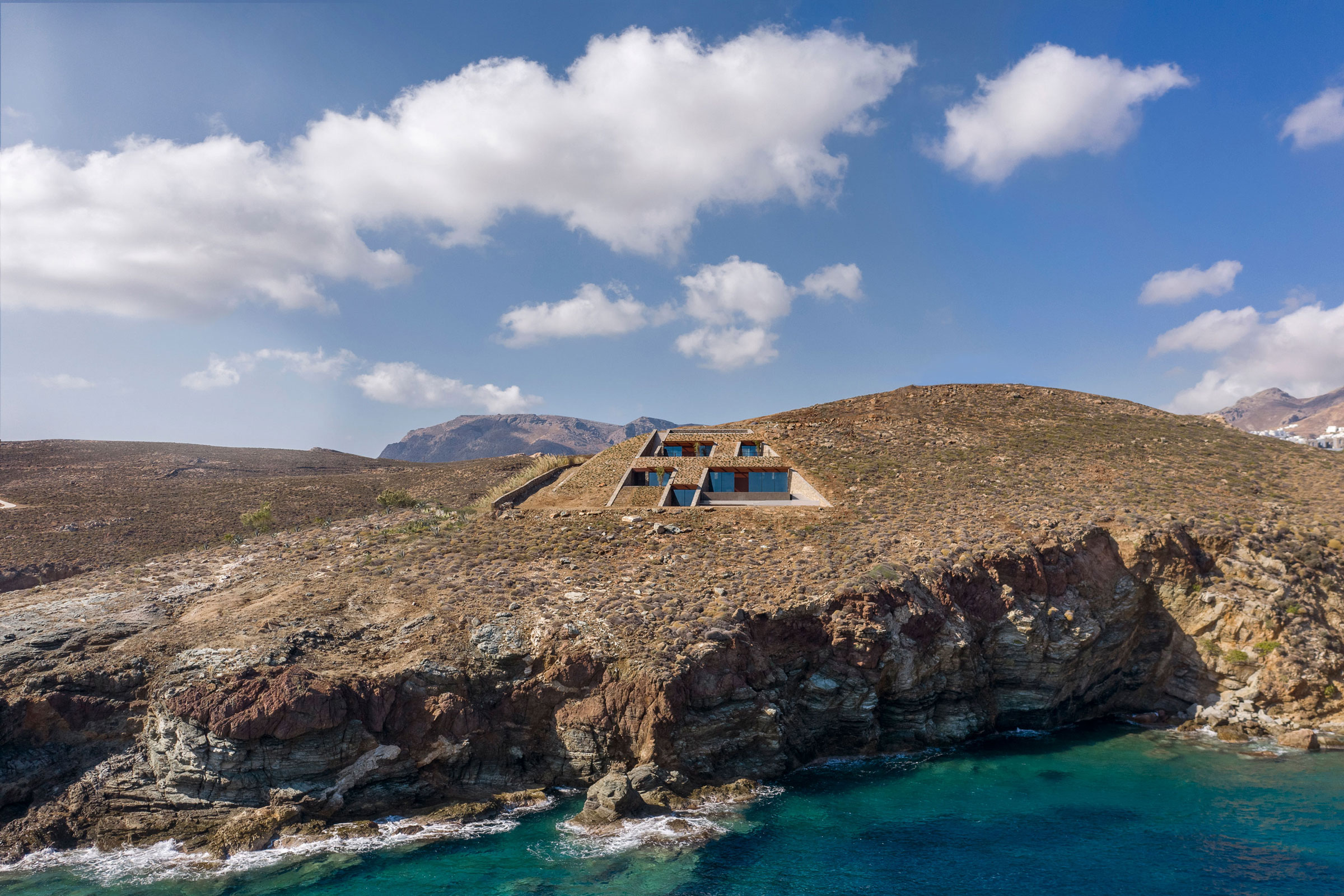 Text description provided by the architects. NCaved is located on a small secluded rocky cove on Serifos Island, seemingly hovering just above sea level. The need to create a protected shelter, at a location of disarming view, but openly exposed to strong north winds, led us to the decision to drill the slope, instead of arranging a set of spaces in line at ground level.

We applied a rectangular grid to the slope to produce a three-dimensional “chessboard” of solids and voids that accommodate and, at the same time, isolate the residence quarters. This strict geometry is discontinued with the rotation of the last axis of the grid, which provides the living area with ampler view. Shifting the axis intensifies the sense of perspective significantly, and thus the imprint of the residence appears minimized at the conceptual end of the ascent.

Longitudinal walls of dry stone outline and protect the interior and exterior spaces. They consist the vertical borders, which lead the visitor’s gaze to the horizon line. In contrast to the sturdy stone walls, the transverse facades are light, made of glass and can open along their entire length. The front is fully open to the east view, while the rear windows frame indoor gardens, enhancing the air flow and letting light into the residence.

Lighting and ventilation with front and rear openings, stone, a planted flat roof, suitable insulation, as well as energy-efficient glass panels adds to NCAVED excellent bioclimatic features. The residence is divided into three levels: bedrooms, living rooms, and a guest house. The first two communicate internally, while the guest house is independent. An in caved staircase connects the three levels externally and leads to the main entrance, located at the living room loft.

They result from severing and removing part of the rock. This rough feeling of a natural cavity was what we aimed to recreate with our choice of materials and color palette. Stone, exposed concrete, wood and metal are used with precision to create coarse inner shells.

Perforated filters on the facades and the floor produce shadow patterns. Paired with large reflective mirror surfaces, they make up an eerie atmosphere in the private areas of the residence. Finally, the pergolas seem to float detached from the surface, denoting the physical aspect of the residence, which integrates to the landscape, yet maintains a dynamic presence. 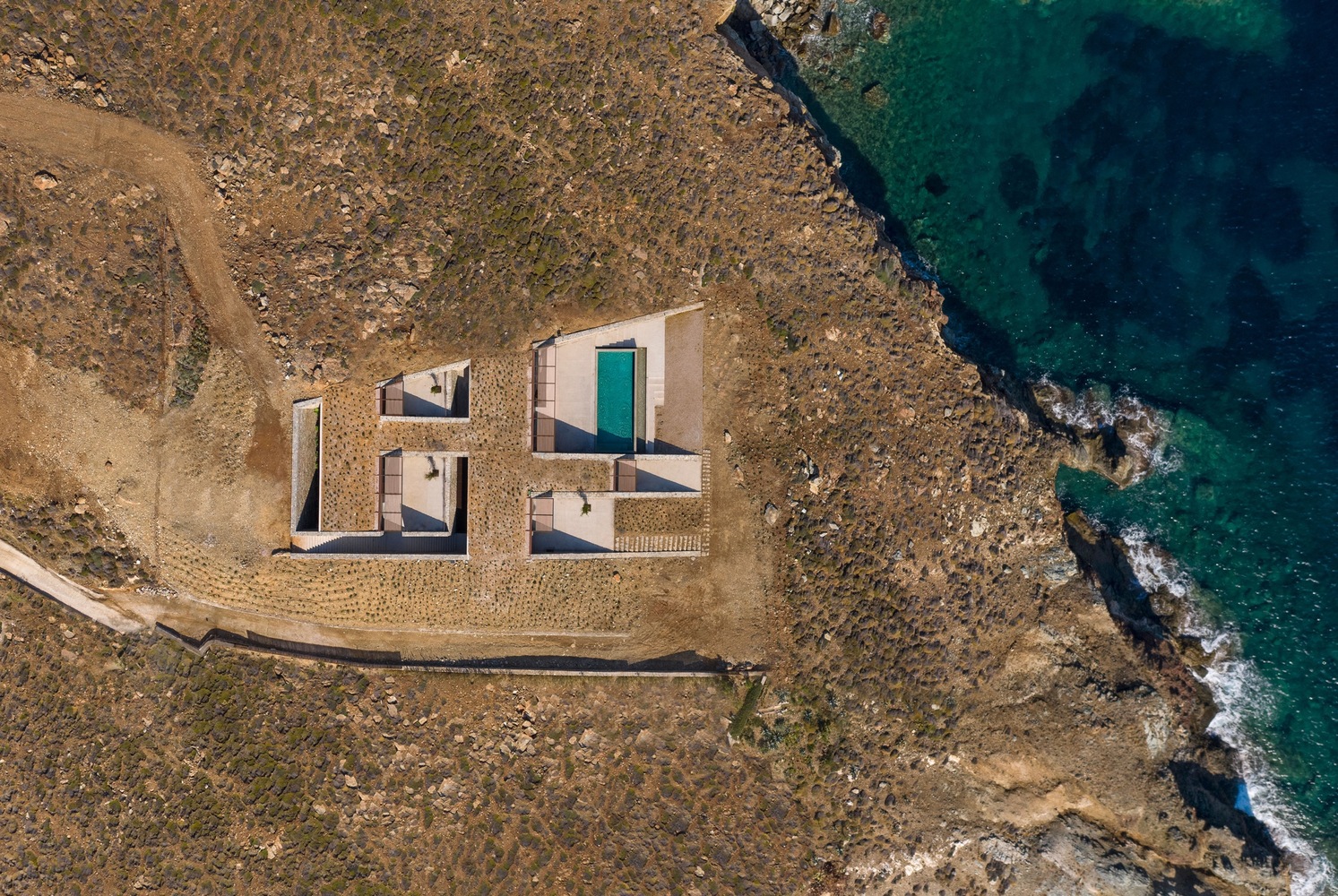 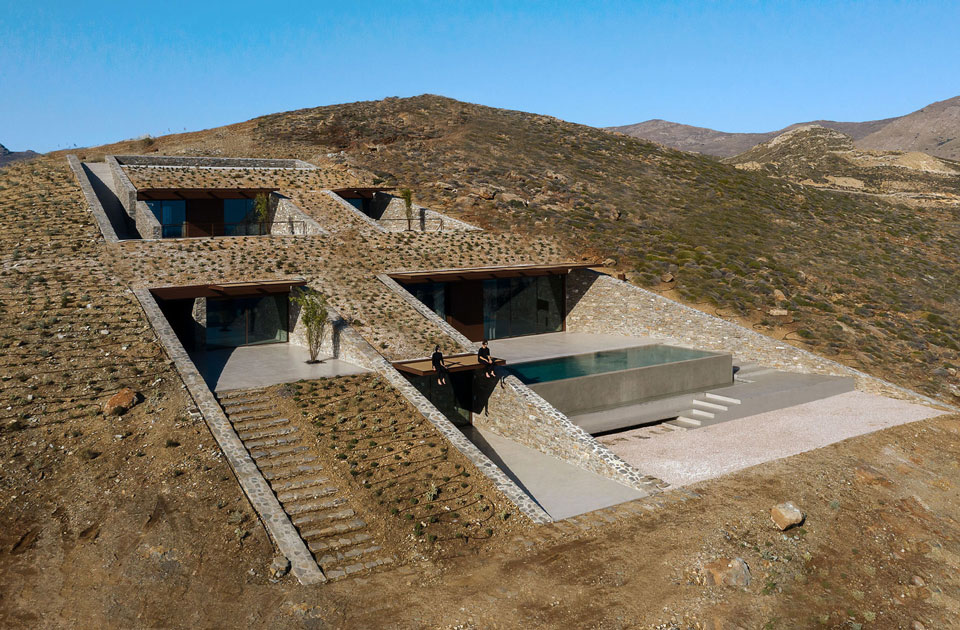 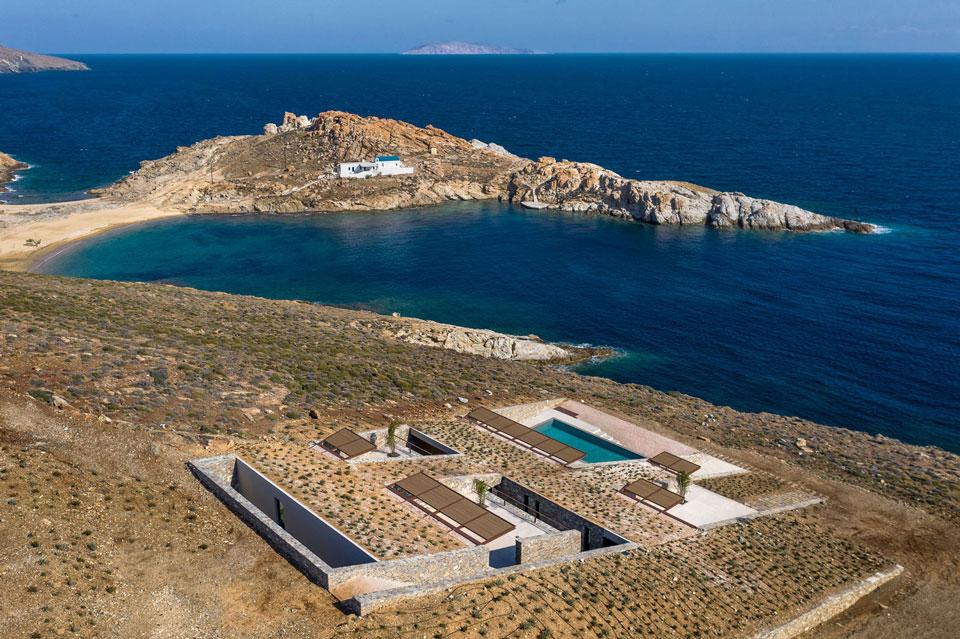 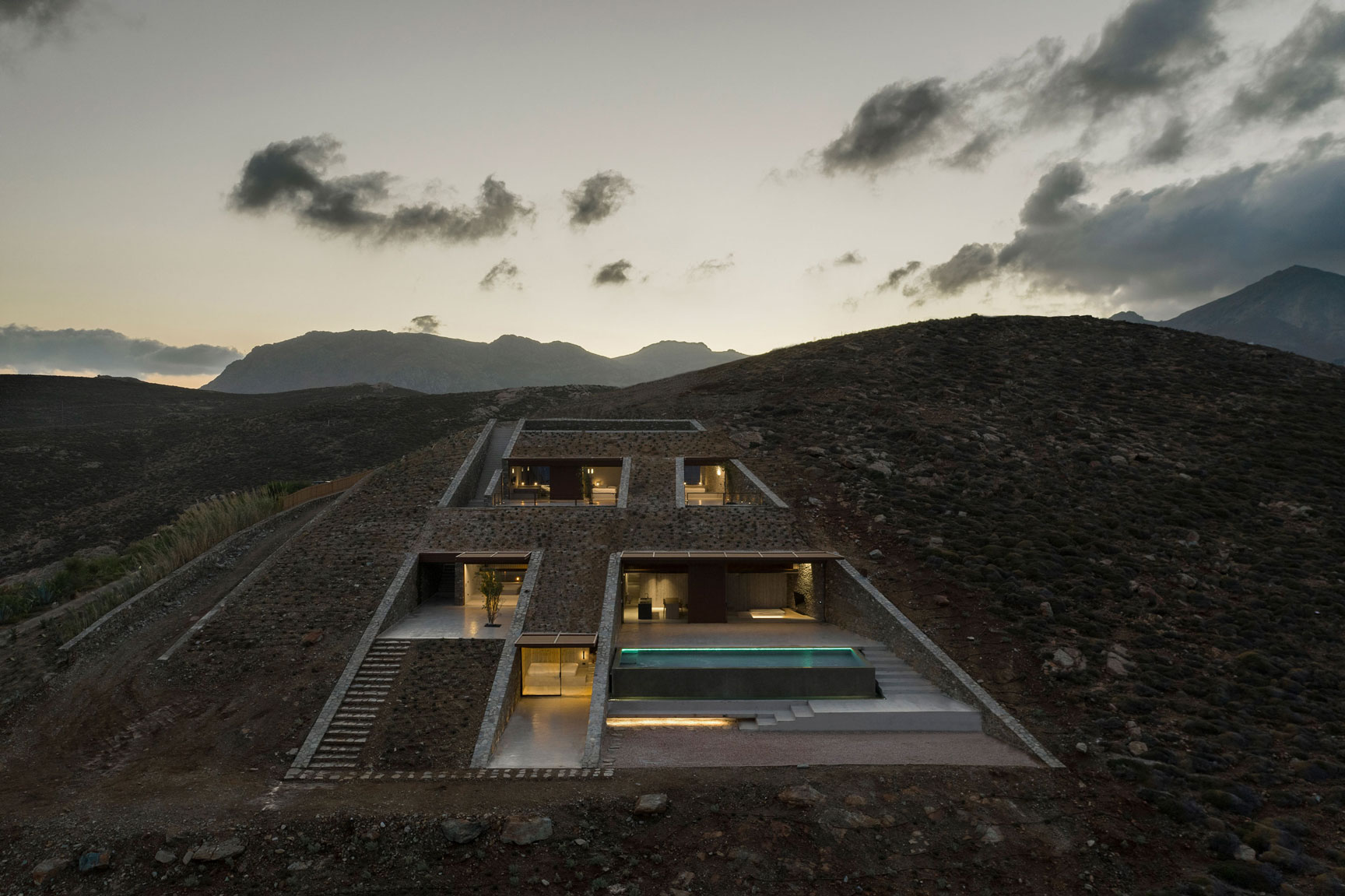 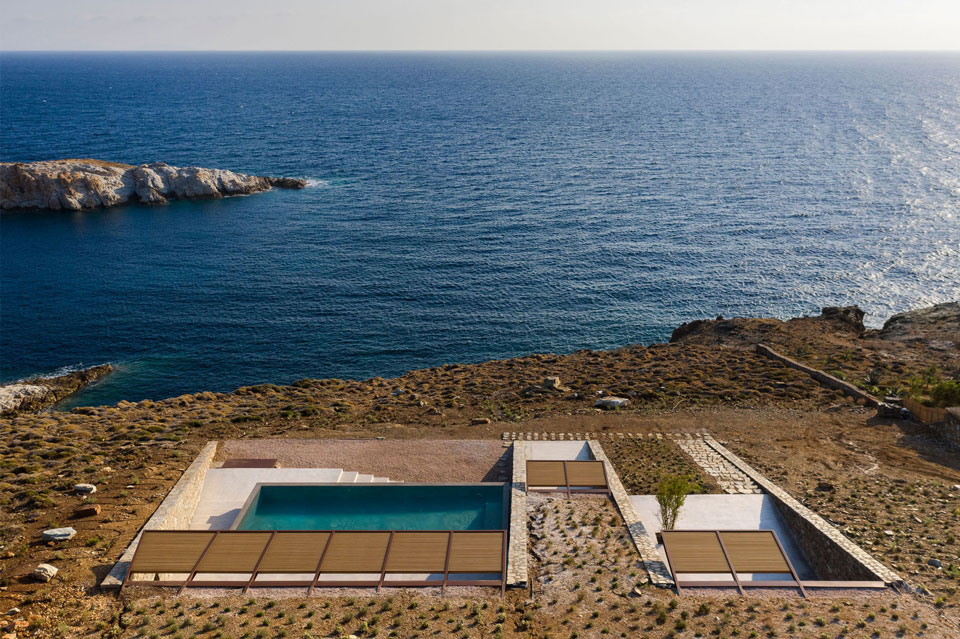 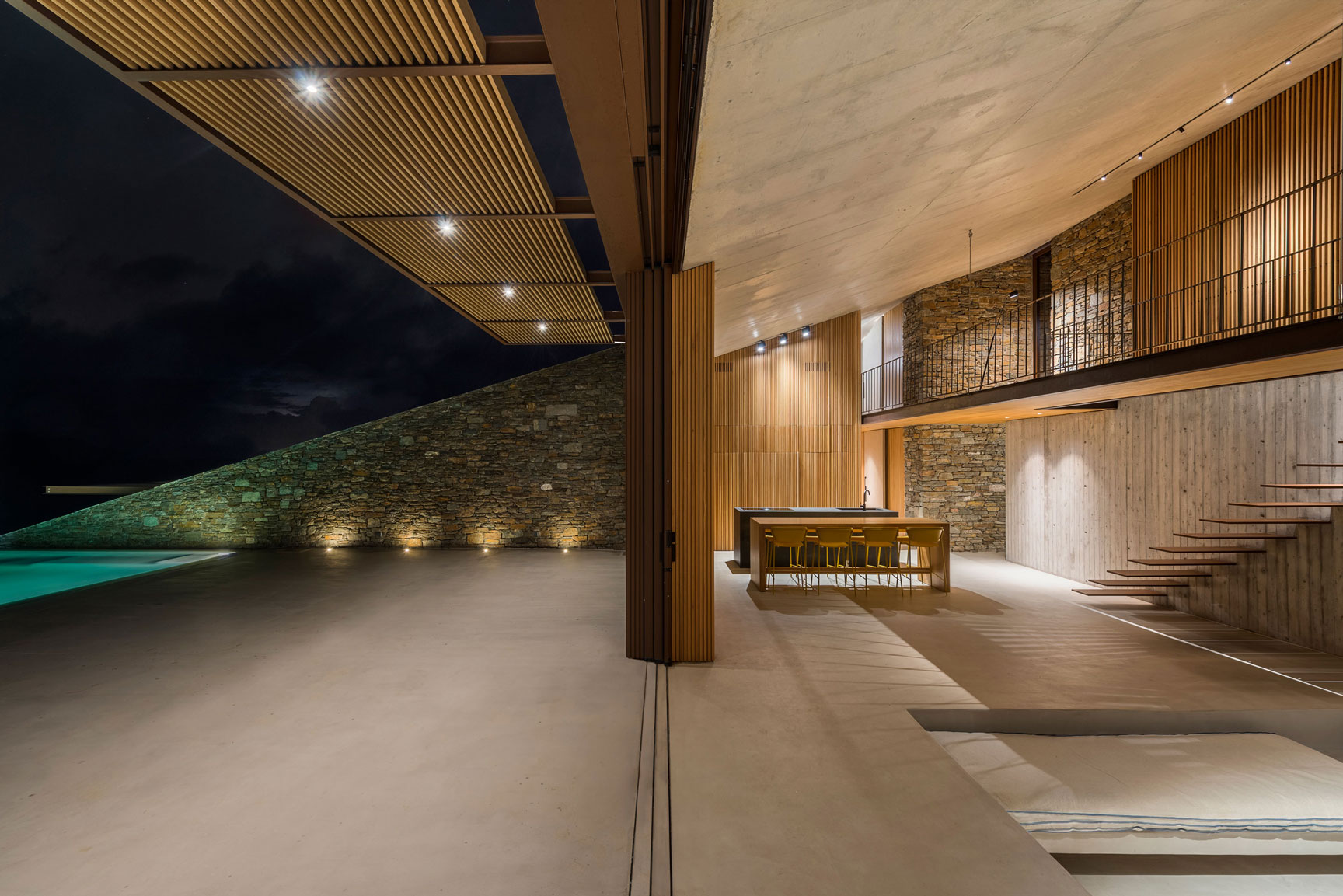 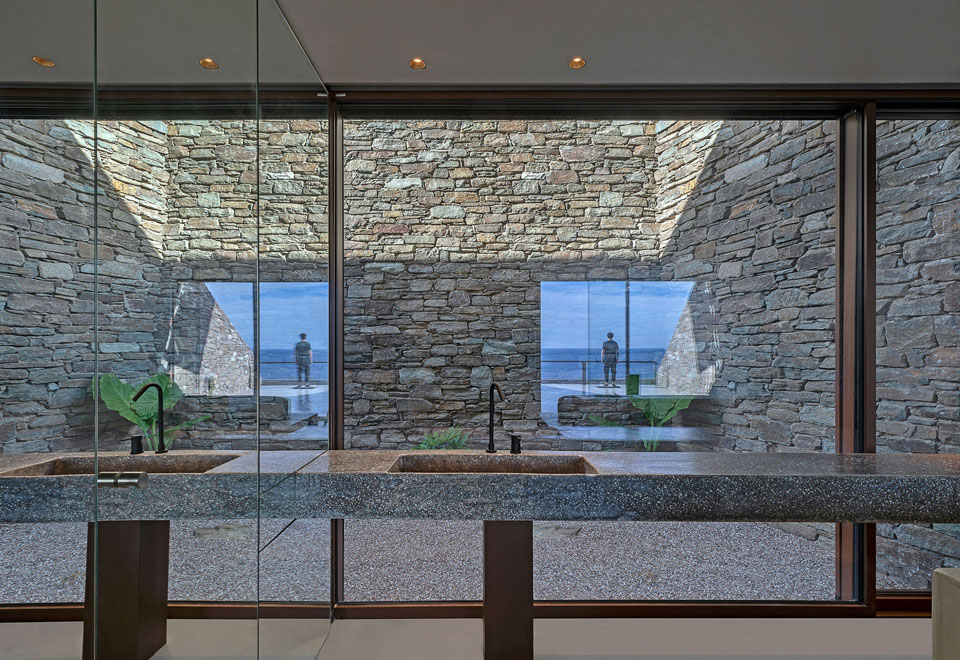 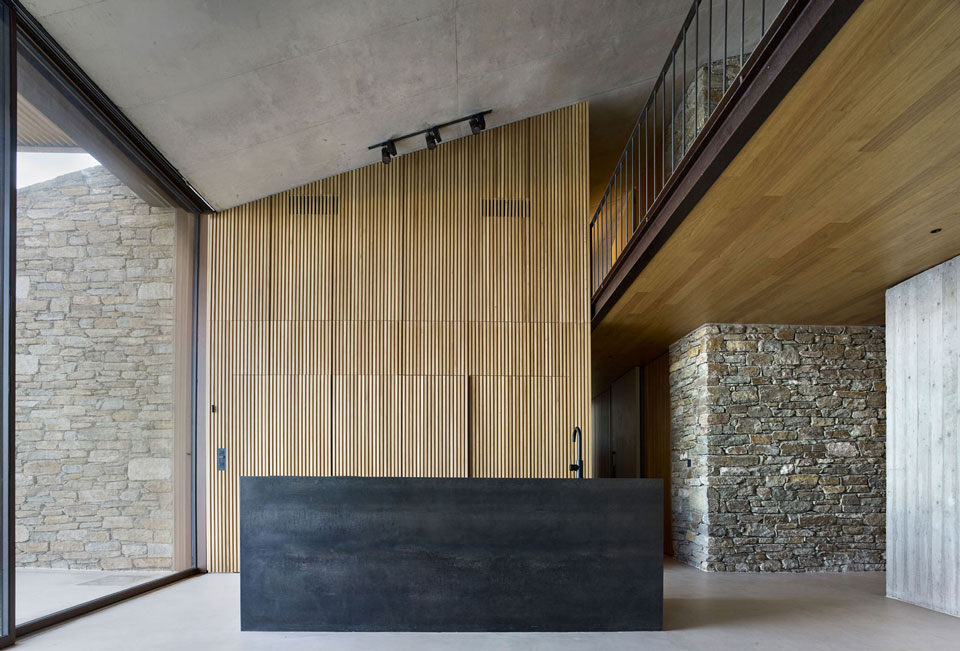 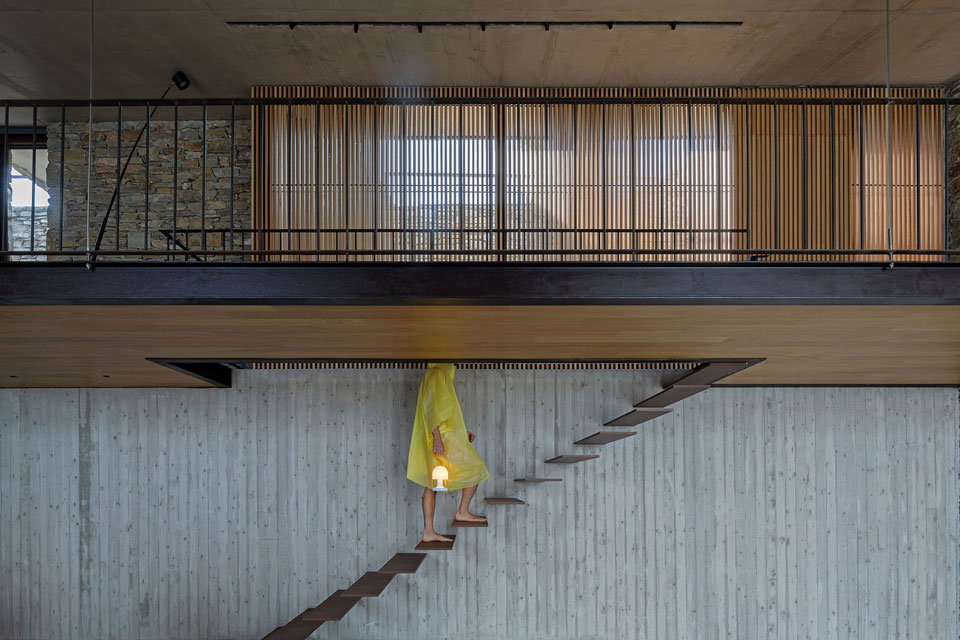 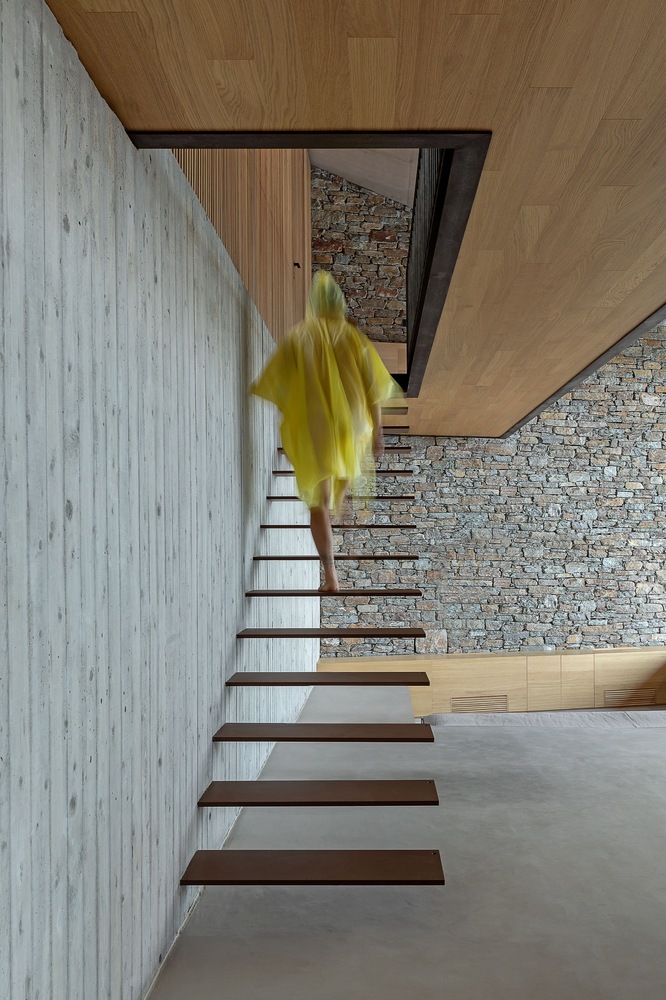 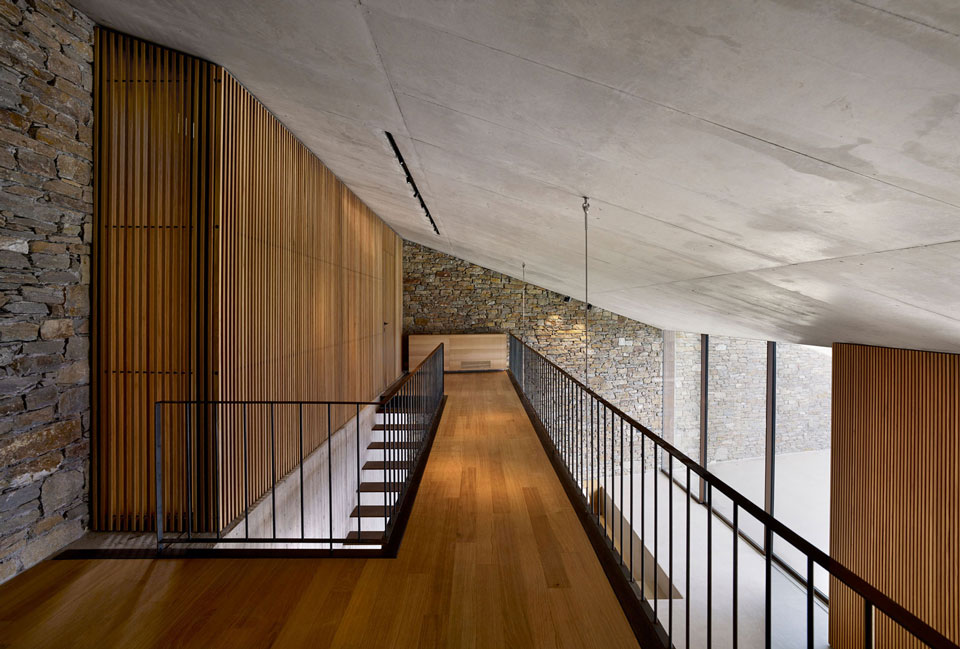 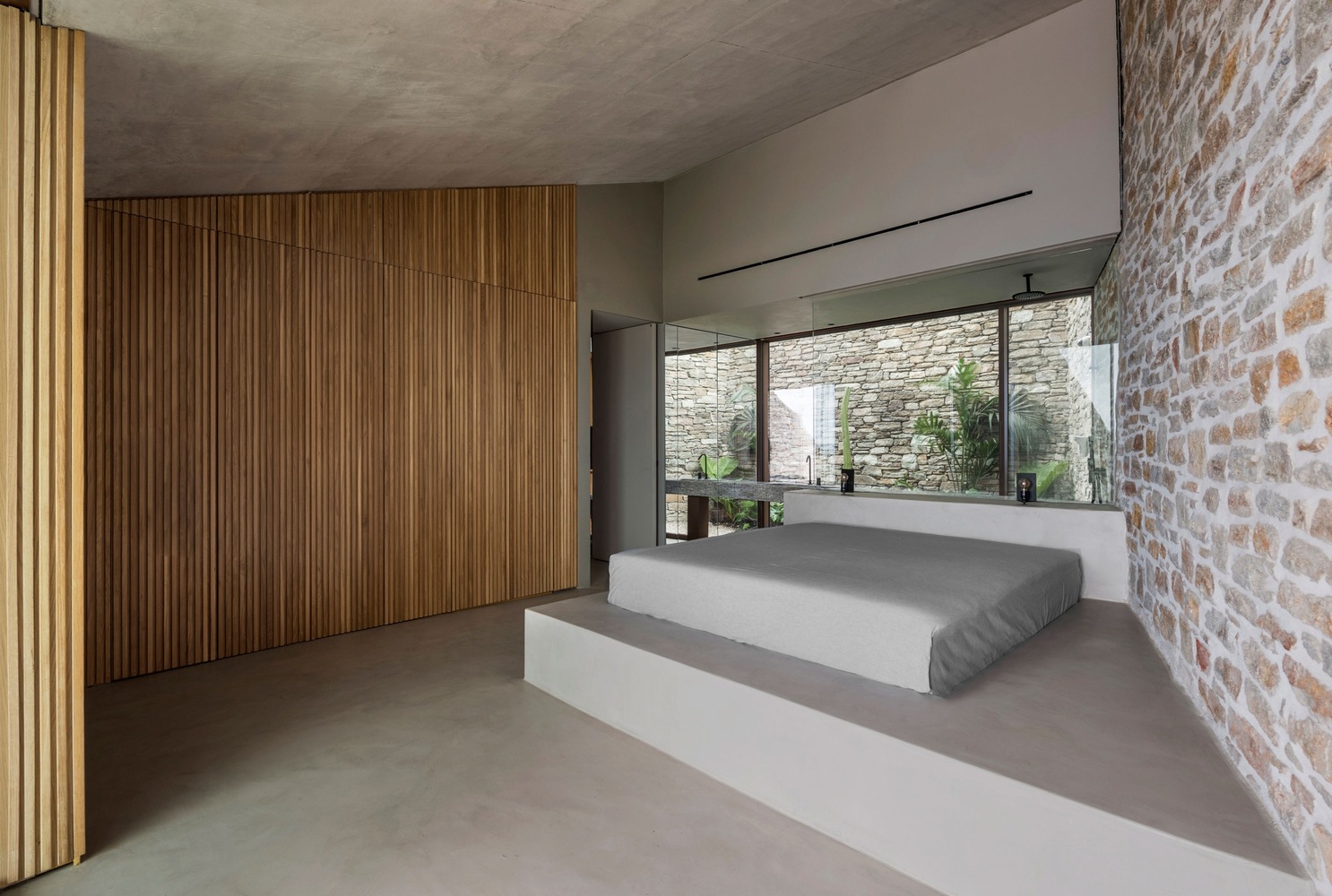 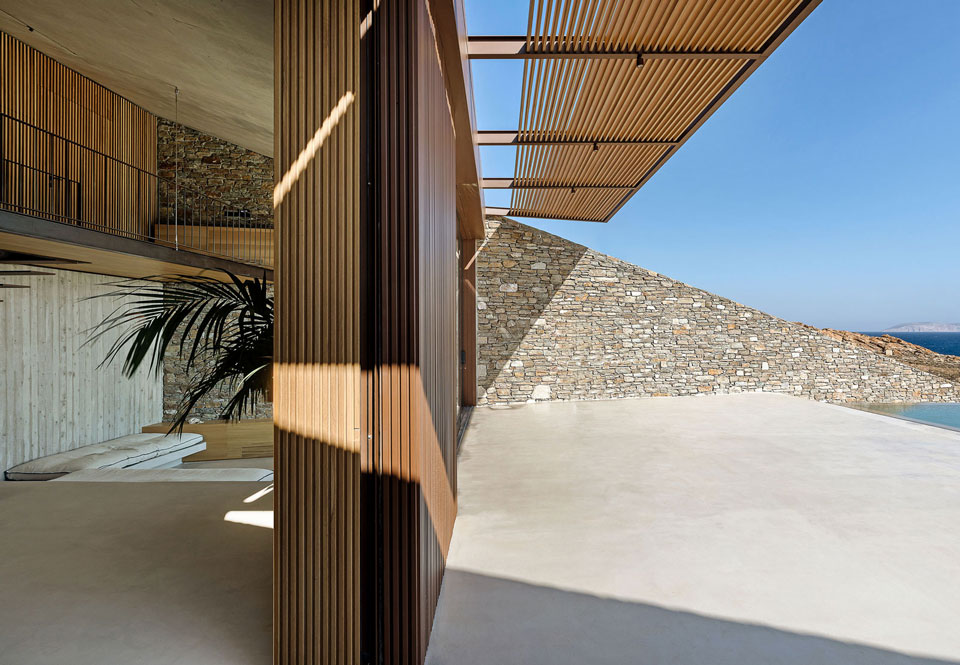 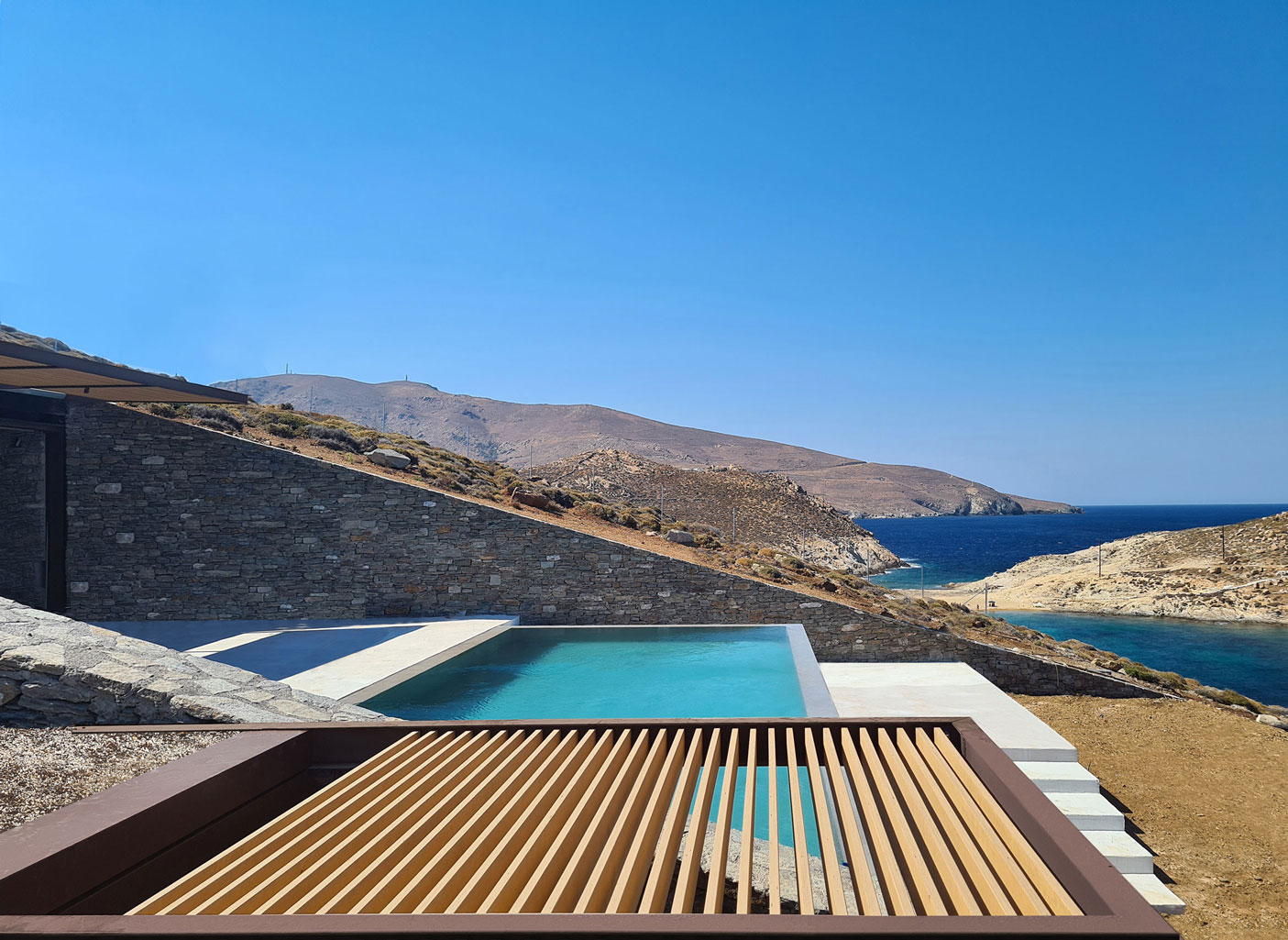