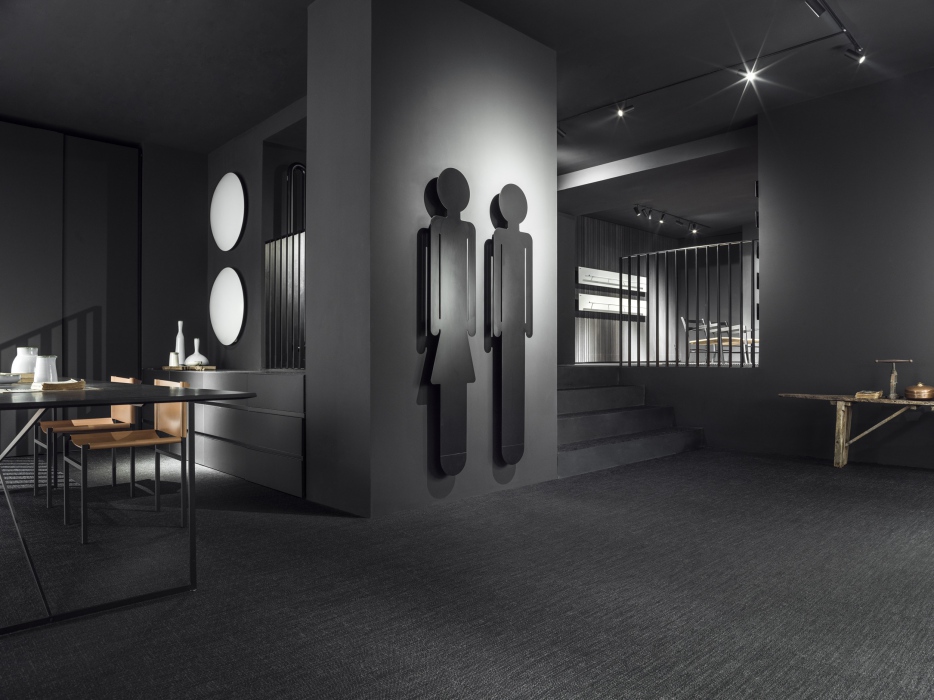 Antrax IT opens its first single-brand showroom in Milan

The “Black & White” image with which Antrax IT inaugurated last year the important restyling of marketing and communication tools, also dresses in its aesthetic essentiality the new single-brand showroom in via san Damiano 5 in Milan, in the heart of the Durini district / Monforte. In fact, Black and White are the two “non-colors” that tell the story of the company’s radiators also in this new context, which thanks to the particular combination of design, energy saving, sustainability and high performance, have contributed to revolutionizing the world of heating. furniture.

To take care of the interior design of the space, with over 180 square meters on two levels, enhanced by two windows on the street and a view overlooking the prestigious context of via Santa Cecilia, the CEO Alberico Crosetta commissioned the architect Victor Vasilev, formerly Flaps radiator designer. In fact, Crosetta declares: “The visual link to the most recent corporate image, in particular to the catalog presented in 2020, was the reference driver of the project that was born from a continuous comparison with Victor. We wanted a space strongly linked to the Antrax IT identity, characterized but at the same time extremely flexible and capable of adapting over time to different needs: what emerges takes into account all these objectives “.

The space, in fact, is not just a showroom to host the numerous collections, but a container for hosting events and exhibitions, even in the world of cinema and art to which the company has always been linked. The products – designed by great names including Piero Lissoni, Matteo Thun & Antonio Rodriguez, Daniel Libeskind, Dante O. Benini and of course Victor Vasilev – are presented along the walls and thus occupy only the perimeter of the space, according to an almost museum-like approach. , leaving guests the possibility to move freely inside it or to easily adapt it for other uses.

“The theme of the contemporary art gallery, a further source of inspiration for the showroom, is therefore mixed with the idea of ​​a flexible place for work and discussion, where our team can guarantee the best possible assistance and introduce visitors to the Antrax world. IT. Color, which has always been with us and which at first glance does not seem represented here, then constitutes the other soul of the space, where the doors to customization gradually open up, making it discover to architects, customers and distributors. We have prepared a material library that offers many of the two hundred shades available for radiators and from September we will be active with a program of appointments on color that will accompany us until the 2022 Salone. We are very happy to enter the panorama of Milan with such an ambitious project. and we do it in this 2021, the year of our 25 years of activity “.

The envelope of the new Antrax IT showroom is a continuous and connoted background: the walls are partially covered by a boiserie that creates depth and a geometry of lights and shadows, on which the radiators, proposed in the same shade of black or in color, become the protagonists. Matt White. Thus, best sellers such as Serie T, Waffle, Android, Byobu, Flaps, Tubone, Teso, to name a few, follow one another, occupying both the ground floor and the basement, characterized by the same design language. Finally, the boiserie is surmounted by linear LED bodies and contrasts with the top of the wall and the false ceiling, in black, according to the typical mood of the most recent Antrax IT style.

On the ground floor, a large counter completely covered in black Marquina marble is located in the center, in front of the metal staircase leading to the lower floor, where there is a second counter, a large meeting table and the material library, where the range of finishes is presented. and Antrax IT models, which can be selected in over 200 color variants and in a wide range of dimensional possibilities. 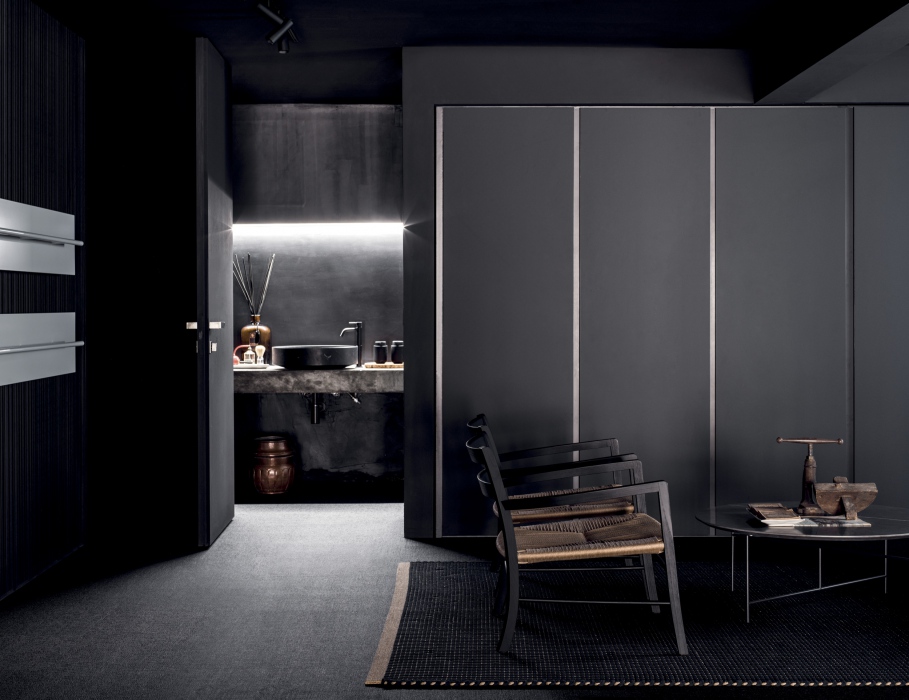 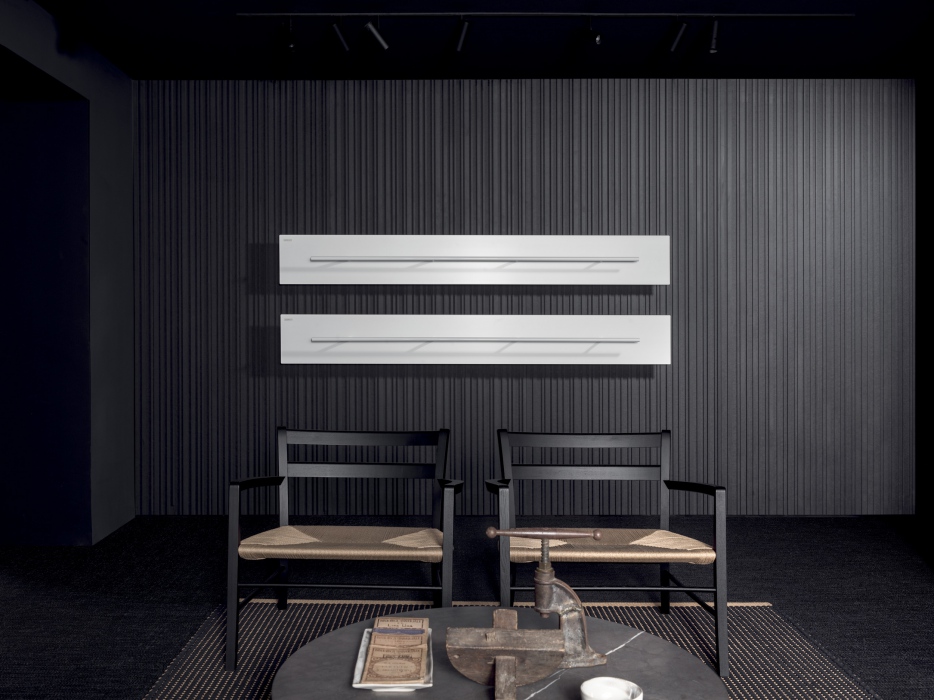 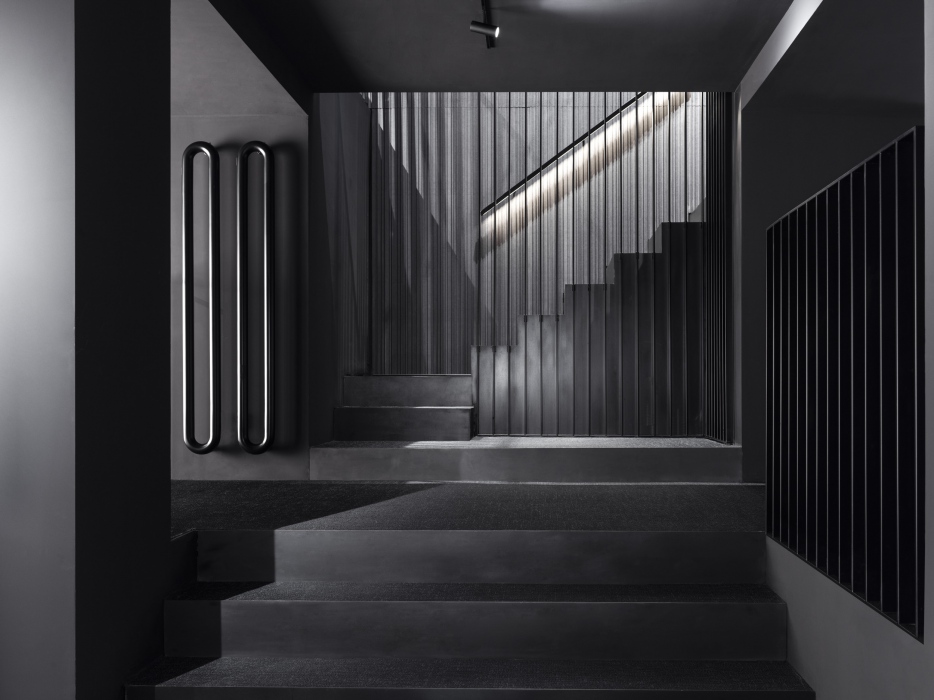 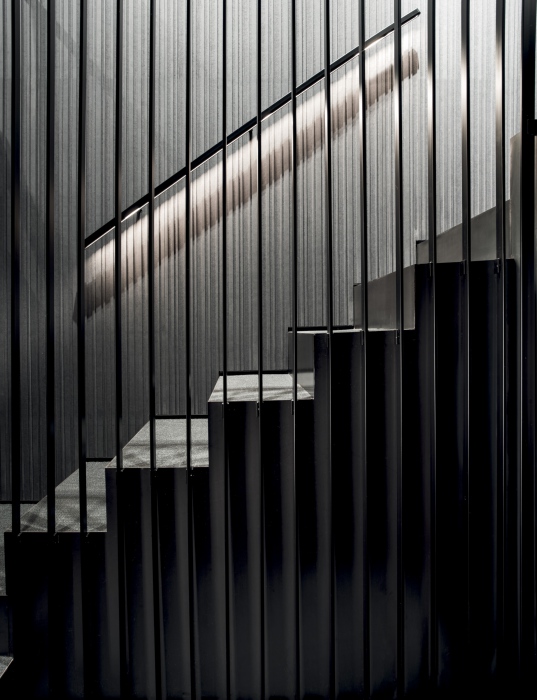 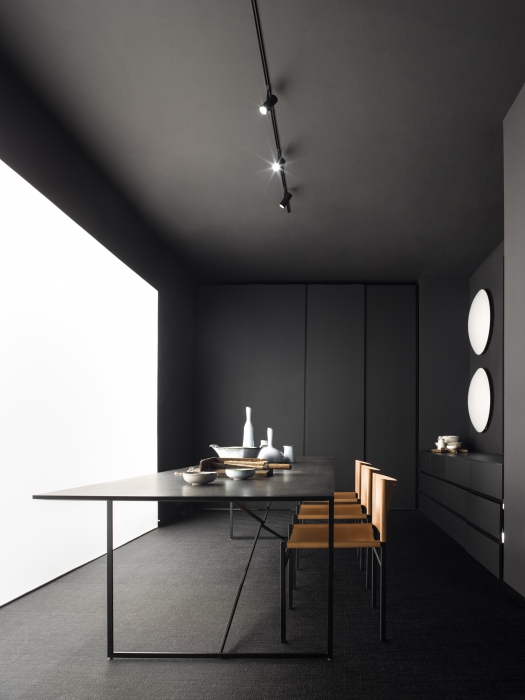 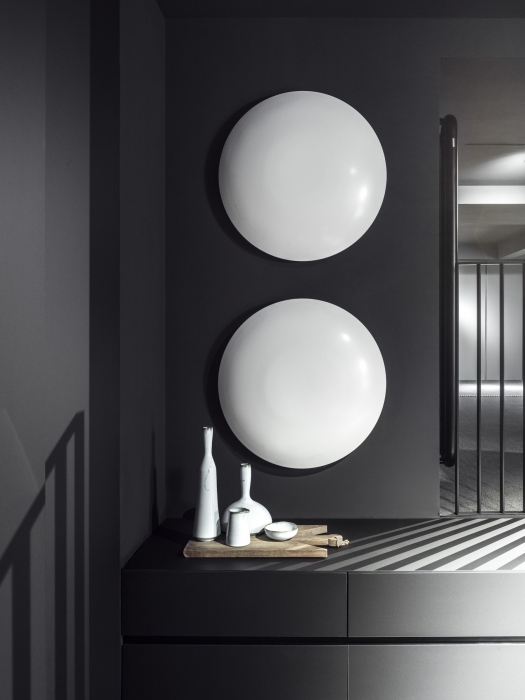 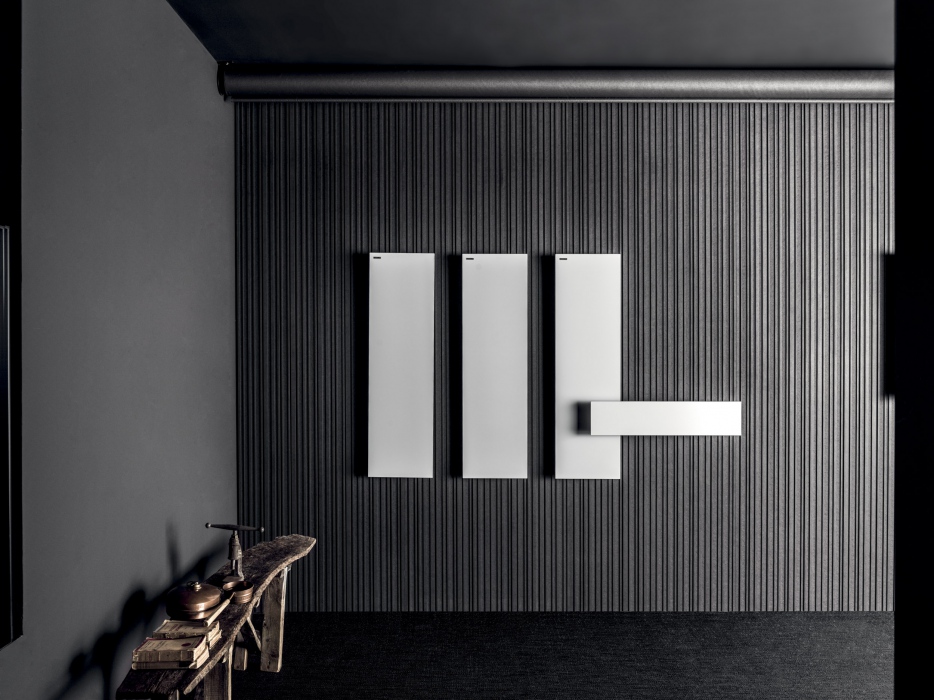 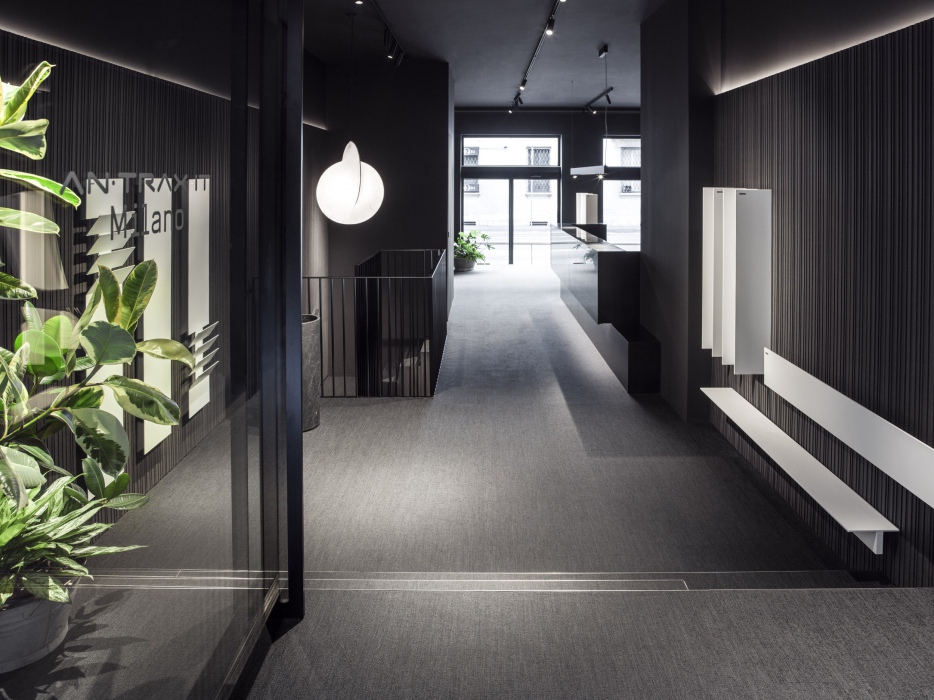 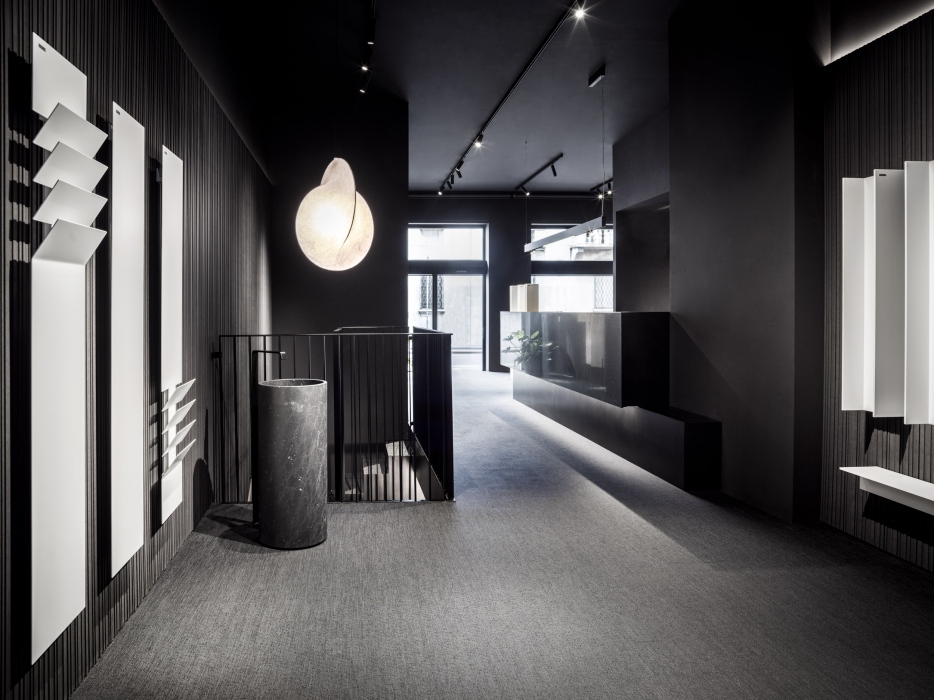 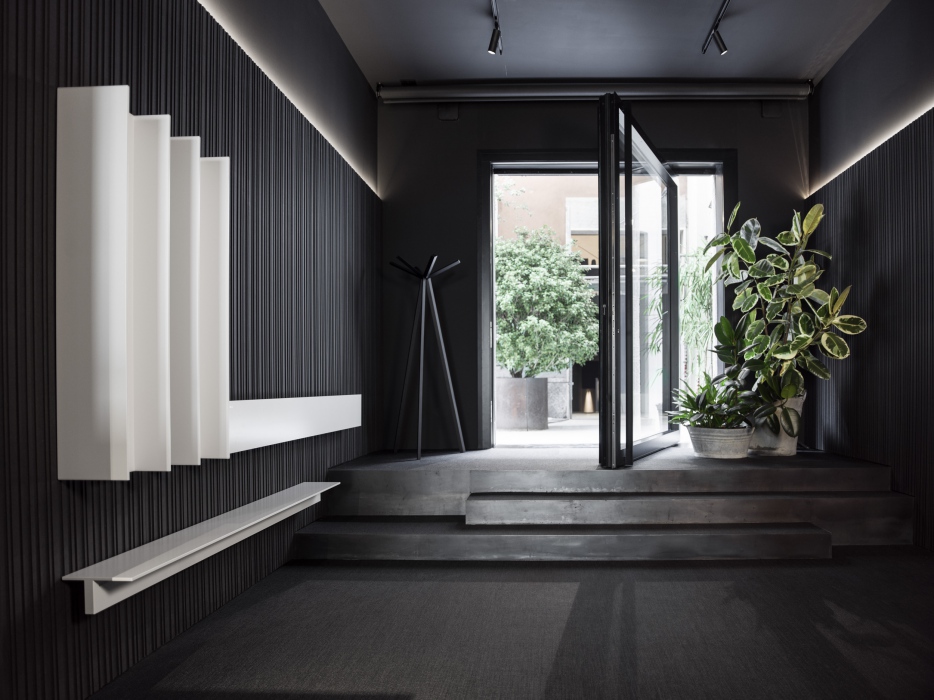 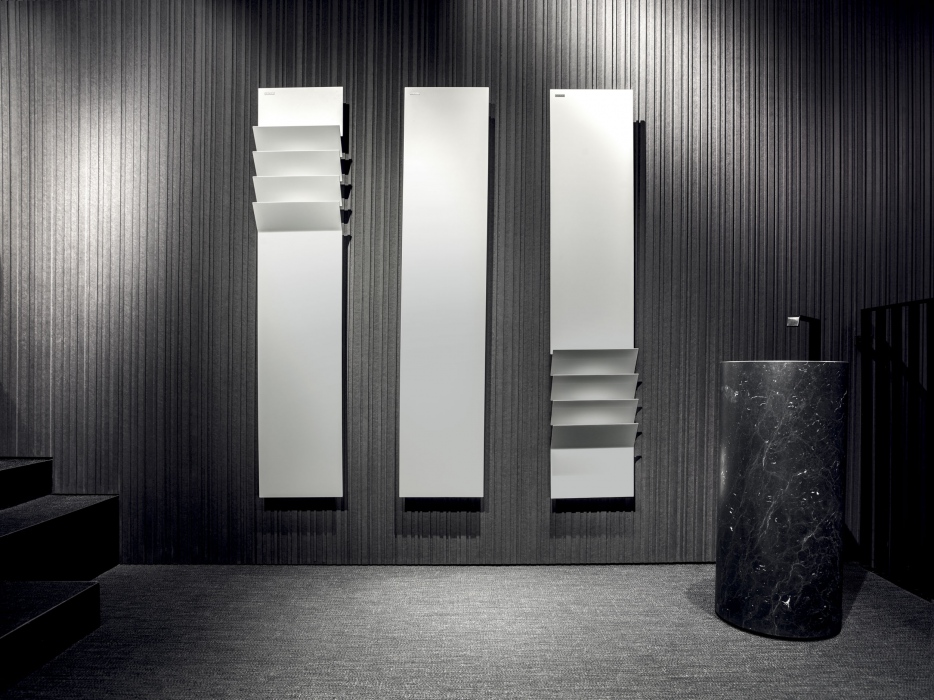 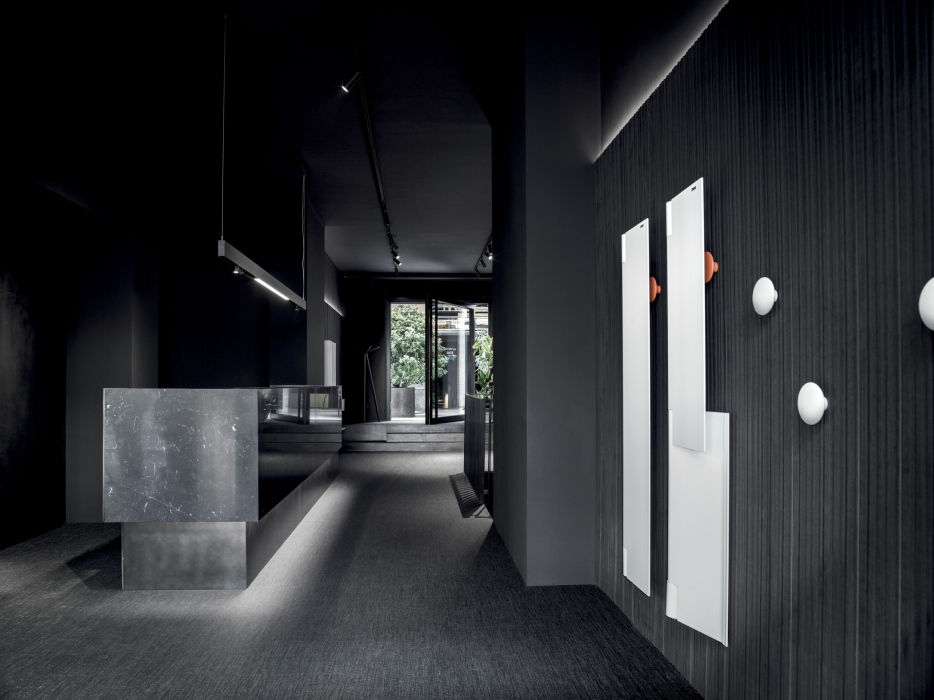 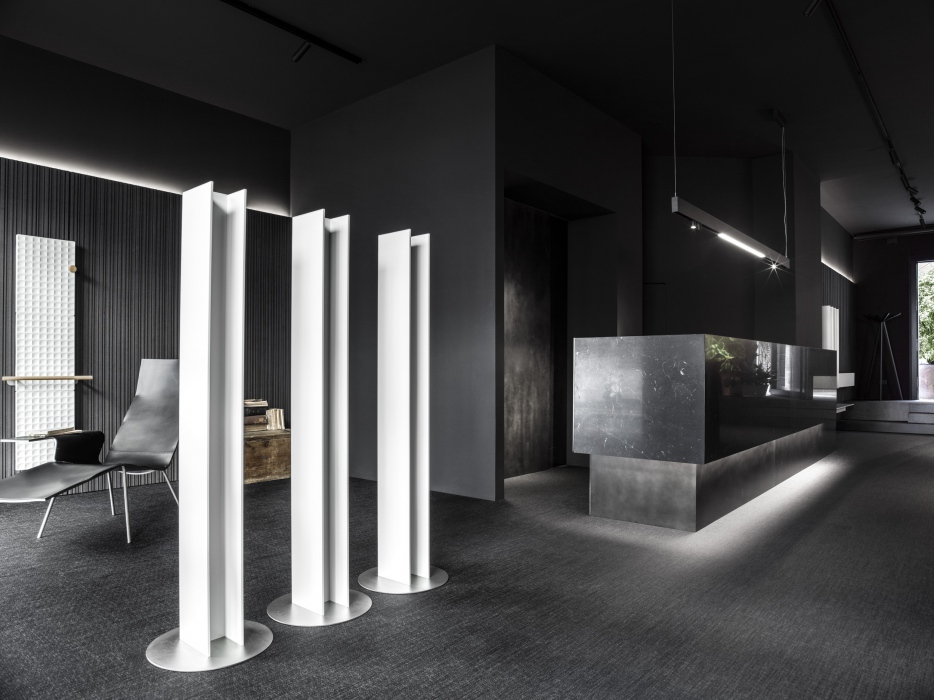 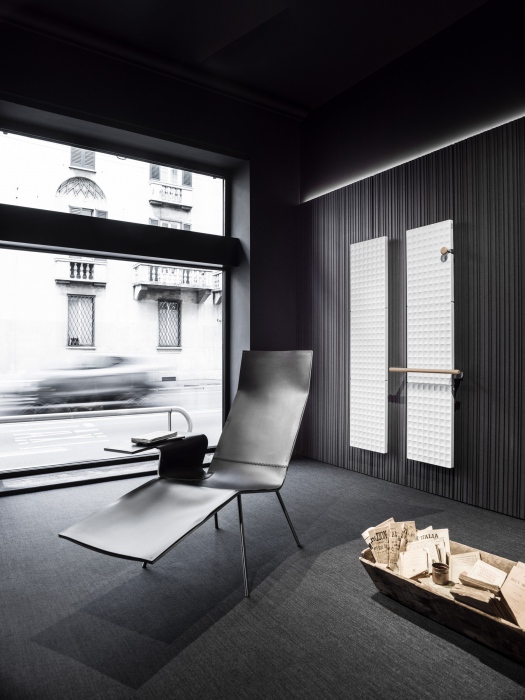 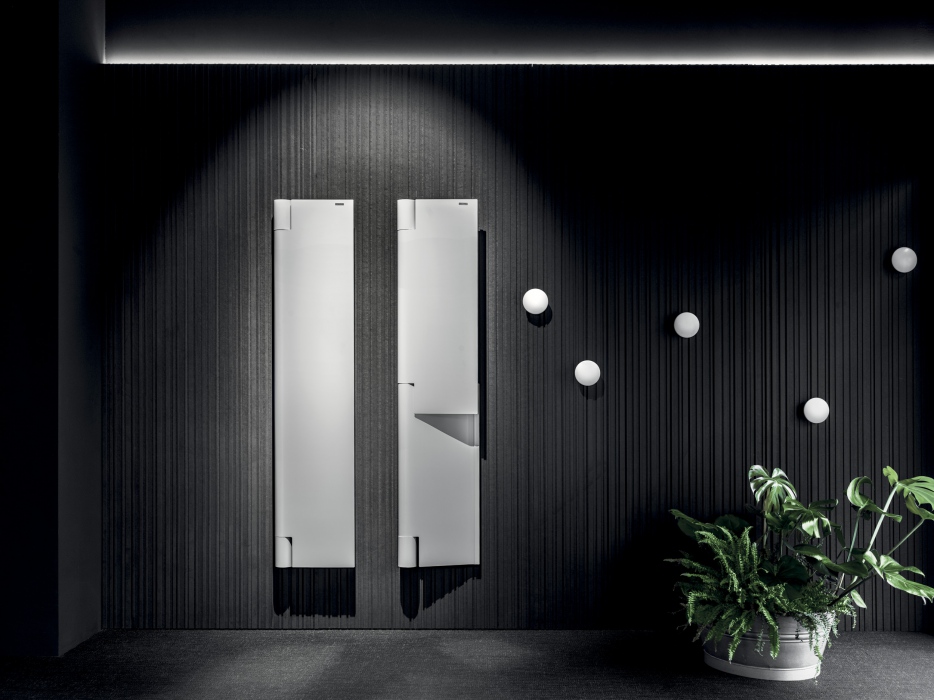 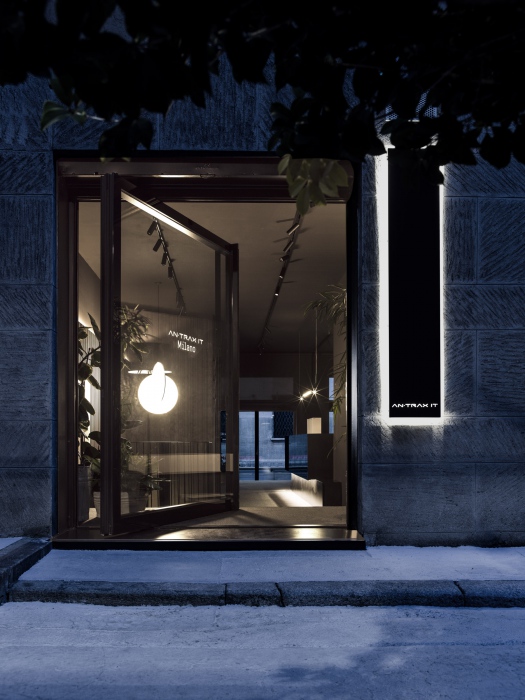 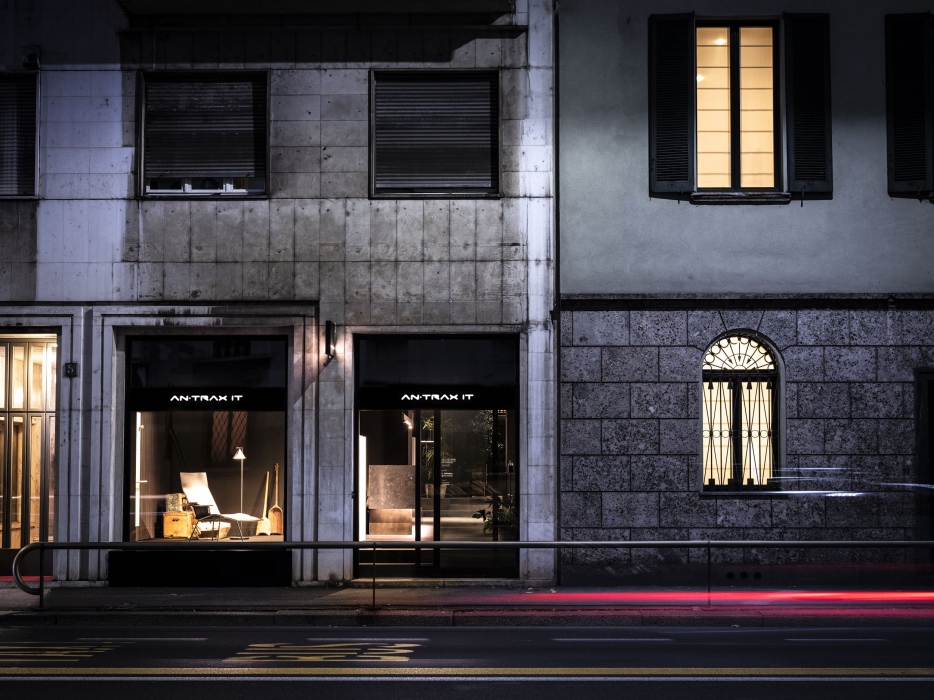 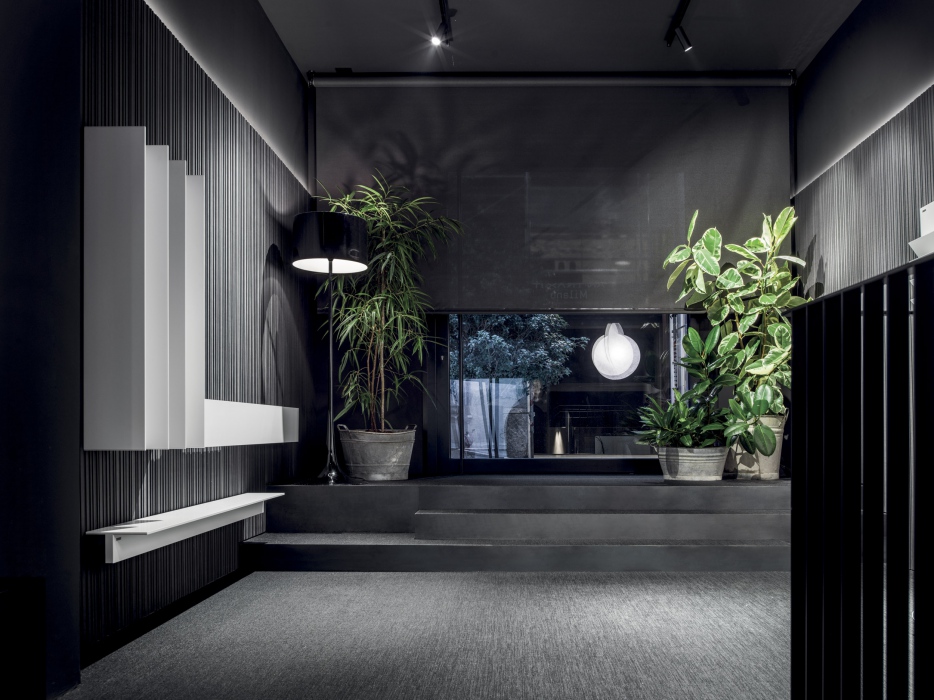 All the charm of stone-effect porcelain stoneware tiles: introducing Stile by Casalgrande Padana 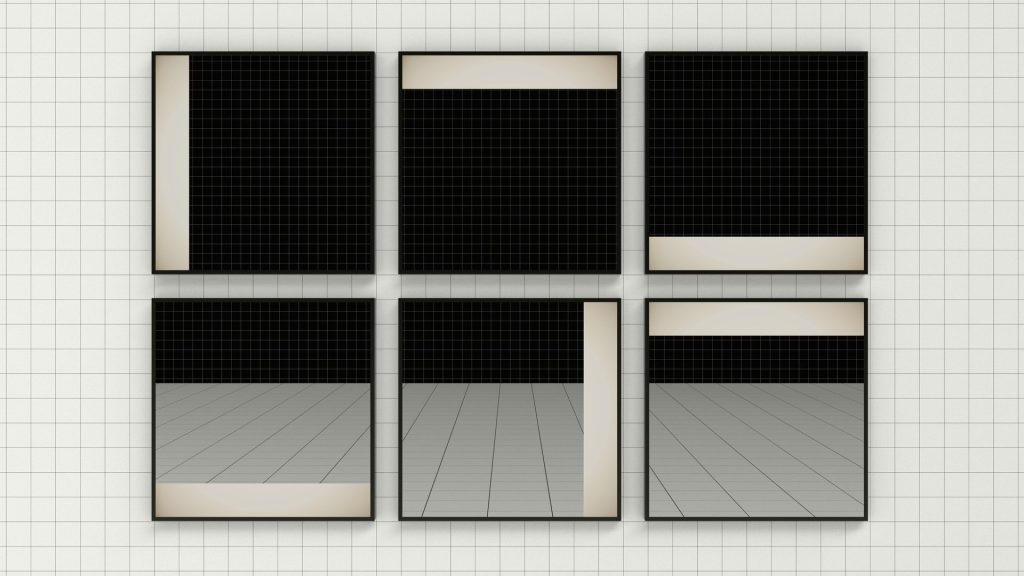