In Bressanone, the oldest city in Tyrol, the economic centre of the Isarco Valley and the third-largest city in South Tyrol, architectural firm Carlana Mezzalira Pentimalli has completed “Wunderkammer”: the Music School of Bressanone, an institution founded in 1961, and a landmark for the entire region.

The Treviso-based office first-handedly curated all the design phases of the new headquarters, which welcomes over 1000 students – from the preliminary to the executive stage, and from construction supervision to the design of the furnishings and signage. Located in the northern area of the city, close to its ancient core, the project represents the new gateway to the city, a focal point of the Priel area, hosting public facilities such as the Acquarena municipal swimming pool, and the Vertikale climbing wall.

The intervention is an integral part of a larger plan, which includes the construction of a new underground public car park on two levels to the north, with an urban crossing park on the roof. Its southern counterpart will feature a square with an additional underground level of public parking, which connects the Brenner state road – an ancient artery connecting Austria and Italy – with the municipal swimming pool and the historic city. A hub for underground vehicular flows and pedestrian paths at all levels, as well as the north face of the future square, surrounded to the east by the climbing wall and the municipal swimming pool, the School of Music guarantees the appropriate spatial alignment to complete the new urban plan and resolves the orographic dilemma and the differences in altitude.

In this way, all areas are connected and easily accessible, tessellating the square with the parking lot, the buildings of the Music School and the spaces of the Banda Musicale and Alpenverein associations, arranged within a compact volume north of the climbing wall. The result is a continuous parterre distributed on several levels. From a morphological perspective, the project approaches the historic city with its settlement principles, to respectfully reinterpret the archetype of the enclosure. The intervention, which aims to integrate into the urban fabric, is characterized by its compact and recognizable volume, within which an urban void enclosed by a fence is excavated.

Located in the western part of the entire intervention, the School is spread over three floors above ground and a portion of the basement. To mitigate the impact on the city skyline, the top floor is set back from the line of the external facades, obtaining an optical effect that dissolves the perception of the building. The elevations are also conceived as wall faces, whose treatments change in relation to the context, in order to resonate harmoniously with the surrounding buildings. The enclosure, which together with the volume of the School surrounds the large collective space of the courtyard located to the east, is configured as a two-storey volume, within which the vertical distribution elements and city services are located. In this way, the differences in elevation are resolved, ensuring visual continuity between the square and the future Priel Park, while the depth of field towards the mountains to the north and south of the area remains uninterrupted.

The project of the voids dynamically distributes the flows of users accessing the city, thanks to a strong, cross-cutting horizontal and vertical permeability with accesses arranged at +0.00 and + 3.75m. Overlooking the new Music School, the Banda Musicale and Alpenverein associations, the climbing wall and the square, the court will also serve the future parking lot, allowing a direct route to the Priel square and to the city.

Accessible to the public at all times, the courtyard houses a series of connecting devices and collective services, such as kiosks, warehouses, and vertical distribution elements.  On the ground, first and second floors, there are 29 music rooms. The stairs and connecting elements, designed as a continuous and choreographic system starting from the entrance foyer, lead through all levels of the school. The rooms and distribution elements, as well as the large central corridor from which the classrooms branch off, are illuminated by a large skylight that allows natural light to pass through the entire volume thanks to a system of double heights, and were designed as spaces of aggregation, and as waiting, study and meeting areas for students.

The monumentality of the external facades is contrasted by a strong search for familiarity in the interior, which draws on the collective memory for the historical sites of the city. The large entrance foyer and distribution spaces appear as generous and welcoming living rooms for the city, within which one finds one’s bearings thanks to openings and views characterized by upholstery of precious light grey marble. Inviting armchairs in padded fabric are strategically placed near the service areas and the filter spaces, which are entirely covered with neutral-coloured wallpaper that evoke the tapestries that adorn the rooms of the Bishop’s Palace in Bressanone. The vertical distribution elements and the furnishings integrated into the building, made of dark-stained oak wood, recall the carpentry works of the buildings in the historic centre of the city. The abundant natural light, vertical or zenith depending on the situation, filters through curled curtains, with sound-absorbing characteristics, in soft pastel colours.

Made on a very limited budget, the project does not sacrifice formal experimentation. With carefully selected elements, authentic materials and a simple construction system, the studio has created a product of great technical and aesthetic quality, which respects the tradition and materials of the area. Entirely built in exposed reinforced concrete, the building, devoid of coatings, presents a surprising correspondence between structure and architecture. By adding red porphyry aggregates and pigments (red at 3% and black at 2.5%) to the concrete, the complex achieves a colour and texture that blends superbly with the customs and traditional materials. 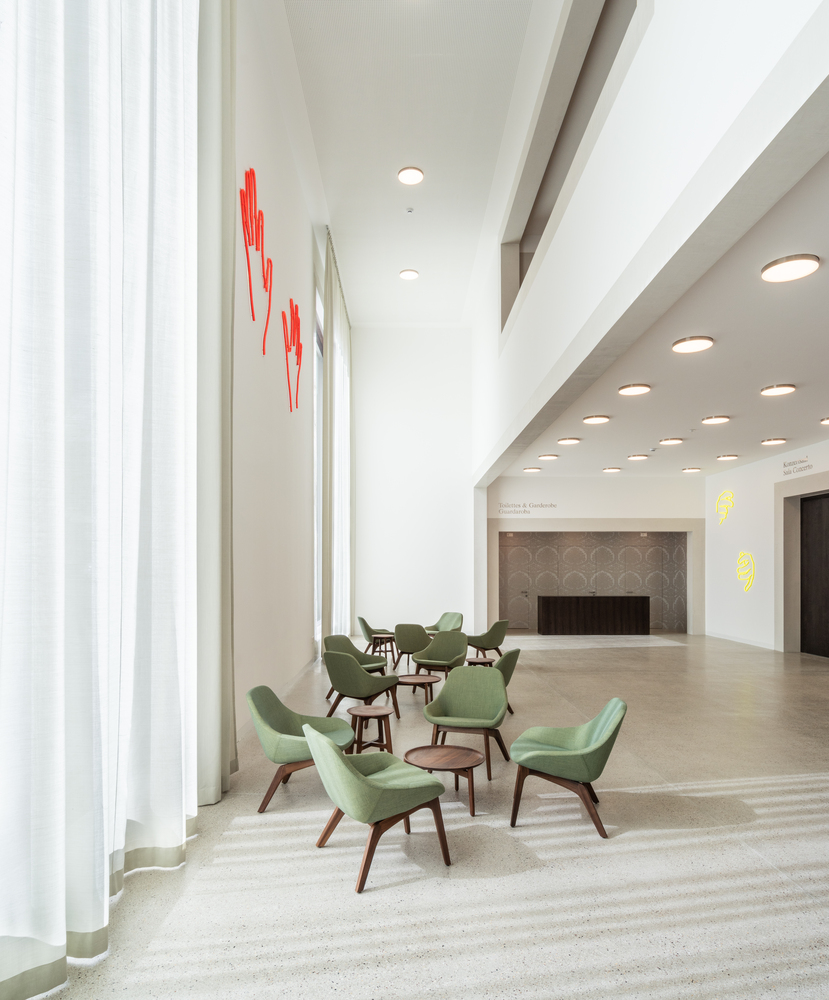 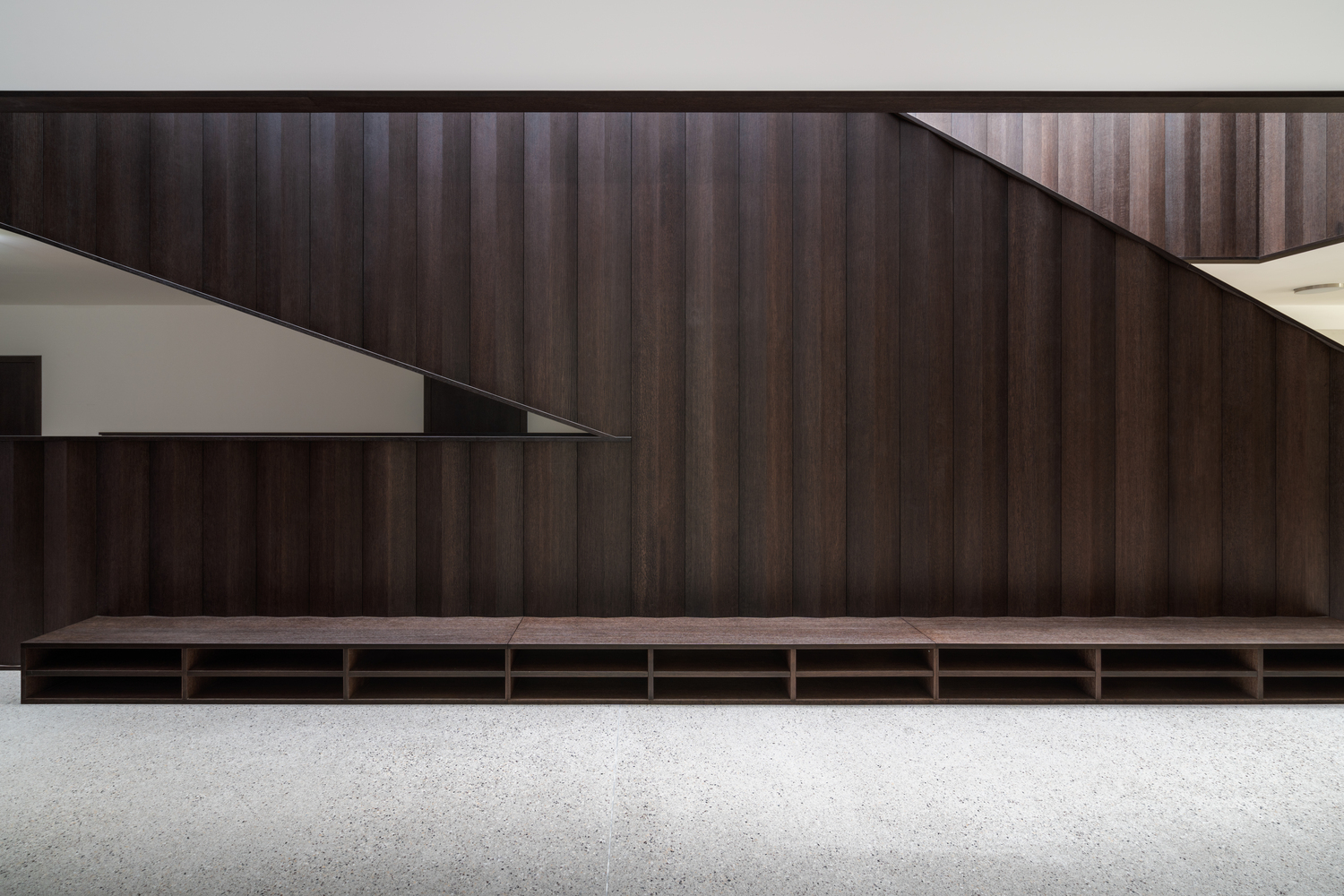 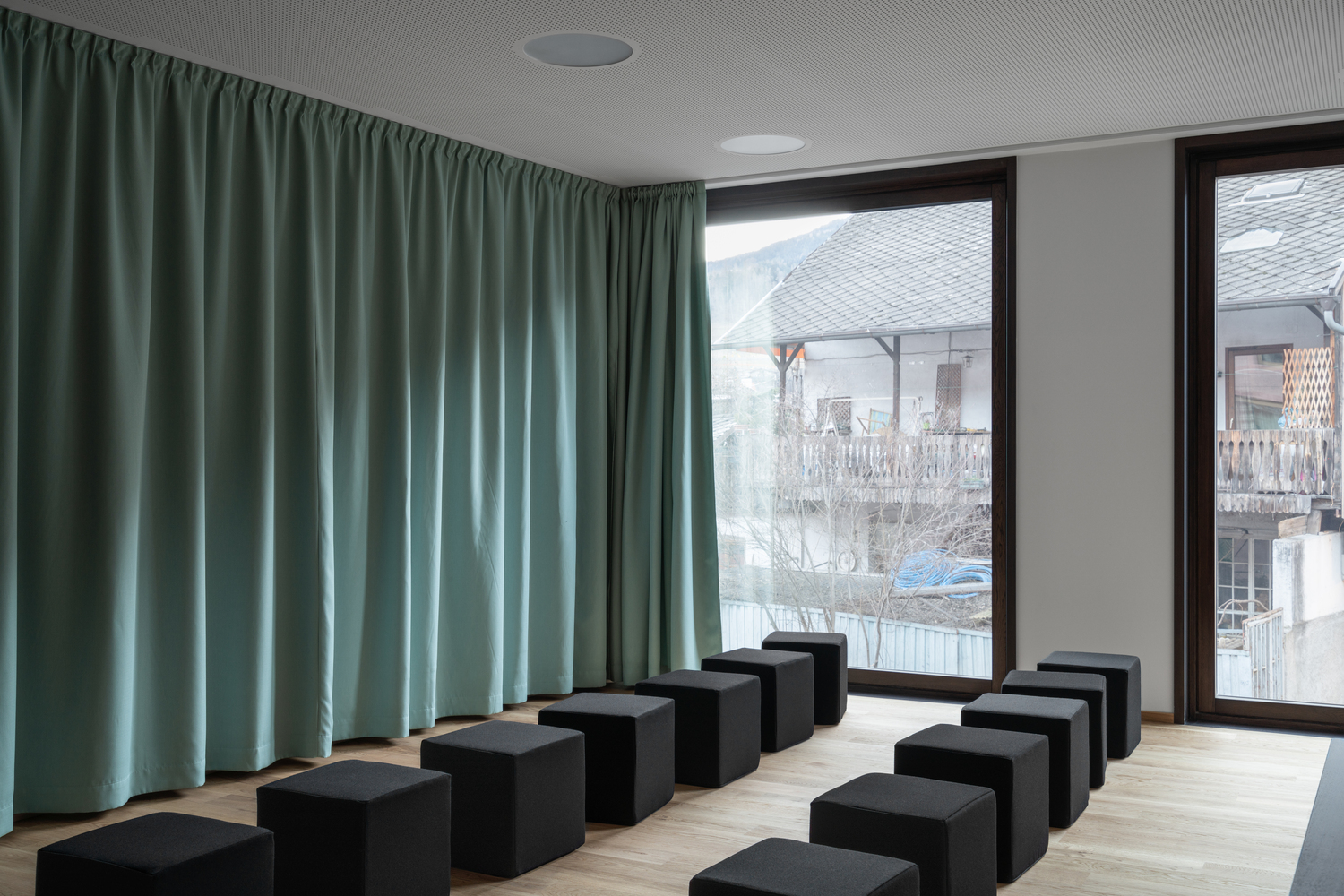 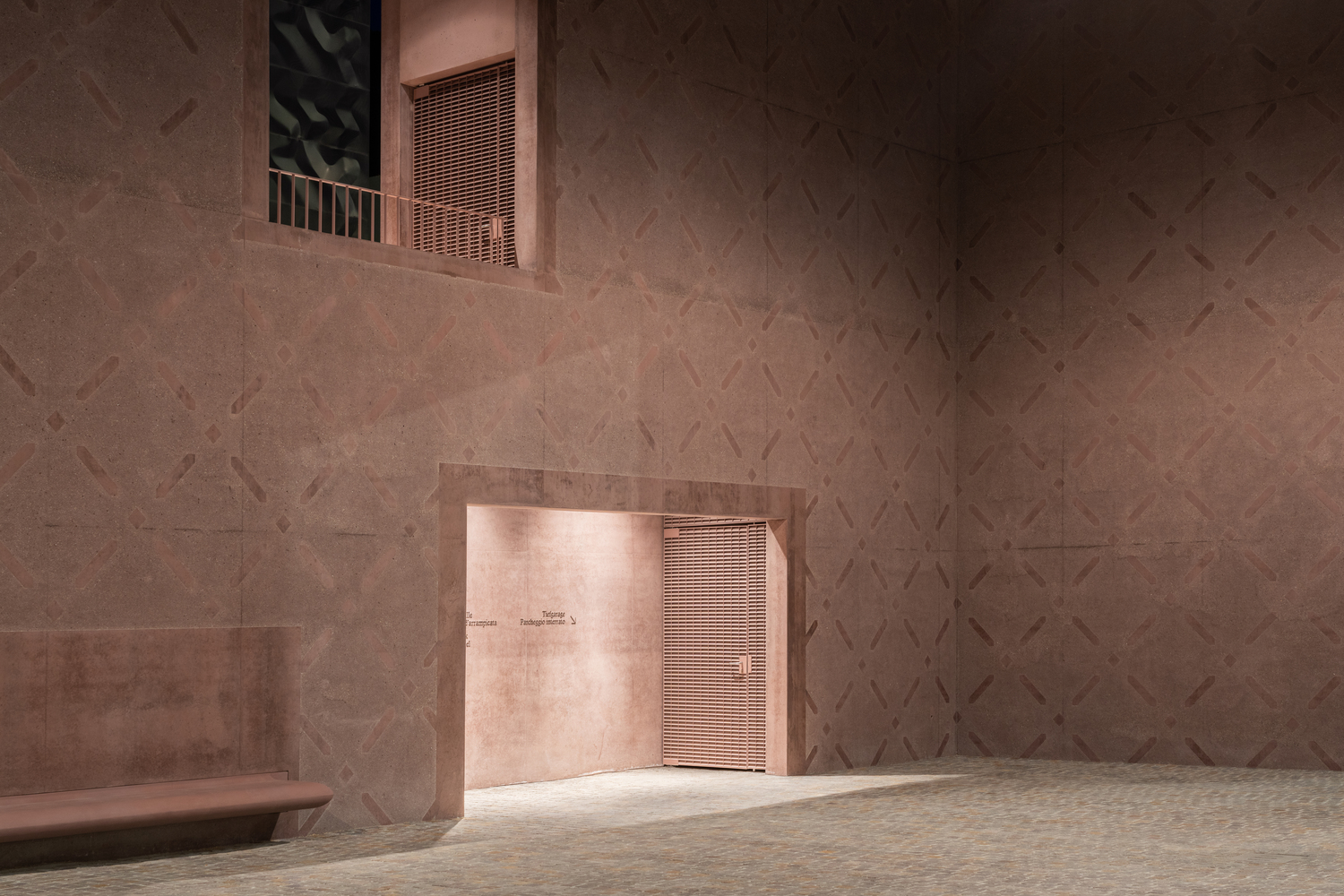 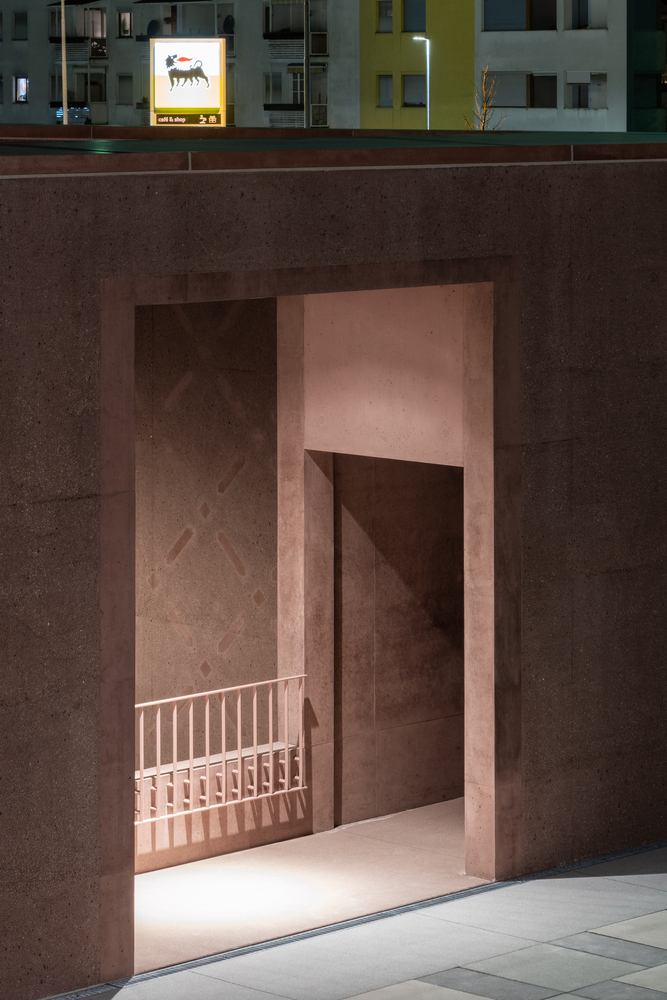 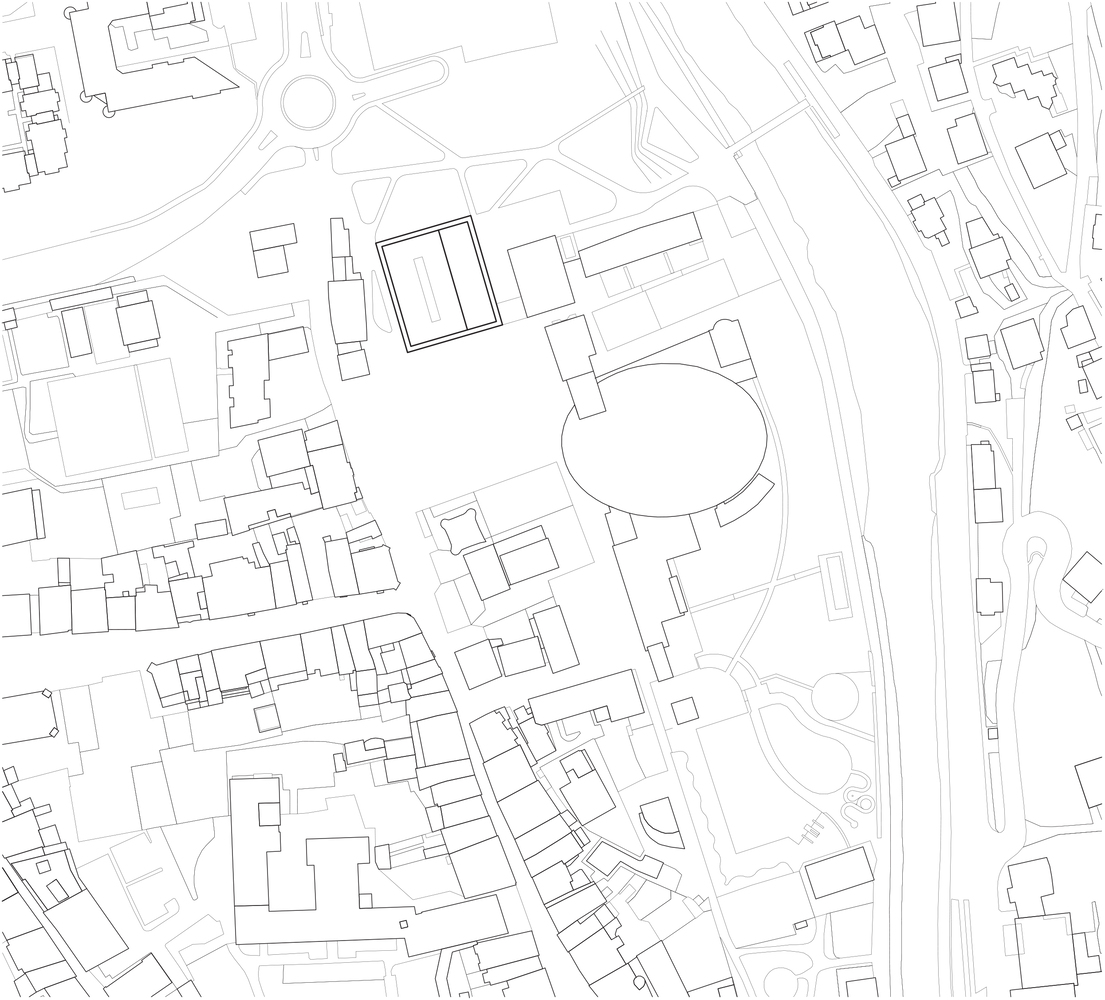 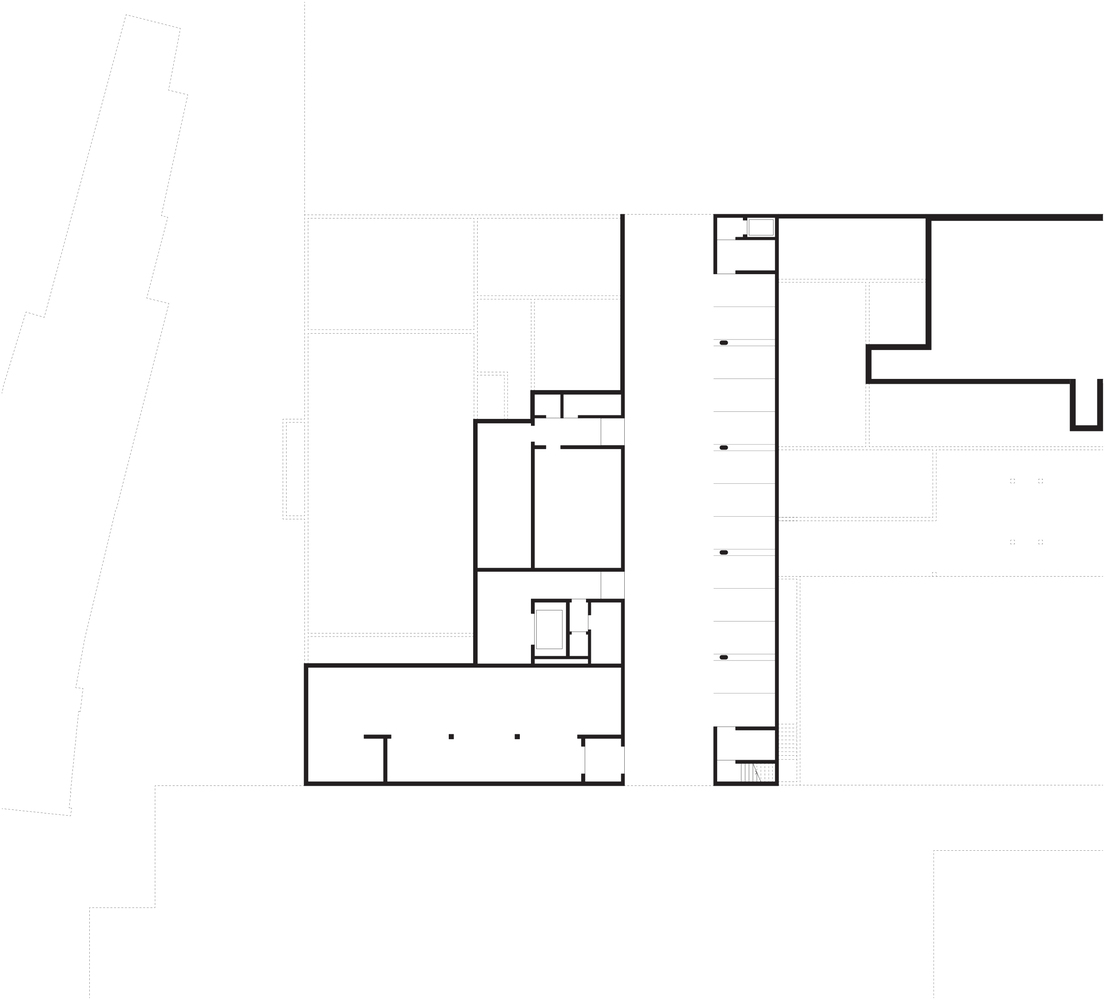 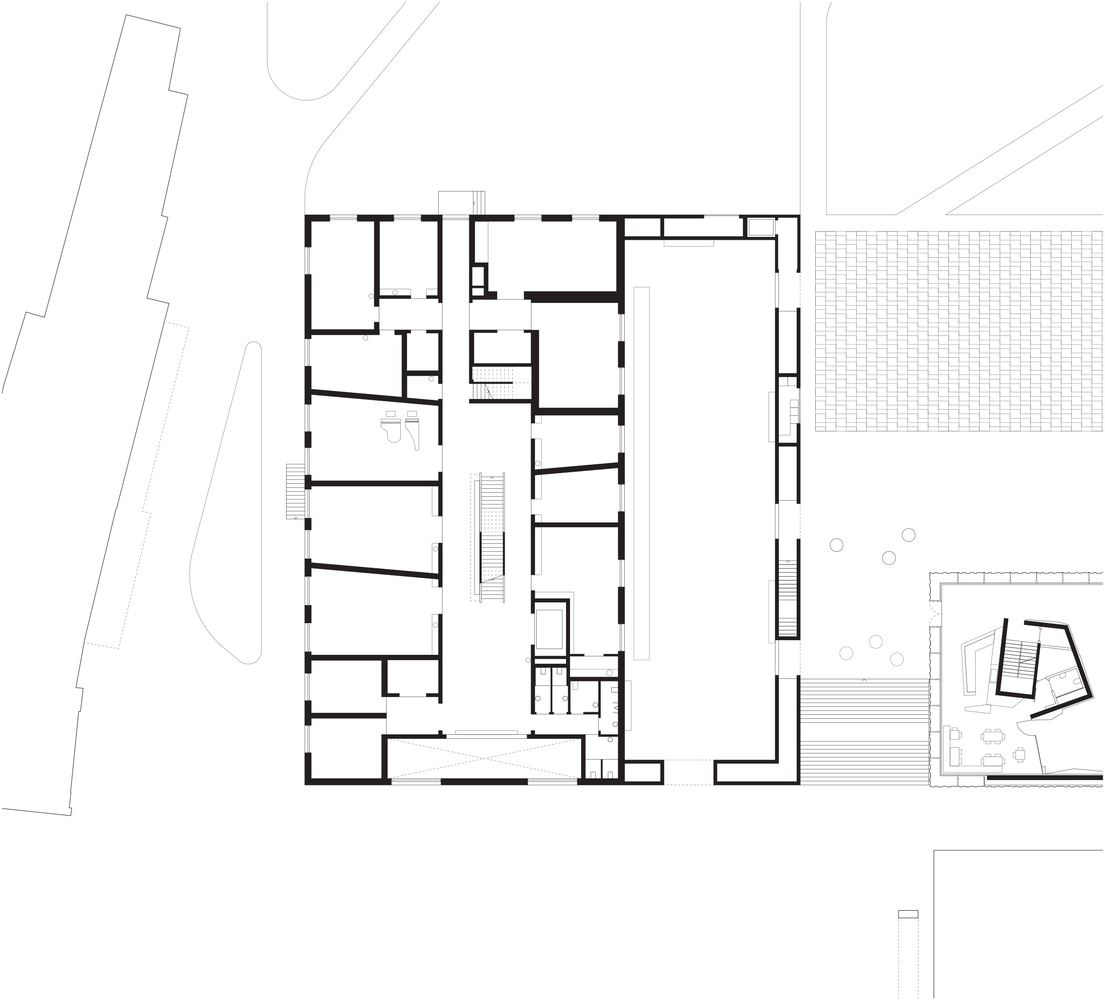 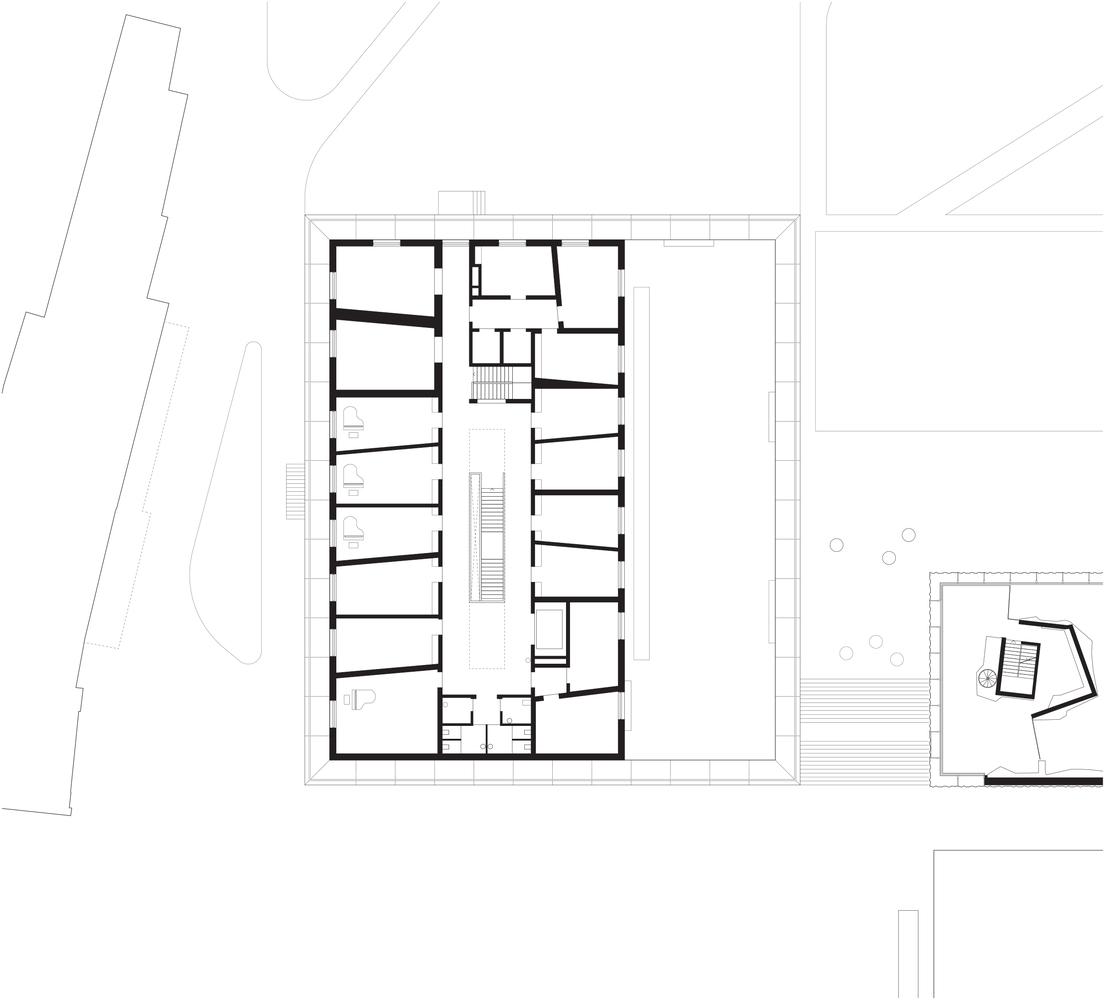 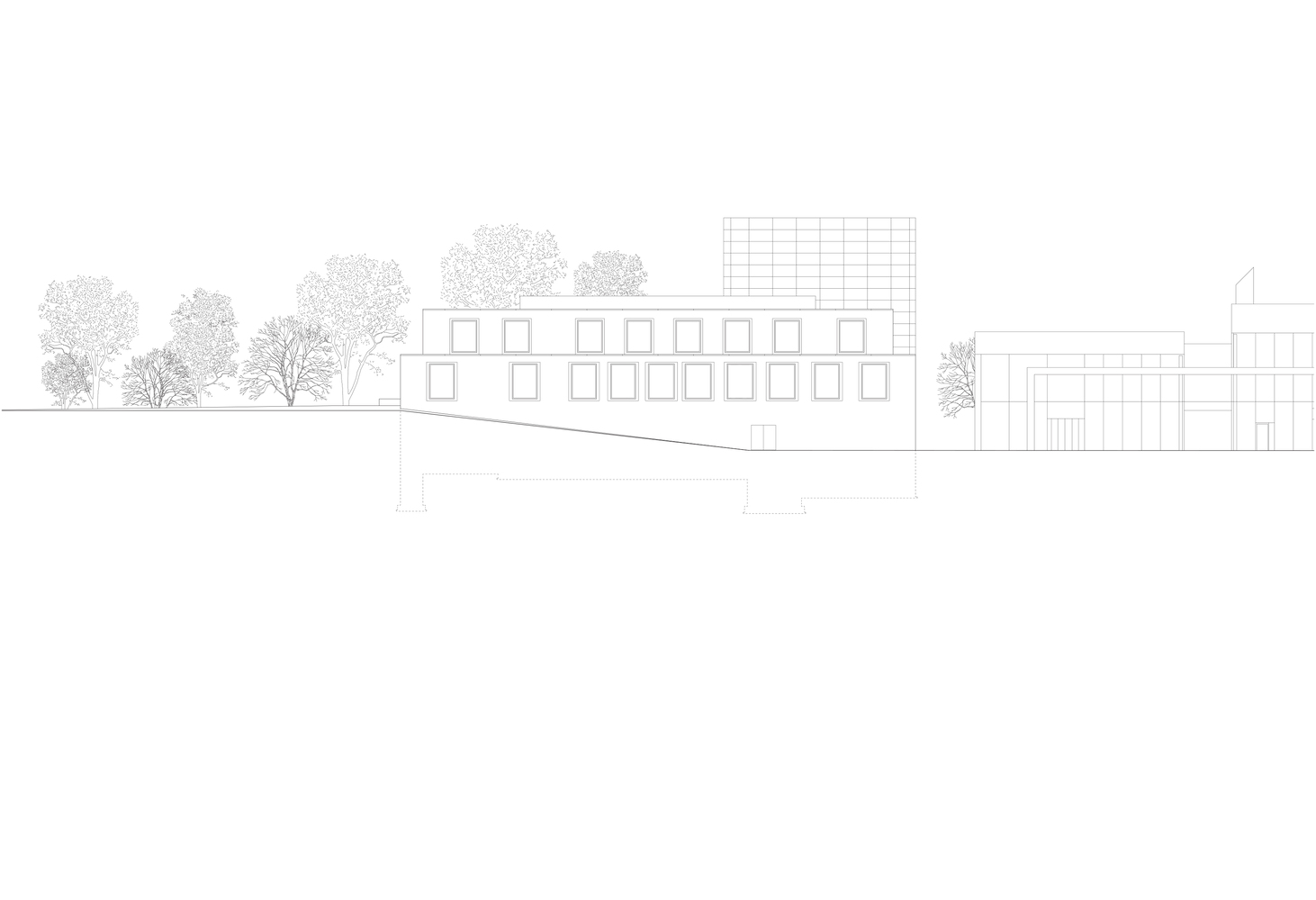 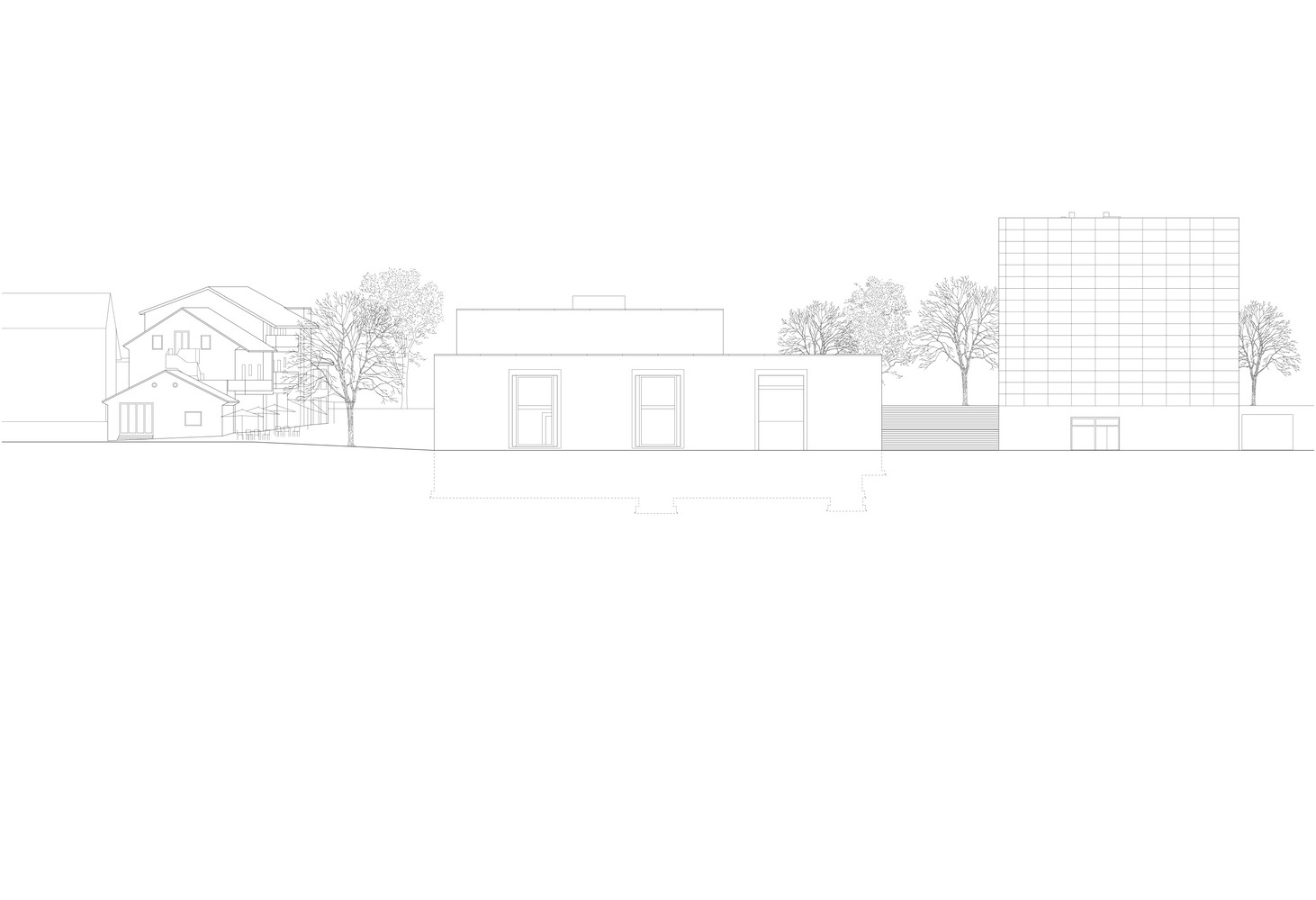 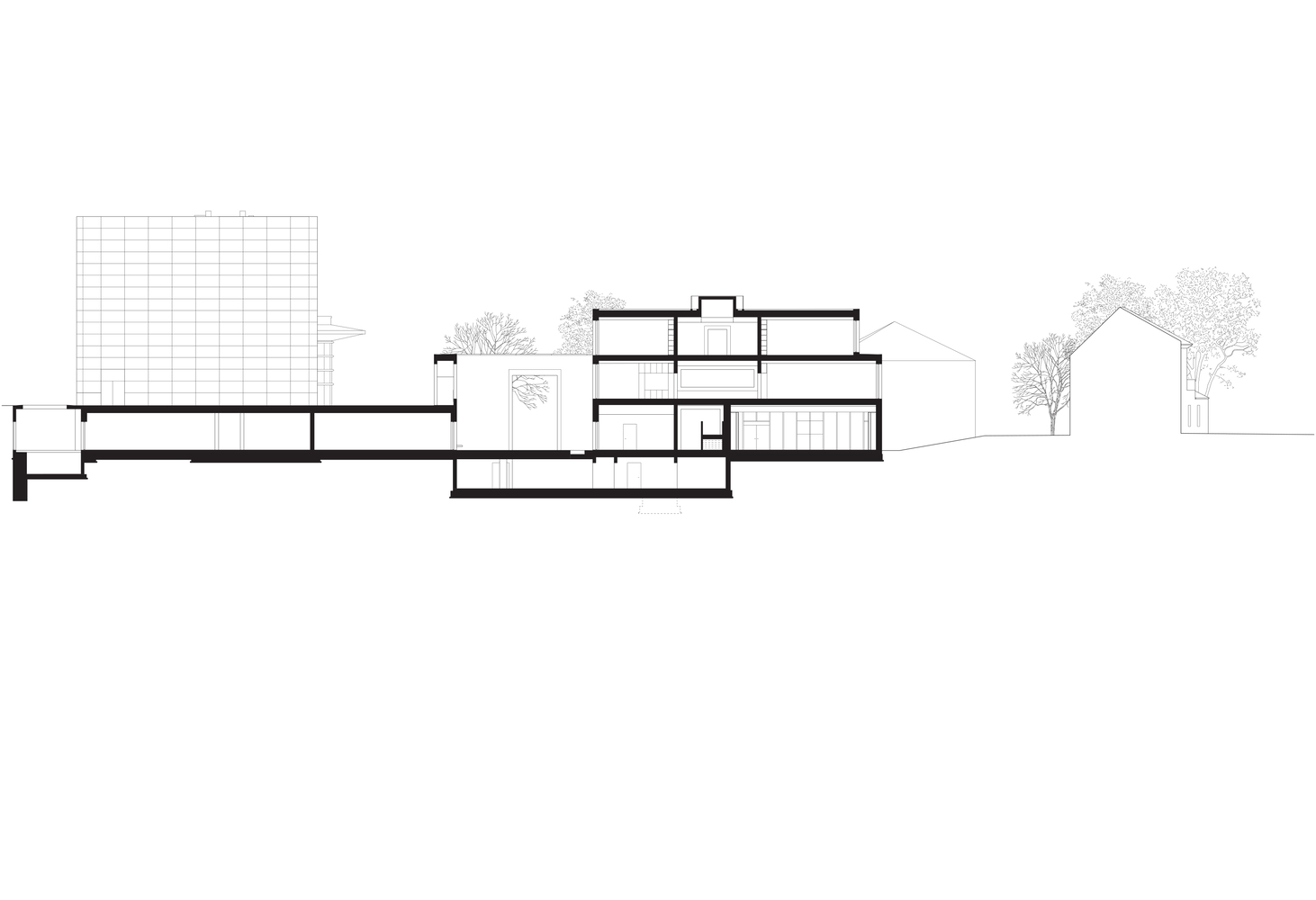 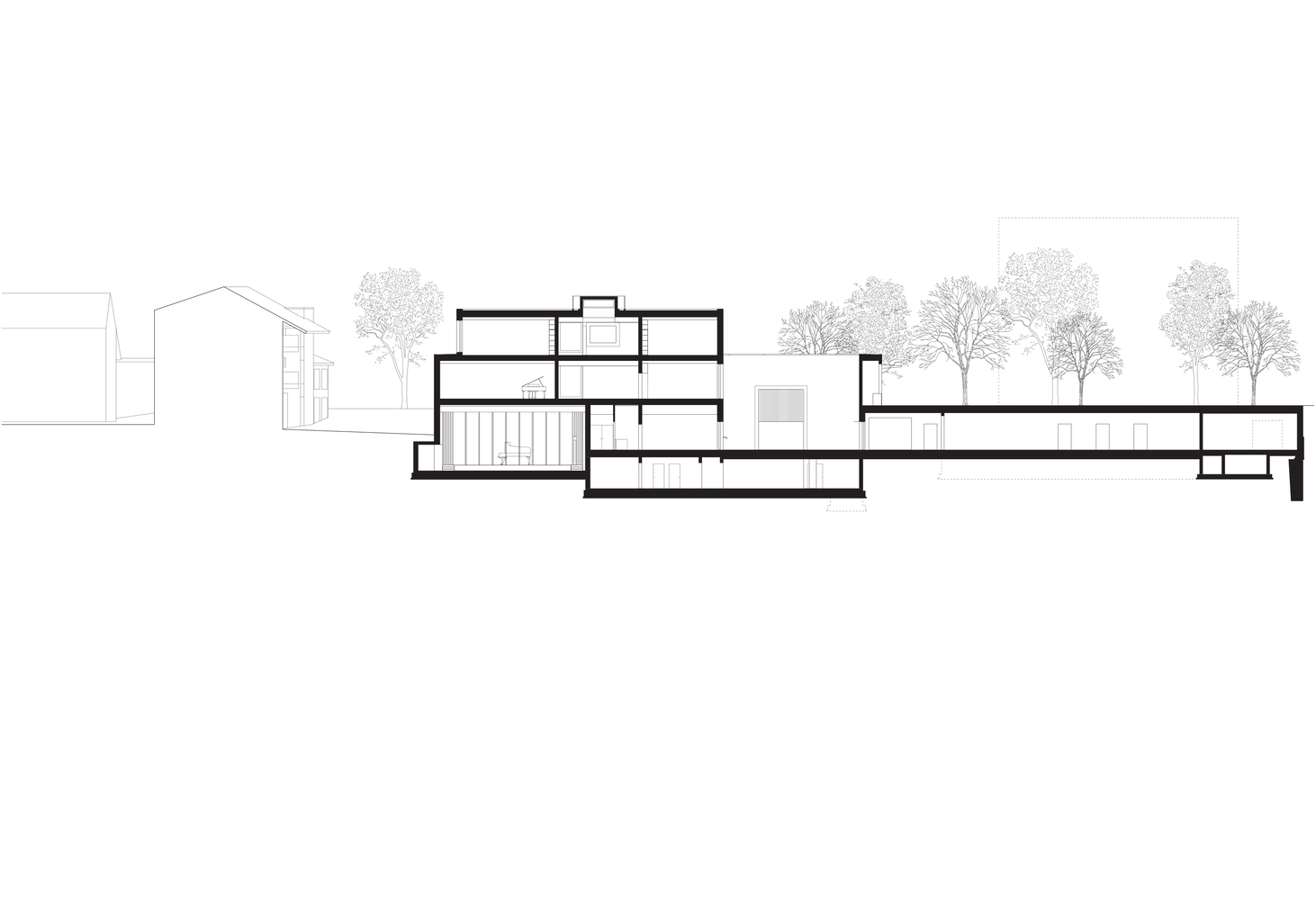 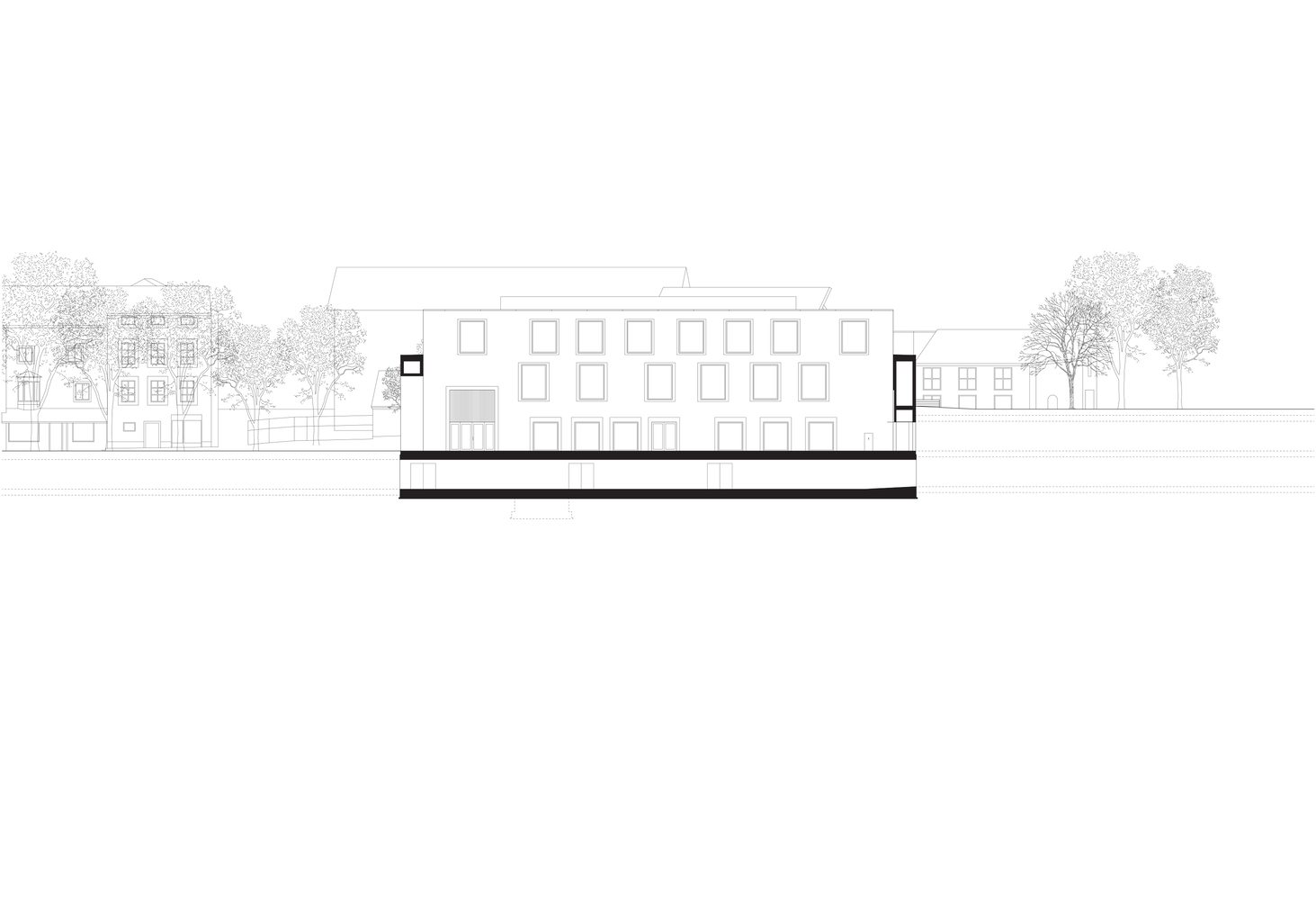 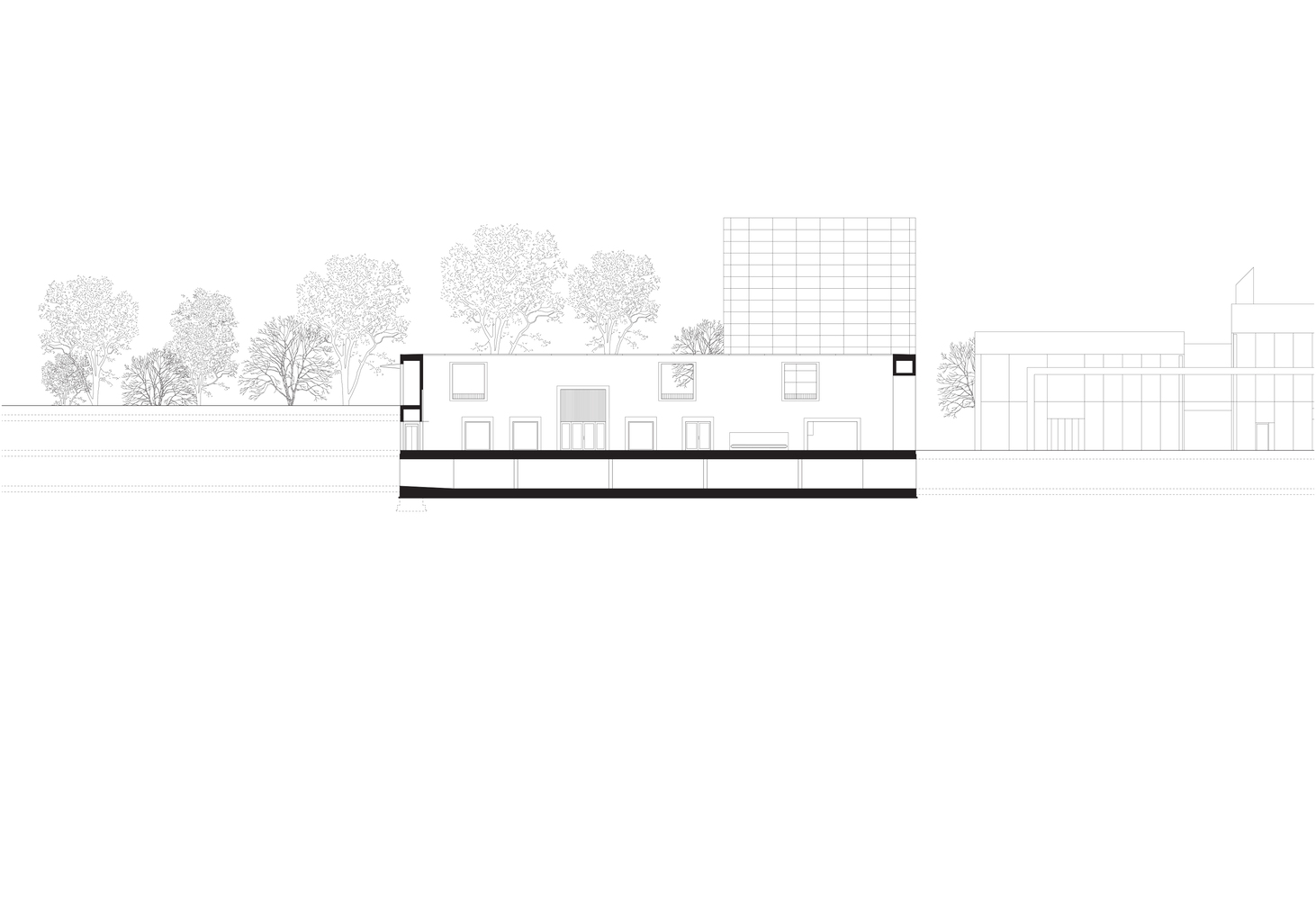 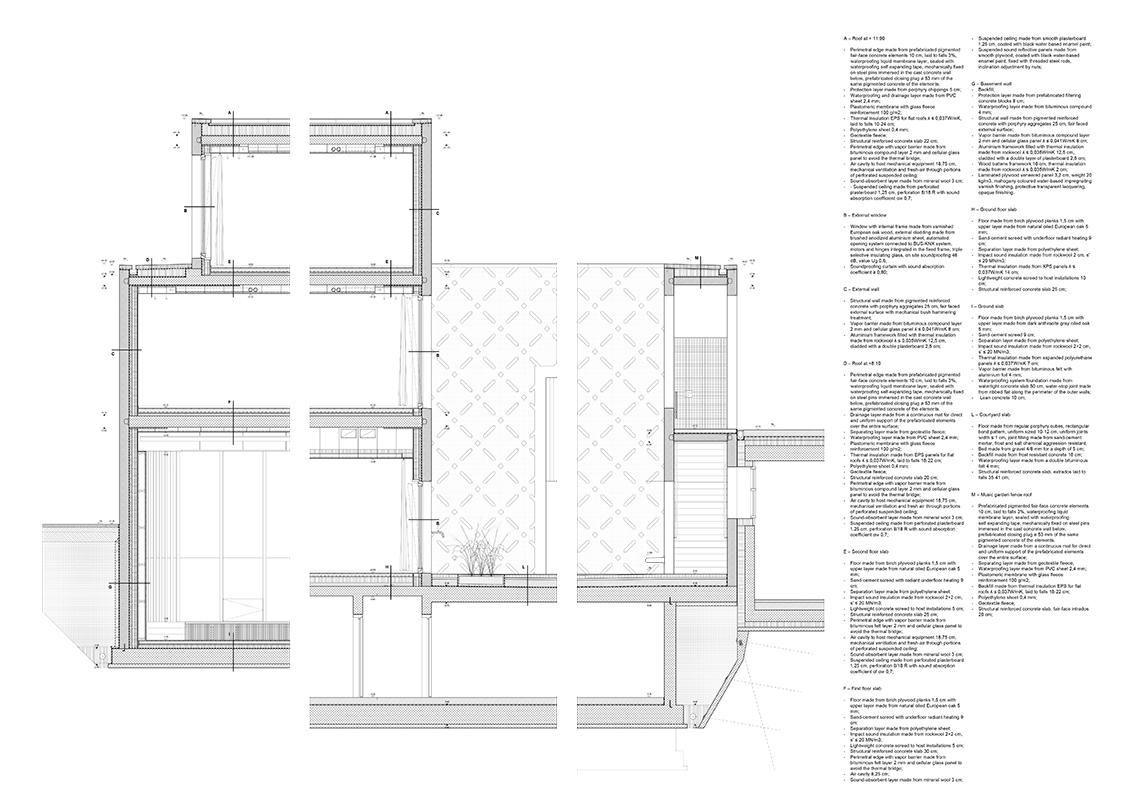 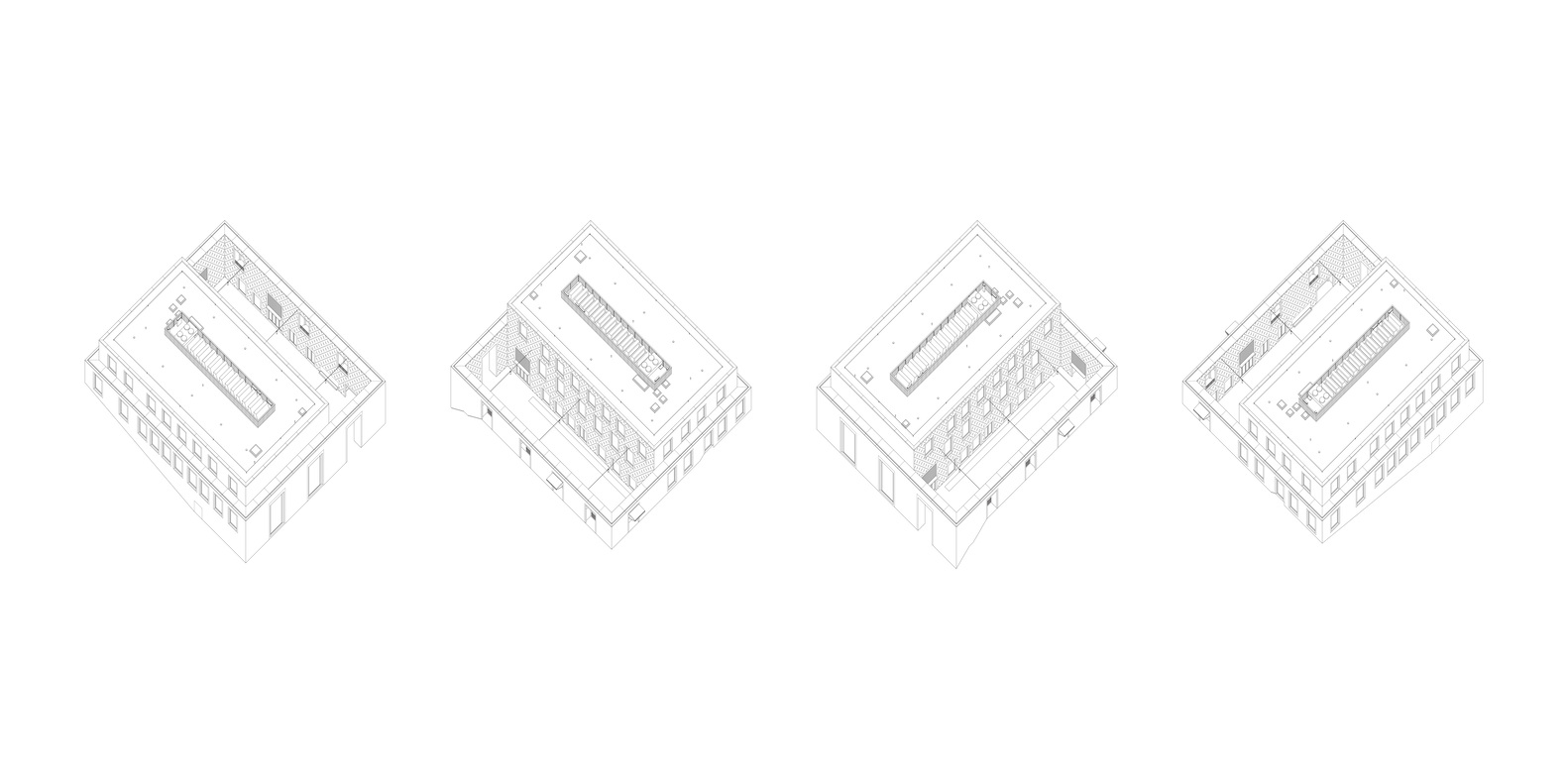