The discipline of the existing, after Sala Beckett / Flores y Prats for IQD

Sala Beckett is a combination of two stories with two very different origins that come together to build a new project, to which each one contributes its best. On the one hand, the former worker’s Cooperative Pau i Justícia in Poblenou, an abandoned building which, due to its advanced state of ruin and presence in the memory of the neighbours who lived around it, had an enormously poetic charge. On the other hand, the Sala Beckett, a drama centre with a long history in the city, high regard and support within the theatre scene, and which was set to change its headquarters and move into this building in another part of the city. Our studio was introduced into this story at the moment of the competition to rehabilitate the building and to adapt it for use as the new Sala Beckett, a process from which we were able to work towards what we believe a project of adaptive reuse should be.

Observing over months the state in which we found the Cooperative in a direct and intense way had a great influence on our response to a program that, in principle, had nothing to do with the previous use of the building, but at the same time shared so many affinities that made it fit perfectly, second hand, into the existing structure. The former Cooperative was a building composed of very large rooms combined with small, compact pocket spaces that suddenly, upon the opening of a small door, would remove us from one place and switch us to another hidden circuit of rooms that we never imagined could exist. An ideal place for theatre.

It was not only the physical presence of the Cooperative that impressed us and influenced our reactions and drawings. Not only the visible, but also the invisible, that lived among those ruins, that led us to draw and try to capture what was in front of us in order to keep it inside the new project. All the social and cultural activities that had taken place inside the building until recently: parties, celebrations, dances and performances, all the ghosts of the people who had participated and activated those spaces, were still present in the great halls.

The competition raised a first question that, in our opinion, was key to all the subsequent development of the project. Even when the Cooperative had been so active in the history of this neighbourhood, in official terms the building was not listed, it could be demolished and a new one could be built in its place. Therefore, at the time of the competition the decision to maintain the building or not was a very important one, especially because in its advanced state of ruin it needed to become a drama centre with the relevant technical specifications –acoustic, environmental and structural– in accordance with a contemporary theatre. So, deciding whether to rely on that building to be able to advance with the project, in the fragile condition in which we found it, was a key decision, it was in fact the starting point of the project.

What appeared in front of us however was emotionally too strong not to be used as a basis for the new theatre. So, we thought we could not demolish it but instead we had to recover it and accept the ruin as the starting point. We wanted to recover everything, the physical but also the emotional heritage. All the stories that still floated in those spaces, evoking memories about the people who had spent their time there, had to be part of the future Sala Beckett. Therefore, our efforts were focused on keeping these memories inside the building, forming the basis of the new project.

Before moving into Poblenou, Sala Beckett had been operating for years in a much smaller space in the neighbourhood of Gràcia in Barcelona, carrying out amazing theatrical work and becoming a reference for national and international playwrights. Therefore, moving Sala Beckett from Gràcia to Poblenou was for us another of the great issues of the project. How to get them out of where they were and take them to a new place without causing them disruption? How to make them change building and even neighbourhood without losing their aura, their magic during this transfer? We thought that something that would help us was maintaining the building’s atmosphere of being inhabited, in use, occupied in advance. And to achieve this we had to preserve the ghosts of the former Cooperative inside the building, making sure that they would kindly welcome the new occupants and their stories.

But the ghosts of the Cooperative were everywhere: in the incomplete finishing of the walls, in the pieces of furniture scattered everywhere, in the tiles on the walls of the old kitchen, in the floor tiles with different designs for each room, in the doors and windows… And so, at the beginning, in a more intuitive rather than reasoned manner, we began to draw everything we saw as a way of knowing it and sorting it out, so that it could become part of the future of the project: we collected all the elements that had survived the destruction of time, and we drew them intensively, getting to know them one by one and thoroughly, discovering in this process that each element had a personal character, each one was different -its measurements, its geometry, its construction…- making evident the manual and handmade condition of their manufacture. However, behind the decision to make an inventory there was also a concern to safeguard very typical materials of heritage in the city of Barcelona, which even today, when a building is renovated, are brought down to the street and piled up as rubbish in large containers in front of the construction sites. The inventory would be a way to make the builder understand the importance that all those elements had for the future project.

But before we arrived, time had acted with violence upon the physical structure of this construction, and this also influenced our way of drawing. When we entered, the building was open to the elements, the outside was inside, and the air and the rain were where we did not expect to find them. It was possible to see the sky and the sun entering, a feeling of vulnerability was invading everything. And yet those large gaps that we found inside the old structure generated new and surprising conditions of scale, allowing views that were previously not possible through a succession of floors from ground to sky, all at one time, qualities that forced us to stay and work directly with them, without separating ourselves from the place. At the same time, it was precisely the fragmentary character in which some spaces and construction elements were found, what allowed us to work with freedom with something that appeared as if it was under construction, a starting point for our drawings. Here was an opportunity that the Cooperative had opened up for us, even more so because the building was not listed.

Our main interest at that time was making the most of what we inherited, trying not to divide its qualities. The Cooperative was a place of very generous dimensions and we were interested in maintaining those large spaces, difficult to find in other parts of the city of Barcelona. So we used the strength of that place as an inertia that would allow us not to start from scratch or from our own inventions, but triggered by ruin standing before us, so that it was the ruin what would make us react and move forward. Its burden of history and material weight, the physical and emotional reality that it contained was the one that provided resistance to the attacks of the project, and made us draw with it and against it until reaching a balance where the addition is not new but a modification of what we had in front of us. Drawing it as if it were ours, drawing on top of it, making it part of the project and then continuing to draw to transform it from within, from its own constructive, geometric, programmatic and emotional logic. Now it is difficult to distinguish what is new and what was there previously. It is a new generation of a previous building.

Taking advantage of the qualities of the precarious building we had, we left it as open or more than how we had found it. A huge empty volume is introduced to accommodate the vestibule, full of light and new colours, slipped into the old Cooperative and gravitating all towards it, all driven from that centre, turning the inherited place into a new place with more energy than the previous one. The students enter that vestibule in the morning and the light that arrives with force from above welcomes them. Everything, space and students at the same time, revolves around that central void that has the scale of another time, of the moment that the building was a ruin. And in the end, it’s like having the ruin there once again: a place in the open, on the boundary between interior and exterior, where you can see through spaces that connect lines and profiles of floors and walls that originally belonged to different places. The best part of what the Cooperative had and kept for us has been kept in the new Sala Beckett. 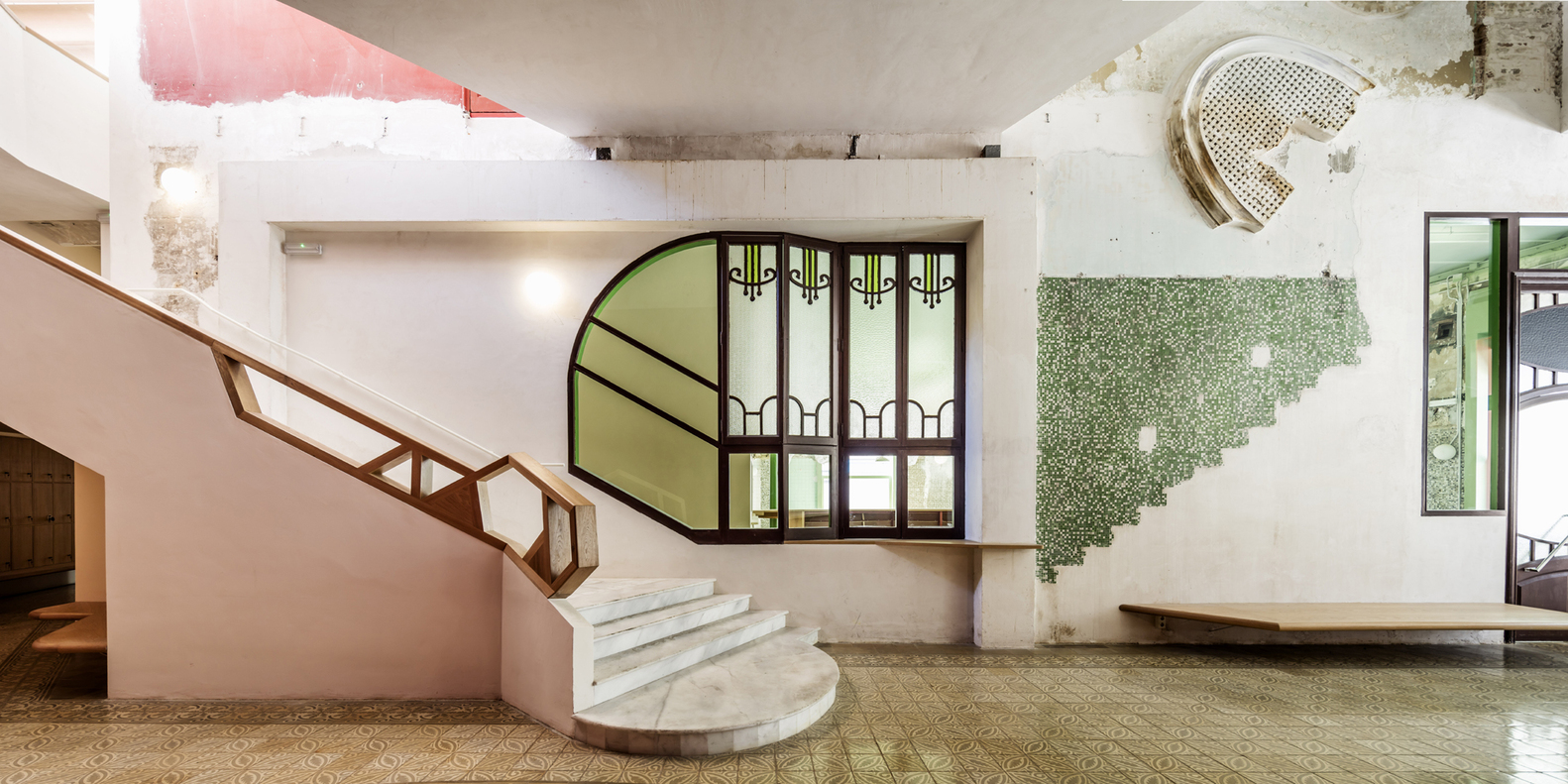 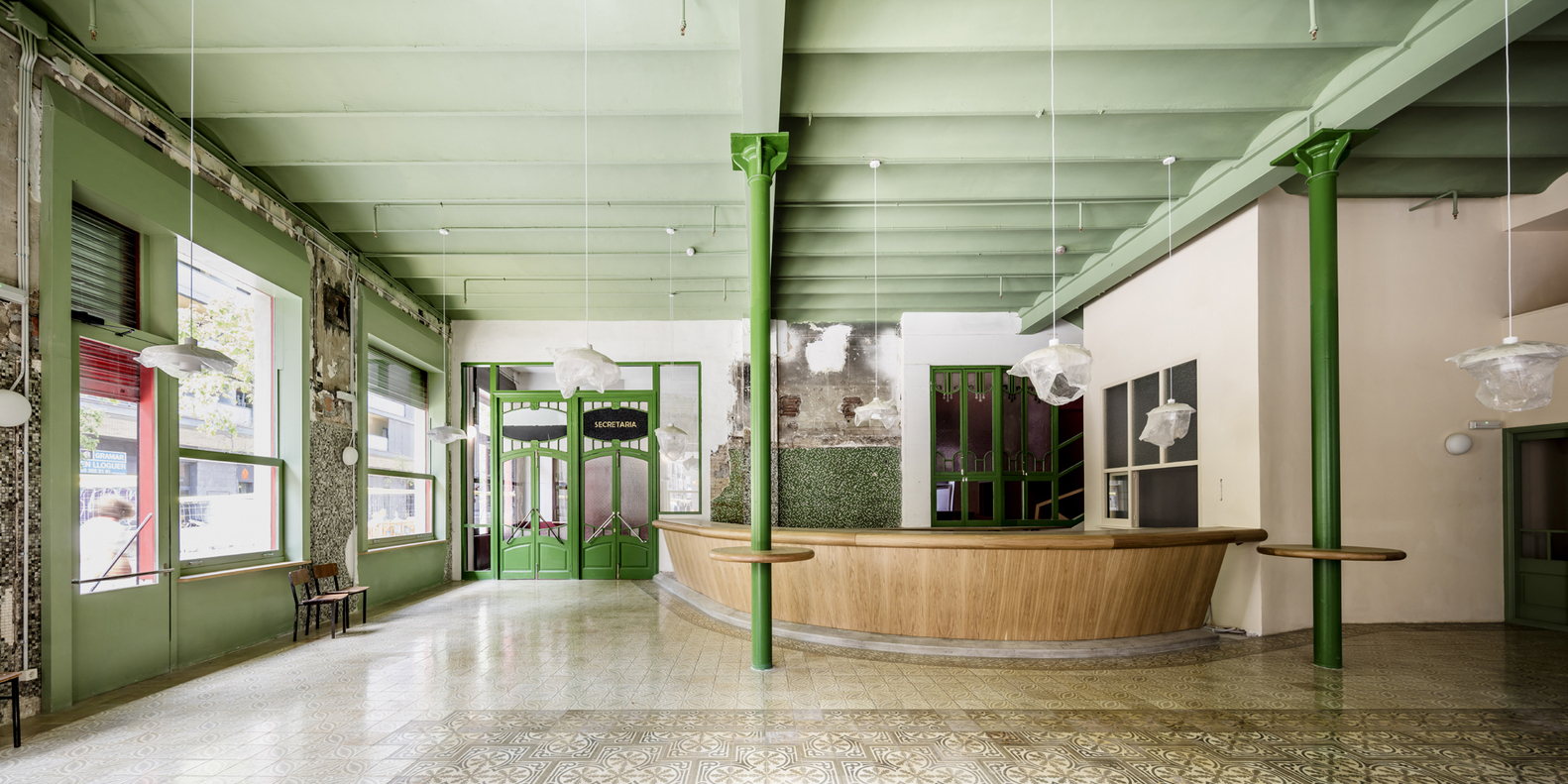 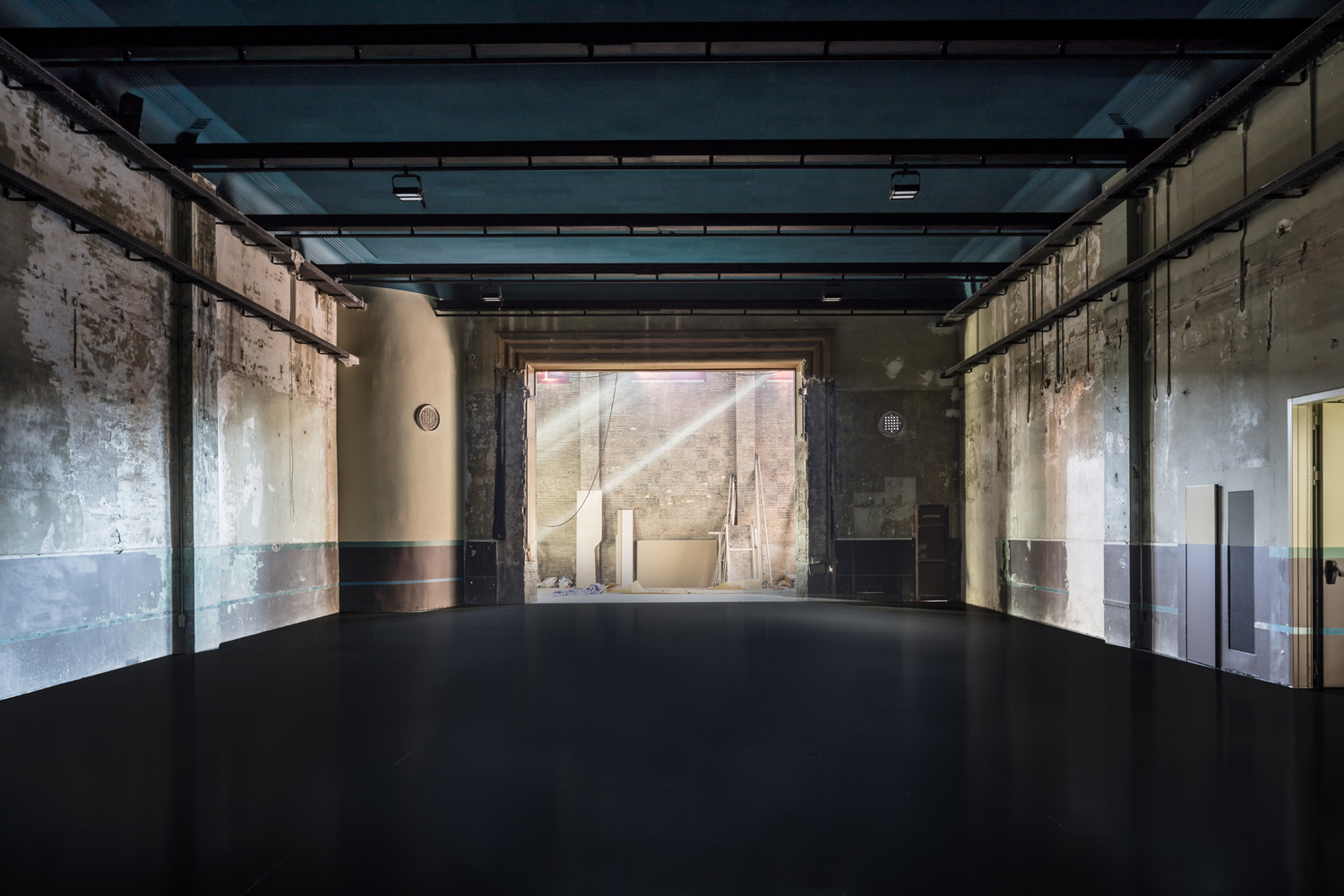 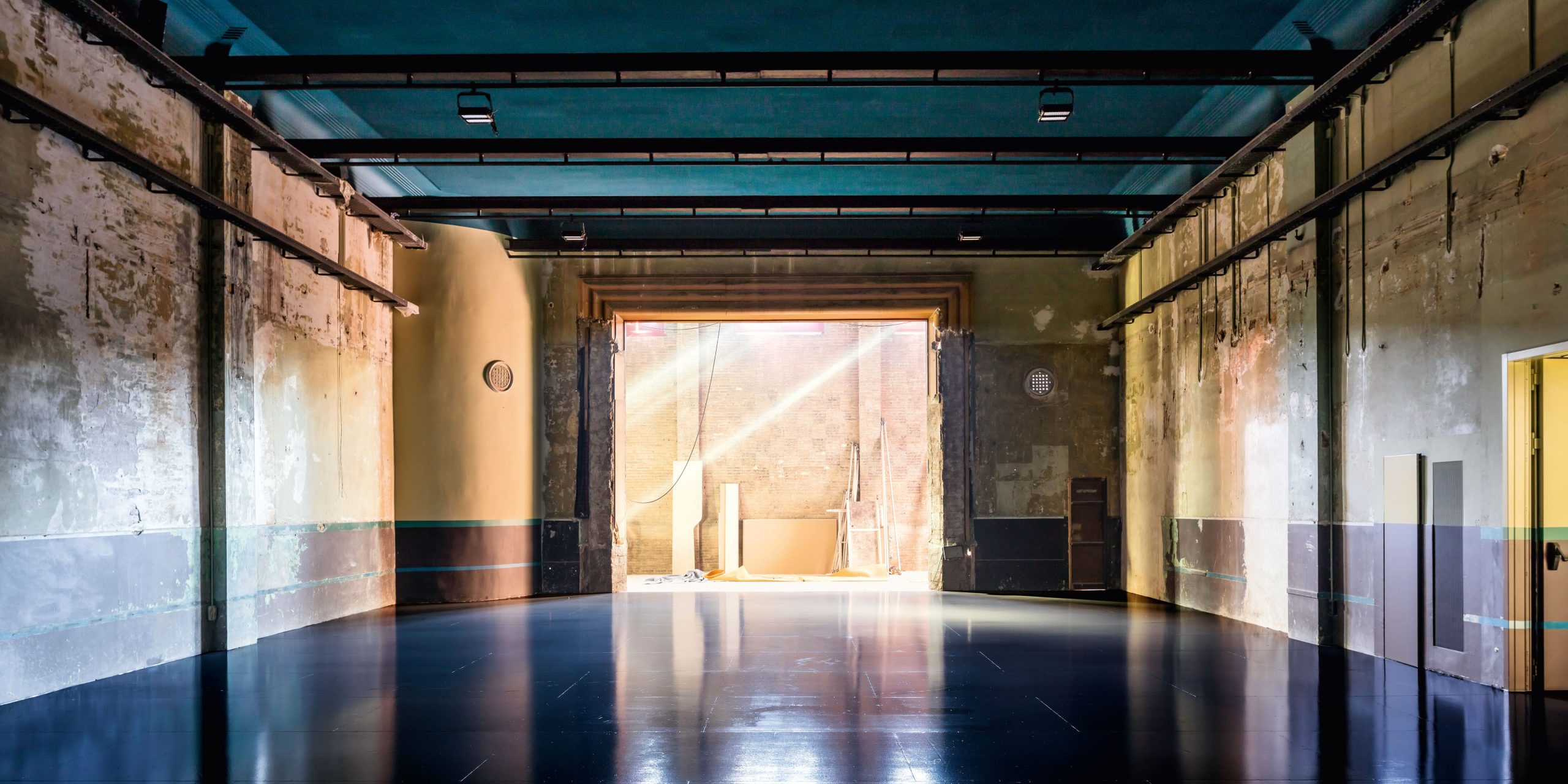 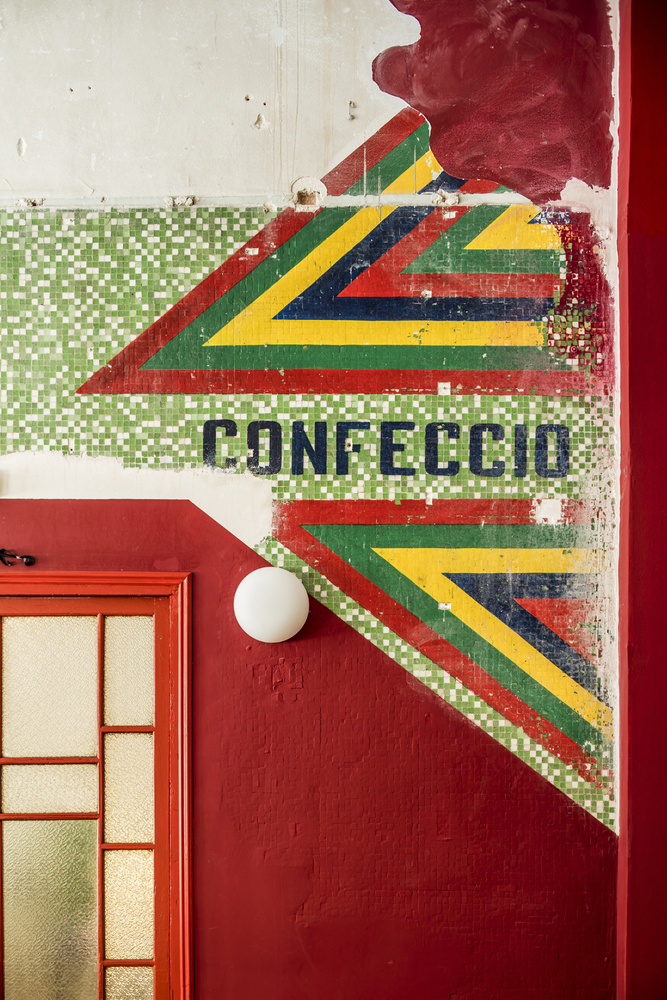 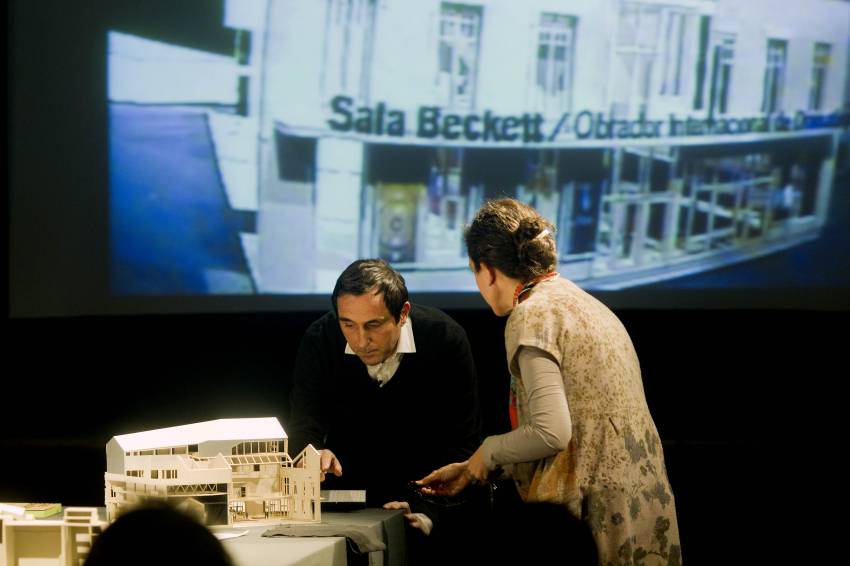 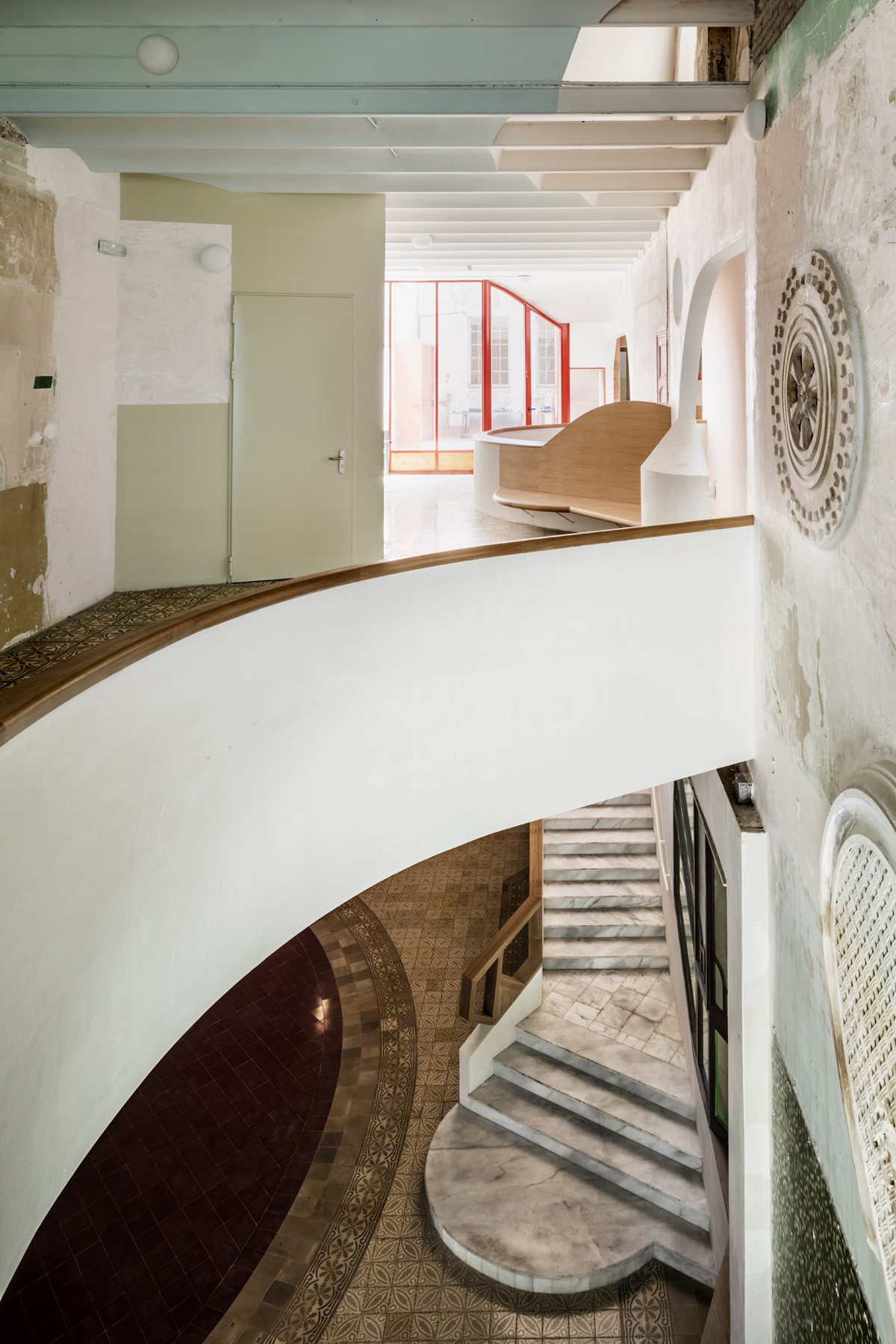 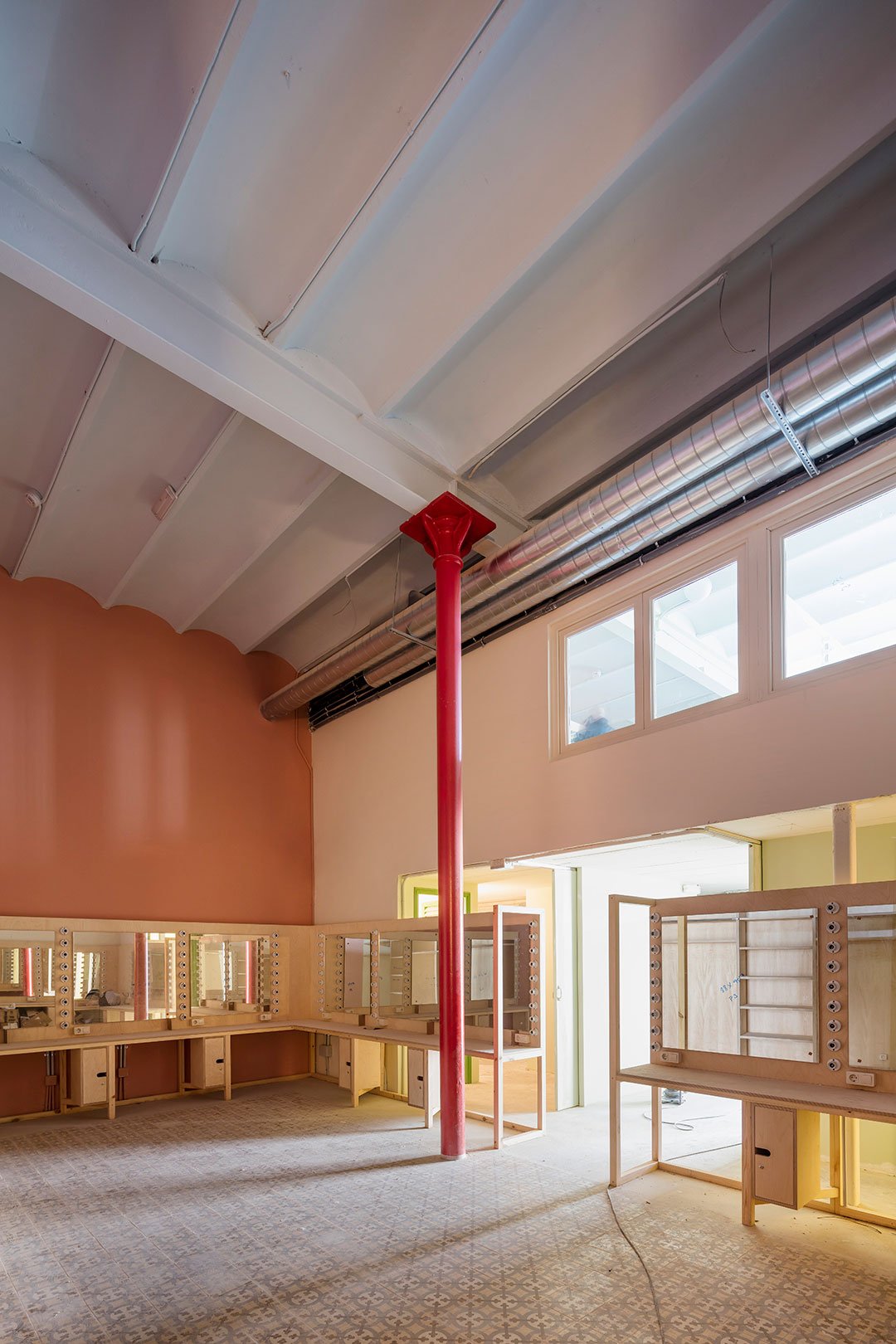 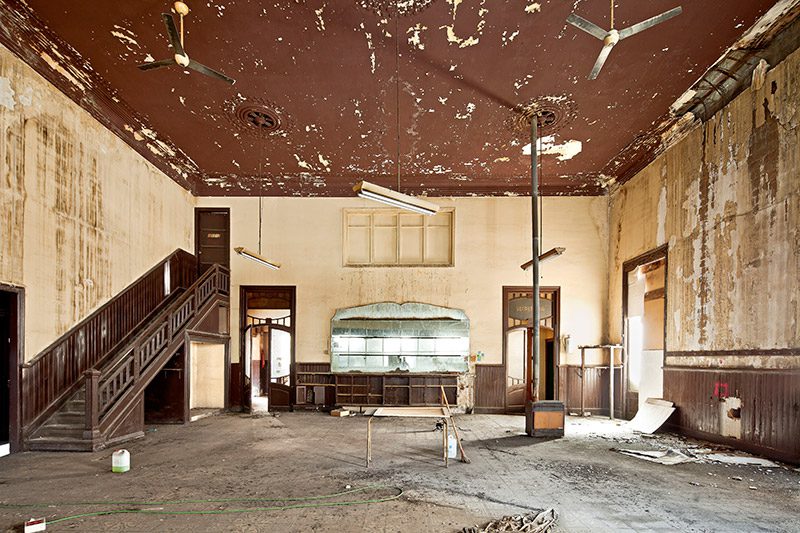 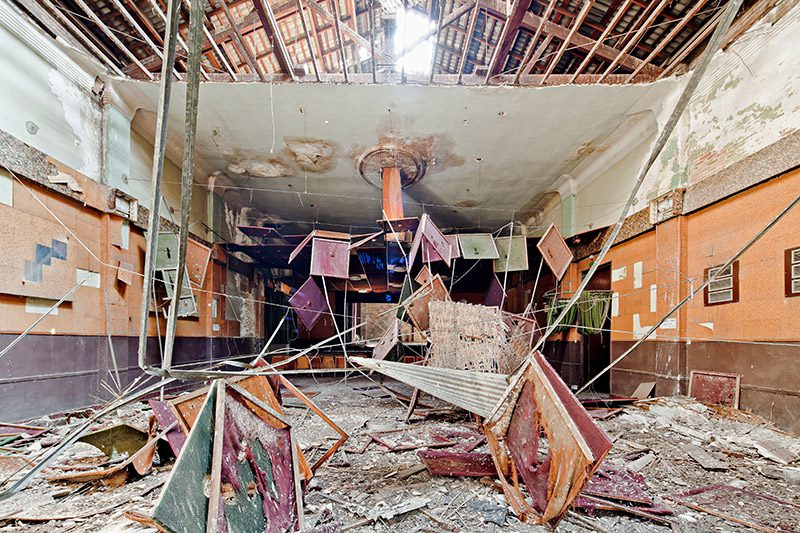 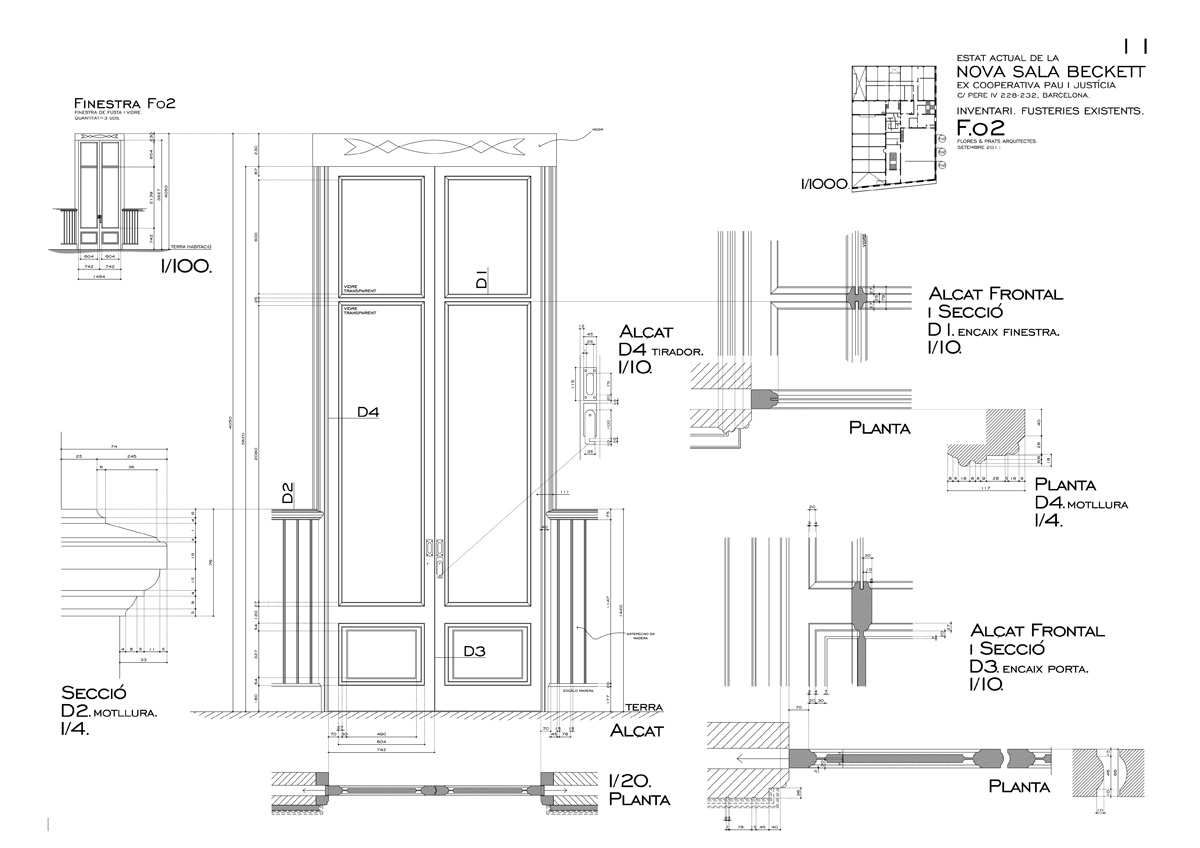