Founded in 1995 by landscape designer Maggie Keswick Jencks and her husband, the American landscape architect and architecture critic Charles Alexander Jencks, the British Maggie Keswick Jencks Cancer Caring Centers Trust charity, known for its Maggie’s Centers, creates buildings where people with cancer can receive free practical and psychological support, meet people who are facing and therefore understand the same problems, or simply carve out moments of tranquility to collect their thoughts. The first center, designed by Richard Murphy Architects was built in 1996 in Edinburgh, Scotland, and since then the charity has today 27 centers in the United Kingdom, one in Hong Kong, one in Tokyo and one in Barcelona.

Maggie Keswick never saw the completion of the first Maggie’s Center since she died with cancer in July 1995, at the age of 53, but she laid out precise guidelines for the future centers, collected in her A View from the Front Line. Maggie Keswick Jencks was determined, learning from her own experience, to help people with cancer never lose hope and the joy of life. For this reason, she believed people needed welcoming and relaxing spaces, far from hospital environments, where they could receive support, information and strategies to reduce tension.

To create the ideal conditions, the centers, while maintaining their own architectural identity, must have common characteristics, such as the small size, the presence of a common kitchen, the flexibility of the spaces and the absence of a reception, which would conflict with the aim of creating a domestic atmosphere. After having entrusted, over the course of its 26 years, the design to important architectural firms, which contributed to the success and growth of this extraordinary project – we cite among the various names those of Frank O Gehry, Zaha Hadid, Richard Rogers, Thomas Heatherwick, Ab Rogers, Rem Koolhaas, Benedetta Tagliabue – the charity added this year its new Southampton center, a peculiar 360 sqm building designed by the award-winning London-based architecture firm AL_A, founded by Amanda Levete in 2009, in collaboration with the landscape architect Sarah Price.

The site for the construction of the new Maggie’s Center in Southampton was a very challenging one for the designers of AL_A, as it was marked by a set of nondescript buildings surrounded by a series of parking lots. The solution was to imagine that – Amanda Levete explained – a piece of garden had been transported from the nearby New Forest National Park into the midst of the hospital’s concrete landscape, bringing with it serenity and a bit of magic. For the garden, the landscape architect Sarah Price was inspired by the diverse flora of the New Forest, with birch trees, Tibetan cherry trees, wood anemones, orchids, wild garlic, lesser celandines, primroses and bluebells.

The garden was then divided into four quarters by four walls made up by blocks of porcelain stoneware, a sustainable material, which appears to come from the soil of the gardens. The porcelain stoneware walls have the dual function of supporting the timber roof structure and of insulation. The soft colors of the clay and the tones of the glazes, which promote a sense of stillness and calm, were specifically designed and created for this project. The four corners of the structure were instead clad in rippled stainless steel which reflects the ceramic walls and the green landscape, creating the illusion that the garden is even larger than it actually is.

The one-storey building, which seems to emerge from the garden, has large windows that flood the interior spaces with natural light. A common kitchen, illuminated by a large circular skylight, is, in accordance with the guidelines written by Maggie Keswick Jencks, the heart of the building and is, with its domestic atmosphere, the first environment that welcomes the visitors. The ceramic walls and a series of white movable walls then separate the four rooms in such a way as to provide flexible and semi-private spaces. 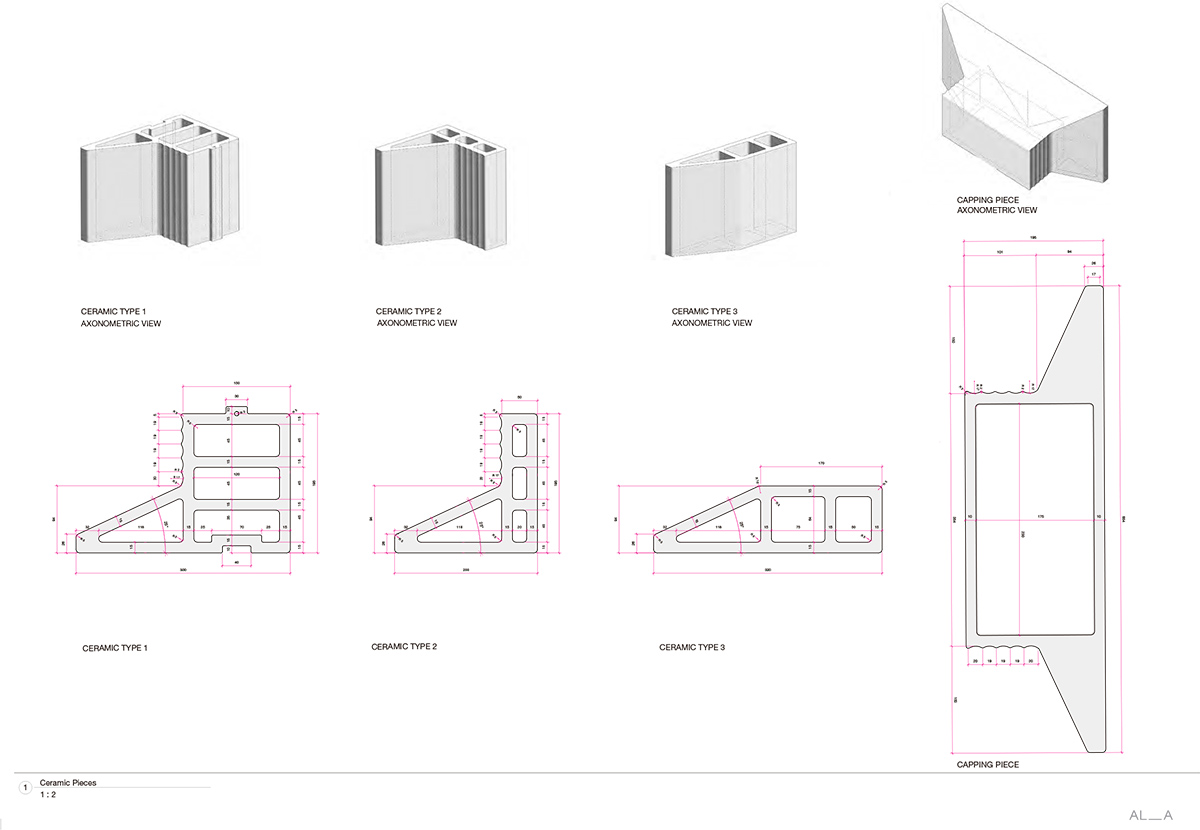 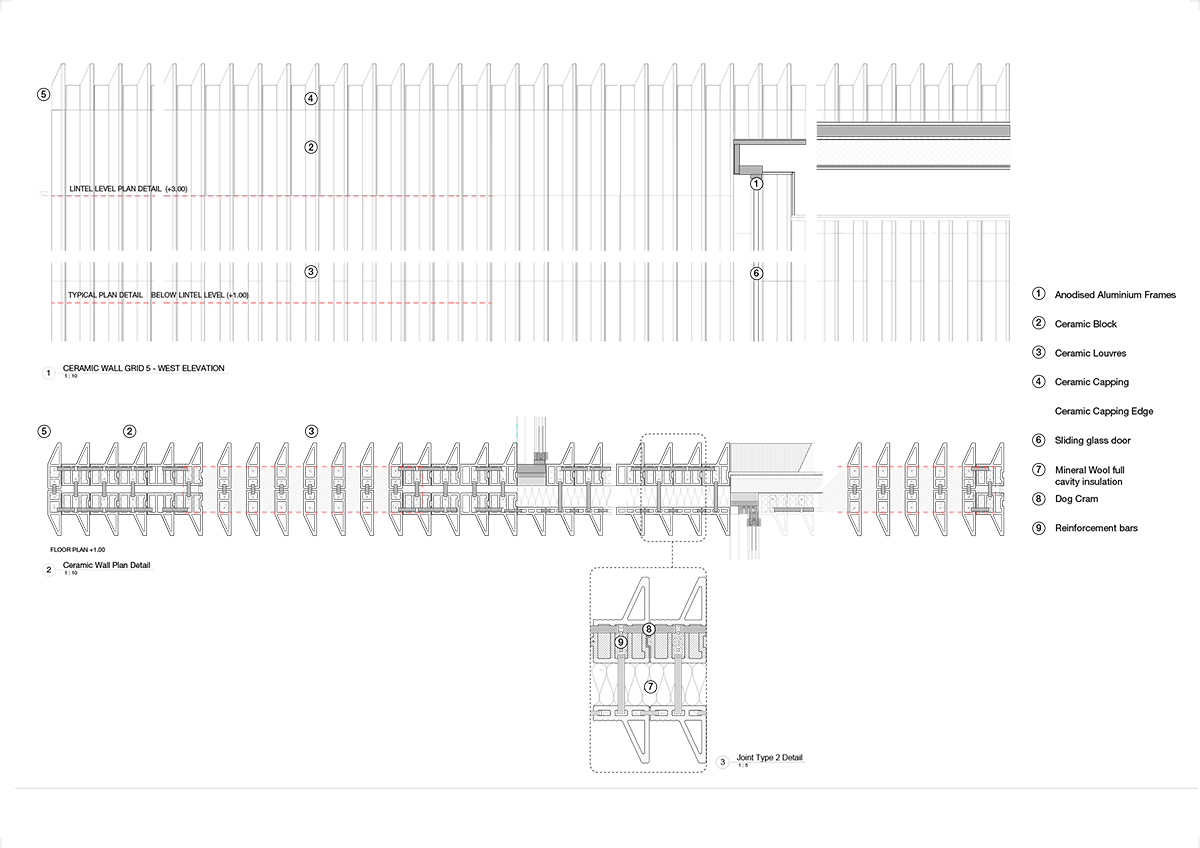 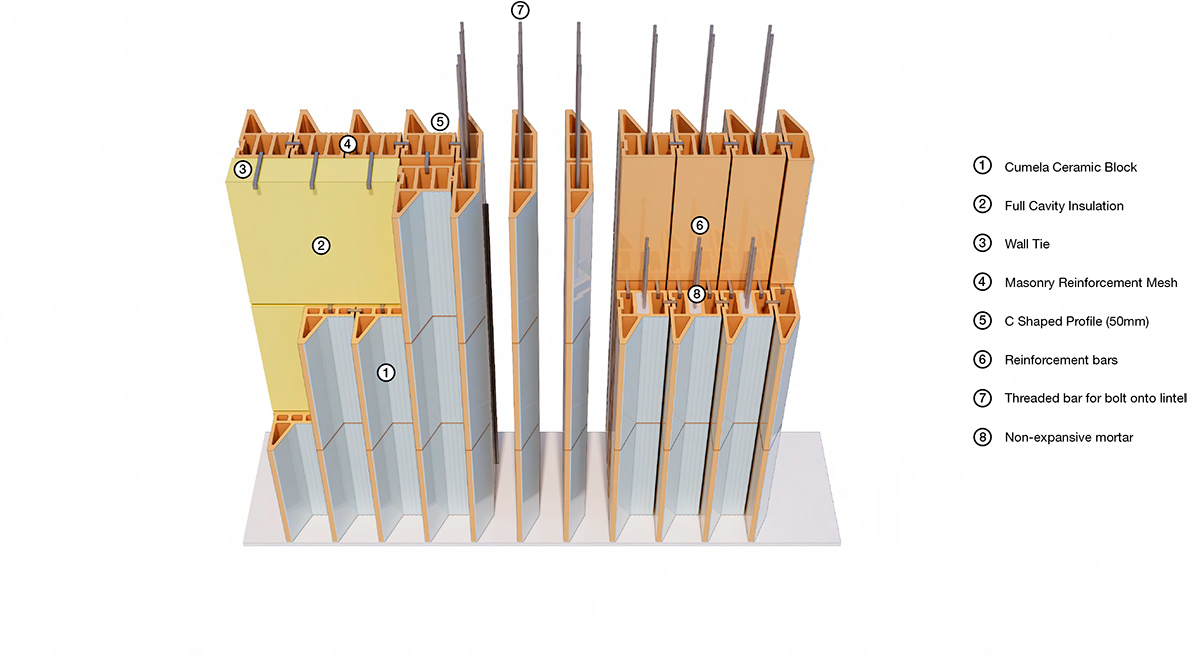 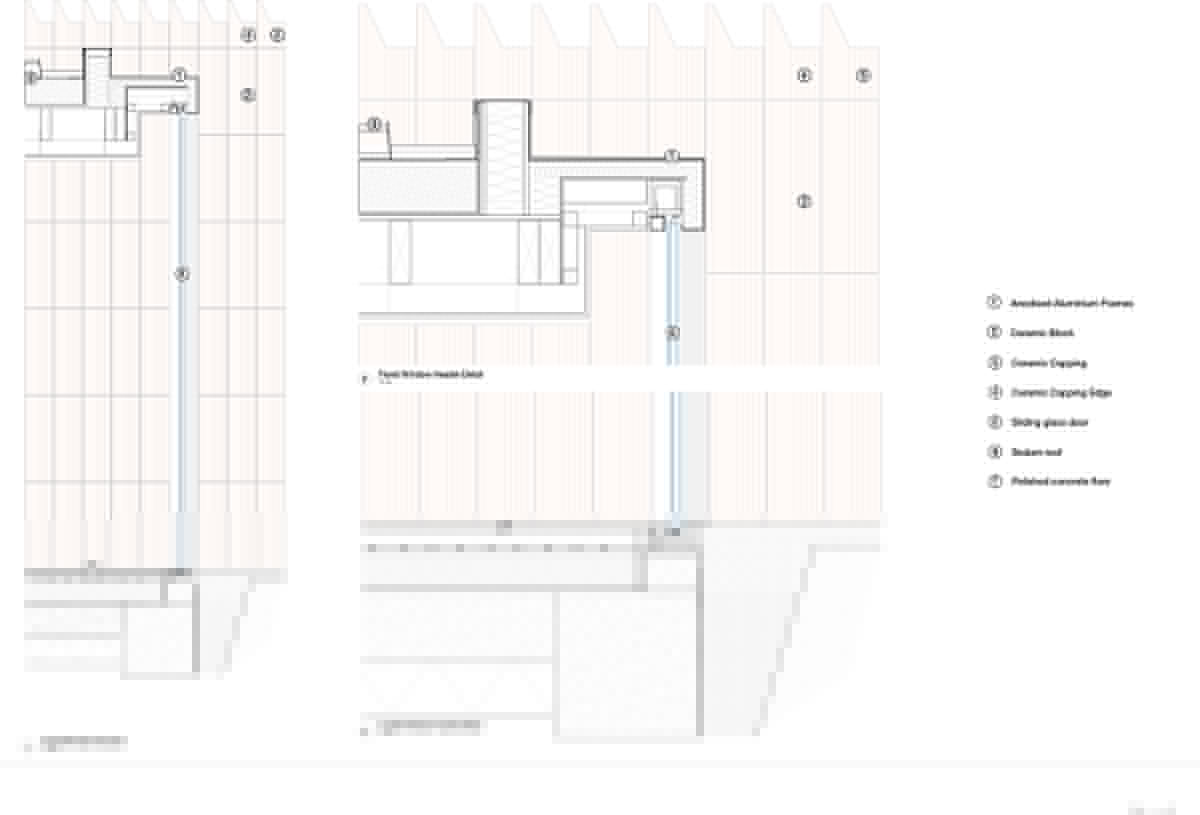 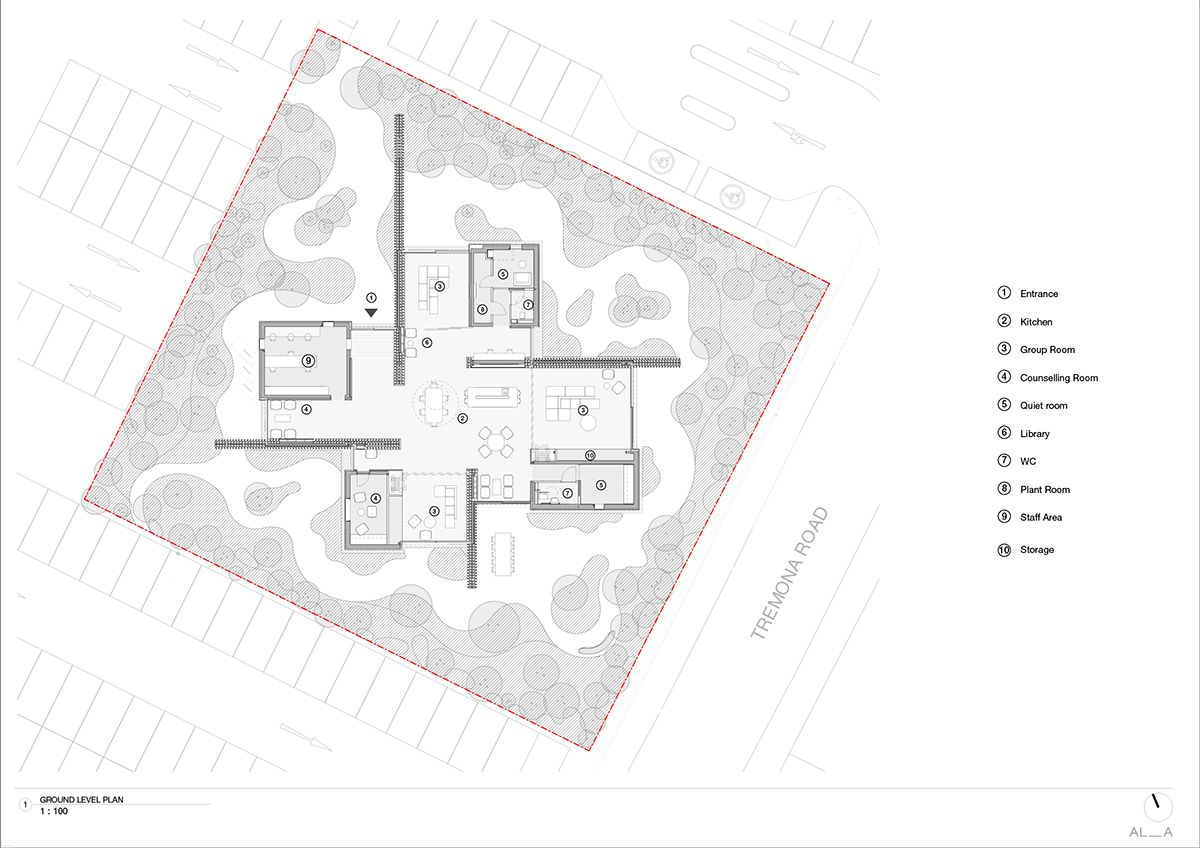 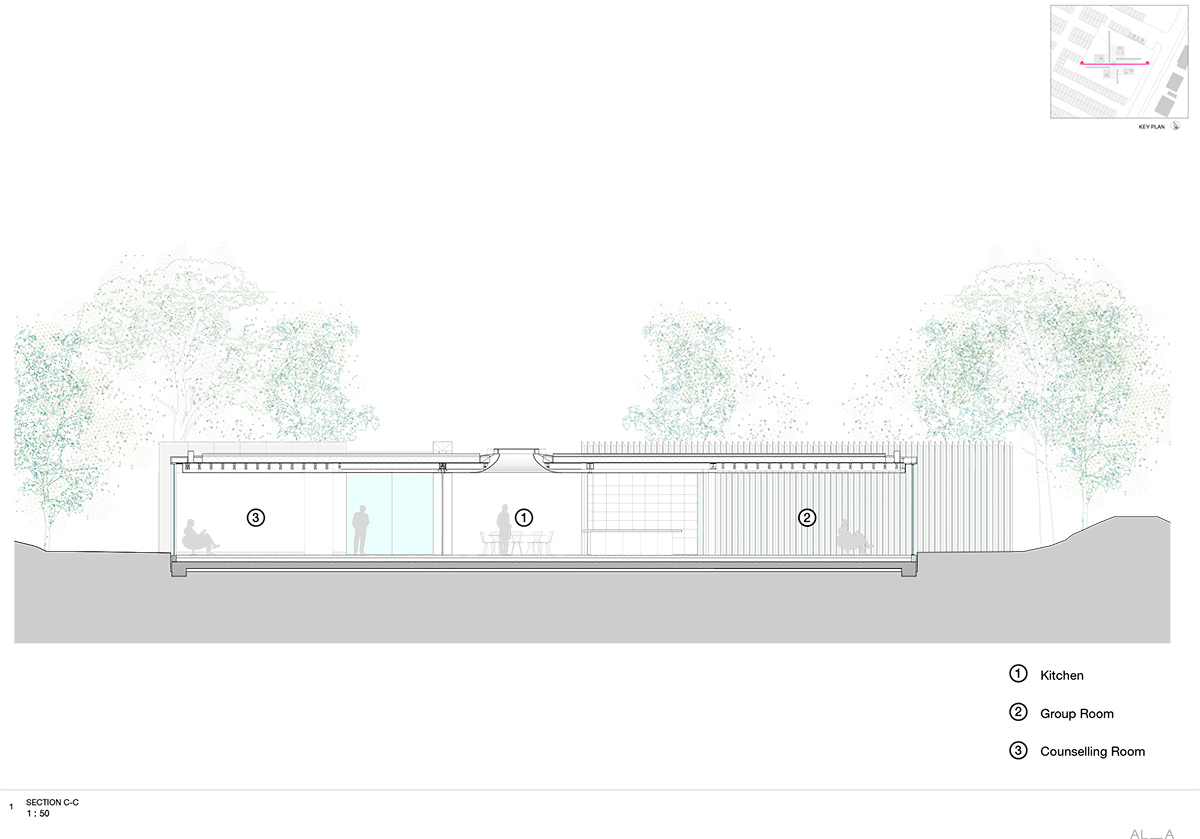 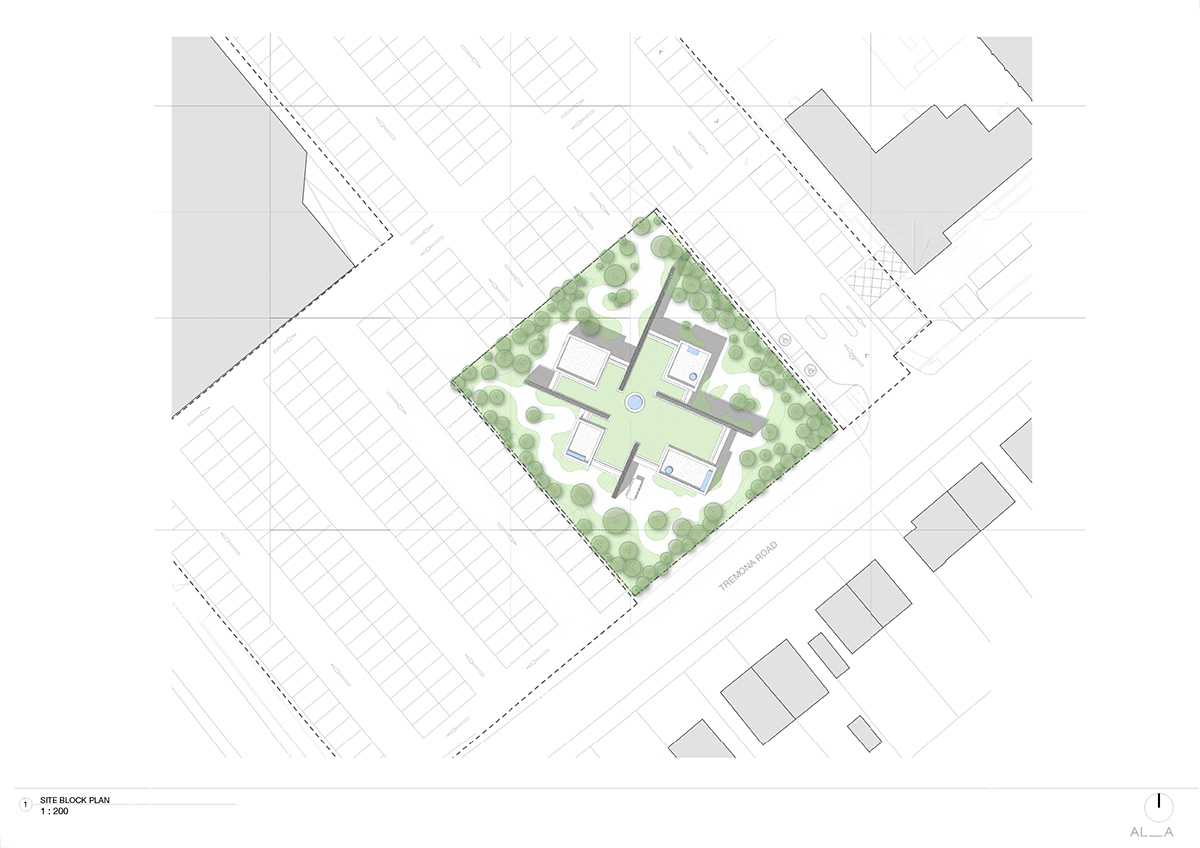 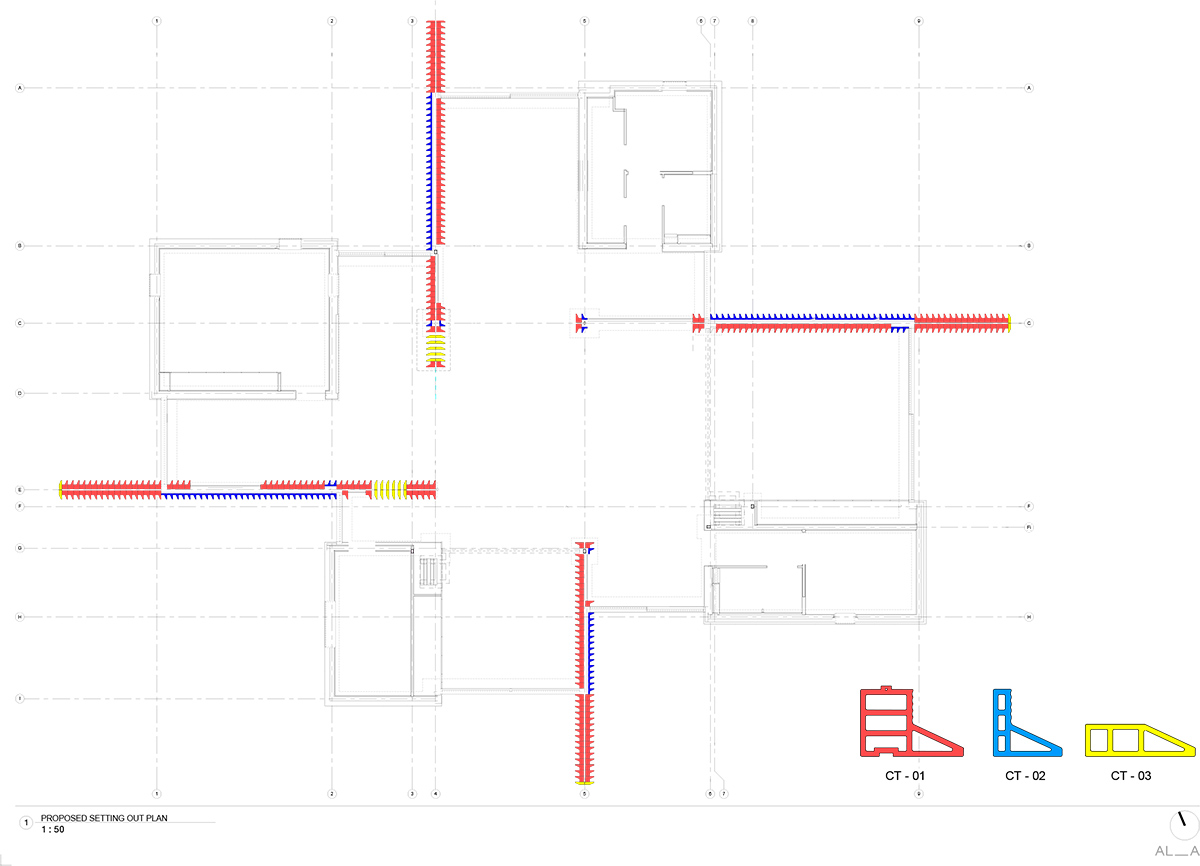