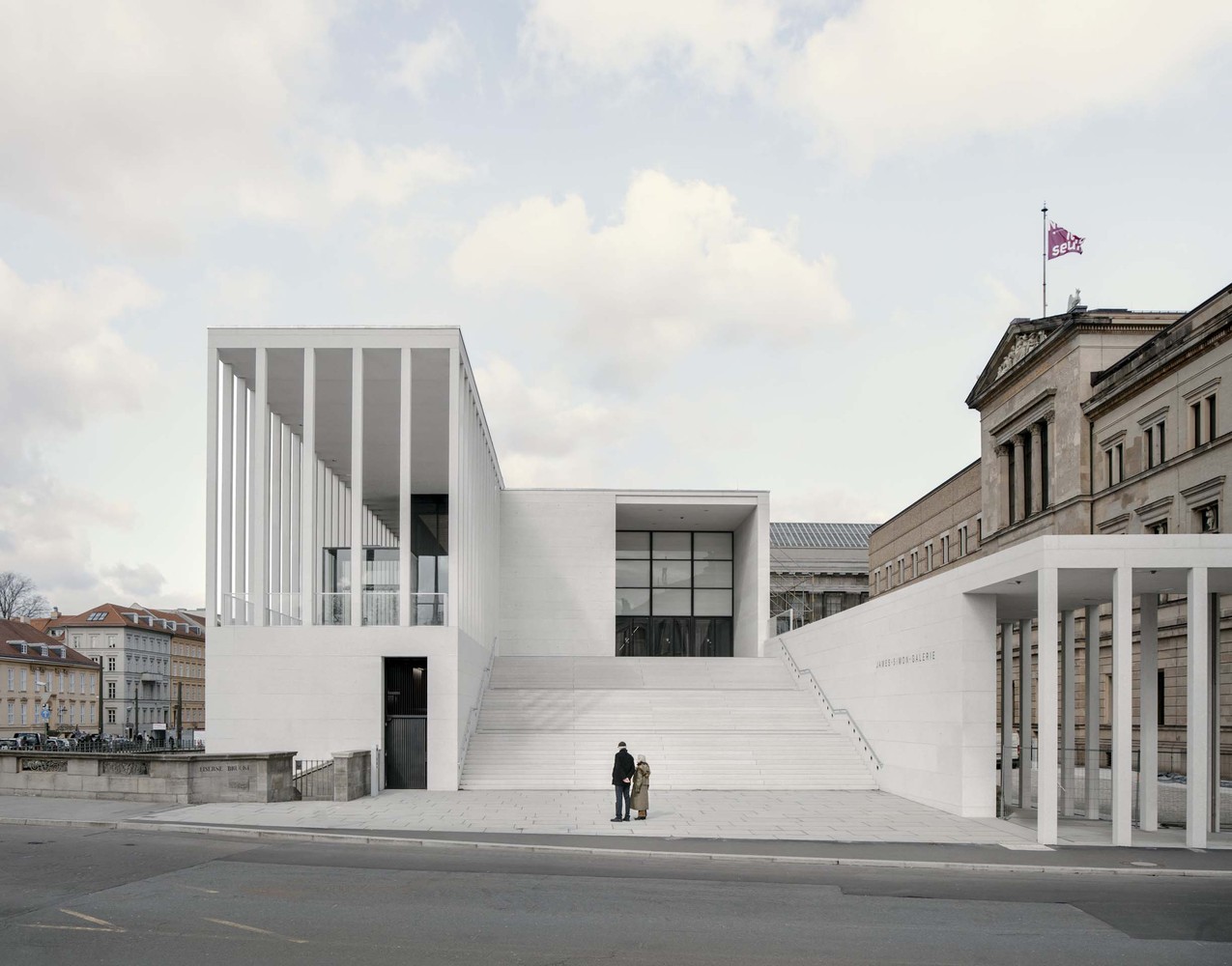 Completed in December 2018, the new building that serves as entrance to the Berlin’s Museum Island – awarded UNESCO World Heritage Status in 1999 – is named after James Henri Simon, the Jewish entrepreneur and philanthropist who donated before his death, in 1932, most of his significant art collections, including the famous Nefertiti bust, to the Berlin State Museums. The building, designed by the Berlin office of David Chipperfield Architects, is located between the Kupfergraben canal and the southwest façade of the Neues Museum, one of the five museums that, together with the Altes Museum, the Pergamonmuseum, the Bodemuseum and the Alte Nationalgalerie, forms the complex of the Museum Island.

Designed in a beautiful neoclassical style in the mid-nineteenth century by architect Friedrich August Stüler, student of Karl Friedrich Schinkel, the Neues Museum, which was heavily damaged in World War II, was reopened in 2009 after an intensive restoration headed by architect Chipperfield.

Together with the Archaeological Promenade – the underground walkway that will link all the museums except the Alte Nationalgalerie – the James Simon Galerie, which houses a cafeteria, the welcome facilities such as a large cloakroom, toilet facilities and lockers, a 300-seat auditorium and some temporary exhibition spaces, represents the backbone of the Island’s masterplan that was also developed by Chipperfield in 1999. Its role – Chipperfield said – is not so much defined by its function but rather by its responsibility as a public building at the heart of the city.

In addition to perfectly integrating into the monumental context of the Berlin’s Museum Island, the high stone plinth, above which the tall colonnade of the James Simon Galerie designed by David Chipperfield Architects rises up, has the important function to reinforce the banks of the Kupfergraben canal. Above the plinth, contrasting its imposing solidity, a series of slender columns borders the gallery spaces and characterizes the architectural language, proposing a modern and unexpected interpretation of the original nineteenth-century sketch by Frederick William IV of Prussia for a museum complex conceived as an Acropolis dedicated to the Arts and Science.

Large part of this principal level is accessible to the public also outside opening hours, further extending the public realm of the complex. The slender columns continue the Fridrich August Stüler colonnade that originally ended at the nearby Neues Museum, creating a new small colonnaded courtyard between one of its façades and the gallery. The three flights of the imposing steps, set between the elongated plinth and the lower colonnade, will invite the many visitors of the museums cluster into the building from the next summer, when it will be officially inaugurated. From here visitors will enter the main exhibition floor of the Pergamonmuseum through a generous foyer with cafeteria, located at the upper level. A mezzanine floor beneath the main entrance foyer accommodates the museum shop, the cloakroom and the toilet facilities, while the temporary exhibition spaces and the auditorium are situated in the basement level.

Just as the architectural language of the new James Simon Galerie refers, in the colonnade and in the staircase, to the stylistic code of the architects involved, like Karl Friedrich Schinkel and Friedrich August Stüler, in the design of the buildings of the Museum Island, the materiality of the building, dominated by smooth in-situ concrete in its interior spaces, finds its classical soul in the external façades in reconstructed stone with natural stone aggregates which blends with the rich palette of the materials used, in particular with the limestone and the sandstones. 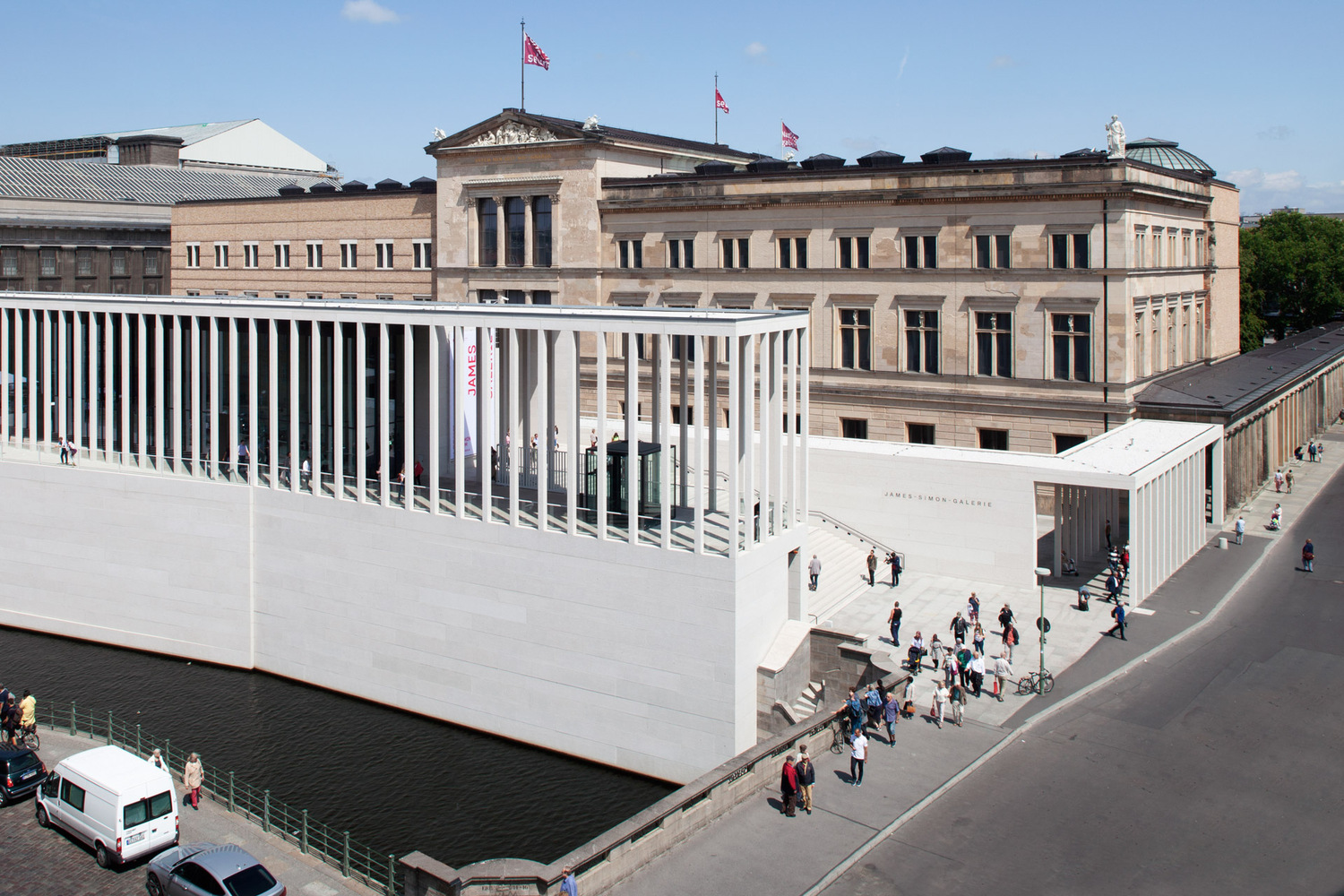 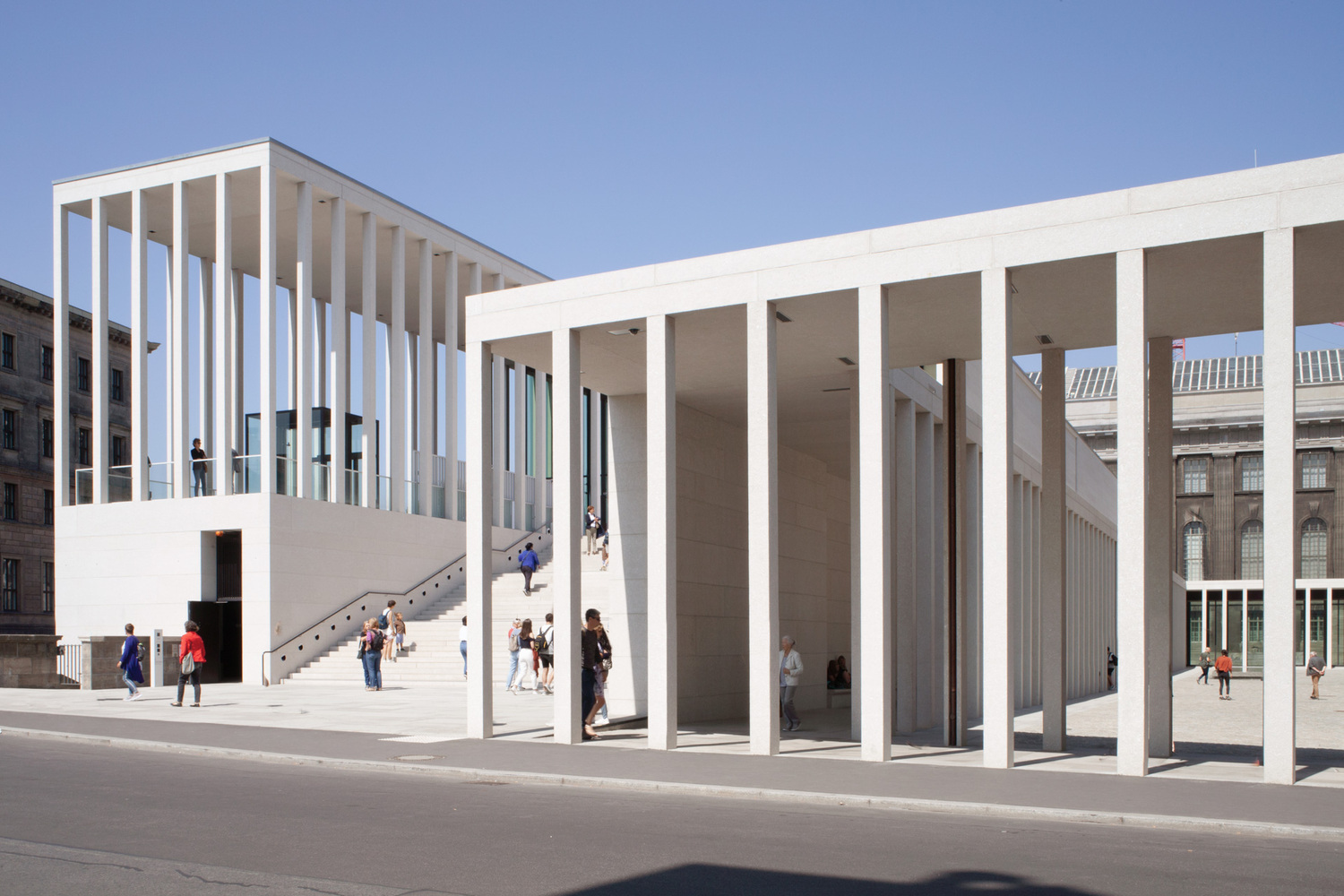 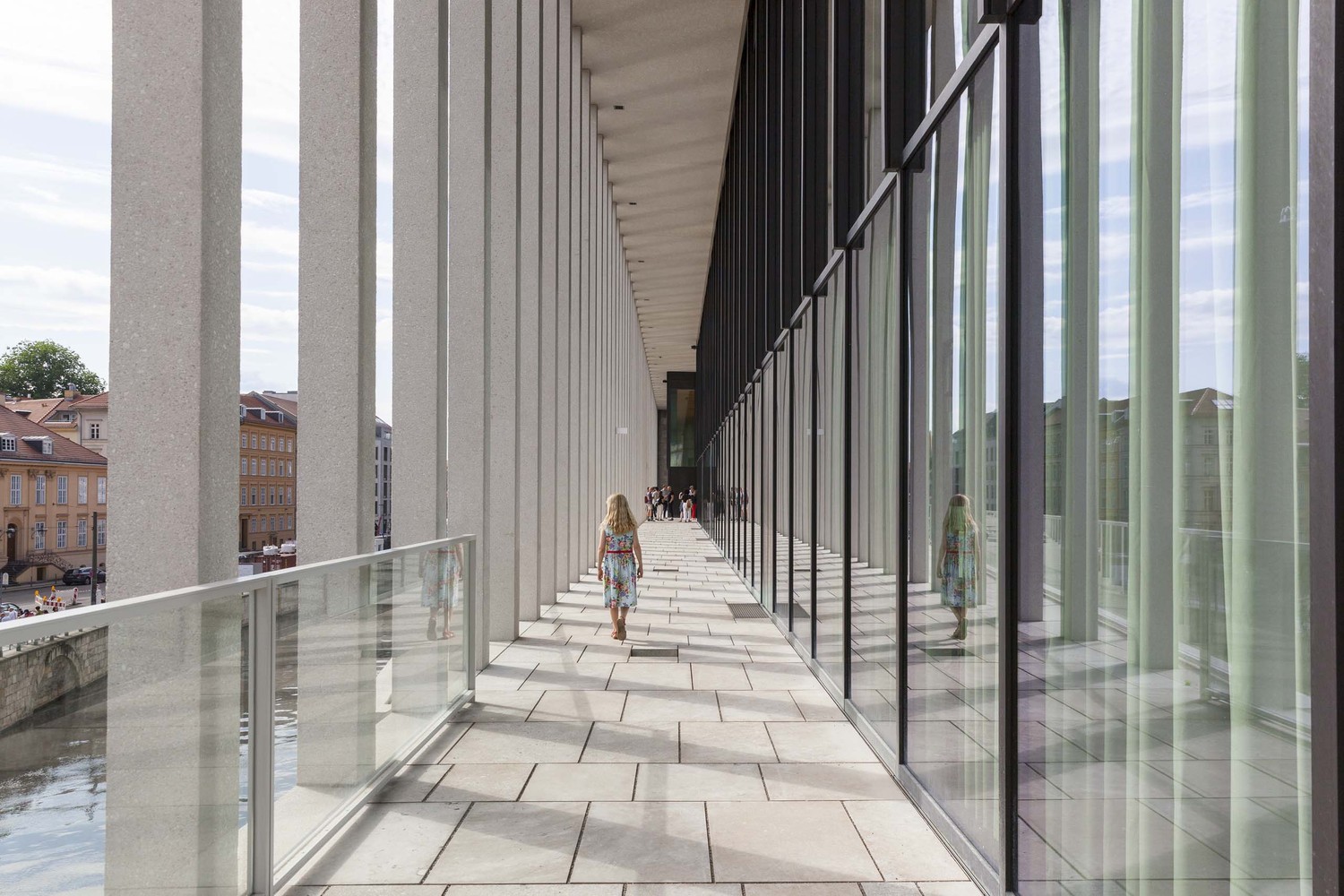 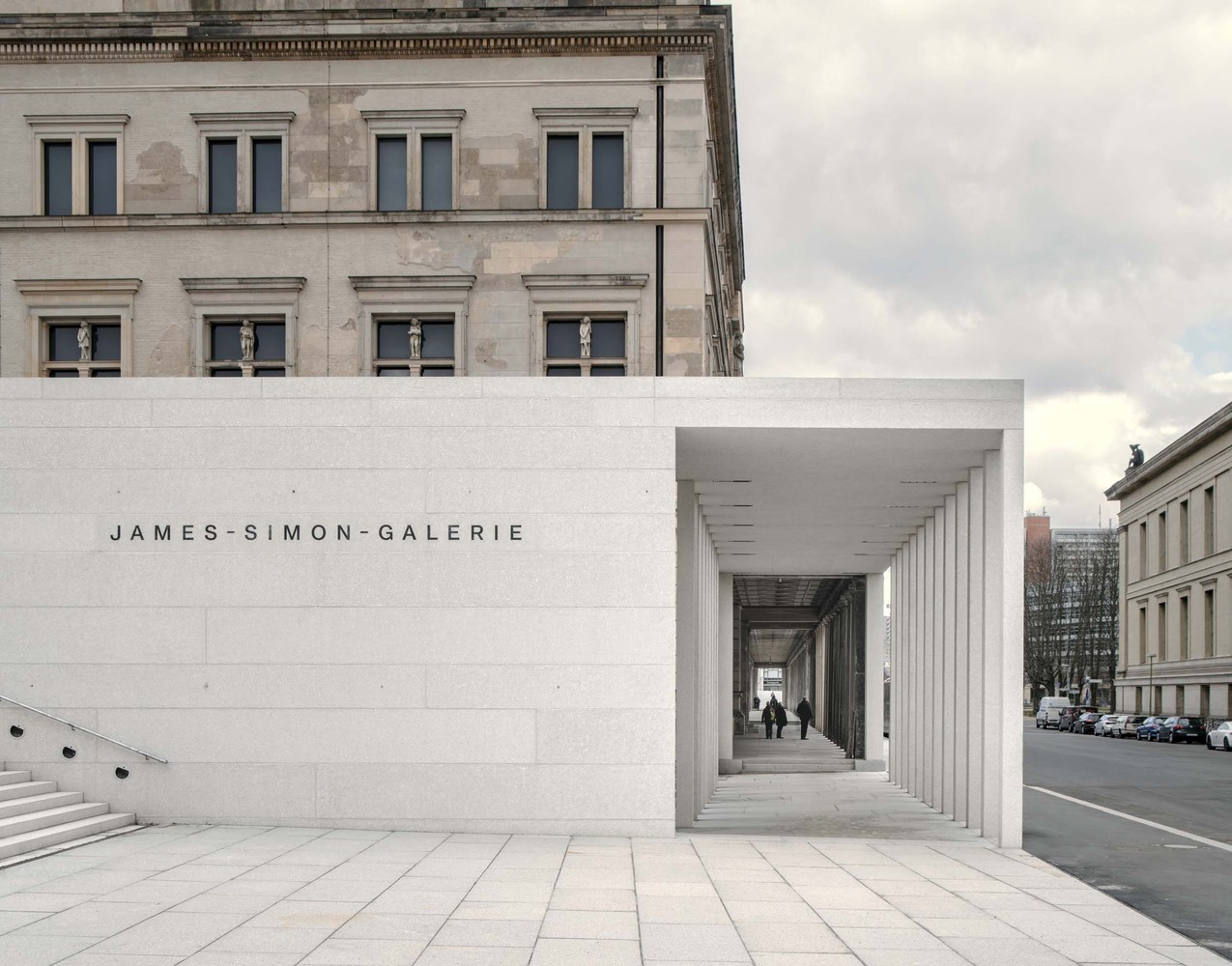 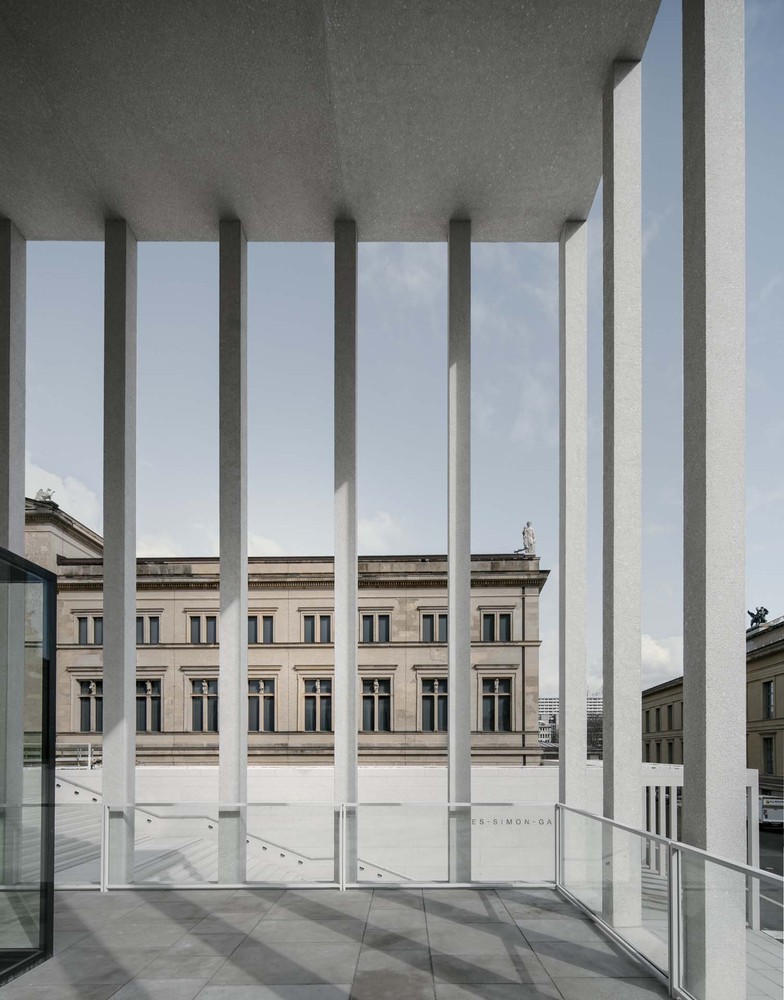 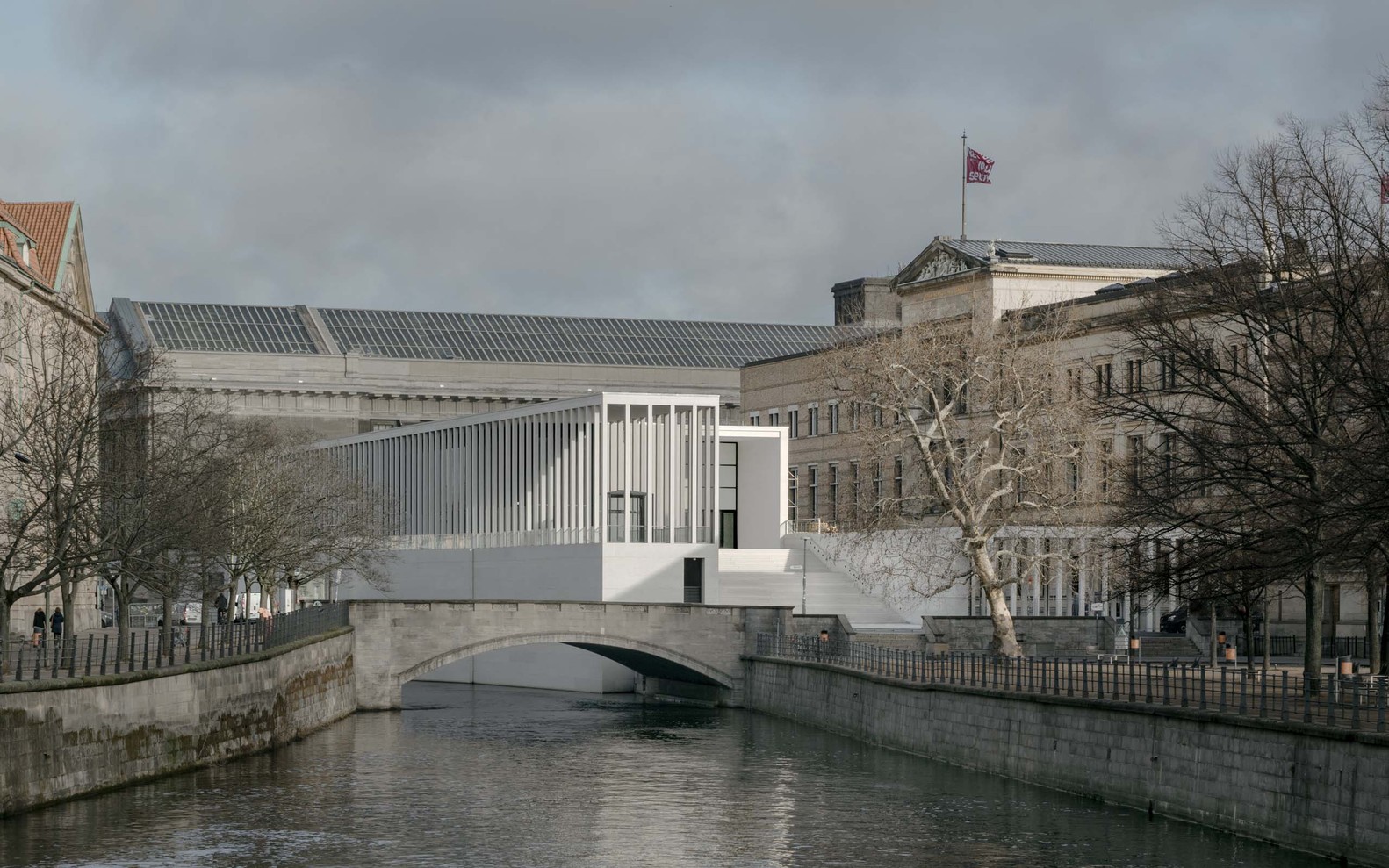 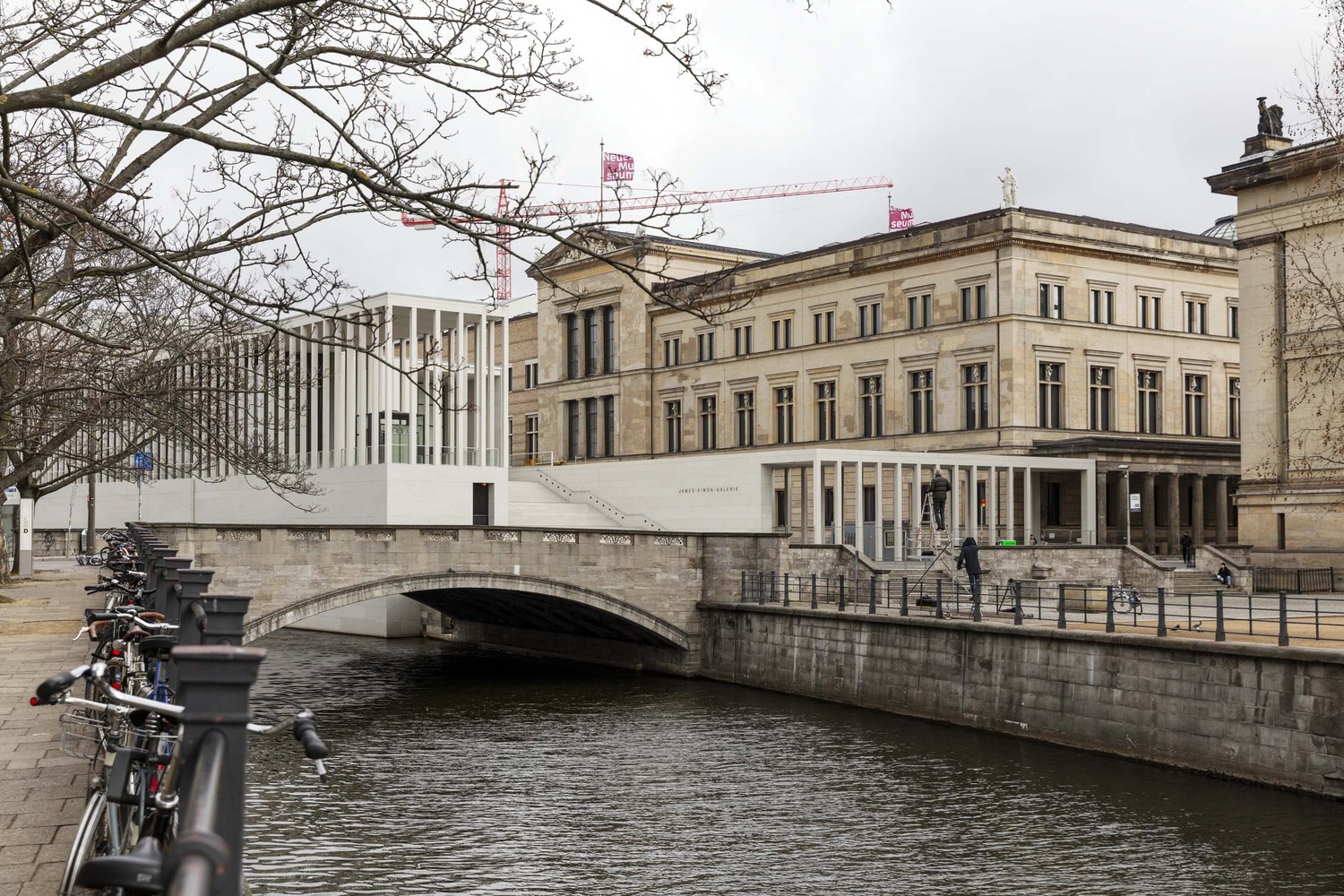 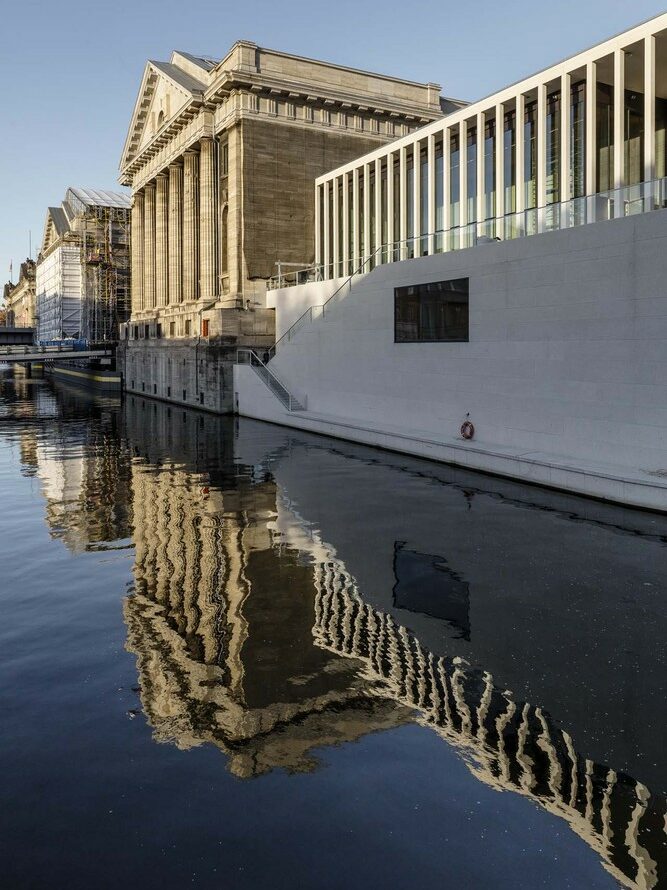 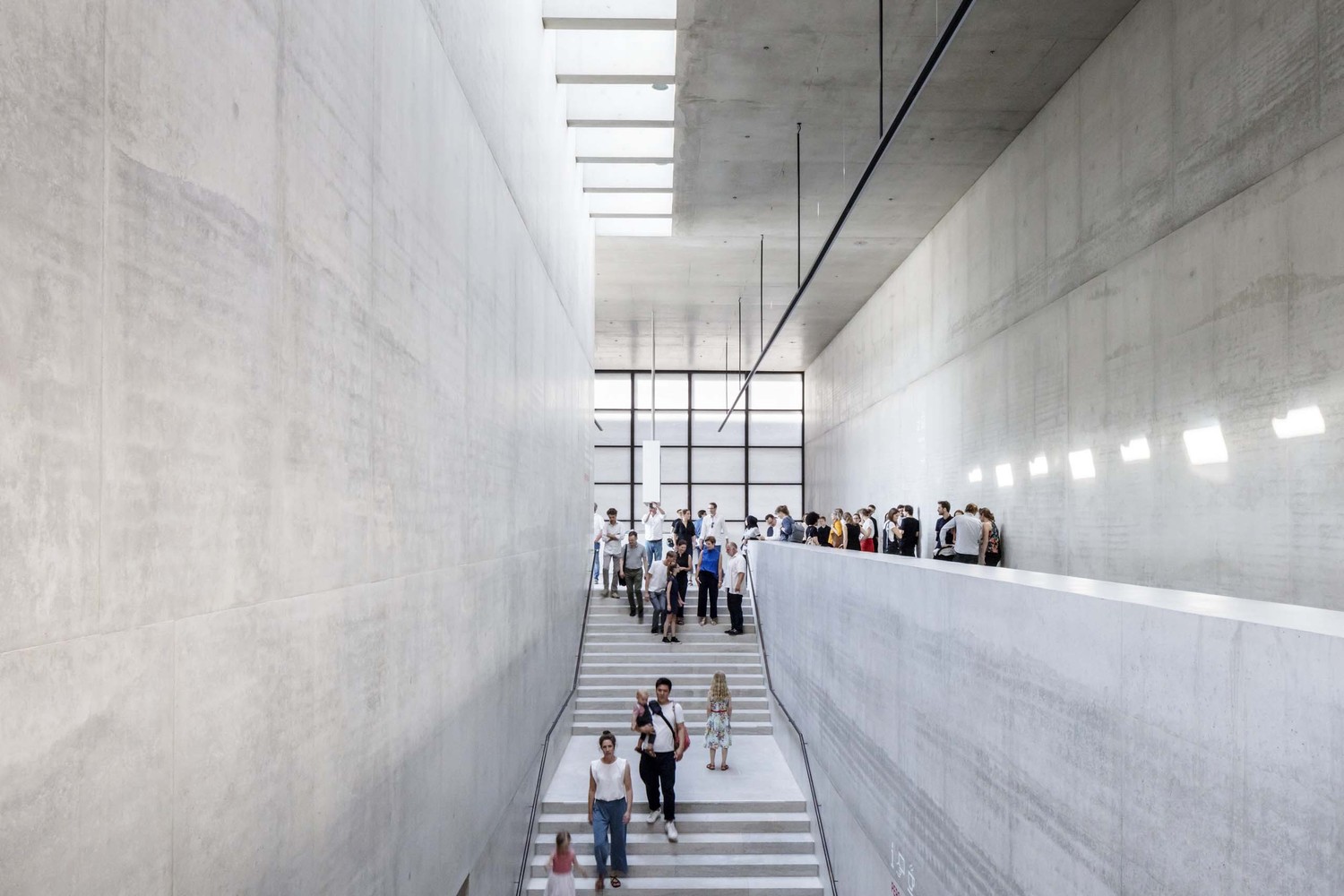 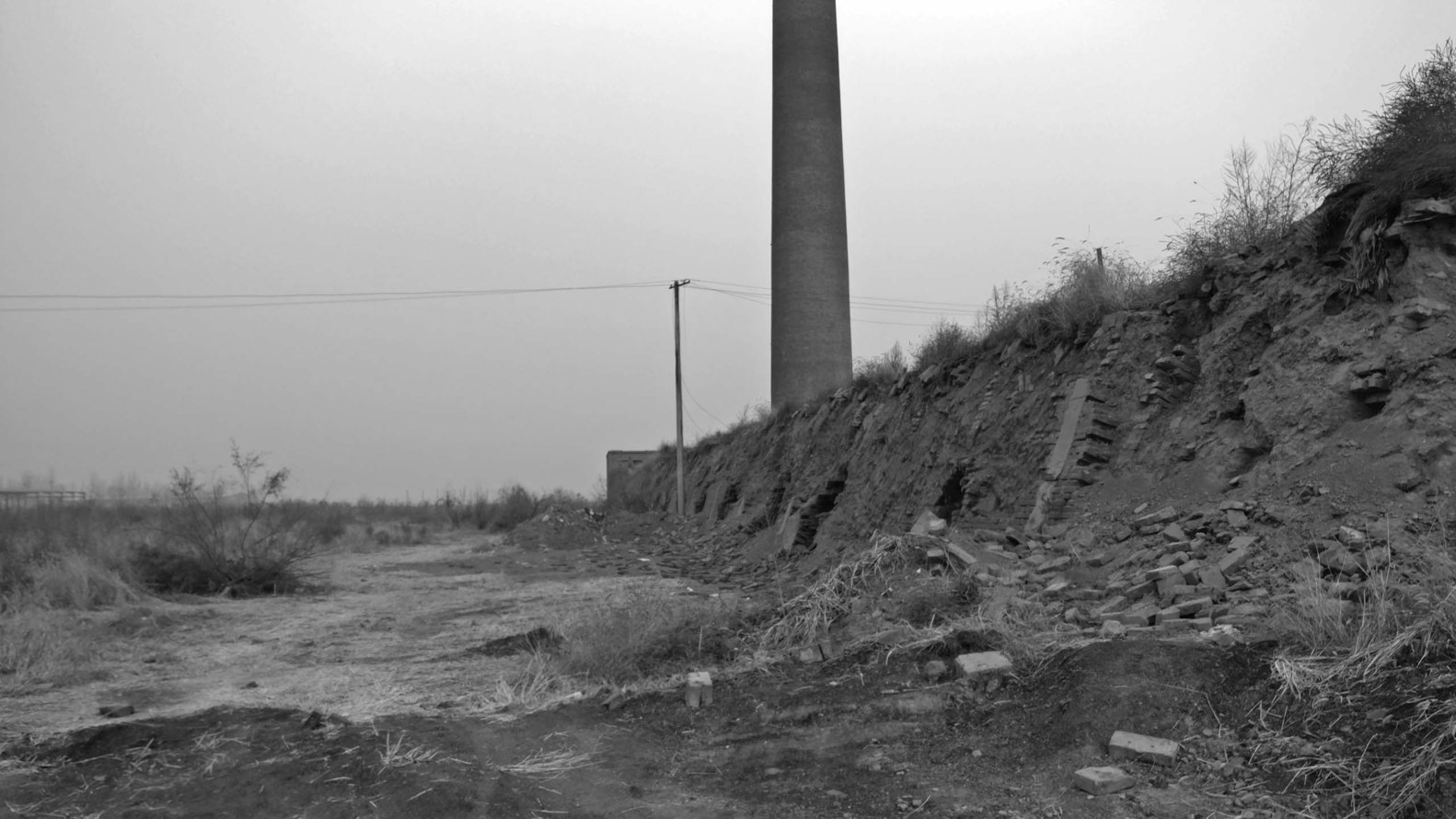