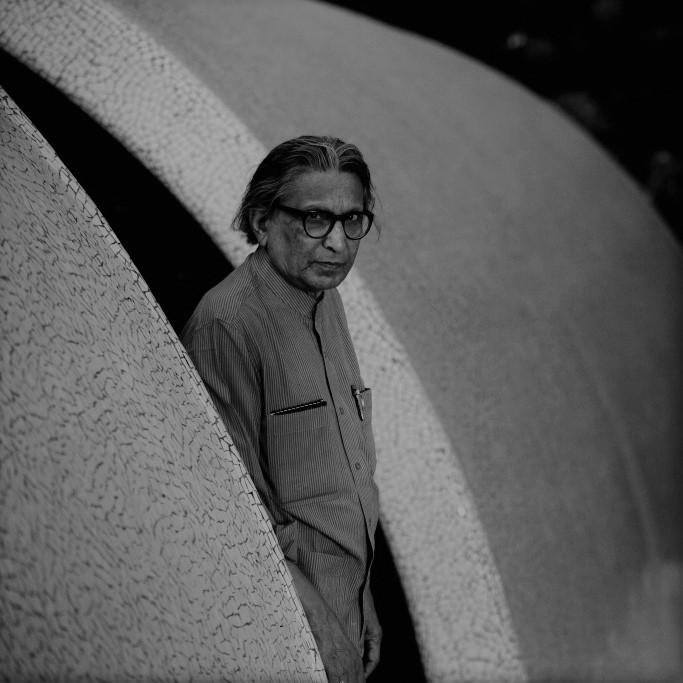 Born in Pune, India in 1927 into a family of furniture makers, he graduated in 1947 from the JJ College of Architecture in Mumbai. After completing his studies, he sailed for a short period to London, before settling in Paris, where he worked as an apprentice, from 1951 to 1954, in the studio of the famous architect Le Corbusier. In 1954 he returned to India to supervise some of Le Corbusier’s projects, first in Chandigarh and later in Ahmedabad, where he settled permanently. In 1956 he founded, together with two architects, his own practice Vastushilpa, later renamed Vastushilpa Consultants, which today includes five partners and sixty employees and has completed more than 100 projects since its inception. In 1958 he became a member of the Graham Foundation for Advanced Studies in Fine Arts. In the early ‘60s he met in Philadelphia architect Louis Kahn, with whom he designed, in 1962, the Indian Institute of Management in Ahmedâbâd and, in the same year, he started to design one of the most celebrated projects of his career, The Indian Institute of Management Bangalore (IIM Bangalore or IIMB), completed in 1977. Doshi has established and directed several Indian institutions, including the School of Architecture and the Center for Environmental Planning and Technology. In 1981 he completed another of his most iconic projects: Sangath, his own architecture studio in Ahmedabad. His work has been widely awarded, nationally and internationally; his awards include the Padma Shree National Award Government of India (1976); Gold Medal, Indian Institute of Architects (1988); Gold Medal, Academy of Architecture of France (1988); Aga Khan Award for Architecture (1993-1995) for the Aranya Community Housing project; Prime Minister’s National Award for Excellence in Urban Planning and Design, India (2000); Global Award for Lifetime Achievement for Sustainable Architecture, Institut Francais d’Architecture, Paris (2007). He received a honorary doctorate from the University of Pennsylvania (1990) and the McGill University in Canada (2005) and in 2011 he received the highest French award for art, “Officer of the Order of Arts and Letters”. He was commissioner of the Pritzker Prize, the Indira Gandhi National Center for Arts and the Aga Khan Prize for Architecture. In 2018 he was the first Indian architect to be awarded the prestigious Pritzker Architecture Prize, considered the equivalent of the Nobel Prize, for his immense contribution to the world of architecture. He has been Visiting Professor at numerous Institutes, including: Massachusetts Institute of Technology; University of Pennsylvania, Philadelphia; University of Illinois, Urbana Champaign; Rice University, Houston; Washington University in St. Louis and University of Hong Kong.

The last few months have shown us how modern architecture has and should have to do more than anything else with social well-being and health protection. Health safeguard and design have been actually going hand in hand for several centuries: the cholera outbreak that spread across London in the mid-nineteenth century was at the origin of the construction of a modern sewer system, while the outbreaks of tuberculosis at the beginning of the twentieth century, that led architects to collaborate with doctors and nurses at the design of sanatoriums, resulted in the development of ventilation and aeration systems, later applied also to residential architecture. The Paimio Sanatorium, designed in the first half of the twentieth century by Finnish architect Alvar Aalto, is an example of architectural innovation that has its roots in the observation of the benefits of sunlight on patients. After all, according to Alvar Aalto, the solution of the architectural problems lies in a necessary process of humanization. Humanization, a word that, today more than ever, must return to be at the centre of the architectural thought. Future – to whose design Indian architect Balkrishna Vithaldas Doshi, 2018 Pritzker Prize Laureate, has dedicated his observations in a section of this issue – will inevitably have to deal with the issues of sustainability, use of environmental and social resources, mobility and also urban density which, by no means adequate in many areas of the world, has made the social distancing imposed by the recent health emergency appear as something for rich people. Future techniques and solutions, which cannot be dismissed with simplistic formulas, more similar to slogans than to real strategies, must be the result of a long process of research, experimentation and respect for the environment and for the human being. When the world of design has finally embraced the thought expressed by architect Doshi in these pages that what we design is actually not the container, but the content and has structured the guidelines for a quality architecture, we will finally be able to respond to the most important question for the future of our planet, which is also the theme of the next Venice Architecture Biennale, curated by Lebanese architect Hashim Sarkis: How will we live together? 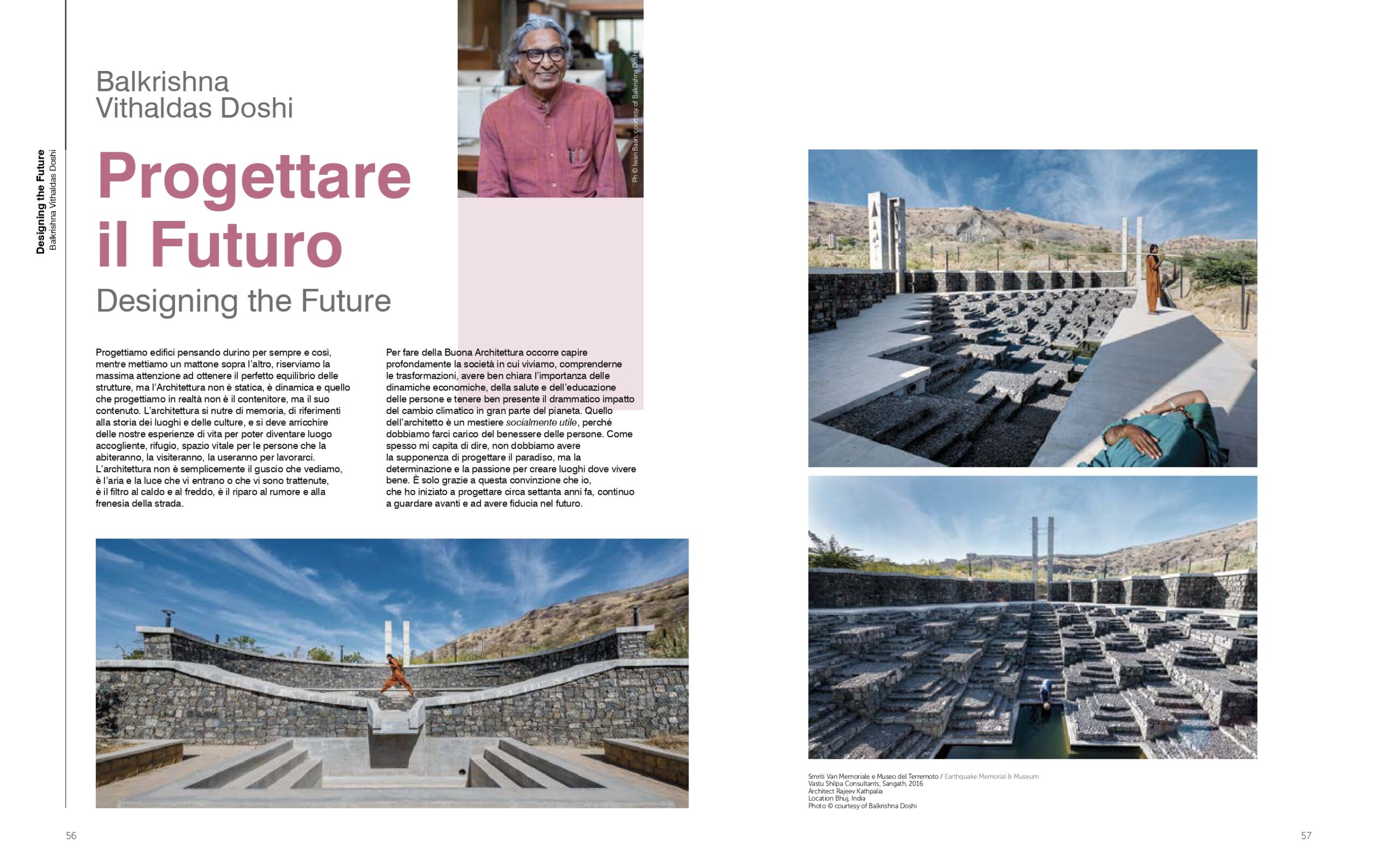 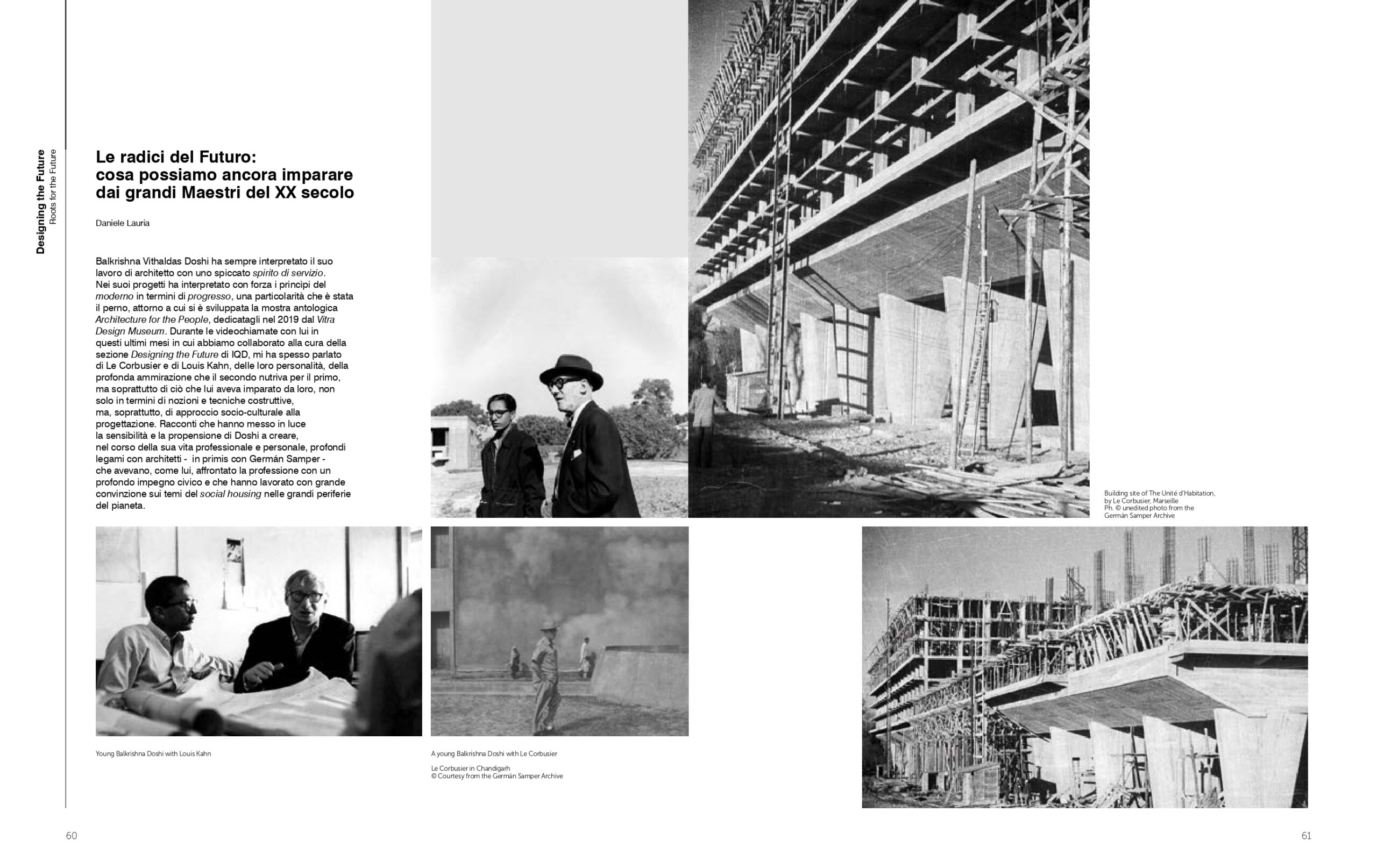 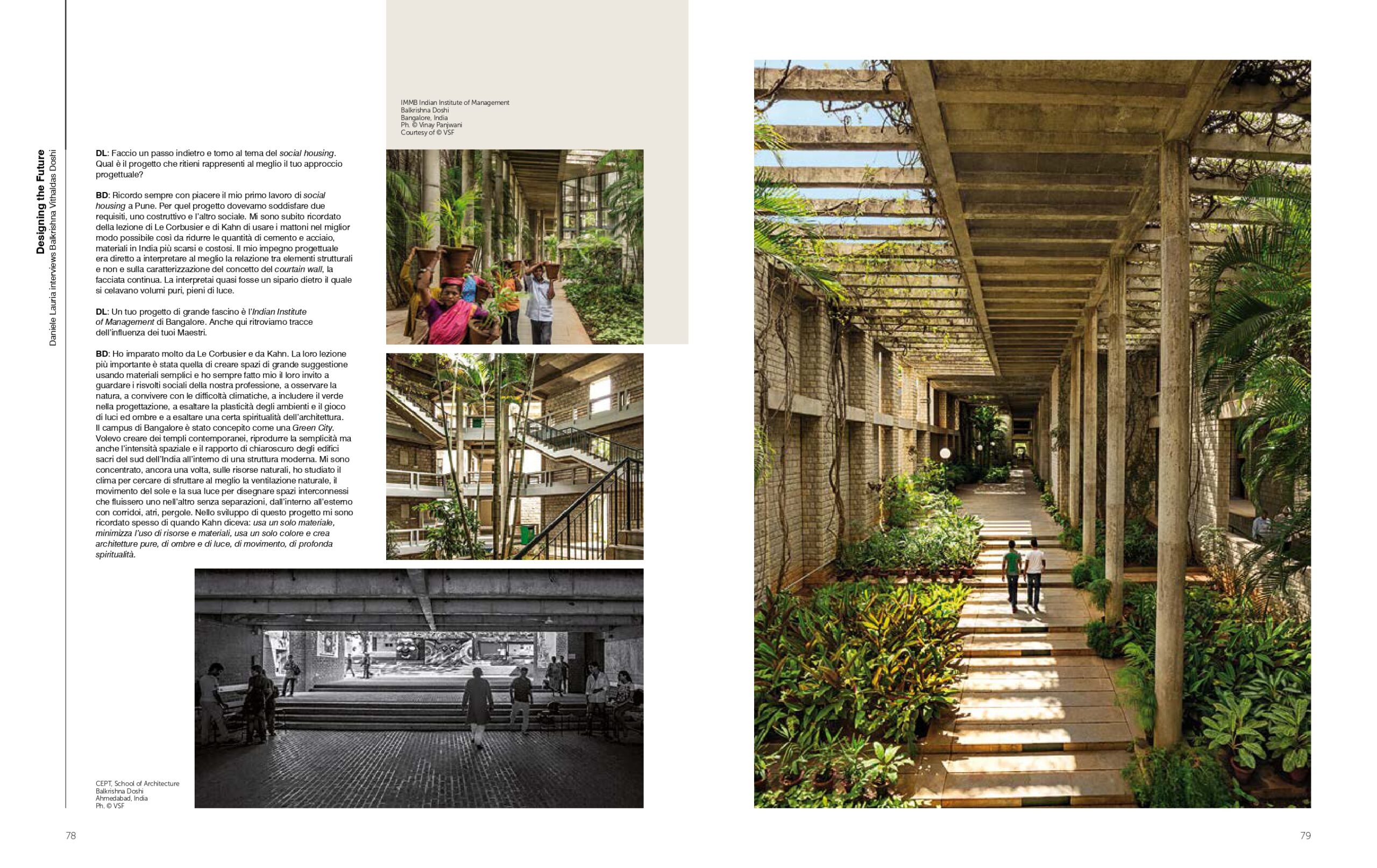 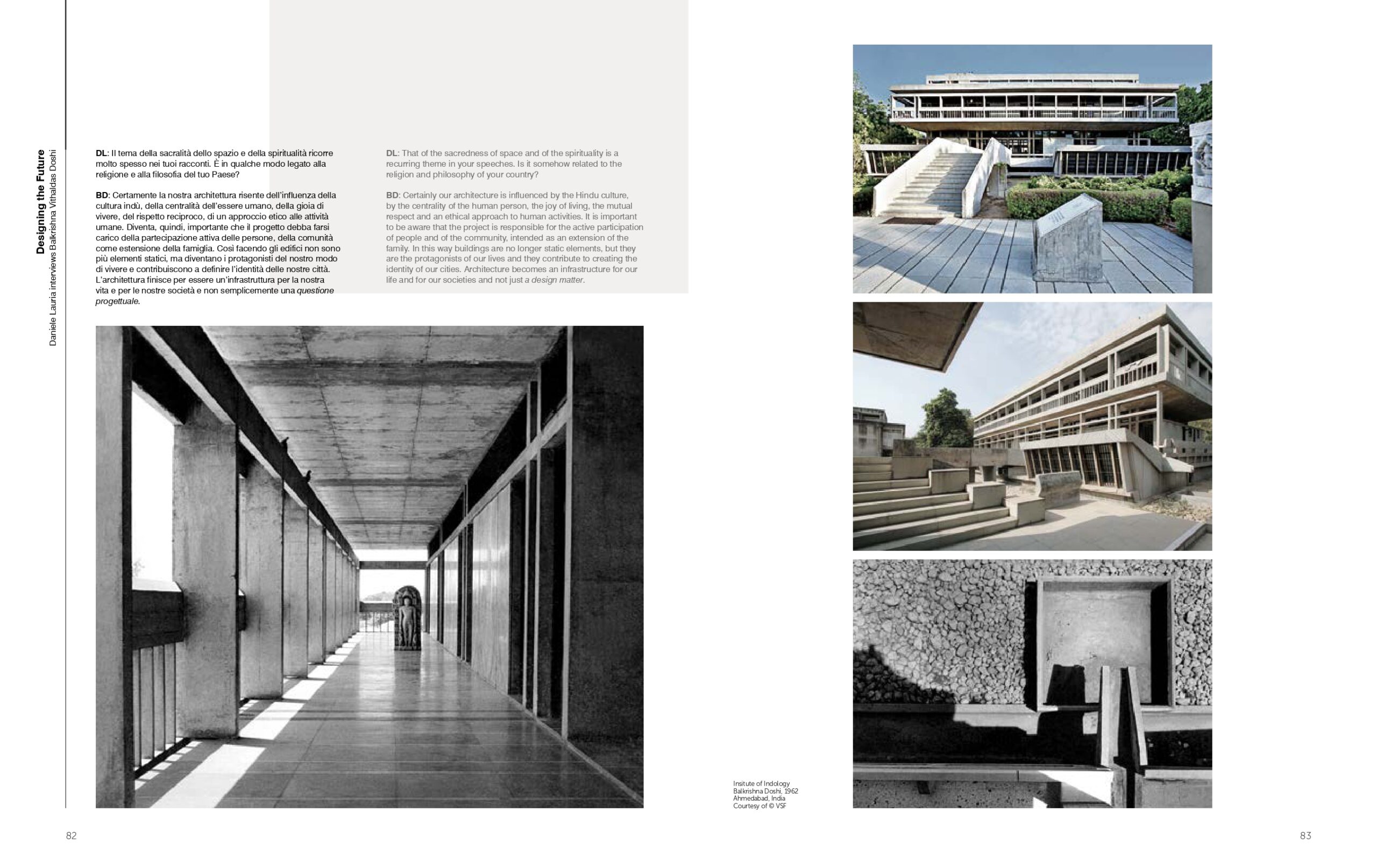